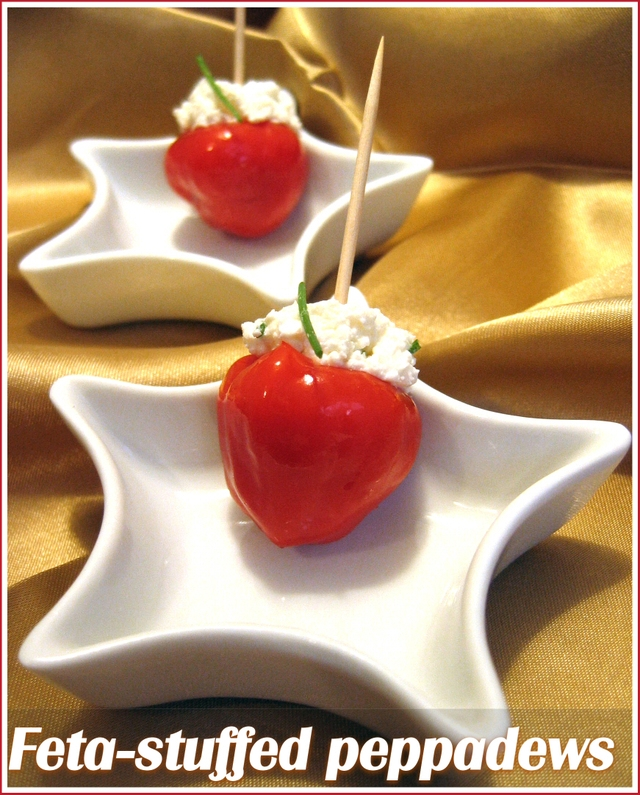 Is it just me or have the clocks speeded up considerably over the past month or two?  I just do not know where the time goes!  One minute you’re drinking champagne and singing Auld Lang Syne, the next it’s already knocking on the door of June and you are meant to be hosting Waiter, there’s something in my…, as well as packing a parcel for EBBP, trying to blog all the lovely food you’ve been cooking, holding down a job and trying to maintain a social life!  And did I mention that I have only been at home one weekend this month?  The others have been spent in Rome, Jersey and Arundel – and this weekend I’m off to Brussels.  Great fun, but there us no way my blogging can keep up with my life!!  So apologies in advance if this post is not one of my usual marathons…

I had big plans for this month’s WTSIM – I thought of making a whole meal of stuffed fruit and veg – starters, mains and desserts.  But when it came down to the end of the month, not only was my fridge pretty bare because of all the travelling, but I also had no husband to cook for as he has been sent to Brussels by his company for a month.  So I laughed off my ambitious plans and pondered what I could whip up to spoil myself on an unseasonally rainy Monday night.  I have been spending a lot of time lately pondering ideas for canapés.  I have said before that I am not 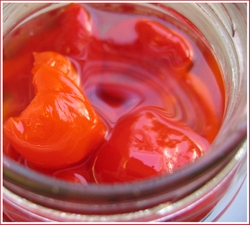 a canapé girl – making dinky little things that require assembly does not come naturally to me, so I have to spend a lot of time waiting for inspiration to strike.  But one of the ideas that kept surfacing was to make some sort of canapé involving peppadews. I have written about peppadews before – they were “discovered” in South Africa and so I have a particular soft spot for them.

I use the word “discovered” advisedly because there is some disagreement between the peppadew marketing machine and the scientific evidence.  The official company line has it that Johan Steenkamp, from the Eastern Cape province of South Africa, came across a chest-high bush of unidentified small round peppers in the garden of his holiday house.  These fruits turned out to be the 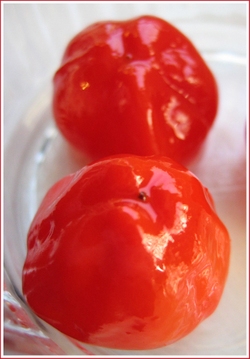 piquanté peppers for which the Peppadew company developed (and patented) a pickling process and voila – a star was born.  The peppers are often touted as the first new fruit to be introduced on the world market since the kiwi fruit and there is a perception that they are some sort of hybrid fruit (probably fuelled by the fact that they look like cherry tomatoes but taste like peppers!).  In truth, scientific tests have shown that these little peppers are probably unregistered members of the habanero family rather than a new species.  Have a look at the picture on the left – can’t you see the habanero family resemblance?

What is unique, though, is the process that was developed to pickle them.  For a start, the fruit are kept whole but completely deseeded, which takes down the heat a notch or ten.  They are then pickled with sugar, vinegar, salt and spices as well as ascorbic acid (Vitamin C) and calcium chloride, an additive which makes pickled products crisp. This means that the finished product retains its very vivid red colour, has no annoying seeds to be removed, and remains crisp and firm.  This crispness together with their single-mouthful size makes them the perfect canape receptacle – and that’s exactly what I did.  I chose a garlicky feta for my stuffing, but you could go pretty wild with fillings.  (The garlic paste is a new line of Italian products stocked by Tesco and it’s gorgeous – I spread it on crackers for a snack all by itself!   And the feta is a Turkish brand (I think?) that comes tinned in brine and I drag myself all the way to Wood Green to buy it because I love it so much.)  Whatever you choose as filling, however, I would suggest that you keep the spice in the filling to a minimum as even the mild peppadew peppers have a distict bite! Remove the 12 peppadews from their jar and allow to drain, cut side down, for a few minutes.

Mix the feta, cottage cheese and garlic paste together and stir in the chives and pepper.

Carefully fill each pepper with the cheese mixture – this is a lot easier than, say, stuffing piquillo peppers as the peppadew peppers remain firm and crisp.

Skewer each with a toothpick, garnish with chives and serve.

Other things to do with peppadews:
– peppadew & parmesan muffins
– biltong, blue cheese and peppadew quiche

This, if you hadn’t guessed, was my entry for Waiter, there’s something in my… #5.  I am ploughing through the roundup as we speak, so if you desperately want to enter but missed the deadline, send me your entry ASAP and I will still accept it until the roundup is actually published.