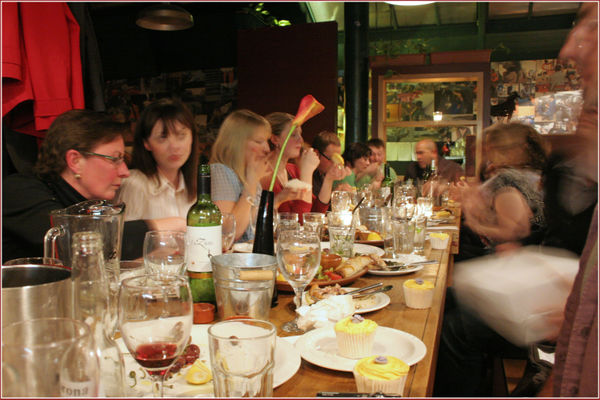 Hands up – who likes being stood up?

Hmm, not exactly a sea of hands, is it…  And I can guarantee you my hand is not among them.  Why do I ask?  Well, only because I was recently stood up.  A certain food blogger, clearly Far More Important than me, recently e-mailed me out of the blue to say that they would be in town and owed me a drink for something I helped out with last year – could we meet on Tuesday?  Johanna had also  been invited, so the two of us checked our calendars, made some rearrangements and accepted the invitation.  The only things we suggested were to make the drinks fairly early as I had dinner plans, and we suggested an alternative venue nearby.  And then… nothing.  Nada. Zip.  The weekend came and went, as did Monday… and Tuesday.  Not a word.  Not even “oh, sorry, I just realised I’m double booked”.  Just silence.  On Wednesday I e-mailed to ask if everything was OK.  More silence.  I might have been worried, had it not been for the fact that said blogger was still blogging, so obviously not face down in a ditch or anything… just not in a mood to meet up with us, or make apologies.  Nice.

So I was quite pleased last week when a lot of other food bloggers were willing to make the effort to keep a date to meet up.  Kind of restores your faith in human nature…

The occasion was the inaugural TrustedPlaces-sponsored food and wine blogger meet, organised by the lovely Walid and Niamh of Eat Like a Girl (now also working for TrustedPlaces – you go girl!).  The venue that they had chosen was Cantaloupe in trendy Shoreditch.  (For pictures of the evening, see my Flickr album.)

It’s always a little surreal meeting people for the first time in real life that you’ve had long online conversations with.  It’s like meeting a stranger that you already know 😉  I started the evening off with two of my favourite wine bloggers, Andrew from Spittoon and Rob from The Wine Conversation but it wasn’t long before Walid came over and said “there are two ladies here who’d love to meet you”.  I recognised Julia from A Slice of Cherry Pie almost immediately, and chatting to her was the equally lovely Helen from Food Stories.  Great to finally meet both of you!  Not long after that, Krista from Londondelicious introduced me to Simon from Dos Hermanos and we chatted about his recent trip to South Africa. I can’t wait to read his account of this section of his Eat The Globe project!  Chatting to Simon was Chris from Cheese and Biscuits, another blogger that I’ve been reading for a while but had not met, and who is as perfectly charming.

I started off the evening sitting between Niamh (who should, incidentally, offer prizes to non-Irish people who correctly guess how to pronounce her name!) and Douglas from Intoxicating Prose, but later moved on to long conversation with two charming Americans now blogging in London:  Denise from Wine Sleuth, and the lovely Annemarie from Ambrosia and Nectar, who I’ve been reading for ages.  And apologies to Laura from Kittens in the Kitchen to whom I only chatted for about 30 seconds – next time we’ll chat properly!

But enough of that – on to the food!  Cantaloupe was reputedly the first bar in the now-trendy Shoreditch area in east London and the vibe is definitely relaxed and laid back.  The long wooden tables and sharing platters of food seem to invite conversation and the bloggers were happy to oblige.  The menu is officially Spanish tapas, but seems to make a turn in all sorts of ports along the Mediterranean as well.  One of our platters was made up of chorizo, jamon and Spanish cheese; another featured calamari rings, spicy chicken wings, albondigas and rather delicious filled tortillas; while a third featured distinctly Middle-Eastern dishes like dolmades, tzatziki and wonderful stuffed mushrooms. Everything I ate was delicious, particularly the tortillas and the mushrooms. The wine list features all things Spanish and South American and is handily divided into wine styles rather than cultivars or countries. The wine we had (I believe it was a Fuzion Tempranillo Malbec blend from Argentina) was perfectly pleasant and inexpensive.  (Refreshingly, there is nothing over 40GBP on the wine list, other than french champagne!).

To finish off our meal, we had some dessert from another source – Fair Cake.  This London-based company will make and deliver their wonderful cupcakes to your door (within the M25). But be warned – they are so popular that small orders of cupcakes are fully booked until 20 November!  And with flavours like mocha, orange flower with lavender, dark chocolate, or white chocolate with berries, it’s not hard to see why! Both the chocolate and the vanilla that I tried were moist and delicious – if you have a festive party coming up that needs cupcakes for dessert, I’d go with these guys 🙂

After that, things got a bit hazy, which is probably the fault of the delicious but lethal fresh strawberry and unspecified alcohol shots!!  But refusing would have been churlish, so down the hatch they went and my memory followed close on their heels.  Probably for the best that I accompanied Andrew when he left to catch his train as I have heard rumours of sambucca later…!

Thanks again to Niamh and Walid for organising – it really is great to meet face to face with the people you spend so much time with on-line, and it’s wonderful to see how London’s food and wine blogging scene continues to go from strength to strength.  When’s the next one?