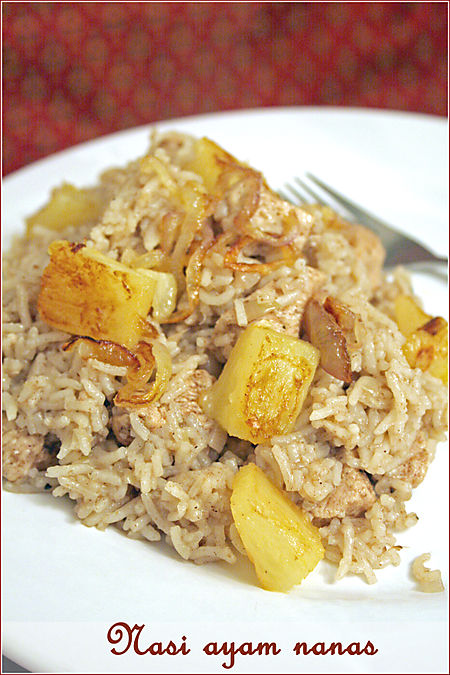 Before this edition of Waiter, There’s Something in My… (the monthly event that I co-host with my buddies Andrew and Johanna), Andrew asked me to help him choose between two themes.  I chose one… he went for the other.

Clearly my opinion is highly valued over at chez SpittoonExtra!

When he announced the “something vaguely Indonesian” theme, I will admit that my heart sank.  What do I know about Indonesian cuisine?  What crazy ingredients will I have to buy?  Why didn’t he listen to me and go with the other theme??

But, being a good WTSIMer, I started doing some internet research on what I could make.  The first thing I discovered is that “Indonesian” encompasses a rather diverse collection of people, places and cultures.  The Republic of Indonesia consists of 17,508 islands and is the world’s largest archpelagic state (it’s also the world’s fourth most populous nation and the largest Muslim-majority nation).  Indonesian history and culture has been greatly influenced by foreign powers drawn to its natural resources.  Muslim traders brought Islam to the islands and European nations fought each other to monopolise the spice-producing islands.  In the end, the Dutch won and were a colonial power for three and a half centuries, until Indonesia’s independence after World War II.  This diversity is also reflected in the cuisine  which is based on Chinese, European, Middle-Eastern and Indian heritage.

The second thing I noticed was a certain familiarity in the sound of the Indonesian dishes.   Partly it was the familiarity of individual dishes:  nasi goreng (a spicy fried rice dish often served at banquets and popular as part of a rijsttafel in the Netherlands), sambals (spicy relishes) and atjar (pickled relish).  These are all dishes that I’ve seen served in South African restaurants and homes.  In fact, I’m sure in the 1980s The Homestead restaurant in the old Elizabeth Hotel in Port Elizabeth used to offer a rijsttafel at Sunday lunch, and my beloved South African Nice ‘n Spicy make a nasi goreng spice kit!  But it was not so much the individual dishes that sounded familiar – it was the structure of the words:  goreng, kentang, redang.  Compare these to the Afrikaans words blatjang, piesang, piering, and kaaings.  See the similarity?

And you don’t have to look too far to find the reason.  The Dutch East India Company were a powerful force in the Netherlands in the 17th century.  They were in essence the first multinational corporation in the world and were granted extraordinary quasi-governmental powers by the Dutch government, to wage war, negotiate treaties, mint coins and establish colonies.  (Can you imagine private companies being authorised to do this today??) Initially their primary concern was the spice trade and therefore in the about 1620 they established their headquarters in Batavia – known today as Jakarta, the capital of Indonesia.  Thirty odd years later the Dutch East India Company established a refreshment station at the Cape of Good Hope – or modern-day Cape Town – which was the start of Dutch solonisation of South Africa.  To work in the kitchens, manpower was needed and the local population proved to be unwilling and impossible to train, so a number of slaves were brought from the Company’s other colonies, particularly Batavia.  It was these slaves (ancestors of today’s Cape Malays) who established the Muslim faith at the Cape and who brought with them the dishes of home, which is how I grew up familiar with Indonesian cooking, without ever having visited Indonesia.

Seeng as Andrew specifically said that nasi goreng was not exciting enough (picky, isn’t he?!), I couldn’t totally cheat and make Nice ‘n Spicy nasi goreng and I ended up searching through various (generally excellent) Indonesian recipe sites.  I have to admit that in the end, the dish I chose was chosen because I had most of the spices already and didn’t have to go on a major shopping expedition (mea culpa!).  I’m off to Chicago for 2 weeks on Saturday and don’t need a cupboard full of half-used exotic ingredients!  But I was so, so happy with the dish I chose.  I was still not feeling well when I made it but the dish was dead simple to make, plus the combination of spices was gently warming and the starchy goodness was tremendously comforting.  The recipe I used is from Merry’s Kitchen of Indonesian Cuisine which is a great site and well worth a visit if you want to get into Indonesian cooking. Blend all seasoning ingredients except cloves and lemongrass with a mortar and a pestle or a food processor to form a paste.

Heat the oil in a wok or heavy saucepan over medium high heat and then add blended seasonings and the rest of the seasoning ingredients and stir fry it for 2-3 minutes.  Add the chicken and continue stir frying for about 3 minutes.  Add chicken stock and salt and simmer until the chicken is tender.  (If you are using stock cubes as opposed to home-made stock, go easy on the salt as the stock will be salty!)

Strain the stock and set aside the chicken pieces.  Place rice in a heavy stockpot, add 2½ cups of the reserved chicken stock and bring to a boil.  Cover the pan and simmer until the rice is almost cooked and the liquid absorbed.

Add the diced chicken and cook over low heat until the rice is thoroughly cooked.

Using the empty pan that you used to fry the chicken, add 1 Tbsp of butter and melt it over medium heat.  Then add the pineapple and sliced shallots and allow to caramelise slowly – this will take abotu 7-10 minutes.  Turn as necessary but make sure the shallots are nicely caramelised and almost crispy before you remove them, and that the pineapple has a good colour.

Serve the rice garnished with the fried shallots and pineapple pieces.

Gifts from the Kitchen

Looking for more recipes featuring pineapples?  Why not try: