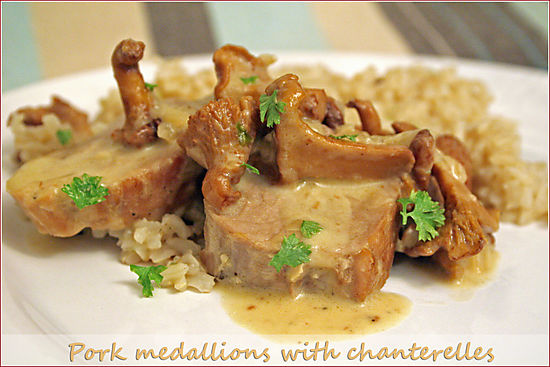 Do you remember your first time?

The anticipation?  The excitement? The way everybody seemed to know all about it except you?

I remember it well – because my first time was only last week!

My first time cooking with chanterelle mushrooms, that is.  What did you think I was talking about? :o)

In a way, I guess it was fate.  On our drive back from Austria last summer, we stopped off in Heidelberg.  Now if I’d known Charlotte lived in the vicinity, I would most certainly have paid her a visit but, alas, I didn’t and so we wandered the streets of the old town in search of supper. I was struck by the number of places offering special seasonal pfifferling (the German name for chanterelles) menus.  Of course, I had to try some and I was instantly hooked.  The meaty texture, the intensely mushroomy flavour – what’s not to like??  Well, the price, as I discovered when I got back to England.  One of the few places where you can be pretty sure to find them is Borough Market, and there they on sale last week for £16 per kilo!  So sadly my new-found love remained unrequited for a while, until we visited the Oktoberfest in Munich last weekend.  Most people come home from Oktoberfest with a silly hat, a gingerbread heart, a large beer mug and a hangover.

Me?  I came home with a bag of fresh chanterelles.

Chanterelles are members of the fungi kingdom and the correct name for the most commonly eaten species, the golden chanterelle, is the Cantherellus Cibarius. (California is also home to the white chanterelle or Cantherellus Subalbidus, which some people believe to have a superior flavour.)  Like truffles, they are micorrhizal, meaning that they form symbiotic relationships with the roots of a particular host plant.  This means that when looking for wild chanterelles, your chances will be better if you look under conifers, live oak (in California) or silver birch (in Scotland).  The mushrooms do not look much like “textbook” mushrooms (e.g. button mushrooms), but are yellow and funnel-shaped, with gills extending almost the entire way down the stem.  Unlike button mushrooms, there is no division between the cap and the stem, and the cap tends to curl up at the edges rather than down.  They have a rather distinct aroma which some people have likened to apricots, but to me it’s just intensely mushroomy and quite delicious.

A word of warning, though.  Golden chanterelles can fairly easily be confused with Jack O’ Lantern mushrooms which are also orange-yellow and have a similar shape.  You don’t want to be sauteeing these babies, unless you feel like a bout of violent cramps, diarrhoea and projectile vomiting.  Nice.

Anyway, given my lack of experience in the foraging department (see my elderberry post for details!), I went for the safer option of buying 250g of fresh chanterelles at Munich’s wonderful Viktualienmarkt – for €2.50!  Now that sounds a lot better than £16 per kilo…

My only remaining dilemma was what to make with them.  I wanted to make something that would let the flavour of the mushrooms shine through rather than sideline it, so in the end I opted to pair them with pork in a creamy sauce, slightly adapting this recipe from Steffen’s Dinners (a site that’s well worth a visit if you’re looking for great recipes, btw) to suit what I had on hand.  The recipe was quick and easy and the taste was a perfect pairing, with the pork being the perfect foil for the flavoursome mushrooms. (And if you don’t eat pork, chicken breast fillets would work just as well in this recipe.)  I served mine with brown rice and a stir-fry of French beans, sugar snap peas and red bell pepper.

And would you know – our dinner guests Belinda and Andrew blushingly admitted that it was their first time too. With chanterelles, of course 🙂 In a mortar puree 1 clove of garlic with 1 tsp of coarse salt.  Rub the pork loin with the resulting puree and season with freshly ground pepper.

Heat a heavy, oven-proof pan or dish over medium-high heat (I used my trusty round Le Creuset Dutch oven and cut the loin into two to make it fit).  Add oil and sear the pork loin from all sides until nicely browned. Remove the meat from pan and set aside.

Reduce heat to medium. Add 1 Tbsp of butter, add onions and cook until soft and translucent. Add chopped garlic and cook for another minute or two.

Add chanterelle mushrooms and salt to the pan and cook for about 10 minutes, without covering.  Add the pale sherry and the pork loin. Transfer the dish/pan to preheated oven.  I put the lid on my pot for about half the cooking time, then removed it.  Cook until tenderloins are firm to the touch, about 20-30 minutes.  Remove the dish from oven, remove and wrap tenderloins in aluminum foil and set aside.

Over low-to-medium heat, cook mushrooms until most of the liquid has evaporated.  Stir in sour cream, whipping cream and butter. Add chopped parsley. Season with salt and pepper.

Cut tenderloins into thick slices.  Add them back into the chanterelle sauce to heat through and then serve over rice or noodles.

I am submitting this recipe to the lovely Haalo of Cook (almost) Anything At Least Once who is this weekend’s hostess with the mostest for Kalyn’s weekly event Weekend Herb Blogging.  Do check Haalo’s beautiful site for the roundup later this week!

Niamh of Eat Like a Girl made leeak and chanterelle frittata

Ilva from Lucullian Delights made chanterelle-filled zucchini with thyme