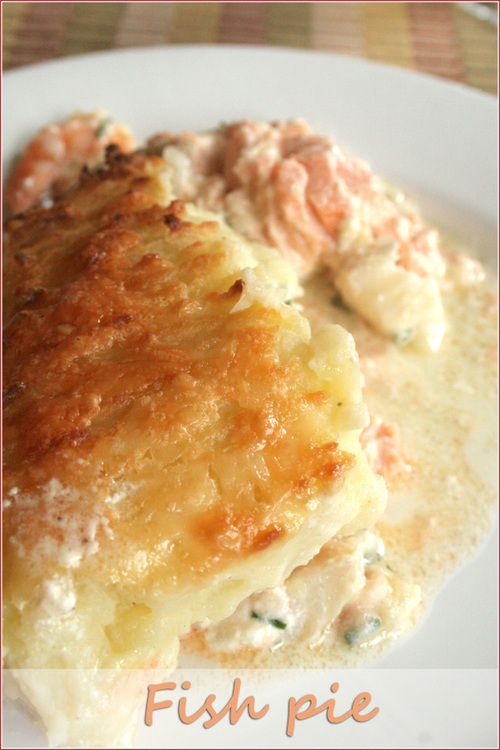 Well, it seems I spoke too soon.

After lying in the sun last Sunday, braaing (BBQing) last Sunday night, and after my lovely summery salad last weekend, the temperatures have plummeted and I’m back to woolly socks and hot chocolate. So it seems that either:

a) summer has been delayed (probably got its luggage lost at Heathrow’s Terminal 5!); or

b) last weekend was this year’s allocation of summer – hope you enjoyed it!

Nothing for it then but to turn to something warm and comforting to eat.  And I have to say that there are few things as comforting as food in a creamy sauce.  All the ingredients are there for warmth, a little self-indulgence and a deep sense of contentment.  One case in point is the delicious smoked haddock with flageolets and mustard that I often make, and another perfect example of comfort on a plate is traditional fish pie.

When I first arrived in England, I imagined fish pie to be just like a chicken pie, only fishy – in other words, fish encased in some sort of flaky pastry – and historically, fish pies did indeed have a pastry lid.  The Romans were very fond of fish and on Fridays, fish was eaten in celebration of the goddess Venus.  But even after the departure of the Romans from these shores, fish gained popularity as Christianity grew and adopted numerous fasting days when meat was outlawed but fish was allowed.  Especially during the forty days of Lent, this could be a trial, so a number of special fish dishes and pies were invented by enterprising cooks.  It seems the Medieval palate took a far more relaxed attitude to the mingling of sweet and savoury flavours, because some pies included a mix of seafood cooked with rosewater, spices, wine and sugar.  There are mentions of mackerel and gooseberry pie; a cod pie with pears and crystallised lemon peel in 1649; and Yorkshire herring pies with apples and potatoes.  For special occasions the pastry lid could even be covered in icing and crystallised fruits! 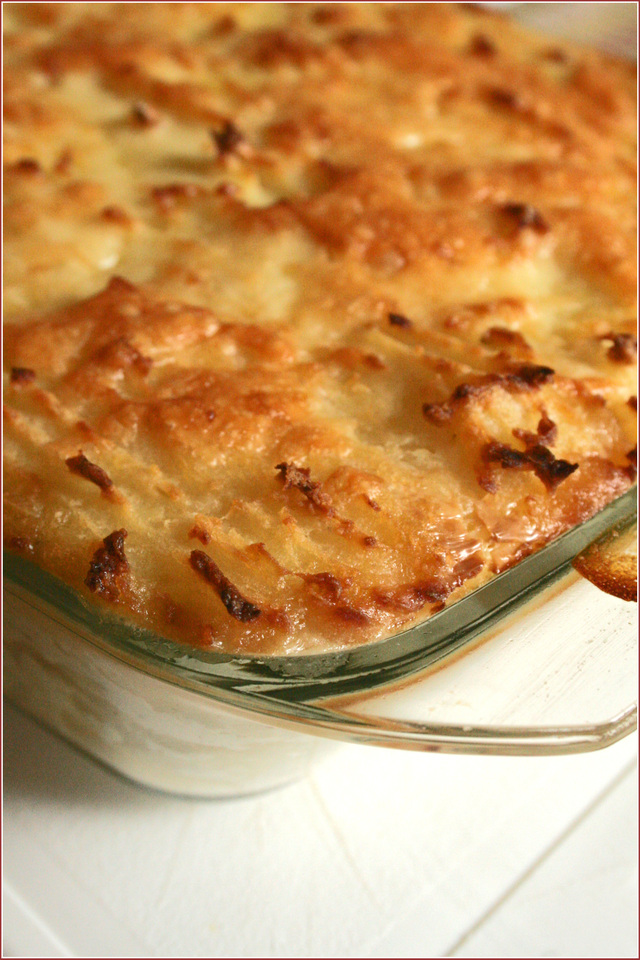 One suspects that these combinations might not have been altogether successful as none of them seem to have survived (or at least I haven’t encountered any).  What did happen is that in areas where smoked fish was common, potatoes were almost always added to the fish pie to take the edge off the saltiness of the fish and, over time, the pastry lid traded places with a “lid” of mashed potato to give us the fish pie we know today.  One of the best things about fish pie is that you can make it as posh or as simple as you like.  Keeping it simple, you can limit yourself to two types of fish; but when guests come, you can add all manner of exotic seafood.  It’s also possible to add peas or other vegetables to the pie or the potato topping, making this a successful one-pot dish (although I prefer to serve mine with lemon-thyme peas on the side).  The choice is yours – and I guarantee you will feel better about the lack of summer weather once you’ve had a taste. 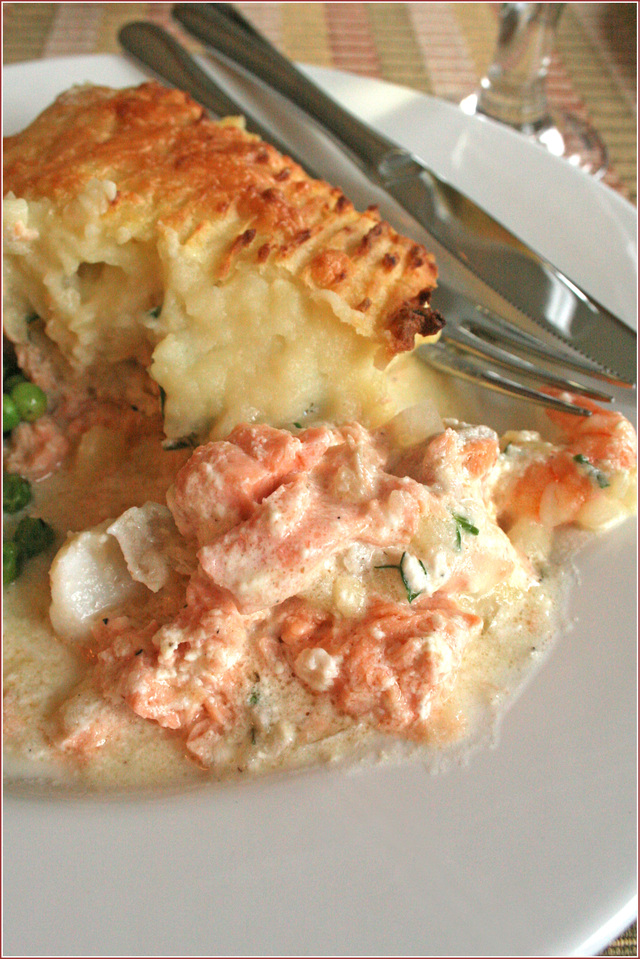 Peel and boil the potatoes.

Remove the skin from the fish (if necessary) and cut into 3cm chunks.  In a large saucepan, mix 350ml of the milk, the cream, wine, bay leaf and peppercorns and bring to the boil.  Simmer gently for 8-10 minutes.  Remove from heat and transfer the fish chunks onto a plate to drain.  Strain and reserve the liquid, and scatter the cooked fish as well as the prawns over the base of a large, shallow oven-proof dish.

In a clean saucepan, melt 50g of the butter, add the flour and mix well.  Cook for 1 minute, then remove from the heat.  Gradually add the cooking liquid from the fish, whisking it in a little at a time and then return to the heat.  Bring gently to the boil and allow to simmer gently for 10 minutes.

Remove from the heat, season with salt and pepper and stir in the chopped dill and chives.  Pour over the fish in the shallow dish.  Pre-heat the oven to 200C.

Mash the potatoes together with the remaining butter and milk to form a smooth, creamy mash.  Spread over the fish in the oven-proof dish so that it covers the fish completely – you can score patterns in the mash with a fork if you feel so inclined.  Sprinkle the grated cheese over the mash.  Bake uncovered at 200C for about 35 minutes until nicely browned and bubbling.

Serve with steamed green beans or minted peas (or, in my case) lemon thyme peas and a full-bodied white wine.