The older I get, the more I envy people who can look dispassionately at all the things they have accumulated… and one day decide to ditch them all – or at least, a large proportion of them.

A good friend of mine who I knew at university and who had always said that what he really wanted to do was go sailing, recently did just what he said he was going to do:  he went sailing.  But I don’t mean a little recreational weekend boating on the local lake.  Oh no, not Neil.  He waited until he had a wife, two kids, a house, his own business and all the things that the rest of us would think make up a pretty good life.  And when he went sailing, he bought a boat with the intention that all four of them would live aboard for at least two years while they traveled the globe.  Which necessitated getting rid of all the abovementioned accumulated stuff – even most of the kids’ toys.  Now he sends me periodic e-mail updates: “Venezuela is awesome!” or “Just setting sail for the Galapagos Islands now!”, just in case I didn’t feel like enough of an underachiever 😉

Or take Paul, who sold his apartment and used the money to buy a plot and build his own house.  While the building was going on, there was obviously nowhere for all his furniture and other worldly possessions to go, so he bought a big shipping container, fitted it with multiple security mechanisms and locked everything in there on his plot, pending the completion of the house.  In the intervening couple of years he was working here in Europe and had accumulated, at the very least, a new wardrobe and enough computer books to keep him happy.  And one day he realised that he had lived very well, thank you, for two years without his container full of possessions so he gave it all away, other than a couple of paintings and books.  Did the world stop turning?  No – and he no longer has to worry about anything happening to his container full of stuff.

I hear these stories and I gaze wistfully around my house.  We have only been here 8 years and we arrived in this house with one suitcase each and a box full of borrowed cooking utensils.   We rented it furnished so you’d think we would not have accumulated much stuff.  And you’d be thinking wrong.  Sometimes I feel as if I’m merely a servant in the house and that the real boss is Our Stuff – it demands care and cleaning and sorting, and sometimes I think I can almost see my way clear to doing a Neil/Paul maneuver.  Look at all those toiletries you don’t need! Look at all those clothes you don’t wear!  Look at all those recipe books you’ve (ahem) never used! 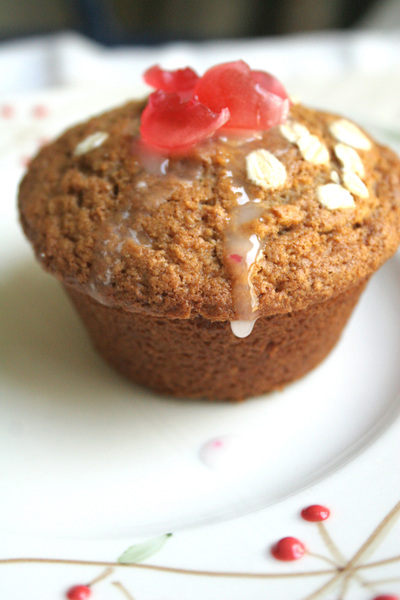 Then The Book People pay a visit to my employer’s cafeteria and bring a selection of great discounted cookbooks with them.  And one look at Muffins Galore is enough to send me reaching for my wallet.  This one will be different, won’t it?  I mean, I’m not buying it for the pictures, I actually do make muffins.  And there are so many lovely recipes…  And as I walk back to my office with my purchase tucked under my arm, all aglow with muffin-making happiness, I see Neil’s yacht pulling further and further away from me, and slipping over the horizon.

One of the things that sold me on the book was the great section on healthy muffin recipes – ones featuring wholegrain flour, oats and bran rather than chocolate chips and caramel!  Because it uses only one egg, no butter/margarine and both oats and wholegrain flour, I’m submitting this recipe as my contribution to this month’s brunch-themed Heart of the Matter event, hosted by my friend Joanna of Joanna’s Food.  If you have a heart-healthy breakfast or brunch recipe that you’d like to have included in the roundup, submit it to Joanna by midnight tonight!

Other muffins on CookSister! include: Preheat oven to 190C.  Grease 10 cups of a standard 12-cup muffin tin.  Alternatively, line the 10 cups with paper muffin cases.  Next time, I will do the latter as two of my muffins totally lost their tops when I tried to coax them out of the pan!

Put the oats in a medium-sized bowl and pour over the mil and vanilla extract.  Stir briefly, then set aside and soak for 10 minutes.

Mix the flour, baking powder, salt and muscovado sugar in a large bowl.  Add half the chopped cherries to the flour mixture. Stir the egg and sunflower oil into the oat mixture.  Make a well in the centre of the dry ingredients and pour in the oat mixture.  Mix briefly until just combined.

Divide the batter equally among the prepared muffin cups.  Bake in the oven for about 20 mins or until a skewer inserted into the centre of a muffin comes out clean.  Muffins should be well-risen and firm.  Coll in the tin for 5 minutes (no longer!), then turn out onto a wire rack and leave to cool completely.

Blend the icing sugar with 2 tsp warm water in a small bowl to make an almost transparent, thin, smooth icing.  Stir in the remaining dried cherries.  Spoon some of the icing over each muffin and allow the icing to set before serving.

NOTES: If you are using plain wholegrain flour like me, add an extra 3tsp baking powder.  I also found the icing pretty but unnecessary, so next time I would rather put all the chopped cherries into the batter and leave out the icing step altogether. 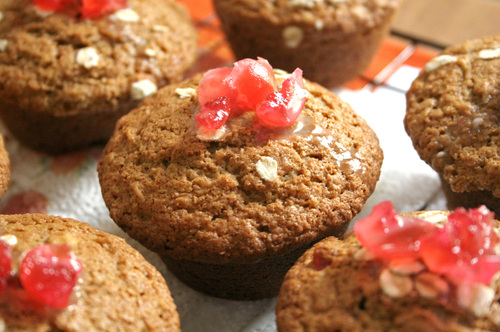 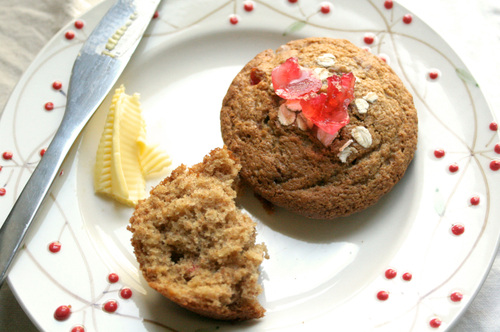 Seeing as I am a judge this month, I can’t enter Snackshots, hosted my Michelle at the Greedy Gourmet, but this seems as good a time as any to remind you that the theme this month is… muffins (what else?!).  Get your entries to Michelle by 6 May.