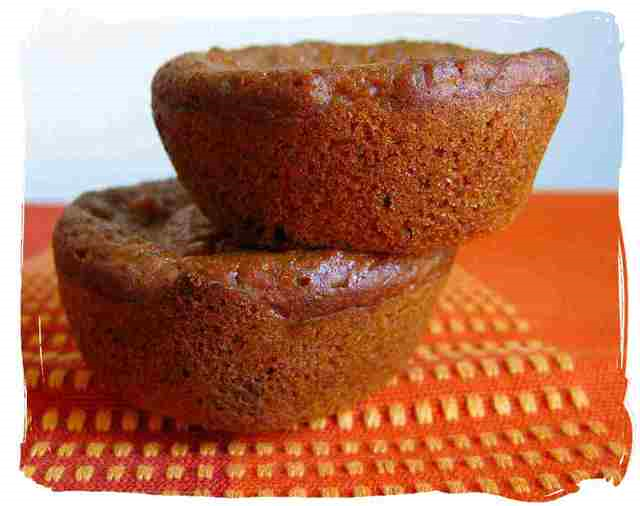 As I mentioned in a previous post, one of the last blogging events in which I participated before heading off on holiday was the second edition of the wonderful Euro Blogging By Post, organised by our very own Andrew.  Andrew’s brief to participants was to include a store-cupboard ingredient, and to include something with an Autumnal flavour.  I did rack my brain to try and find one item that would fulfil both criteria, but in the end I gave up and settled on capers as my store cupboard ingredient. I always have capers in my cupboard or my fridge – they are great in pasta sauces, on pizzas, to add zing to potato salad, and in one of my new favourite dishes: pork medallions in a creamy mustard and caper sauce.

The autumnal ingredient was causing me more deliberation.  Squash of some sort?  Something spicy and warming??  And then I remembered that I had a few sweet potatoes lying around that needed using up and an idea was born – spicy, autumnal sweet potato muffins!

Sweet potatoes are one of those rare foods that not only taste good but are really good for you! This site has a breakdown of all their nutrients.  Sweet potatoes are native to the tropical North and South Americas and are now grown throughout the temperate world (because the sweet potato plant can’t tolerate frost).  China accounts for over 83% of the world’s harvest (mostly used for pig feed!), but per capita production is highest in countries where sweet potatoes are a staple of human consumption.  The Solomon Islands, for example, produce an astonishing 160kg per person per year!!  Things you didn’t know you didn’t know.  For these and other fascinating sweet potato facts, check out their Wikipedia entry.  There are two main varieties:  the starchy, off-white fleshed variety (which I most often encountered in South Africa) and the moist-fleshed orange cultivars (which I mostly find here in the UK – imported from the USA, so much for limiting food miles. Mea culpa.)  There is no significant difference, except when you are using them as ingredients in baked goods where the moisture content can make a significant difference to the end product.  Ooops.  Ah well, fools rush in where chefs fear to tread. 😉

In a large mixing bowl with hand-held electric mixer on medium speed, beat butter and sugar until light and fluffy. Beat in egg and vanilla until well blended.

Stir into the butter mixture alternately with milk, mixing just until dry ingredients are moistened. Stir in sweet potato and chopped nuts.

Spoon batter into greased muffin cups, filling about 2/3 full. Bake at 375°F for 25 to 30 minutes, or until the centre of each muffin springs back when pressed with a fingertip.

Cool in the pan on rack for 5 minutes. Remove from pan and serve muffins warm. Makes about 1 dozen sweet potato muffins.

[Notes:  I made these as mini-muffins for easy packing to send to Mia, and I don’t know if it was the smallness of the muffin tins or the fact that I used a home-made baking powder from cream of tartar and bicarb, or the fact that I don’t own an electric blender in this country (!)… but either way, I can’t say that the muffins exactly rose beyond the rim of the muffin tins 🙁  There is also the issue that a) I didn’t read until after I’d made the muffins that the variety of sweet potato can affect the final product because of its moisture content and b) I used a little more grated sweet potato than the recipe demands.  I’d grated it, it was hard work and I wasn’t wasting it! Either way, the muffins weren’t really fluffy, but they did have a very appealing, nutty, spicy, cakey texture.  Warm with butter, they are heavenly. And you can convince yourself that they’re practically health food…!]