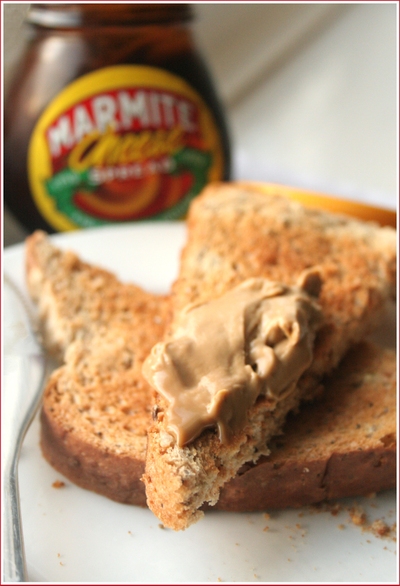 Growing up in Port Elizabeth (in our house anyway), your bread toppings included the following choices: peanut butter, golden syrup or apricot jam; and if you had a savoury tooth rather than a sweet one Anchovette, Melrose cheese spread, Marmite and Bovril. Some of the family liked Marmite (made from yeast extract left over after the beer brewing process), some preferred Bovril (a beef extract) – it was that simple. My dad always preferred Marmite (and lots of it!), while my mom, brother and I preferred the less aggressively yeasty taste of Bovril, but I didn’t mind Marmite. So if there was no Bovril, I’d quite happily have Marmite.

It was only when I arrived in England that I learned two things. Firstly, the English do not regard Bovril as a spread (well, they certainly don’t market it as one). When our first jar of Bovril ran out, I went to look for more and searched in vain up and down the spreads aisle of the local supermarket – no dice. I assumed that they must be of stock and left it on the shopping list for next time – when the futile exercise repeated itself. On the third visit, I asked a shop assistant, lamenting my previous two attempts. I thought I caught a funny look from him as he led me away from the spreads aisle… to where the stock cubes are kept. “There you go, Madam”, he said, pointing at row upon row of Bovril bottles. You see, in this country, Bovril is marketed as a beef stock, diluted with hot water to make bouillon. I’m sure that one of the old advertising campaigns on South African TV also had some girl winning her showjumping competition after a steaming mug of Bovril, which always struck me as a hideous idea for a snack – but it seems the English have never given up on the idea. Who would have known.

The other interesting that I learned was that there is a deep love-hate divide amongst the English about Marmite. You seldom hear somebody say “oh, it’s OK, but I don’t have it that often”. It’s either “Iloveitloveitloveitloveit!” and they buy Marmite T-shirts and novelty pens; or they pull faces and make retching noises at the mere mention of the word. Some don’t even want to smell it on their lover’s breath! The entire UK Marmite site is, in fact duplicated in “Love” and “Hate” versions. Astonishing. 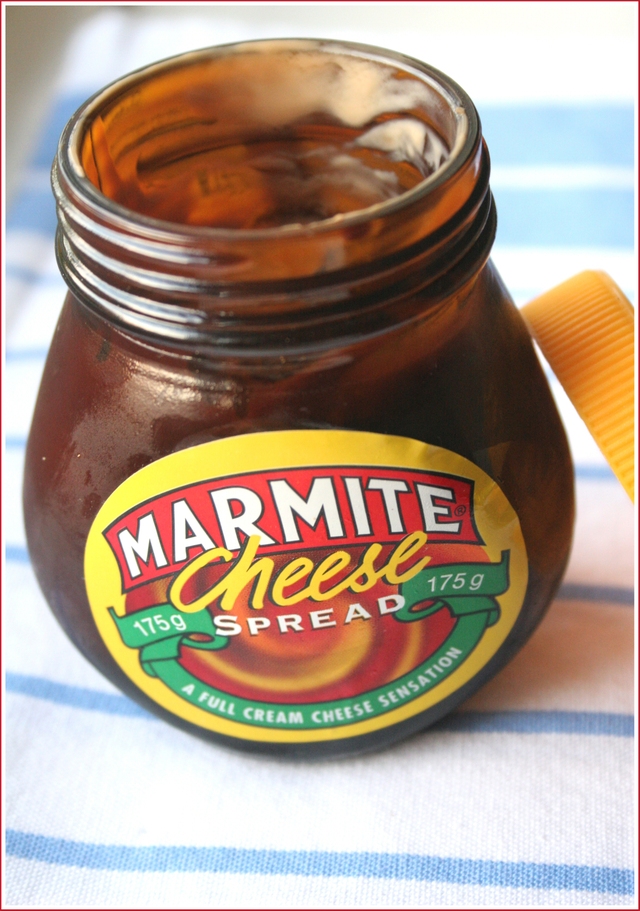 But I digress. On my recent trip to South Africa I did what I always do and wandered the aisles of a supermarket for a while, just to see what products had disappeared and what was new. What can I say – I’m a sad that way. One of the things that caught my eye and instantly entranced me was the bottle you see pictured above: limited edition Marmite cheese spread! One of the things I make sure I eat lots of when I go home is cheese spread – it’s not nearly as popular over here and even if it were, you wouldn’t get it in biltong flavour

Often I will spread a slice of toast with cheese spread and then spread a thin layer of Marmite on top, savouring the creaminess of the cheese and the sharp yeastiness of the Marmite. So this jar seemed to me to hold the promise of that taste sensation all in one happy package. I had to have it.

Having smuggled it back into the UK and sampled it last weekend, I can happily report that if you like cheese spread and like Marmite, you will like this. Granted, it’s not a beautiful colour – if anything, it looks like dulce du leche, but of course it tastes like cheese spread, with the kick of Marmite. Delicious. And when I did a little more research into Marmite Cheese (made by Unilever Bestfoods Robertsons) in South Africa, I discovered to my amazement that this appears to be a uniquely South African product. There is no mention of it on the UK site or anywhere else I can find on the Internet, leading me to believe that this is a South African original.

If you love cheese and Marmite, this could just be the ideal spread that you’ve been waiting for all your life.  If you hate Marmite, this is hell could be hell on Earth.  You decide 🙂