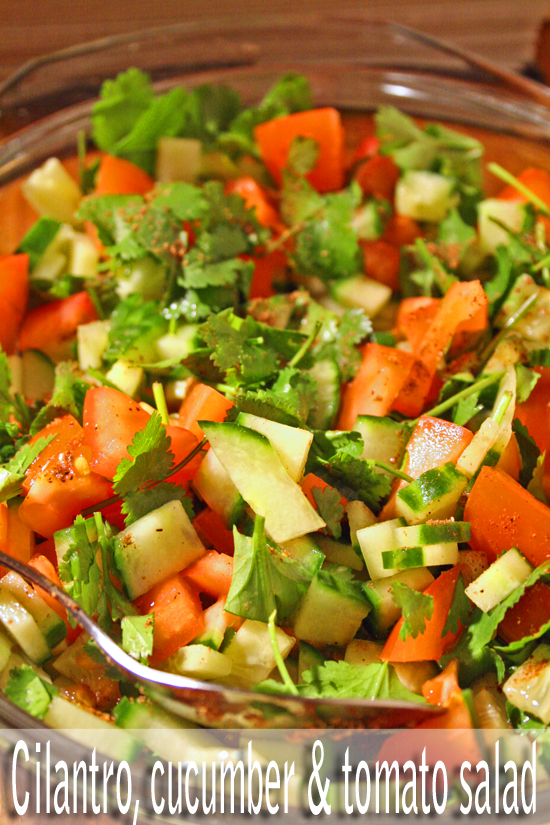 It seems that I am on a roll writing about love-it-or-hate-it foods.

Hands up – who likes fresh coriander leaves, a.k.a. cilantro?  I know I do – and Nick has repeatedly declared that fresh cilantro is his all-time favourite herb.  But as I have discovered, this is not an opinion shared by everyone – to the extent that there is an I Hate Cilantro site on the net, complete with anti-cilantro haikus.  Who would have known?  OK, so the taste is definitely strident (apparently the distinctive smell and taste, sometimes described as “soapy” or “fetid”, of fresh coriander leaves is due to the aldehyde in the leaves’ volatile oil) – but is that a reason to hate the whole plant?!

Cilantro (Coriandrum Sativum) is a member of the Apiaceae family of aromatic plants with hollow stems, together with parsley, anise, fennel, caraway, dill and cumin.  These are so closely related than an allergy to one will usually mean an allergy to all.  Both the seeds (usually dried) and the leaves (fresh or dried) are eaten and the leaves are variously called cilantro, coriander leaf, Chinese parsley and dhania.  A native of Eurasia , it was once apparently commonly used in European cuisine but has now almost totally disappeared, occurring only in dishes originating in foreign cuisines, particularly the cuisines of Asia and Mexico.  (The exception to this rule is Portugal, where cilantro still forms part of the indigenous cuisine.)  The leaves are rich in vitamin C, vitamin A, the B vitamin riboflavin and dietary fibre.

Cilantro/coriander has also been used as a medicine for almost as long as a culinary ingredient:  the ancient Egyptians were among the first to use it as such. The Greeks and Romans used crushed coriander leaves to treat ulcers and rheumatism, while both the Chinese and the Greeks believed cilantro to have aphrodisiac properties.  There are even suggestions that cilantro may assist in the removal of heavy metals from the body via a process known as chelation.

As for me, I don’t eat cilantro for my health – like Nick, I eat it because I love the taste – and it seems I’m not alone.  In the Weekend Herb Blogging one year anniversary edition last year, readers voted cilantro to be their favourite herb (although it did get knocked off its perch by basil this year).  But whatever the public says, it will always be a favourite in my house.

Dice the tomato and cucumber into small cubes.  Wash the cilantro, remove the leaves from the stems.  Mix the vegetables in a bowl before adding the vinegar and garam masala and mixing.

This refreshing salad is excellent with curries, such as the chicken biryani I made last week!

I’m submitting this post as my entry to this week’s Weekend Herb Blogging, kindly hosted by The Expatriates Kitchen – send your entries to Beth by Sunday.