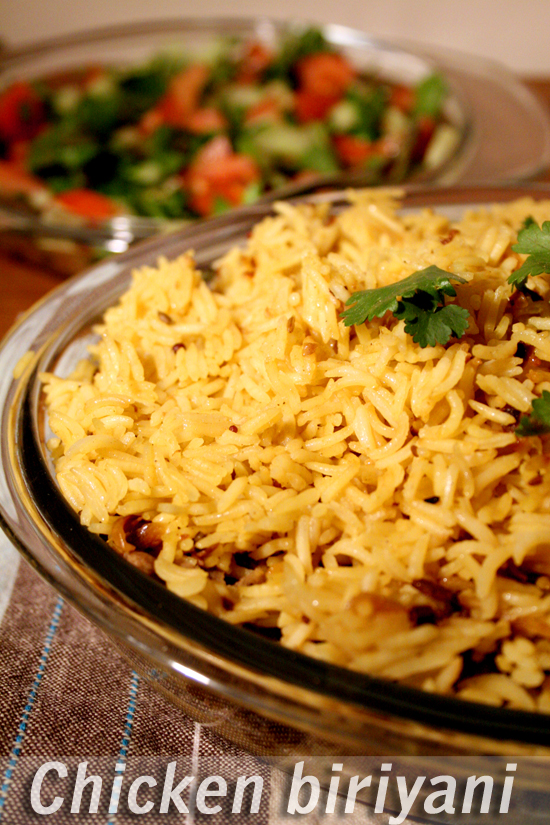 I am embarrassed to admit that, when I first met Nick 9 years ago, I did not eat curry.  Well, I ate my mom’s famous chicken curry (recipe sadly missing, otherwise I would be making it by the bucket), but that was more of a sweetly curry-flavoured chicken stew – think warm coronation chicken – and really not a proper curry.  Every time I had tried curry, it was of the take-the-roof-off-your-mouth hot and seriously unpleasant for those of a sensitive palate like myself.  But then I met Nick, who adores every kind of hot food known to man and eats Tabasco like sherbet.  The thin edge of the wedge was chicken korma, which was bearable with its coconut milk and almonds.  And then after a year or two, I began finding that too sweet.  From there I moved on to that UK favourite, chicken tikka masala.  And from there I made tentative forays into Balti curries, Thai curries and such like, discovering nuances of flavour I never knew existed.  A happy revelation and a slippery slope into curry eating!

Much has been written about biryani, a fragrant layered dish of rice, lentils and chicken/lamb/vegetables.  General consensus us that its origins lie in Persia rather than India.  It is a classic example of the Moghul cuisine of Northern India, part of the legacy that was left behind when the Moghul dynasty (a line of Muslim emperors descended from Tamerlane and Genghis Khan) ruled the Indian empire for over three centuries in the 16th to 19th centuries.  The Moghul cuisine displays strong Persian influences in its use of dried fruits, pistachio nuts, cashews and almonds in meat dishes, as well as liberal use of saffron and rosewater or its use of dairy products in meat dishes.  As you will see from the recipe, there appear to be a daunting number of steps involved in the preparation – anything assembled in layers and you just know every pot in your kitchen is going to be dirty by bedtime.  Which probably explains why traditionally, biryani is served on celebratory occasions like weddings and birthdays, not for a rainy Tuesday night in front of the TV.

So, given what I’ve just told you, how is it possible to have the biryani for lazy cooks, as described in the title of this post?

The secret is proudly South African Nice ‘n Spicy one-off spice recipe packs. If you love the taste of proper curry but the spices are a mystery to you; or if you understand the spices but don’t want to buy a big packet of spice that will then lie around your cupboard for months losing flavour, then these little babies are the answer. You get a piece of paper, roughly A5 size, and stapled to one side of the paper you will find four to six little sealed plastic packets of pre-measured spice mixes. Written on the other side, you will find easy-to-follow, step-by-step instructions to make a particular dish. Things like “fry the onions and garlic in the a little oil together with the spices from the first packet. Add the chicken together with the spices from the second packet” and so forth. Couldn’t be easier, really! And the end result has turned out perfectly every time I’ve used one of these marvelous packs. 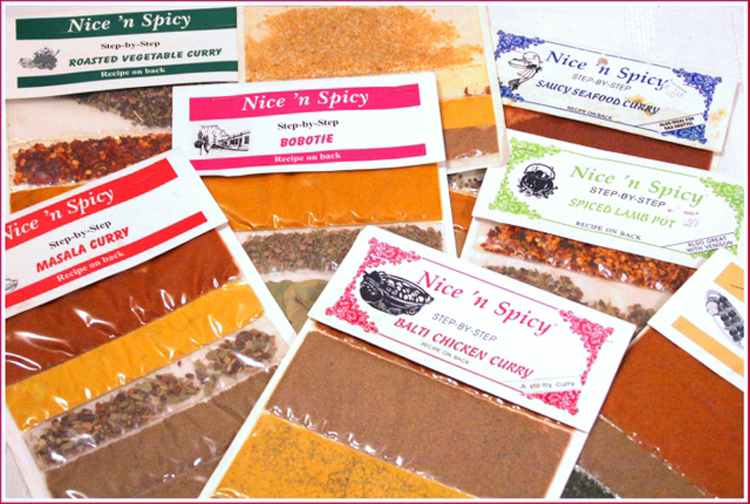 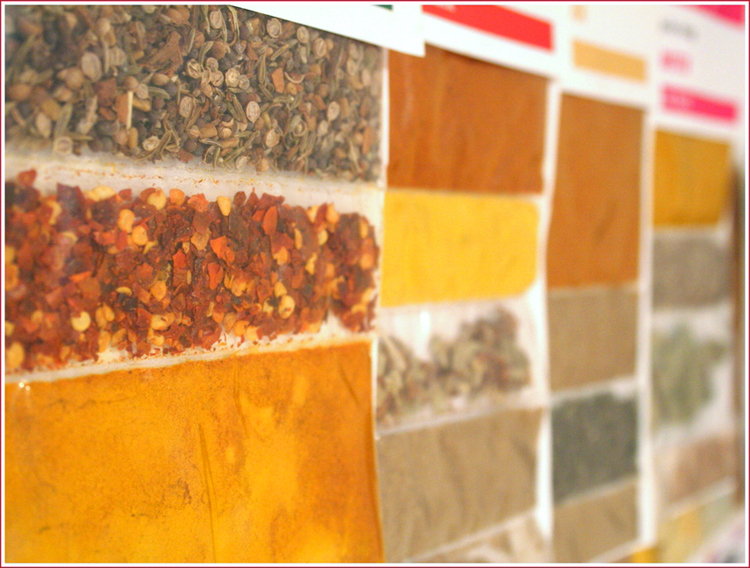 I was even more thrilled when I noticed that the business address printed on these packs is… in my hometown of Port Elizabeth! As it turns out, Nice ‘n Spicy is the brainchild of Vina and Gene Hayden. They used to own Valley Harvest, the best shop in town for exotic ingredients, including their collection of spices and the pre-measured spice packets for a single dish. Although they sold Valley Harvest in 1996, they are still in the spice trade with their retail outlet in Forest Hill where you can find things like Szechuan peppers, vanilla pods or juniper berries, should the occasion call for it. But they have mainly focused their business on their pre-measured spice packs which are available at their outlet and at many local supermarkets – but also around the world (Biltongmakers here in the UK stocks a full range). 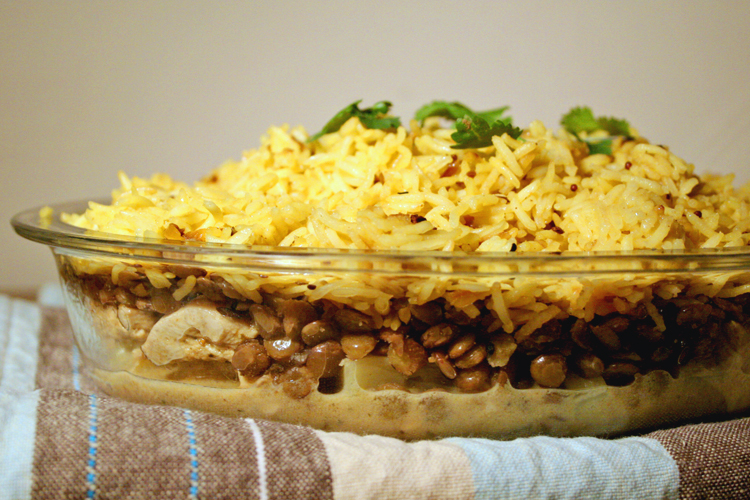 So… what have I made using these wonderful packs? The recipe I’ve probably made the most is the Balti chicken curry and I have to say it is a total winner. Creamy, spicy and a real crowd pleaser – you can even make a vegetarian version, substituting butternut and chickpeas for the chicken. The bobotie turns out perfectly every time and has been made many a time for our friends here in London. The roasted vegetable curry is a hit, Nick swears by the masala and Vindaloo and I love the seafood curry. And most recently I made their chicken biryani which was spectacular. It seems that, whatever pack you choose, you can’t really go wrong.

Which is why I bring them back by the truckload every time I visit home – in fact, my suitcase is redolent with the smell of exotic spices because of the number of these packets I’ve brought over to England in my luggage over the years.  If those little customs spaniels at Heathrow ever get a good sniff at my suitcase, they’re in for a big surprise 🙂

If, on the other hand, you aren’t a) as lazy as I am or b) lucky enough to have a handy stockist of Nice & Spicy spice recipe packs, you can do a lot worse than turning to the excellent Cass Abrahams’ Cooks Cape Malay, which is where the recipe below is taken from. 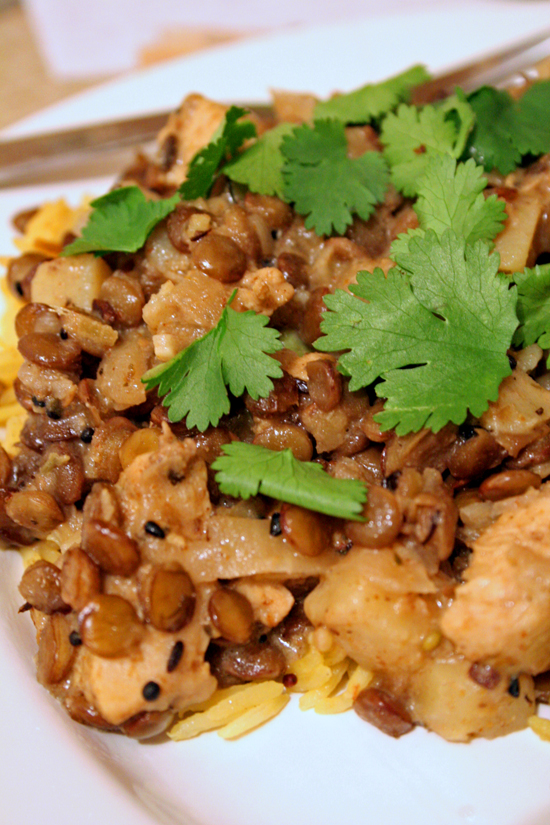 Wash chicken, pat dry and place in a large bowl with half the fried onions.  Make the marinade and cover chicken pieces with the marinade.  Leave for at least one hour.

Pour the oil used for frying into a large saucepan.  Sprinkle 500ml of rice over the oil, then arrange the chicken in its marinade over the rice.  Layer the lentils, potatoes and the rest of the rice over the meat.

Arrange the remaining onions over the rice and sprinkle saffron over it.  Dot with butter, pour water over and close the saucepan tightly.

Cook for 10 minutes over high heat, then reduce heat and simmer for 1 hour or until chicken is tender.