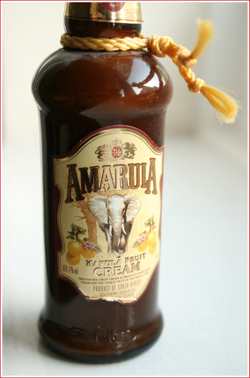 Hands up – who’s had a Springbokkie?

No, I’m not looking for some juicy revelation about James Small’s alleged extra-curricular activities or (even less) a discussion analogous to the one about Australian sheep farmers and their relationship with their sheep…!  And despite the start of the World Cup, this is not going to be a post about rugby.  No, I’m talking about those delicious yet lethal little short drinks in the Springbok colours of green and gold.

When people talk about South African booze, they usually go on at length about our vineyards, our progressive and historic winemaking industry, vintages, cultivars, terroir and the like.  Or they launch into a misty-eyed anecdote involving a rugby matchm Castle lager and some of the manne.  But I think a springbokkie is a far better metaphor for the country and its people.  It’s short and to the point.  It feels vaguely patriotic.  It can kick like a mule if you don’t respect it.  But basically somewhere in there is a very sweet layer.

So what’s in this drink?  Well, it’s basically a shot glass with crème de menthe in the bottom and a magical elixir called Amarula Cream floated on top.  Amarula cream is one of those rare pleasures – a truly South African liqueur (the other one that springs to mind being Van der Hum, made from naartjies).  It is made from the fruit of the marula tree; that is, the tree made famous by Jamie Uys’s in his classic movie Beautiful People, which showed drunkenly staggering elephants and baboons who had supposedly eaten the fallen and fermented marula fruit at the foot of a tree.  The reality is a lot less amusing – because of the low alcohol content in even fully fermented fruit, it would take more fruit to make an elephant drunk than could possibly be consumed from a lone tree.  And apparently baboons prefer the fresh fruit to the fermented ones, meaning that there is a good chance the animals were made to look drunk by using some sort of tranquiliser, which would today be classed as animal cruelty

But that does not change the fact that the marula tree is a revered plant in southern Africa. (Some studies show that the cutting down of marula trees is an indicator of the degree of distress that a community is suffering – they are usually the last trees to be cut down for firewood.)  The skin of the fruit can be boiled to make a drink or burnt to be used as a substitute for coffee. The wood is soft and used for carving; the inner bark can be used to make rope.  The bark contains antihistamines and can be for cleansing by steeping in boiling water and inhaling the steam. The bark can also be crushed into a pulp, mixed with cold water and swallowed in the treatment of dysentery and diarrhoea, and can be used as an anti-malarial measure.

Marula trees are dioecious, which means they have a specific sex. This fact contributes to the belief among the Venda that bark infusions can be used to determine the sex of an unborn child. If a woman wants a son the male tree is used, and for a daughter, the female tree. If the child of the opposite sex is born, the child is said to be very special as it was able to defy the spirits.

Inside the fruit are one or two seeds that are rich in protein and contain oil that can be used as a cosmetic.  And then, of course there are the fruits.  They are approximately the size of small plums and yellow in colour, and are packed with Vitamin C.  When they ripen they are avidly collected by all those living near the tree and either eaten fresh, made into jams or fermented into alcohol, including Amarula Cream liqueur.

It’s wonderful drunk on its own over crushed ice, poured over ice cream, or used to flavour sauces or desserts requiring alcohol. And of course, you can always make Springbokkies…

With or without creme de menthe, it truly is the spirit of South Africa.

« Sausage and fennel risotto
Spicy plum crumble in a flash »