Leftovers.  Can’t live with them, can’t live without them.  When I have them floating round my fridge, I worry about how much space they are occupying and how to use them up.  When I don’t have any in my fridge, I wish I had some to heat up for a quick and easy dinner.  Never happy, some people.  But on a balance, I must say that I am generally a fan of leftovers.  There are few things I like more for lunch than a sandwich of cold roast lamb, Mrs Balls chutney and thinly sliced cheddar cheese.  Any sort of leftover cooked vegetables are easily transformed into soup.  And pretty much anything can be chopped up, sauteed and made into a serviceable omelette filling 😉

This being a South African household, one of the things we most often have is leftover braai meat.  If there were to be an authoritative list of ten commandments of hosting a braai, then surely one of them would be “Thou Shalt Over-cater Ridiculously”.  Every year, as I mentioned, we have a Big SA Braai which is usally billed as bring your own tjop en dop (literally, your chops – or meat – and your booze) and we’ll provide the salads & dessert.  But when people hear that there are a dozen guests, I swear each and every one of them goes out and buys enough meat for 12 people, even though they know in their heart of hearts that every other guest is doing the same.  So in the end you have at least enough meat to feed 144 people, and this being London where everyone has to travel hours by train to get home, everybody refuses to take any leftovers with them for fear of it spoiling on the long trip.  Leaving you, the hostess, with enough meat for approximately 72 meals for 2 people.  Lamb chops with your breakfast oats, anyone??

This ridiculous situation led me to create my “signature dish” of boerewors and butternut squash risotto – I had an abundance of cooked spicy boerewors sausage in my fridge and needed to use it up fast.  Not really a romantic or exotic tale of creation, but there you have it!  Anyway, I stray from the story.  After our most recent Big SA Braai, we were left with a few lamb chops and chicken portions which Nick and I quickly polished off over the next meal or two.  But that still left an entire 2 litre ice cream container full of various cooked sausages:  sweet chile sauce porkies, spicy wild boar sausages, pork & fennel sausage and plain old porkies.  What to do, what to do?  As luck would have it, I noticed that Anthony over at Spiceblog was blogging about a sausage and fennel risotto and suddenly I knew exactly what those porkies were destined to become.

Now fennel is one of the vegetables that I only discovered relatively recently.  I had always known it tasted of liquorice and I have always despised liquorice – even more so after a number of nights at university of getting far too well acquainted with the contents of a bottle of Sambucca (but that’s a whole other story…).  Moving along.  The thing that finally got me turned back onto fennel was my dear sister-in-law Paola’s simple fennel salad:  thinly sliced fennel in a simple oil and vinegar dressing with lots of salt.  It is so fresh and so crispy and really has a far subtler taste than liquorice.  I was hooked.

Fennel (foeniculum vulgare) is a green and highly aromatic plant related to the parsley, cumin, carrot, dill and caraway which originated in the Mediterranean region and south-west Asia.  Cultivated fennel has been bred to have inflated leaf bases, forming the classic fennel bulb that you would buy from the market (it also has a more aromatic and sweeter flavour than its wild cousin). It owes its distinctive flavour to the aromatic compound anethole which is also found in star anise, and all parts of the plant are eaten:  the leaves, “bulb” and seeds.  The pollen can also be used in cooking but (like with saffron) it is excruciatingly expensive.  Apart from its culinary uses, fennel seeds are also valuable natural remedy, used variously as a mouth-fresher, natural toothpaste ingredient, and as a diuretic.

Bonus trivia:  fennel is one of only three herbs traditionally used in the making of absinthe, the famously hallucinogenic liquor popular with the artists and writers of late 19th century Paris.

And so, to the recipe.  As I said, this is a fantastic way to use up already-cooked porkies, but if you don’t have those to hand you can always cook some from scratch.  If you are going down the latter route, I would suggest buying sausages of your choice, then skinning them before cooking and using only the filling.  This will distribute the meat more evenly throughout the risotto.  How did my risotto taste?  Absolutely marvellous.  The cooked fennel takes on a rather sweet taste which was the perfect foil for the spicy sausages, and for a change I was 100% patient and got a perfectly creamy risotto.  It was still delicious cold the next day when I took it to work for lunch 🙂 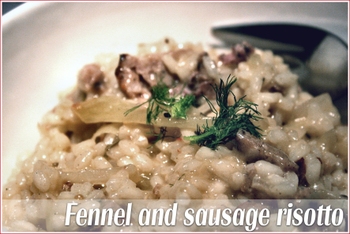 Bring your chicken stock to the boil (or, if you are me, dissolve your Kallo stock cubes!!).  In a heavy-bottomed saucepan, heat the butter and olive oil and cook onion, fennel and sausage slices over moderately low heat, stirring frequently until the vegetables are softened and the meat is cooked. Add the rice and cook for a few minutes until the rice is translucent from the oil.  Stir continuously as it catches easily.

Increase the heat to moderate and add the wine. Cook for about a minute and then stir in 1/2 cup of the chicken stock.  Cook, stirring constantly and keeping the pot at a strong simmer, until all the stock is absorbed absorbed. Continue cooking and adding broth a large ladleful at a time.  Stir constantly and let each ladle of stock be completely absorbed before adding the next.  (This method is what makes your risotto creamy as it releases the starches in the rice, so don’t be impatient!)  It should take about 20 minutes for the rice to be cooked and creamy-looking, but still al dente. Don’t worry if you have broth left over.

Remove from heat and stir in the cheese and the second tablespoon of butter.  Serve and garnish with the chopped fronds.

This recipe is my submission to this week’s Weekend Herb Blogging, kindly hosted by Katie of Thyme for Cooking.

« Waiter, there’s no meat in my barbecue – the WTSIM#8 roundup
Amarula – South Africa in a bottle »