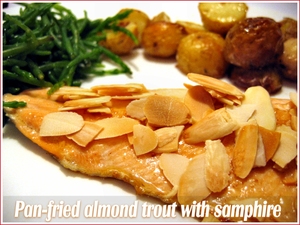 As I said, over Easter Christina and I hit Borough Market for an extended shopping spree.  It is such a great time of year to be at the market as all the spring crops are just beginning to appear – the bunches of asparagus, the gorgeous artichokes, the wild garlic… and the marsh samphire.

Now anybody raised more than ten miles from the English coastline will be forgiven for looking at me blankly at this point.  Samphire??  Isn’t that some sort of semi-precious stone?!  Au contraire.  It’s a fleshy green herb found along the coastal cliffs and marshes of Suffolk and and apparently we’ve been eating it for quite some time.  The name is a said to be a corruption of St Peter’s herb and it even gets a Shakespearean mention in King Lear:

Methinks he seems no bigger than his head:

The fishermen that walk upon the beach

OK, so that’s cheating just a little.  The samphire mentioned in King Lear is rock samphire or crithmum maritimum – the luckless gatherer is hanging halfway down a cliff collecting it, as this is where rock samphire or sea fennel prefers to grow.  The stuff I picked up from Borough, on the other hand, was marsh samphire or salicornia europaea (or one of a few similar species of salicornia).  It’s also known as glasswort as it used to be used in glassmaking (yes, you read correctly!).  The plant is unusually rich in sodium carbonate and the in the 1700s the sodium (one of the principal ingredients in glass-making) was more easily released from the plant than from salt.  The plants were gathered into piles and burned, and the ash would fuse with the sand below to make glass.

Samphire has a short growing 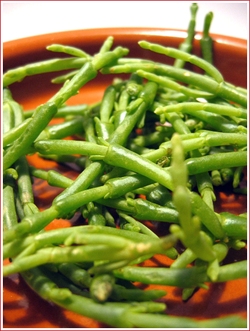 season in the summer.  It appears in muddy saltmarshes as bright green shoots, consisting of fleshy segments rather like some sort of jointed cactus without thorns, and is best picked when young and tender.  It is a member of the halophyte (literally salt-loving) family – that is, a plant that can grow in salt water.  Now salt is not usually something plants can tolerate, so halophytes all have to have ways of dealing with the excess salt.  Some some salt-marsh plants secrete the salt on the surface of the leaves so that the leaves become covered with fine crystals.  But samphire moves the excess salt it takes from the soil into vacuoles in the stem tips, where it is contained behind a protective membrane.  This explains why it is so salty – the salt can’t be washed off because it is actually stored inside the stems! When the salt content becomes too much, the end segment of the stem dies and drops off.  Because it is not commercially cultivated on a large scale in the UK, you are unlikely to see in outside of the area where it grows or specialised markets such as Borough or good fishmongers.  But at Ras al-Zawr on the northeastern coast of Saudi Arabia, some enterprising folk have started the first commercial scale cultivation of samphire.  As the plant contains edible proteins and more vegetable oils than soya beans, and can be irrigated entirely with seawater, it is a miracle crop for countries like Saudi Arabia where water is scarce.  Once processed it can be used to feed livestock, but plans are afoot to export the succulent tips to Europe as a gourmet ingredient.

So less a precious stone than a truly precious plant!

So how does it taste?  Unsuprisingly, very salty!  It is a bit like seaweed and oysters in that it has a rather appealing marine tang but it is a LOT saltier than either.  I love my salt and I found it salty…  I had heard it described as “poor man’s asparagus” but I have to say I don’t get this.  To me, it has a delightful crunchy texture that is more reminiscent of, say, nopales.  And as for flavour… well, it tastes kind of green and salty!  But very pleasant nonetheless, and a perfect foil for simply prepared fish – like you’ll find below.  Look out for samphire next time you go to market, or head to the coast and pick your own 🙂 Soak the samphire in a large bowl of fresh water for 1-3 hours, changing the water every half-hour or so (this is to reduce its saltiness).  I think mine got about 90 minutes – patience is not one of my many virtues!

Rinse and dry the trout fillets.  If you have time, remove the fine bones with a pair of tweezers.  It sounds like a chore but it doesn’t take that long and they are easy to find – all neatly arranged in a straight line with the ends sticking up for easy grabbing.

Toast the flaked almonds in a non-stick pan over moderate heat until they are starting to turn brown at the edges – watch them closely though because they burn easily!

Bring a large pot of fresh water to a rapid boil, dump the drained samphire in it and turn off the heat.

Heat enough butter to generously cover the base of your frying pan.  Lightly dust the fish fillets with flour and when the butter is bubbling lay them, skin-side down, in the pan.  Cook for a minute or so, until the edges are pale pink and the centre of the fillet is still coral-coloured.  Flip them over and cook for a further 30 seconds.

Plate the trout and drizzle each fillet with the butter left in the pan as well as a squirt of lemon juice.  Top each fillet with toasted almonds and serve beside the samphire.  You can drizzle the samphire with butter, but I just gave mine a squirt of lemon juice.  While all this was going on, I also roasted some new potatoes in the oven with olive oil, garlic and rosemary – you can see them in the background of my picture.