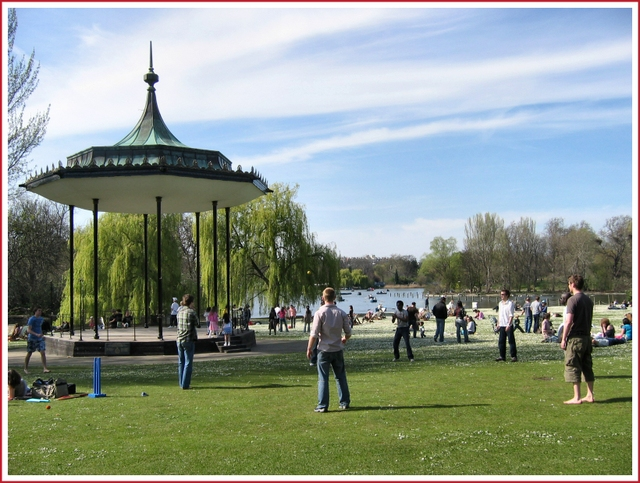 It’s not often that a long weekend and glorious weather coincide in this town – especially not when the long weekend in question falls in early April!  But would you believe, over the Easter weekend two weeks ago, that’s exactly what happened – four glorious days of balmy weather and no work.  Can life get any better??  And despite my stated intention of sleeping till noon every day and then spending the day blogging in the garden with the laptop, I decided that it was time to get a grip, go out and do stuff  as opposed to just writing about doing stuff 😉 So in a fit of adventurousness I suggested to Nick that he could go and lie on the grass in Regents Park while I wandered around taking pictures of flowers, and he promptly embellished the plan by saying he was going to take me somewhere I’d never been before to buy lunch. Music to my ears!

We took the train to Piccadilly Circus and walked up Piccadilly, by which time I had an 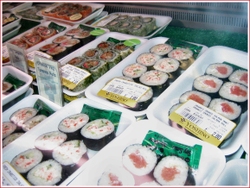 inkling of where he was taking me:  The Japan Centre!  This is one of those places that I would never have bothered going into if not for the personal recommendation from Nick (who seems to go there regularly for take-aways at lunchtime – who would have known?).  As the name suggests, the building is the HQ of a diverse selection of Japan-related businesses:  a Japanese grocery store, restaurant and take-away, bookshop, travel centre and recruitment agency.  At street level, it looks like dozens of other Japanese restaurants in London, but venture down the stairs and you enter another world.  The Japanese grocery store is not huge but it is jam-packed with every Japanese ingredient your heart could desire.  Multiple types of noodles, sauces, teas, sushi ingredients, bags of frozen dumplings, sweets – you name it. There’s also a shelf of booze, for those days when you need cooking sake but ASDA is out of stock 😉

But wait – we weren’t there to buy groceries – we were headed directly for the Yoshino sushi counter.  One glance at the prices and I coudl see why Nick comes all the way out here for his lunch!  Each tray had eight hefty pieces of sushi in it (maki and inside-out rolls) and there wasn’t a single price over £3.00!  There was also nigiri and sashimi in another part of the fridge (costing fractionally more), but we were too busy drooling over the rolls. Apologies for the picture quality but after snapping one shot I was politely told that the store has a no photo policy – Nick shot me a look that said “I knew one day this blogging would get you into serious trouble with the law” and rolled his eyes.  But once the camera was put away I could focus on the food.  Between the two of us we got 32 pieces of sushi and the price was a fraction over £10 – not bad! 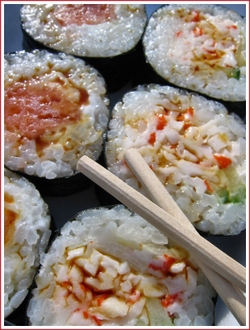 From there we made our way to Regents Park which has always been one of my favourite London parks.  It has everything a park could ever wish for:  an open-air theatre, a zoo, a rose garden, cafes, sports fields, a boating lake, a bandstand and loads of grass on which to laze about on beautiful spring days.  So we made our way to a nice open spot, spread out our picnic blanket and made ourselves at home.  Mind you, not as much as the group near us who were indulging in a bit of mutual grooming that rightly belonged in a David Attenborough nature show!  But that’s the London parks for you – open to all sorts 😉  So we turned our attention away from them and towards our sushi, which made for far more 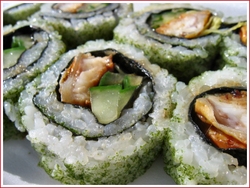 appetising viewing.  We each had a tray of the mixed salmon and crabstick maki rolls, plus I had a tray of eel and cucumber inside-out rolls.  My favourite was far and away the crabstick maki – with a little soy sauce they were just heavenly.  My only complaint would be that they were too big to get my mouth around, leaving me attempting to dismantle each roll with my chopsticks before eating it.  Messy, but still deilcious.  I must say, though, that I was not as taken with the eel and cucumber rolls.  Although I am a fan of smoked eel in sushi, this was not the best I’ve had.  It didn’t seem particularly smoky and the texture was, erm, challenging in some of the rolls:  unexpected prickly things on the skin in sharp contrast to the unctuous layer of fat beneath.  Mind you, it wasn’t so bad that I left a single morsel – but if I went back I would think twice about ordering this.

With lunch out of the way, Nick wanted to do a bit of reading for his forthcoming exams, so I took my cameras and wandered off in search of spring flowers.  That’s one of my favourite things about Regents Park – from the first week of March right through to autumn there is always something lovely to look at.  In March, it’s the fields of bobbing yellow daffodils under all the trees.  In April, they do spectacular plantings of tulips and primroses that dazzle you around every corner.  At the height of summer, Queen Mary’s gardens in the middle of the park is home to a rose garden that will blow your away.  Huge beds of roses in every shape, size and colour dazzle you as you slowly become intoxicated by the heavy perfume.  And in autumn (if the summer has been warm) there are the autumn colours.  An attraction for every season – but my favourite is definitely tulip season.  So while Nick studied, I thanked heaven for digital cameras and took dozens of pictures.  A Good Friday indeed. 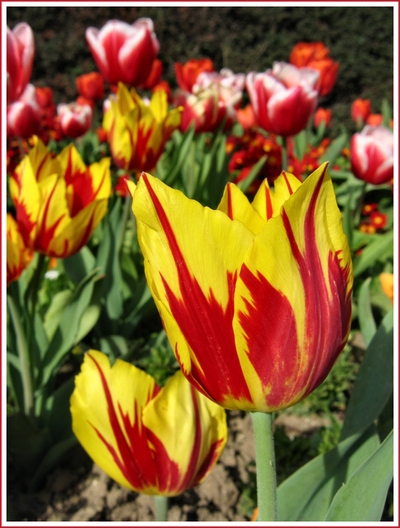