If the picture has a vaguely familiar look about it… it’s because it was taken just upstream from where I took a glorious picture the previous time I visited Le Pont de la Tour! But I really can’t resist posting this one because one of the most fabulous things about the restaurant (and the reason for its name) is its riverside location, literally in the shadow of Tower Bridge. There can be few more impressive sights to treat visitors to, which is part of the reason why, when Andrew mentioned that Lara from Cook and Eat was coming to town at the end of last year, I suggested that we go to P de la T.

I have written before about my previous dinners at Le Pont de la Tour so I won’t bore you with the background information again.  Suffice to say that I have a) always sat outside before and b) always been there on discount wine nights, when you pay off-license prices; and c) always had very happy dining experiences.  But with Murphy’s Law being what it is, the night you recommend a place to friends (food bloggers at that!), things will go wrong.

For a start, we had to sit inside.  This was not really a function of the weather (from the picture you can see that it was a clear, still night, albeit a little chilly) because there are (evil, evil!) patio heaters on the terrace.  But it appears that they have chosen the winter season to do some renovations to the apartments upstairs, and the entire terrace area is covered with scaffolding.  So we were stuck inside, from where you really have no inkling of the glorious bridge outside.  Also, inside you are subjected to the bewildering repertoire of the pianist/vocalist.  I say bewildering, because some of the stuff she chose to sing suited her voice not one tiny bit and was frankly not what I want to eat dinner to (James Blunt, stand up and be counted). Add to this the fact that there are no soft furnishings in the brasserie to soak up the sound and you have yourself one very noisy room, which made conversation at a long table of seven rather difficult.  Also, the wonderful special offer whereby wines are sold at off-licence prices on Sun-Tues seemed to have come to an end, making the wine rather pricey.  But enough complaining – the company more than made up for these shortcomings:  Xochitl, Johanna, Lara, her husband Cam, Jenni, Andrew and of course, me.  As always, we had much to say to each other and it was lovely to meet Lara whose photos I so admire. 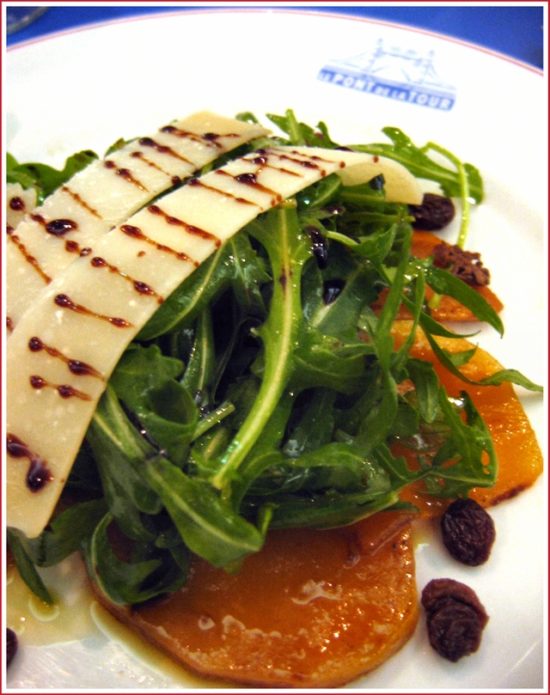 One of my favourite London bargains is the 3-course Menu du Marché for £14.95 in the brasserie section of the restaurant, so this is unsurprisingly what everyone had.  To start with, I had a salad of pumpkin, rocket/aragula and pecorino, topped with a balsamic drizzle and raisins.  I am a big fan of sweet-savoury salads so the sweetness of the raisins and pumpkin, enhanced with a little cinnamon, worked very well for me with the salty cheese and peppery leaves.  I do think that warming the butternut slightly would have improved the salad and a few toasted pinenuts for crunch would not go amiss.  But I was generally happy with my starter and have filed it under “to be imitated at home”.  And it photographed rather nicely! 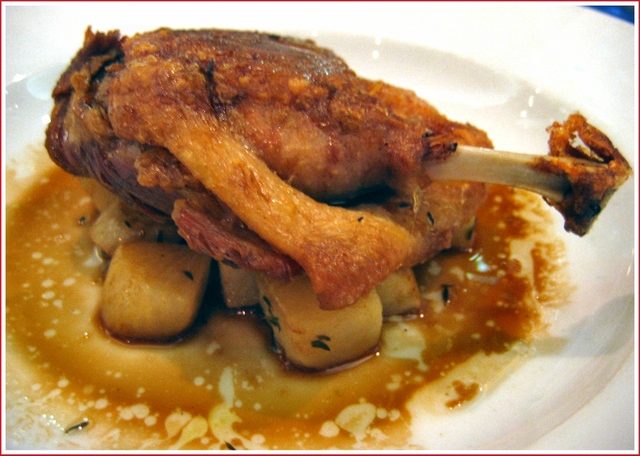 Up next, I chose the confit duck leg.  I am a total sucker for confit duck and if it’s on the menu, it’s very rare for any other dish even to get a second glance.  The only slightly off-putting thing was that it was served on roasted turnips – not exactly a classic pairing and I’m not the world’s greatest turnip fan!  I do have to say that they were better than expected – innocuous and not making a scene.  And whatever odd note they introduced was more than compensated for by the rather glorious duck resting on them.  It was textbook confit duck – sinfully crispy skin hiding pull-apart-with-your-fork meat, and I loved it.  A classic dish properly executed.  Johanna (who was having a bad menu night!) had pan-fried cod with seafood sauce that looked more like a katsu curry sauce than anything else.  Underwhelming.  But Xochitl had more luck with her juicy chicken breast and rather spectacular potato gratin, which I would have stolen off her plate if her attention had wandered for more than two seconds 😉 And so, to dessert.  One of the long-term standbys on the brasserie dessert menu is their classic petit pot au chocolat, which I have had on at least three other occasions.  So this time I threw caution to the wind and decided to try something more seasonal – figs.  And thank heavens I did, as the gratin of fresh figs in an eau de vie sabayon was one of the nicer desserts I’ve had in ages.  The figs were grilled just long enough to soften but not to lose their shape and their sweetness played off beautifully against the alcoholic kick of the creamy sabayon.  It was light and lovely and I could have eaten a triple portion of it – definitely the culinary highlight of the evening for me!

As I mentioned, though, there were some issues with the seating and the noise, plus I knew Johanna was not that thrilled with her menu choices.  So as the person who had recommended the restaurant, I felt semi-responsible and kept panicking over whether people were having a good time.  When it’s your recommendation and things aren’t 100% perfect, you rather feel the need to keep reassuring people “it was better last time, that’s why I recommended it”, in a bid to stop them thinking that you clearly have no clue as to how to spot a good restaurant!  The low point in the service came when we were attempting to pay, splittng the bill on various credit cards.  Johanna was first to pay and after the waitress had repeatedly swiped her card, she handed it back to Johanna, saying curtly that there was obviously a problem with her card and Johanna had to contact her bank.  Anybody who has ever had a card malfunction in a public place knows what an unpleasant experience this is, hinting at your impending bankruptcy.  Then it was Xochitl’s turn – different card, different bank and… the credit card terminal generated the same error message.  It was at this point that the waitress suddenly realised that the problem might be with her terminal, not the cards!!  After fetching another terminal, all the transactions went through without a problem.  This wasn’t my gripe – it happens and equimpent malfunctions.  But it was the lack of apology and generally off-hand way that the matter was handled that left a bad impression.

Reading over all my visits to Le Pont, I think the message that Mr Conran would do well to take note of is that he has a fabulous setting, a well-priced and generally excellent prix fixe menu – but his staff recruitment policy needs some work.  Pretty much all my gripes about this place have related to the staff!  If this were not part of one of London’s more prestigious restaurant groups, the service issues might be forgivable, but the fact is, it is part of the mighty Conran empire and you know they can do better.  Or maybe all the best staff are poached for the more formal restaurant section as opposed to the brasserie?  Who knows.  Either way, don’t let it put you off visiting – it’s still one of London’s best bargains.  Maybe just wait for the summertime so that you can sit on the terrace and enjoy the million dollar view for the price of a £14.95 dinner!