Phew – the events are coming fast and think this month!  Just as soon as I’d finished my post on twice-cooked oxtail stew for Waiter, there’s something in my… I had to race on to the next post and get my entry done for Sugar High Friday #27.  I must say, I did think for a moment of not participating but then two things changed my mind:

1.  The fact that SHF#27 is being hosted by the ever-fabulous David Lebovitz (and who can say no to him?!); and

2.  The slab of Green & Black’s 70% cocoa chocolate lying on my kitchen counter, just waiting to be turned into something scrumptious.

And so, while my stew was doing its second simmer on Saturday night, I set about deciding what to make.  The theme David has chosen is Chocolate by Brand:  make something using a particular brand of chocolate and then write about why you used it.  Now, as luck would have it, when I returned from my recent trip home to South Africa, I did not return empty-handed.  Somewhere in my straining luggage was a rather large hardcover book, slightly dog-eared and with scraps of paper bulging out here and there.  But despite its appearance it is definitely one of my my most treasured possession:  my mom’s recipe index book.  When I was growing up, this book seemed to be the source of all good things, from chocolate fudge to peanut butter cookies to cheese olives.  I had developed a yearning over the past few months for ginger slices that my mom used to make, and the only place I knew I would find the recipe was in this book – so I laughed in the face of baggage weight restrictions and carried it back over here with me.

As I was paging through it last week, my eye alighted on one of the recipes that my mom had really made her own (together with her cheat’s chicken liver pate and mild chicken curry):  her dark, decadent, boozy and dead easy chocolate mousse.  I remember guests at her dinner parties requesting this in advance, and going into raptures at the table.  I remember people begging her for the recipe while she just laughed and said it was so simple they wouldn’t believe her.  And mostly I rememebr licking the bowl when she was making it 😉

Interestingly enough, her handwritten recipe actually calls for a particular brand of chocolate:  Cadbury’s Bournville.  Don’t laugh.  Remember – this was the southern tip of Africa, 30 years ago.  Fair-trade-gourmet-80%-cocoa-solids chocolate bars hadn’t even been invented!  In fact, at the time, I recall my friends beign slightly in awe of our ever-present slabs of dark chocolate.  In a world where everyone else was eating milk chocolate, my dad insisted on eating only Bourneville (which, I now discover, was one of the first mass-produced dark chocolates, first produced in 1908), or Nestle Albany, both of which were dark chocolate.  We have, however, come a long way since then:  from what I can glean off the ‘net, despite being a lovely, deep, glossy colour, Bournville is made with a paltry 35% cocoa solids and contains a great big whack of sugar!  This is a far cry from today when dark chocolate typically contains 50-85% cocoa solids.  And as you will see, the fact that I haven’t bought Bourneville since I left home and consequently did not use it in the mousse recipe, had a substantial impact on the finished product! 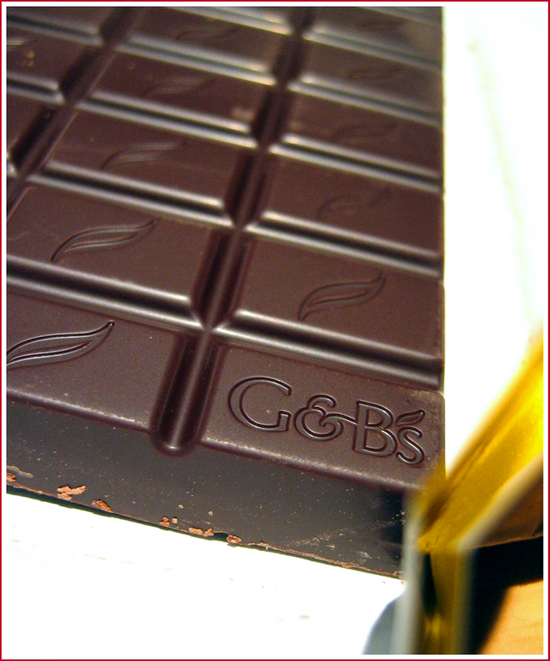 Since coming to England, I have discovered the joys of Green & Black’s chocolate.  Everything of theirs that I have tried has been delicious – even the milk chocolate which is saying something!  The company was founded in 1991 and claims to have manufactured the world’s first organic chocolate (their Mayan Gold was, in 1994, the first UK product certified with the Fairtrade mark), but don’t let all this worthiness put you off.  The stuff tastes fantastic.  A really deep, dark, smoky cocoa taste that makes for a very satisfying sweet snack.  So on the rare occasion when I buy a slab of chocolate, I will usually buy either Green & Black’s or Valrhona (and frankly, Green & Black’s is a lot easier to get hold of!).  Which is how the abovementioned slab got to be waiting for me on my kitchen counter when I wandered in, chocolate mousse recipe in hand.

The wrapper isn’t pictured, but this particular bar is the 70% cocoa version.  Which is a lot different to Bourneville’s 35%.  Make mental note.

Using my brand new Kenwood hand mixer (a little treat to myself after I lost the will to live whipping up egg-whites for my lemon meringue “baked Alaska” petits fours, and an interim measure until I can scrape together the budget for that empire red Kitchenaid…), I made the mousse according to my mom’s recipe.  It was quite surreal, as if she’d just got in touch to give me her treasured recipe, in her own handwriting.  As she had always maintained, the recipe is childishly simple, consisting of nothing other than chocolate and eggs, and some liqueur for citrus flavouring.  I wasn’t entirely sure of how much chocolate to use as her recipe says “12 blocks of Bourneville chocolate” – not much help when you don’t know how big the slab & blocks were, or how they compare to Green & Black’s blocks!

The final result was pretty much exactly as I remembered it:  dark, rich and with a slight citrus kick, but quite light in texture.  I also figured out that what I always though were chunks of undissolved chocolate (my favourite bits) are in fact little chunks created when the chocolate and egg yolks are mixed.  Probably shocking to a mousse texture connoisseur but rather yummy to me 😉 But there was one striking difference:  this mousse was considerably less sweet than the original version, and seeing as the recipe contains no sugar, this has to be down 100% to the chocolate used.  At first I thought that I had messed up the amount of chocolate by guesstimating about 15 blocks of a 100g G&B’s slab – surely too little chocolate would lead to a not-too-sweet mousse as the egg dominated?  But now that I know quite how big the discrepancy in cocoa solids is between Bourneville and G&B’s, it all becomes clear.  Together with the (optional) slug of alcohol, using a less sweet chocolate makes this a very grown-up dessert indeed with a real bitter cocoa taste.  If you wanted something more toned-down and family friendly, you could always substitute another kind of chocolate.  Easy peasy!

Thanks, David, for giving me an excuse to make this little reminder of childhood, and for getting me to think about how the ingredients were affecting the end product 🙂 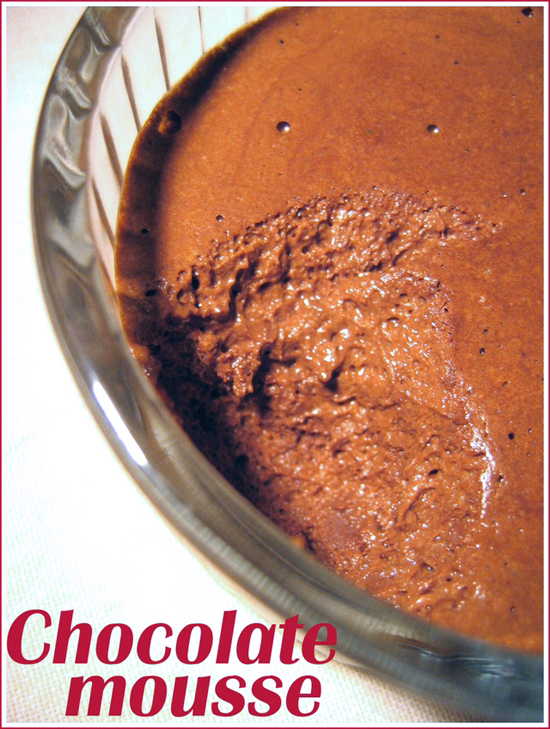 about 70g dark chocolate, chopped (I have subsequently settled on about 35g of Bourneville and 35g of a high-cocoa chocolate as a good compromise – ed.)

When the chocolate is melted, remove from heat and allow to cool slightly.  Whisk together the egg yolks, liqueur and zest and mix into the quickly. (Note – if you don’t work fast, the egg cools the chocolate down so much that it becomes almost solid and hard to mix.)  Fold in the egg whites and mix thoroughly, preferably with a wire whisk.  Pour into glass ramekins and chill until serving.  You can serve these with a dollop of thick cream.  For a choc-mint variation you can substitute the Cointreau with Creme de Menthe, and omit the orange zest.