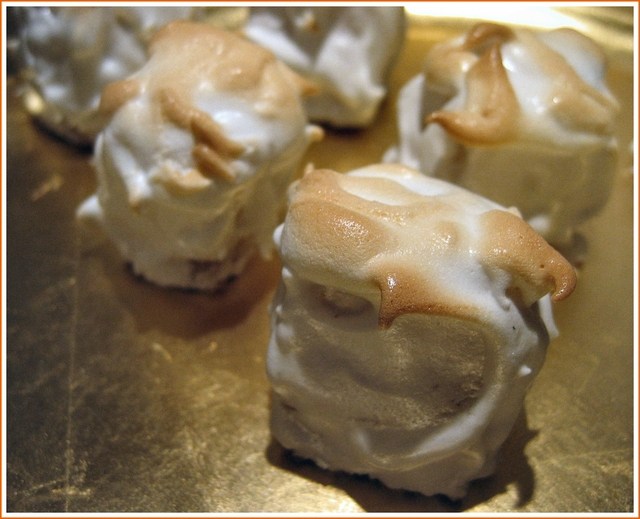 Hey, hey, it’s Friday!  That’s a good feeling under any circumstances.  But this Friday is particularly good because it’s… Sugar High Friday – hurrah!  And as you may recall, I’m hosting this round and decreed the theme to be petit fours.  Now, I have an admission to make.  I chose this theme because I like eating petit fours, not because I had any proficiency in the making petit fours department or, erm, any idea whatsoever of what I wanted to make.  I think it was about halfway across the Atlantic on Sunday night, en route back from Boston, that I started panicking about what the hell I was going to make.  I’m not a exquisite-little-dish kind of person – when it comes to my own kitchen I’m more of a feeding-the-five-thousand hearty dish kind of girl.

But enough trawling of my cookbooks and the internet did eventually give me some inspiration and I decided to put a spin on something that I have only made once before in my life: baked Alaska.  The one and only time I made this was for Christmas lunch in 2001, after watching my friend Cara make one without too much drama.  I had always thought of baked Alaska (as any child who grew up in the 70s!) as the height of culinary sophistication, so it was a pleasant surprise to find that it was fiddly to make, but not impossible.  So I figured… how hard can mini baked-Alaska-style petit fours be?  As I had very limited time this week, in between a raft of social engagements and trying to catch up on the sleep that the trans-Atlantic flight stole from me, I am afraid I cut some corners:  I did NOT bake my own sponge and I did NOT make my own lemon curd (mea culpa, mea culpa…) but I did whip up my egg whites manually with a hand whisk.  Does that count?  Artisanal whipped egg whites?? The basic idea behind these was to replicate approximately the taste of a lemon meringue pie (one of my favourites) while packaging it as a bite-sized baked Alaska, and using the traditional petit four format of layers of cake sandwiched with something gooey.  The curd that I used was the truly delightful lime curd from Rose Farm in Somerset.  I can highly recommend this – it has a lovely consistency and is properly tart – perfect with the meringue topping.  The cake was a slab of basic Madeira cake from the supermarket, chopped into suitably sized blocks.

What I did notice was how damn long these little suckers took to make.  The slicing of the cake was easy, the spreading of the curd and sandwiching them was easy.  But the meringue bit (even if you discount the 40 hours or so it took to whip the egg whites!) was tricky.  The little sandwiches of cake were about 3cm square and about 4.5cm tall, and were already balanced on the baking sheet in neat rows.  So I had to use all my manual dexterity to spread the meringue mix all around them without having them topple over on one another.  It was a lot more fiddly than I’m used to, but I kept telling myself it would be worth it in the end…  Once that was done, things went very quickly.  About 7 minutes in the oven and they emerged – golden and beautiful!  There were 12 of them, so I thought we’d have a couple and I’d take the rest to work.  But I didn’t count on how moreish they would be.  Nick and I sat on the sofa, tasted one, tried another just for quality control, had one to accompany our tea… and the next thing I knew they were all gone!  Bites of delight indeed.  You have been warned! 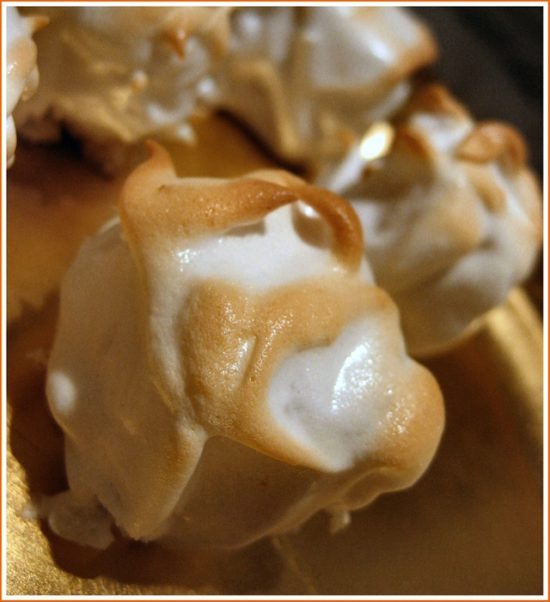 Slab of plain sponge or Madeira cake, about 4cm high

Preheat your oven to its hottest setting.  Whip the egg whites.  When they are foamy, add the cream of tartar and salt.  Once they form soft peaks, add the sugar gradually and beat well after each addition.  When they form stiff peaks, fold in the vanilla essence.

Slice your slab of cake in half horizontally.  Spread the bottom slice with a generous layer of lemon curd.  Sandwich it with the top half and slice the whole thing into little bite-sized “sandwiches” (mine were about 3cm square).  If possible, stand these in little paper mini cupcake cups as they are difficult to handle after they are baked.

Spread the meringue mix all over each “sandwich”.  Try to cover every millimetre, but it’s not the end of the world if you don’t as there is no melty ice-cream involved.  No need to be too neat either – some peaks and undulations will make them look interesting once they are baked. Once they are all covered, pop them in the oven (on the bottom shelf) for FIVE MINUTES.  Then check them every 30 seconds and whip them out as soon as they are brown to your liking.  The last thing you want is burnt meringue, so watch them carefully!

I only had 2 layers of cake and one of curd, but you could be more adventurous and do many smaller layers.  The meringue does not become hard, so handling them once they are cooked tends to destroy them (as I found out!).  Next time I will bake them in individual paper cups as specified above.  As there is no ice cream involved, it is less crucial to whip them out of the oven fast.  I might leave mine in longer next time, with 5 minutes on high and then at a lower temperature to dry out the meringue a little more.

***STOP PRESS***  Want to see what everybody else made for this event?  Well, then check out my SHF#24 roundup – over forty different petit four inspirations!