You are here: Home / Recipes / Braai/Barbecue / Pork fillet stuffed with pear and sage – Scenes from a braai Part I 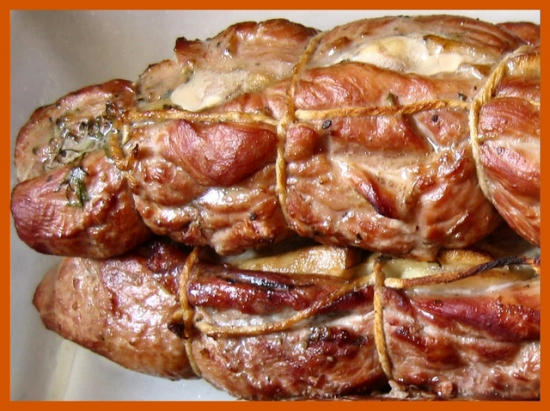 So as I mentioned, a couple of weeks ago we managed to attend three braais in as many days and each of these featured at least one great recipe.  The first of the three took place after work on the Friday night at chez nous – I have already posted here about the fabulous cherry clafoutis I made for dessert.

But what about the rest of the meal?  Well, it had to be something that we could do fairly quickly after work and seeing as the weather was still delightfully warm, I wanted something fairly light, but a bit special.  My friend Olwen was very impressed when I called our little get-together a “dinner party” as opposed to just “dinner” – but in my book if you lay the table with beaded placemats, make two courses, open some wine and sit around chatting with good friends, it qualifies as a dinner party!

The main course we ended up making was a dish we’ve made twice before, once when Johanna and family came over for lunch last summer (yikes – still not blogged!) and once for a family gathering of Nick’s distant relatives, so we are fairly confident about making it.  It all started when we wanted to make our famous stuffed beef fillet one day but coudl not find a suitable fillet in time.  Nick got to wondering what else he could stuff and roast on the braai withut too much trouble – and came up with pork fillets.  He spent a while on the internet going through various recipes until he found one on this great site that looked simple and that we could adapt for braais.

If you want to go the whole hog (so to speak), you start the day before and marinate the pork fillets (tenderloins) in Nick’s Top Secret Marinade.  Unfortunately this is so secret that the recipe has never been written down (!), but consists broadly of finely diced onions and garlic sauteed in olive oil and then mixed with soy sauce, Mrs Ball’s chutney, worcestershire sauce, sweet chilli sauce and tomato ketchup (and honey if you like).  This all gets mixed up until you like the taste of it and then (ideally) poured into a ziploc plastic bag in which your pork fillet is already residing.  Try to squeeze out all the air and seal the bag and then refrigerate the marinated fillet overnight.  This is absolutely the best way to marinade meat and works especially well for chicken pieces.  The marinating step isn’t essential, but adds a nice sweet and spicy flavour to the meat. The next day, all you have to do is the slightly messy job of slicing the fillet open, stuffing it and securing it (either with string or by sewing it shut) before cooking it on your Weber kettle braai.

Nick always makes sure he has soaked some wood chips (usually hickory) which he puts on the coals in the Weber to add a smoky flavour to the meat – works like a treat.  And of course, he has the indirect fire down to a fine art (briefly, a method of making fire where you keep the charcoal on either side of the meat rather than underneath it, and separate them into two halves with a drip tray.  You also leave the lid on during the cooking process and end up with luxuriously moist meat.)

The end result is really delicious without being rich.  The sweetness of the pear and the strong taste of the sage work really well together and the sweet smokiness of the marinated, Weber-smoked meat is tender, moist and marvellous.  Oh yes, and it looks so impressive – guaranteed to turn any old dinner into a dinner party 😉

If you have marinated the meat, remove the meat from the marinade.  Pat dry and slice open along the length of the fillet, making a pocket in the meat.

Lay slices of pear all the way along the pocket and top with sage leaves.  Drizzle over the dessert wine and top with some ground black pepper, and sew or tie the fillet securely.

Place on a Weber charcoal grill over an indirect fire (position the meat over the drip tray) and baste with the remaining marinade.  If you haven’t gone the marinade route, brush the fillet with melted butter before placing it in the Weber.

Close the lid and allow to cook for about 45 minutes or until done.  Try not to lift the lid too often during the cooking process as this will decrease the temperature and increase the cooking time.

Check for doneness, then remove from the Weber, wrap loosely in aluminium foil and allow to rest for 5 minutes. Slice and serve with a potato bake and a big green salad.