You are here: Home / Recipes / Easy tabbouleh a la Cooksister – Food for a heatwave Part II 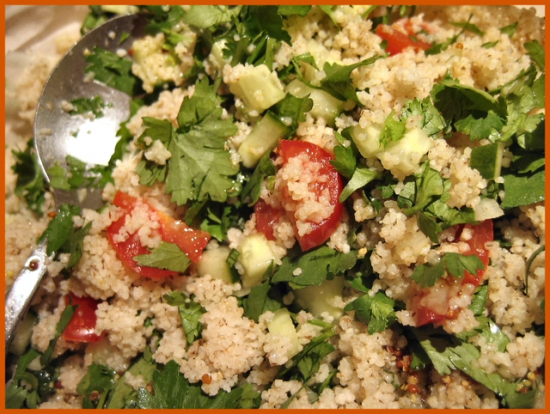 As I mentioned before, we had a major heatwave (for this neck of the woods, anyway!) a few weeks ago, and it was all I could do to keep thinking of dinner recipes that did not involve cooking!  And that were substantial enough to satisfy Nick’s ravenous appetite.  The latter factor usually means that just a big green salad won’t be enough so I have had to be a little more inspired than that 😉

I think the first time I ever had tabbouleh (also spelled tabouli) was probably at the fabulous Anatoli restaurant in Cape Town sometime in the early 1990s. I can’t rememebr specifics of my first meal there, but I do remember it being one of the most exotic restaurants I had seen, and I rememebr the waiters bringing trays the size of doors covered in little bowls of delicious things.  Since then I have become far better acquainted with many Middle-Eastern delicacies, but one of my favourites remains tabbouleh.  Now, Paris has a huge advantage over London when it comes to tabbouleh.  Somehow their colonial expats seem to have come from just the right places and therefore you can find pretty good tabbouleh in every supermarche, not only in speciality stores like here.  (But then again, Britain did get a spectaular curry culture, so I guess I shouldn’t complain!)  So the truth of the matter is that I rarely eat tabbouleh except when I’m in Paris – and then I pig out on it.

But a few weeks ago (inspired by Sam’s recent stock-take in her pantry), I did a bit of cleaning of my own and discovered some barley couscous which I put conspicuously on an open shelf so that I would remember to use it.  When the hot weather was at its peak, Nick bought a HUGE bunch of coriander leaves (cilantro) for a recipe and then didn’t use much, so I had to think of something that would use it as I hate to see foods go to waste…  The recipe I decided on was my simple  take on tabbouleh.

Tabbouleh is a salad, generally thought to have originated in Lebanon, which consists primarily of bulgur wheat, parsley, mint, tomato, spring onion and other chopped fresh herbs with lemon juice and seasoning.  It can also sometimes be made with spices such as cinnamon and allspice, and I have also had it with raisins – so I figured it wouldn’t kill anyone if I added a couple of my own twists & turns.  Traditionally, bulgur is used as the carbohydrate component, but I have also seen recipes where couscous is substituted, so I didn’t feel too guilty about my little substitution.  Bulgur (or burghul as it is known in the Middle East) is a processed form of wholewheat – durum wheat is used and the wholewheat grains are boiled until tender, then dried and cracked into small pieces.  The end result retains a great nutty flavour and cooks very quickly as it has already been par-cooked.  Possible substitutes include cracked wheat (which is uncooked and therefore needs a longer cooking time) and couscous which is in fact a type of granular pasta made from semolina or barley.

So I decided to throw together my version of the dish, in which I used couscous, substituted coriander for flat-leaf parsley (something I often do) and threw in some extra cucumber, all topped off with a lemon and olive oil dressing.  And the following day, I added some cubed haloumi cheese to the leftovers and it made a perfect summer lunchbox to take to work!  Tabbouleh – the gift that keeps on giving… 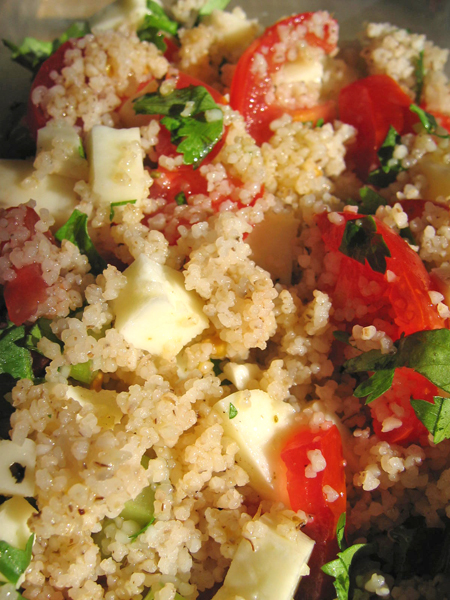 about a cup of couscous/bulgur/cracked wheat, prepared according to the package instructions

about 1/3 of a cucumber, diced

a ripe diced tomato (or like me, a handful of baby plum tomatoes)

a handful of chopped mint (I didn’t have any)

olive oil, lemon juice and vinegar for the dressing

In a large bowl, mix together the couscous and all the chopped ingredients.

Mix together the dressing ingredients – preferably in a bottle so that you can shake it well.

Por the dressing over the salad, toss and oila!  Could not be any easier!

Other editions of “Food for a Heatwave” include:

« Foodbloggers’ Guide to the Globe: 5 things to eat before you die
Pork fillet stuffed with pear and sage – Scenes from a braai Part I »