Plenty of reasons, really.  Plus the fact that it’s situated in the rather charming Exmouth Market which always feels strangely un-Londonish and exotic.  So it was with delicious anticipation that Johanna and I booked a table and agreed to meet there with our respective other halves a couple of Fridays ago.  As with many other popular London restaurants, I could not have a table for 19h30, but was allocated a 19h00-21h00 slot which I always find tremendously annoying – but c’est la vie when dining in London.

Moro is an airy (if somewhat bare) space with a couple of tables on the pavement leading to a long, modern room with a bar counter down one wall and an open kitchen at the back of the room, lit with natural light from a large skylight.  The lack of soft furnishings make it a rather noisy place too, but we weren’t too bothered as we weren’t there for a romantic meal a deux 😉 While we chatted and looked at the menu, I watched as a waiter sliced chunks off the still-steaming, blackened loaves of bread fresh from the charcoal oven.  Said chunks were brought over to us with some olive oil and proved to be a very promising start to the evening – dense and heavy with a chewy crust that perfectly paired with robustly fruity olive oil.

The first disappointment came with the information that tapas are only served if you are seated at the bar.  Since we had all been rather keen on tapas, this was a blow, and with four people it’s jst not practical (or social) to sit in a straight line at the bar!  I guess we coudl have pushed the point, but in any event it looked like a silly ruling.  Why would it be harder for the staff to serve tapas at the tables, rather than serving food off the full menu?   So it may well be that if we’d sat at the bar and had tapas, it would have been a different evening, but that’s not what transpired.  For our starters, Johanna, Nick and I all had mojama (salt-cured tuna loin) on fresh pinto beans cooked with tomato – and this was truly the highlight of my meal.  I had never heard of or eaten mojama but I certainly plan to do so again in future!  It looks like cured ham and is very salty at first, but this was the perfect foil for the mild pinto beans, and the first wave of saltiness turns into a delicious and robust fishiness after a few chews – just gorgeous. Chris had jamon iberico and grilled padron peppers which were visually very striking but he wasn’t particularly moved – unlike the rest of us and our mojama! However, things took a turn for the worse with the arrival of the main courses.  Both Johanna and Nick had the wood roasted chicken with courgettes cooked in yoghurt and mint with pine nuts.  And on the plus side, I do have to say that the portions were gigantic.  Each of them got what appeared to be two chicken supremes (or two utterly enormous thighs) with crispy skin – but with little pools of fat in the nooks and crannies of the chicken.  Now, for a cholesterol queen like me, that might not have been a problem, but neither Nick nor Johanna was particularly impressed with the generaly fattiness of the chicken.  I have to say, though, that their accompanying courgettes cooked in yoghurt and mint was delicious and made me wish I’d ordered the chicken.  But the portion size and the greasiness were, frankly, off-putting. Chris had the charcoal-grilled red mullet with celery, preserved lemon and olive salad.  His exact words when I asked him about it were “well, fish is fish”.  So nothing to write home about there then!!  I had the lovely-sounding charcoal grilled lamb with aubergine pilaf and a spiced cucumber salad.  Good points:  the lamb was delicious and you could taste that it had been charcoal-grilled; and…. erm… that’s it.  One of the things I love most about lamb is its innate fattiness, but this must have been a fillet of some sort as there was not a smidgeon of fat to be seen (or tasted!) on it – disappointing, but not fatal, compared to my other complaints.  The first disconcerting impression was that my plate was noticeably smaller than the other three.  Not only was this slightly odd, it also meant that everything was squished unattractively together – I have to say that for plating, my food got a solid 0/10.  My granny giving me roast lamb for Sunday lunch in her suburban kitchen could have done a better job.  The aubergine pilaf was another disappointment.  The rice was fine and attractively al dente, but the chunks of aubergine had apparently been cooking since about July and all that remained were the chewy squares of skin, each with a slick of the cooked-into-oblivion flesh.  I have absolutely no doubt that I could have done a better job myself – and a touch of seasoning might not have hurt either!  Last and very much least we come to the “spiced cucumber salad”.  Now I don’t know if the chef was having an off night or what, but this consisted of diced cucumber, a handful of chickpeas, virginally pure and devoid of seasoning, plus two bits of flat-leaf parsley in a little heap.  And that’s it.  Spiced??  Not unless the meaning of the word has been changed to “unseasoned; bland” while I wasn’t looking.  So although there was nothing nasty on my plate, it looked boring and hastily thrown together – and tasted the same – which is, frankly, not what I go to a restaurant to experience.  And with the main courses in the fairly substantial £16 to £18 each range, I certainly expected a lot more. Right – on to dessert.  Things can only get better.  Well, as it turns out, not much better.  By that time I think Nick & Chris had seen the writing on the wall and opted for liqueurs instead of dessert.  But the eternal optimists Jeanne and Johanna forged ahead and ordered the chocolate and apricot tart. I had visions of the fabulous tarts at Flaneur where the chocolate and ginger tart consists of rich, dark chocolate topped with chunks of crystallised ginger.  What arrived looked perfectly promising (if indifferently plated) – but sadly, there was no redemption for this tart.  Although the chocolate component wasn’t bad – light and bittersweet – the apricot component appeared to be… a layer of apricot jam spread on the too-solid crust!  I tried scooping some chocolate only from the top of the tart and found…  no trace of apricot flavour.  I’m not saying it was unpleasant, but I certainly expected a lot more from a restaurant with as good a name as Moro’s. 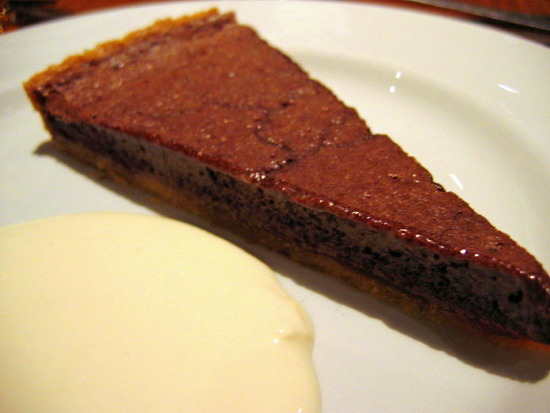 In the end, the meal cost in the region of £35 each with wine, and all I could think was that I’d paid far less for far better meals in London (Arbutus for one; the Salt Yard for another; and not forgetting the terrifically well-priced menu du jour at Le Pont de la Tour).  And although we were expecting to be hustled out of our seats at 21h31, the never happened – obviously because there were no takers for the 21h30 sitting.  Could it be that we weren’t the only ones less than impressed with the place?!

In summary, I couldn’t say that we had an appallingly bad meal.  But it was a consistently disappointing meal (with the exception of my lovely starter), and the price wasn’t low enough that you could forgive this.  Maybe the trick is to go for tapas – I don’t know.  Although, given this experience, I would rather spend my money on tapas at Brindisa.

And here’s Johanna’s review of the same meal.