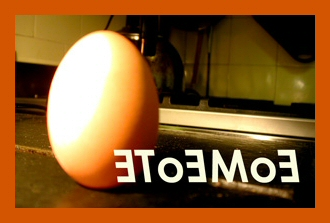 Well, another month is well and truly over and I’ve stretched the concept of an EoMEoTE “deadline” as far as it can go without breaking, so I guess it’s time to round up the shady members of the Priory of Poulet and see what the Da Cluki Code really means.  The challenge this month was to create a dish using eggs and bread (or other carbs) and to give your post a Da VInci Code slant – but hey, we’re flexible, if you didn’t give your dish a slant, we’ll do it for you!  I would be lying if I didn’t say I was disappointed with the turnout, and some of our stalwarts didn’t even show up (no names mentioned but They Know Who They Are!!), but maybe the sight of Tom Hanks in that awful long haircut was enough to put people off the entire concept of the Da Vinci Code – and off their food! ;-)Anyway, it’s a case of quality over quantity here at the meeting of the Priory of Poulet…

All was dark in Westminster Abbey.  Dark and quiet.  That is, until a small side door cautiously opened and a a lone man sidled in.  Nervously he looked around before pulling a small torch from his pocket and saying in a stage whisper “Hello?  Is there anybody there?”.   At first, there was silence.  Damn – his big breakthrough in getting an interview with the secretive Priory of Poulet had failed.  But wait…  was that a shadow moving up by the organ?  “Who’s there?” he called, again in a hoarse stage whisper. “No need to panic”, came the Cooksister’s reply, “we’re all here.  So, you’re an author then Mr… let’s call you Mr X.  And you want to know about our secret society and our relationship with Ova Dei?”  “Yes please!”, replied the man, looking less petrified now.  “Well, sit back, relax and enjoy the ride,”said Cooksister, “it’s showtime!”

From behind the first pillar on Mr X’s left stepped the shadowy figure of Gabriella.  “I am the Priory’s keeper of ovo-crypto-nutritional technology.  While the rest of them are still doing brass rubbinngs of the Rose Line and trying to solve the clues in the Madonna of the Rocks, I embrace the new while still maintaining the traditions of the old.  Now if you’ll excuse me, I have to go and snack on egg salad on crackers and listen to all being revealed on my iPod.”

Mr X had been so wrapped up in Gabriella’s tale that he hadn’t noticed a second shadowy figure sidling out from behind a pillar on his right, and jumped visibly when Ilva suddenly spoke up.  “I bring to the Priory my ESPP power  – extra-sensory pickle perception.  I seek the truth through the medium of random patterns in pickles.  Why, just this evening I was making dinner and when the pickles landed on my plate they mysteriously shaped themselves like the Vitruvian man.  AND he appears to have been viciously attacked by an albino chef!  I tell you, even with my years of communicating with The Other Side, I felt quite unsettled and the only thing that could calm me down was a fried egg and bread salad with farro (spelt), mozzarella and gherkins.”

“That’s nothing,” came a voice from behind the baptismal font, “I bring to the Priory my skill as an ovo-crypto-clairvoyant.”  Mr X turned his head slowly in the direction of the voice, as if he was scared of what he might see… but there was only a hooded figure. “What do you mean?” asked Mr X.  “What I mean,” replied Rhiannon, “is that I have the power to see etymology in scrambled eggs.  And I don’t just mean I can see cheese and salami in my scrambled eggs – I mean… I can see the hidden meaning of things!  The secret marriage between yolk and white!  The mysterious strong-yet-fragile puzzle that is the eggshell! I can see it all!”

“All-seeing, all-dancing – yadda yadda yadda!  I’m the one who does all the work around here!” came another disembodied voice from behind a bank of flickering votive candles.  Again, Mr X strained his eyes but could only make out the silhouette of the hooded figure that was Stephanie.  She continued: “What I bring to the Priory of Poulet is my art of ovo-visualisation.  I mean, I can make people see what it is they really want to see… even though it isn’t really there.  Why, just the other day I took a bunch of Grailers on a guided walk around Saint Sulpice, and at the highlight of the walk, what they saw was Sir Leigh Teasandwich searching for the Holy Grail beneath the stained glass windows.  But what was really there was… a couple of egg salad sandwich fingers and some clever lighting!”

“Aah, yes Stephanie,” said Elizabeth from her seat in the shadows of the choir, “what you do may well be seen as an art, but what I bring to the Priory is the Real Thing.”  Mr X strained his eyes to make out the figure.  “How is that?” he asked.  “Well, you see,” replied Elizabeth, “I am the keeper of the knowledge of Ovapressionism, the little known art-form devoted entirely to painting women with smooth, egg-shaped heads.  And of course, as every college student knows, the most famous example of this school of painting is the Mona Lisa.  But of course, as my knowledge far exceeds that of the average college students, I have discovered the reason for her mysterious smile and it lies hidden in a coded note she holds in her hand.  Oh yes, and a little plate of sustenance which was subsequently painted over.”

Suddenly there was the sound of a throat being cleared up in the gallery by the organ pipes.  Once again Mr X jumped.  “Who’s there?”  “It’s me, the Cooksister,” came the seemingly disembodied voice, “and I thought you might want to know what I bring to the Priory of Poulet.  I bring my knowledge of the arcane workings of the mind of the sacred feminine, the science of ovo-gyno-psychology.  I know the secret workings of the minds of women and how they maintain their sanity in the face of the obsessions of their male partners.  And I know the secret to eternal happiness.”  “And what woudl that be?” asked the author, breathlessly.  “Why, it’s eggs and hollandaise on rocket and toast, of course!” replied the Cooksister.

“Right, Mr X, and now I suppose you’re going to ask to be inducted into the Priory of Poulet, seeing as you know all about us.”  “Oh yes… yes please!” replied Mr X breathlessly.  “Well,” replied the Cooksister, “first there is a little ceremony you will have to undergo, right here, in this cathedral, tonight.  What many people don’t know is that the Priory of Poulet has strong connections with the East, and in particular the ancient kingdom of Siam.  So what we are going to try and achieve with this little ceremony is to send you on a psychic journey to Siam.  Are you prepared for the challenge?”   “Oh yes!” replied Mr X enthusiastically.  “Then let us begin,” replied the Cooksister.

“First, you need to kneel down, right there where you are.”  The author dutifully kneeled.  “Next, you need to release all your negative energy – throw your arms up in the air and intone the sacred sound ‘WAH!‘ In fact, make sure you YELL it.  Off you go – practice a few times.”  And soon the cathedral reverberated with repeated yells of ‘WAH! WAH! WAH!’ as the author yelled his heart out.  After a few minutes, Cooksister interrupted:  “Right, I think that’s enough of that – your negative energy is released.  The next step is to centre yourself and draw in as much positive energy as possible.  For this, you need to pull your hands in from where you’ve just been flinging them and pull them towards your solar plexus, the seat of your psychic powers.  You’ve also got a new chant, and that’s ‘Tanah!’.  So let’s see you practise that a few times.”  And within a few seconds the author was off on his new chant, centering himself with positive energy, ‘Tanah! Tanah! Tanah!’  After yet a few more minutes, Cooksister interrupted again:  “Right, now it’s time to concentrate all your mental and physical power on sending yourself to Siam, so face east and chant your destination, while extending your arms along the floor in front of you.  Off you go.”  And for the next few minutes, all you could hear in the cathedral was ‘Siam. Siam. Siam’ as the author squeezed his eyes shut in concetration and tried to focus on Siam.

“And now, I think you’re ready to put them all together and attempt your psychic journey in order to be inducted into the Priory,”  said Cooksister. “Off you go – and remember, we’re watching you!”  And so the author launched into his routine:  Wah Tanah Siam!  Wah Tanah Siam! Wah Tanah Siam!  Over and over and over, echoing off the walls.  Around the cathedral, the hooded figures just smiled quietly to themselves.

Never had truer words been spoken.

The next EoMEoTE will take place at the end of July, and for a theme, I’m thinking tabloid headlines…!

« Best chocolate sauce in the world… ever!
Blogday Party »