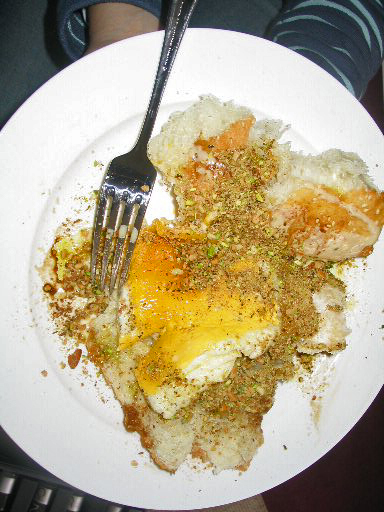 This entry was e-mailed to me by Upulie – a keen follower of EoMEoTE who does not yet have her own blog.

After reading Spiceblog’s entry for fried eggs with red wine, my curiosity was piqued by this ingenious idea of making the best of basic ingredients (and I can’t get that recipe out of my head!). An egg is such a basic thing, and yet can be treated in so many ways: served simply on its own or with something strongly contrasting (Florentine, Benedict) or subtle and enhancing (en concotte). I’ve watched them avidly since and decided, dicey cooking skills notwithstanding, to join in the fray.

After pondering some variations on familiar themes, I came up with the idea of dukkah, an Egyptian spice and nut mix. Bread is dipped in a good olive oil and then in the dukkah as a snack or appetiser. Surely this slightly sweet, spicy mix would go nicely with a poached egg? (Mmm… poached eggs). And some nice pomegranate molasses for contrast with the subtle mix. There were only a few problems with this idea. I could not find pomegranate molasses in Canberra (mutter mutter, soul-less forsaken place) and it is apparent that despite my best efforts (and an egg poacher receptacle thingy), I cannot poach an egg. I love poached eggs. But I cannot make them. After several attempts with nearly boiling and boiling water and several hungry friends standing by, I decided on simple steam frying. Balsamic vinegar and lemon juice had to stand in as poor cousins for the molasses. Not bad overall, but the latter was the make or break.

FOR THE DUKKAH: (if making your own)

1 cup of almonds – I combined almonds and pistachios

balsamic vinegar (or pomegranate molasses if you can get it)

First, make the dukkah. Toast each ingredient separately and grind separately in a food processor (or in a mortar and pestle). It can be as coarse or as fine as you like. Store in an airtight jar. Be wary, as toasting the nuts or sesame seeds for too long can cause the oils to be released and they burn easily.

Poach or fry your eggs. Toast/grill some Turkish pide flatbread (some charring is preferable, drizzle olive oil and tahini on the bread. Drizzle about a tablespoon each of lemon juice and balsamic onto the plate (or your molasses!). Place your egg on the bread and sprinkle the dukkah on and around the egg. Consume.