You are here: Home / Recipes / Whole leg of lamb on the braai/BBQ 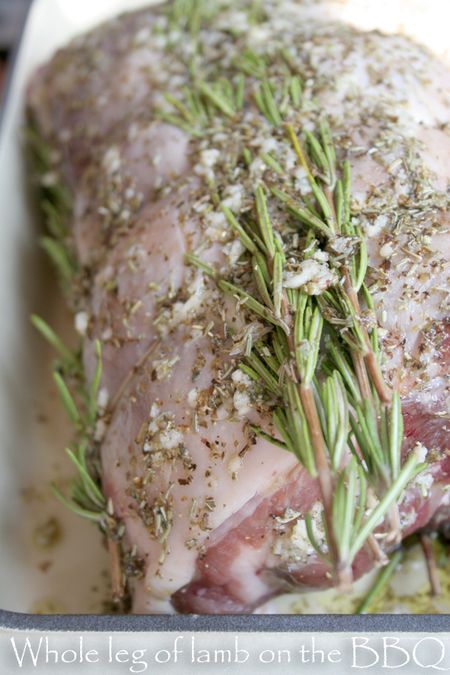 People often ask me who my favourite chef or cookbook writer is, and I never hesitate to answer Nigel Slater.  His Kitchen Diaries transformed the way I thought about cookbooks – here for the first time was somebody who cooked exactly the way I aspired to – and took aspirational photos to boot!  I love Nigel. Which makes it all the more peculiar that I am about to tell you to disregard what he recently wrote in the Guardian.

In a recent article about barbecue food, Nigel explains that his first rule of the barbecue is never to cook anything thicker than your middle finger.   I say poppycock.  In fact, I think this is precisely the attitude that relegates most British barbecues to the murky waters of bangers and burgers on the grill!

Those of you who have been reading this blog for a while will know that I have already posted recipes for stuffed whole beef fillet on the braai (the South African word for a barbecue – it rhymes with fry) and a whole chicken with curried stuffing on the braai – and unless you have seriously malformed hands, both of these are considerably thicker than your middle finger 🙂  In fact, if you own a kettle braai and never cook anything thicker than your finger, you are missing out on one of the great attributes of a kettle braai – its lid means that it is eminently suitable for roasting large pieces of meat slowly.  Provided that you keep in mind a few tips and tricks, cooking large pieces of meat or whole fish on the braai should present no problem at all.

If you follow these simple rules, you should achieve good results every time, even with large pieces of meat – like the chunky leg of lamb a friend brought round to a braai at our house recently.  Although I was a bit dubious at first, (as it was rather large and still had the bone in) Nick assured me that it would cook beautifully – and he was right!  Nick also lightly smoked it by adding smoked hickory chips to the coals just before cooking.  We kept the seasoning simple and served the lamb Greek style, sliced in pita bread with tzatziki, as a starter, and I don’t think I have ever had a more flavourful or tender piece of lamb.

So next time you are trying to decide what to barbecue, walk past the sausage aisle and try something a little more substantial – you might be pleasantly surprised at the results. 1 large leg of lamb (bone in) weighing about 2.2kg
5 cloves of garlic cut into slivers

Using a sharp knife, make slits across one surface of the lamb and insert the garlic slivers at regular intervals.

Whisk together the oil, lemon juice and garlic together with the remaining marinade ingredients.  Pour the marinade over the lamb and rub into the sufrace of the meat. Using 2-3 pieces of string, tie the rosemary branches to the meat.  Cover with clingfilm and refrigerate for at least 2 hours.

When you are ready to cook (see above), remove the lamb from the fridge and bring to room temperature.  Mix the ingredients for the rub in a small bowl.  Sprinkle it on all sides of the meat and pat or rub it in to make sure it adheres to the meat. Cook on the kettle barbecue with the lid closed for 90-120 minutes, depending on desired degree of doneness.

When the meat is done, remove from the barbecue, cover lightly with foil and allow to rest for ten minutes before carving.  As I said, we served ours in pita breads with tzatziki, but you could just as easily serve the lamb as part of a traditional Sunday roast.

If you liked this post, you may also enjoy my whole fillet stuffed with smoked oysters on the braai, venison loin wrapped in bacon on the braai, or whole smoked chicken with curried stuffing on the braai.

« Saturday Snapshots #99
An evening with Peter Gordon at GBK »