Firstly, let me apologise for the saaaaaad lack of posts recently.  The reasons are that a) I am crazy busy at work and b) my weekends have lately been taken up by visits to a friend who is seriously ill, so between trying to balance the real world & the blogosphere, the real world had been winning in terms of time allocation over the past few weeks…  But I couldn’t miss my own blog event, now could I?!?!

Up to now I have always made breakfast dishes for the EoMEoTE, and I figured this month would be no different.  But when I found out that I was going out early on Saturday morning and we were going out for lunch on Sunday, I decided that this was not the weekend for a big breakfast.  Since my friend Bronwyn was staying over at ours on Saturday night, I decided to try a light supper for this month’s EoMEoTE.  In the spirit of the event, I checked out the contents of the fridge for any bits and pieces that might need using up and sure enough, there was the tin of feta cheese that Bron had so kindly brought round last time she came to lunch.  I absolutely adore feta cheese, whether it be the cow’s, goat’s or ewe’s milk version.  Back home in South Africa you can go into any supermarket and be faced with an entire fridge full of feta variations – plain feta, feta with black pepper, feta with Cape herbs etc etc, and they are all packed in brine which means that after opening you can keep them for a couple of weeks in the fridge.  I was disappointed to find that in most big UK supermarkets you can find feta either ready cubed in olive oil or vacuum-packed, and neither of these options appeals.  The oily version is just that – too oily – and the vac-packed version goes gooey and smelly within a day or two of opening the packet 🙁  So you can imagine how thrilled I was when Bron brought round a huge tin of feta cheese in brine from one of the little grocery stores near her place in North London!

Anyway, the trawl around the fridge revealed some free-range eggs, some whipping cream that needed using up, a round of feta and some stray olives.  I was getting ideas and those ideas leaned towards something with a Mediterranean feel.  One quick trip to the supermarket later we were also armed with some fresh salad stuff and 5 wholewheat pita breads.  Yes, either Tesco’s suppliers can’t count or we have unveiled a massive scam which saves the company millions per year – our sealed pack of “6 Wholewheat Pitas” contained only five! Careless accident or carb cover-up?  You decide! 😉

With a nice glass of wine, these were just a delicious light meal.  Nick (who’s just been to Spain) said it reminded him a lot of the Catalan style food they had at their hotel in Banyoles, so I guess my Mediterranean vision didn’t fall far short of the mark!

And to finish, here’s another picture.  The little yellow ball of fluff on the left came from a whole box of miniature yellow fluffy toy chicks bought as a gift for a friend and just goes to show that chicks dig EoMEoTE. You didn’t really think you were going to get through an entire Cooksister post without a pun, did you?? 😉 See you next month at EoMEoTE#5!! 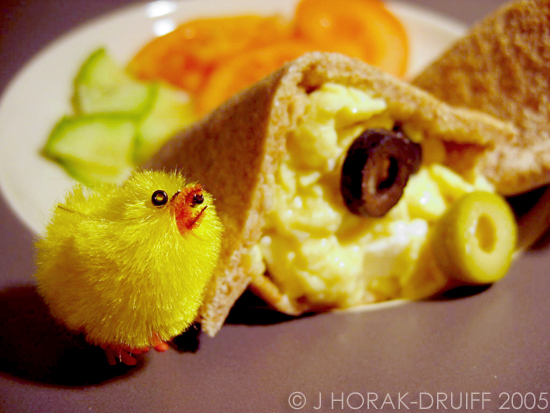 Break the eggs in a large bowl and whisk together with the cream and seasonings.  Thinly slice the olives and cube/crumble as much feta cheese as you would like (varies according to taste!).  Melt a knob of butter in a frying pan and at the same time, pop the pita breads under a medium grill.  Watch them and turn them over when beginning to turn golden.

Scramble the eggs until they are just set, then remove from the heat and stir in the olives and feta.  Cut each pita bread in half, and spoon the egg mixture into the hollow “pocket”.  Serve with a large mixed salad and grilled cherry tomatoes (we forgot to buy these, hence their absence from my photos!)