You are here: Home / Travel / Austria / 7 reasons to take a Winter break in Kitzbühel, Austria 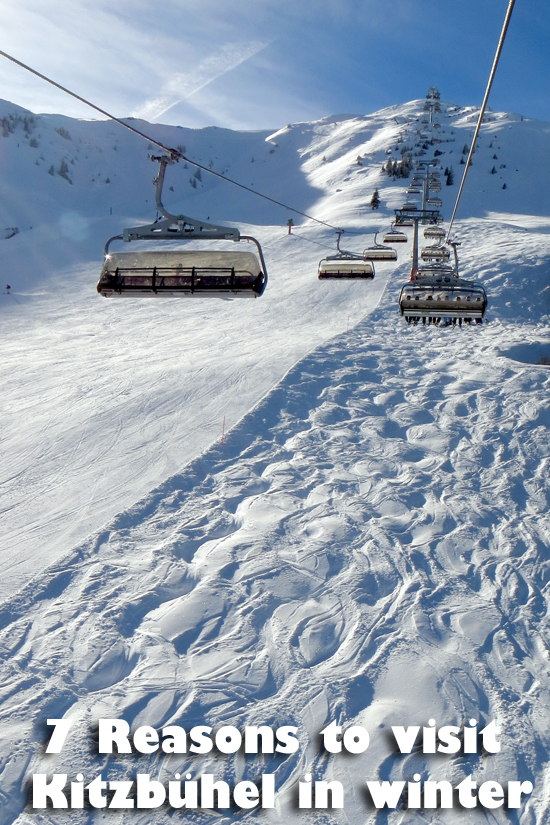 There are a lot of reasons to love living in London:  the amazing art galleries; the wealth of historic buildings; the fabulous concerts of every type of music under the sun; the ready availability of cheap flights to every corner of the globe; and of course one of the most vibrant restaurant scenes on the planet. But one of the most unexpected reasons that makes me love living in the UK is the prospect of an annual ski holiday – a chance to swap the grey London for pristine white slopes and blue skies.   But as the person in my circle of friends who is somehow always tasked with organising said ski holiday, I am also familiar with the  stress of trying to find the right resort.  Which one has good restaurants?  Where will there be snow?  Will there be slopes for every level of ability?  And what is there for non-skiers to do? On a recent week-long visit to the stylish and atmospheric ski resort of Kitzbühel, Austria I found much to like and many of the abovementioned boxes ticked.  I thoroughly enjoyed my visit and here are seven reasons why you will, too. 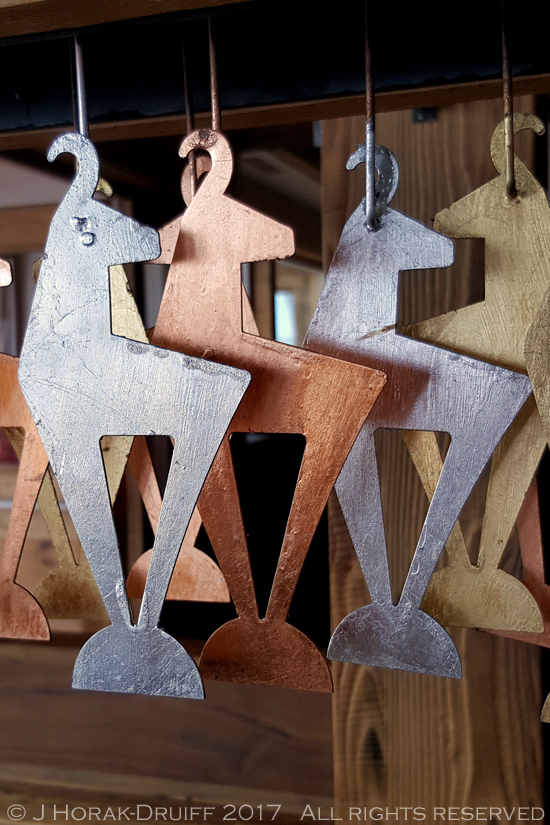 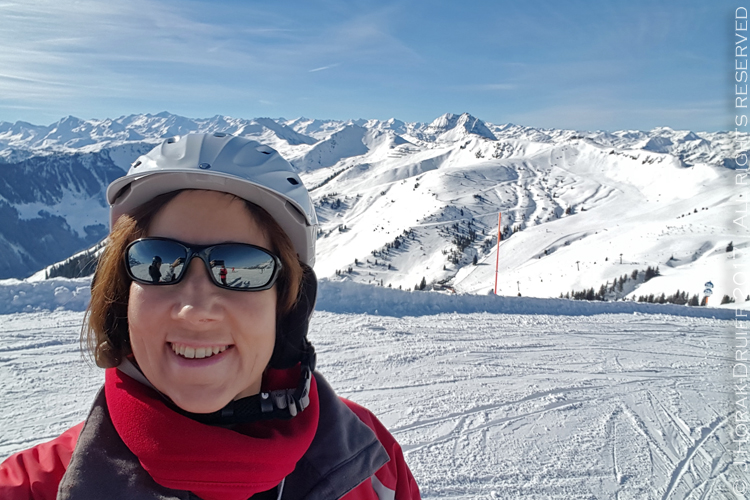 Kitzbühel is by no means the highest Alpine resort, with the village at about 800m and the highest point at about 2,000m But because of a combination of fortunate geography and extensive snow-making facilities, it has reliable snow and is traditionally one of the first non-glacier Austrian resorts to open for the season.  Because the city is set between the Kitzbühler Horn and Hahnenkamm peaks in a north-west facing dip, this means that the slopes face away from the sun and any snow that falls does not melt very rapidly. The fact that the slopes are covered in grass, rather than rocks, up to 2000 metres also means that far less snow cover is needed for the slopes to open.  And if mother nature does not play ball, the resort has 750 snow guns and cannons to ensure that the pistes remain pristine. 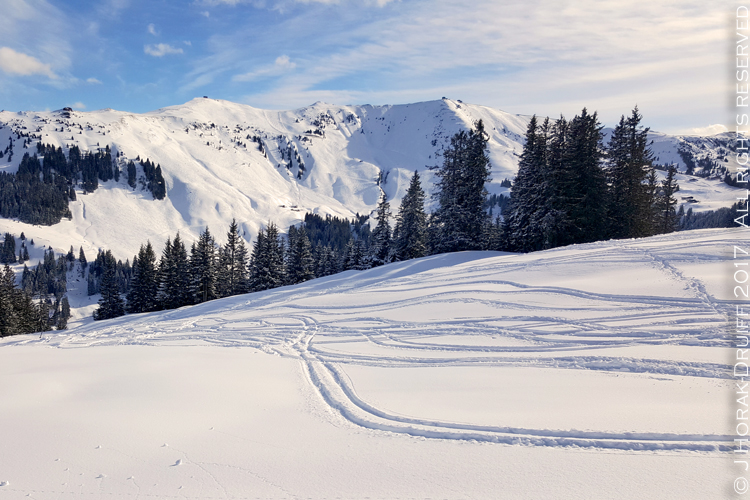 2.   To watch the famous Streif downhill ski race on the Hahnenkamm

The Hahnenkammrennen are the annual ski races, held since 1931, and have been a fixture of the men’s World Cup since 1967 and take place every year in mid-January.  The most famous is the classic downhill  course, the Streif , which is regarded as the most demanding race course on the World Cup circuit.  The 3.3km long course starts at an elevation of 1,665m above sea level and vertically descends 860m.  It is a highly technical course featuring reverse banked turns with limited visibility, as well as super-fast flat gliding sections preceded by difficult sharp turns.  At its steepest (at the infamous Mausefalle section) the gradient is over 40 degrees.  The course record is just under 2 minutes (and an average speed of 106.9km per hour!) but you can also ski a more sedate version of the course called the “family Streif” which is a red run rather than black and cuts out all the jumps and treacherous bits. 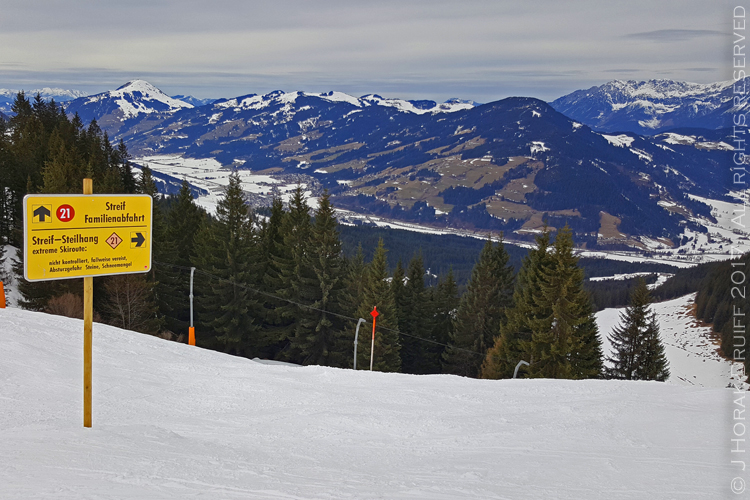 Unlike some purpose-built ski resorts, Kitzbühel is a real living, breathing city with an 700 year-long history. Originally established as a copper-mining town, it retains a beautiful pedestrianised mediaeval town centre and a number of historic buildings such as the side-by-side Catholic and Protestant churches.  There is also an abundance of good shopping, from the usual ski resort shops selling ski gear, souvenirs and local produce, to upscale boutiques like Louis Vuitton. 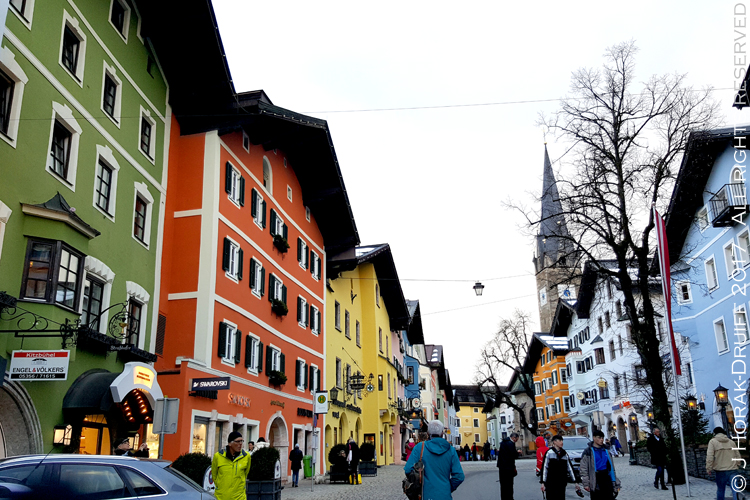 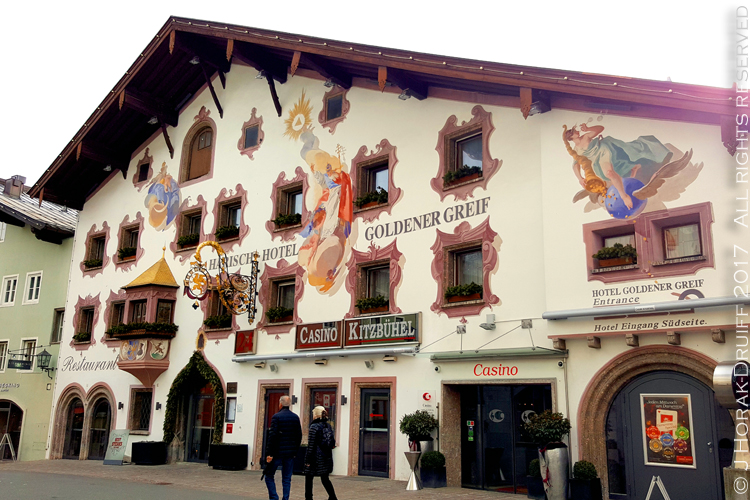 4.  To enjoy the excellent restaurants

The fact that Kitzbühel is a living,  breathing city means it has the population to support a wide range of restaurants, from cheap and cheerful mountain huts serving rustic local cuisine, to upscale fine dining restaurants serving food that would not be out of place in London.  Highlights include the Winkler brothers’ restaurant at Gasthof Auwirt in Aurach; the Ganserln Alm with its view over the city; and Neuwirt at the Hotel Schwartze Adler. 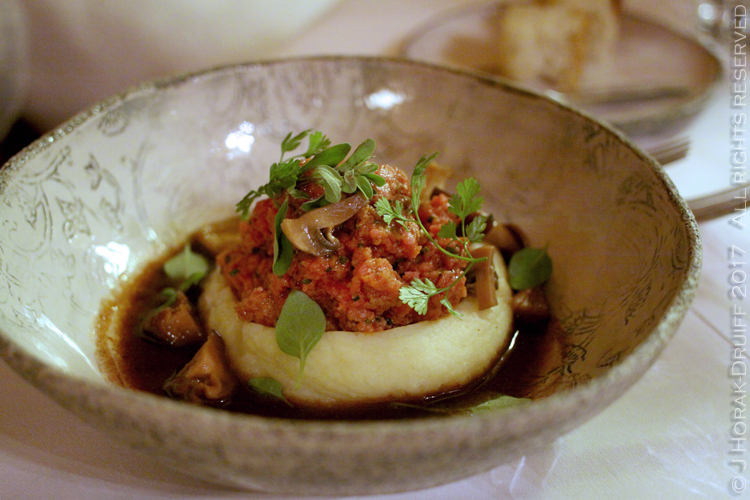 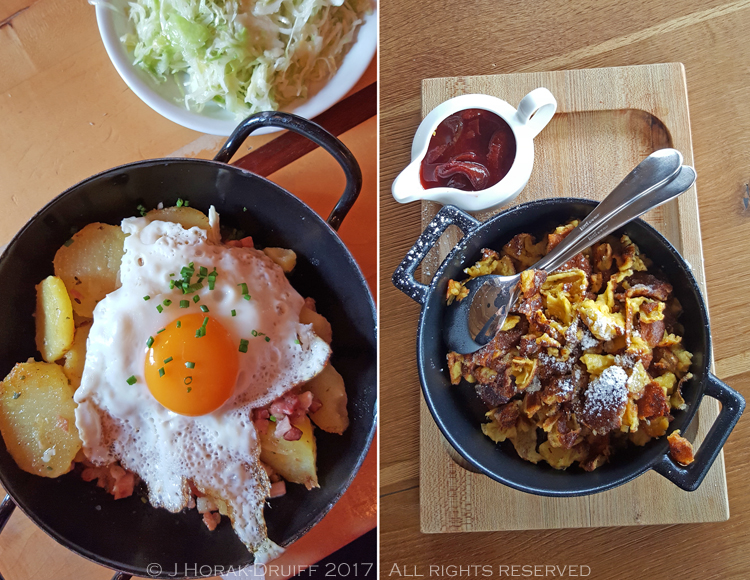 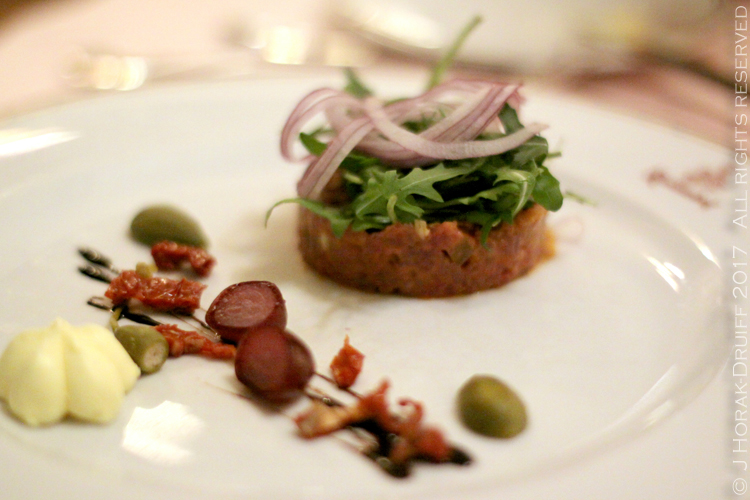 5.  To enjoy a variety of snow-based activities

Kitzbühel is understandably famous for its wealth of downhill skiing opportunities (see point 6 below) – but there are a number of other outdoor activities available to no skiers, some of which I tried.  There are 60 kilometres of well-marked (and well-used) cross-country skiing trails in and around Kitzbühel, including a high altitude trail and a floodlit trail.  We also tried snow-shoeing while we were there – an experience that I can best describe as running uphill on a soft sandy beach while wearing flippers. Still it provides an excellent workout and you can get through some surprisingly thick powder show when you have a pair of snowshoes strapped to your feet!  For the slightly less adventurous there is also winter hiking along the wealth of quiet and well-groomed trails in the area. Guided winter hiking/walking and snowshoeing tours are available from Monday to Friday throughout the season. The meeting point is at the Kitzbuehel Tourist Information Office, Hinterstadt 18, at 09:45 hours. 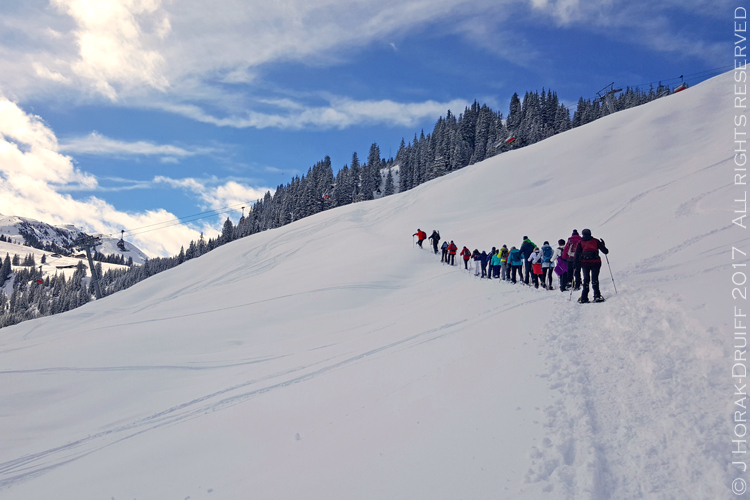 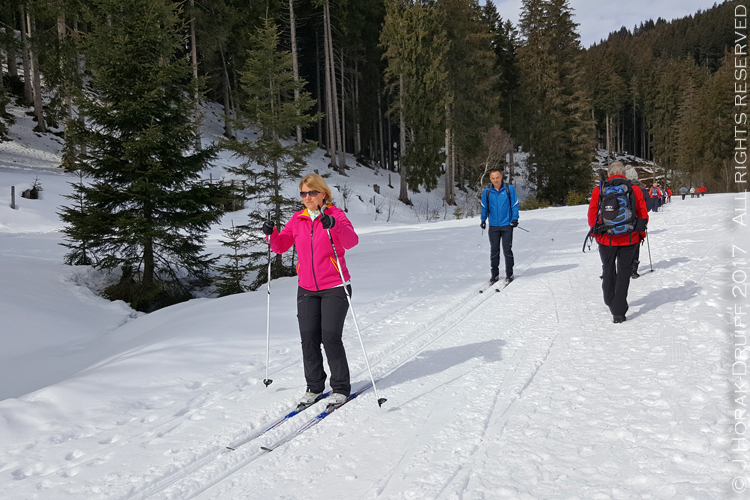 6.  An extensive system of modern lifts and well-groomed pistes

Kitzbühel has a total of 54 fast and modern cable cars and lifts serving its 179km of prepared pistes. Lifts are fast and high capacity, meaning queues are manageable even at busy times. But despite the Hahnenkamm’s fearsome reputation, the majority of Kitzbühel’s pistes are exceptionally family friendly (69 km blue, 77 km red, and 24 km blackl).  The blues and reds are wide, crusey and long – one of them is almost 7km long! Also be sure not to miss the spectacular 3S-Umlaufbahn (tri-cable gondola) which spans the 2.5-kilometre wide and 400-meter deep Saukaser Valley between the mountains Pengelstein and the Wurzhöhe.  It is little wonder that Kitzbühel  has been voted Best Ski Resort in the World on a number of occasions! 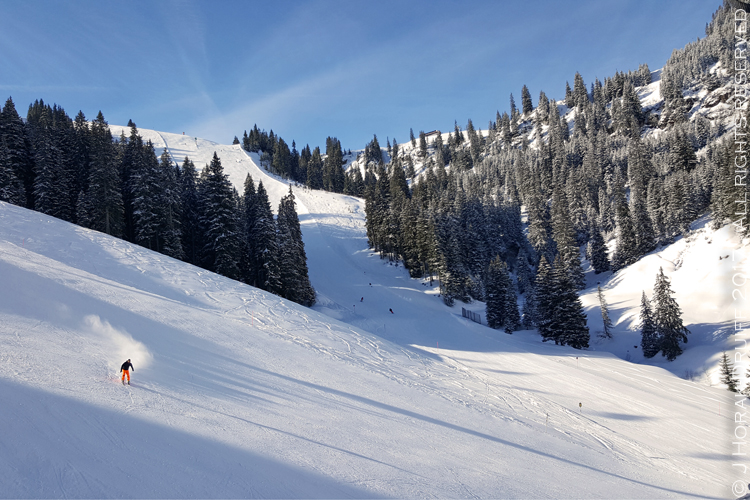 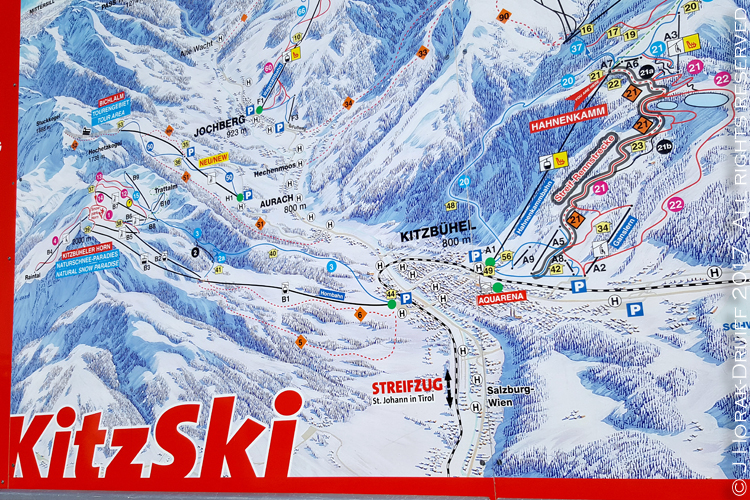 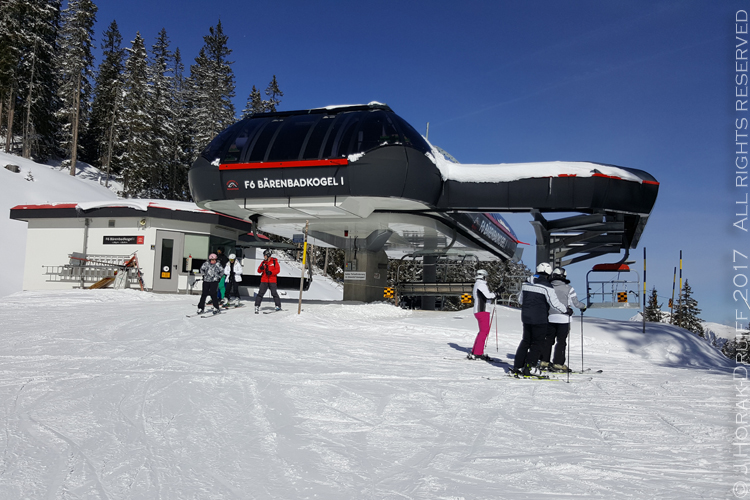 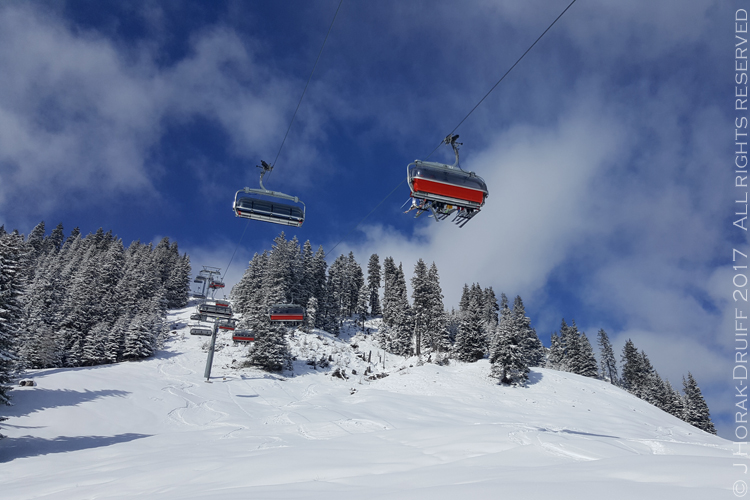 7.  To experience a range of Winter activities and events

During the winter months there is a packed programme of events including a traditional Christmas market; a fireworks display at New Year; the Hahnenkamm downhill; the Snow Polo World Cup and (during the week that we visited) the Streif Vertical UP. In this patently bonkers night race, participants start from the finish area of the Hahnenkamm downhill ski race and run 3.3 kilometres UP the piste, climbing 860m in the process, to reach the start gate. The winner is whoever reaches the top first, by any means excluding motor powered assistance; and by any route they choose.  It is quite a sight to watch the start of the race on the piste and then watch the little bobbing headlights as they run up the icy mountain in the dark (and sometimes roll down, taking out other participants like skittles!). 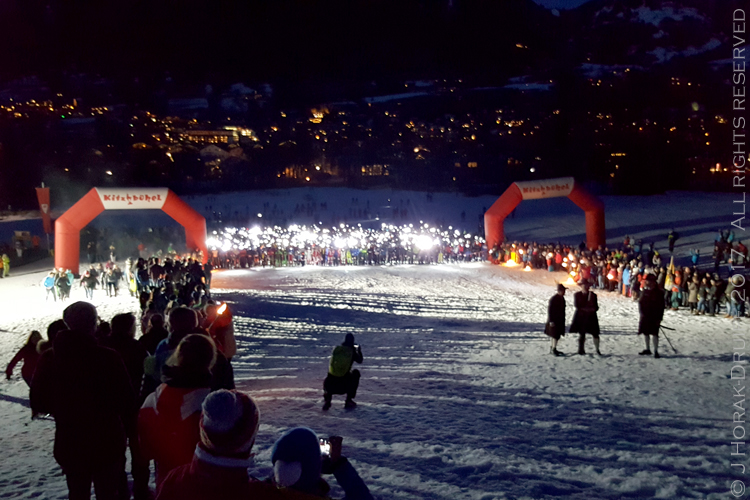 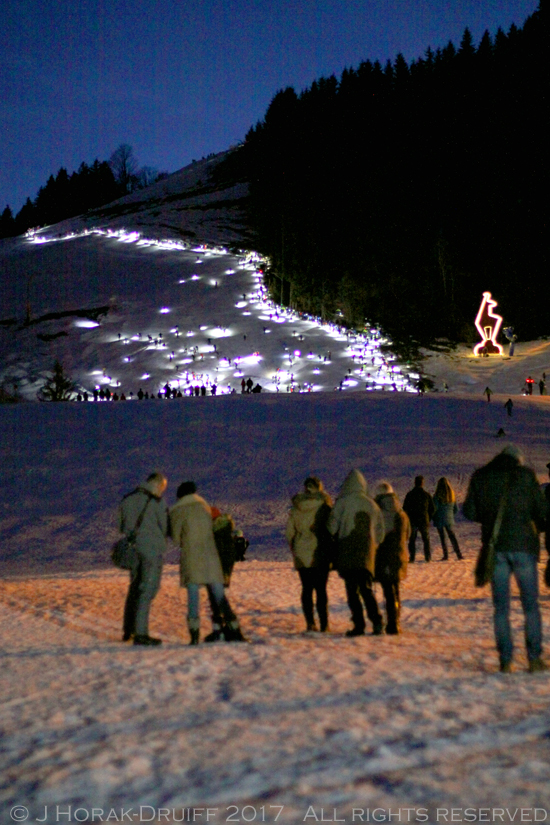 Having experienced the resort for myself it is little wonder to find that that Skiresort.de, the world’s largest test portal for ski resorts, has voted the Kitzbühel ski area as the “best ski resort in the world” in 2013, 2014 and 2015.  So if you are still looking for somewhere to have a late-season ski break, Kitzbühel is a resort that will tick all your boxes.  The closest airports are Innsbruck (97km/1hr), or Munich (165km/2hr).  There is also a train station in town served by a number of express trains.  For more information, see the Kitzbühel website.  And for another perspective on our Kitzbühel trip, have look at this brilliant post by Milou, the Dutch blogger who was with me on the trip.  I had never met her before but after 7 days we left as best friends (more like sisters separated at birth!) and we still chat every day.  As soon as you catch her sense of humour in the post you will know why we hit it off!

DISCLOSURE:  I visited Kitzbühel as a guest of Kitzbühel Tourism and was compensated for my time.  I was not expected to write a positive review – all views are my own and I retain full editorial control.