You are here: Home / Travel / Singapore / Nine things you need to eat in Singapore Before I visited Singapore for the first time, I had heard all the clichés about it – that is was incredibly, almost clinically clean; that it was a massive shopping mecca; and that chewing gum is officially banned.  All these things turned out to be true – but they also turned out not to be the things that stuck in my memory once I had visited.  Instead, I returned home astonished by the extent of Singapore’s cultural diversity; besotted by the completely-not- clinically-clean sounds, smells and tastes of Little India; and in awe of the Singaporeans’ obsession with food.

In Singapore, eating (or makan in the local dialect) is not just sustenance – it’s a national obsession.  So much so that when friends (or even strangers) meet, instead of saying “hello” or “how do you do?”, they will greet each other by saying “sudah makan” which means “have you eaten?”  And what an array of food there is for them to choose from!  Singapore offers dining options from the eye-wateringly priced find dining variety right down to £3,00 meals in the many hawker centres.  I have tried both and both can be equally satisfying, but while the fine dining options tend to be of a more international flavour, it is in the hawker centres where you will find the true flavours of Singapore.  If you have not yet had the pleasure of exploring the Singapore food scene, here is my completely subjective list of foods you need to try if you visit. 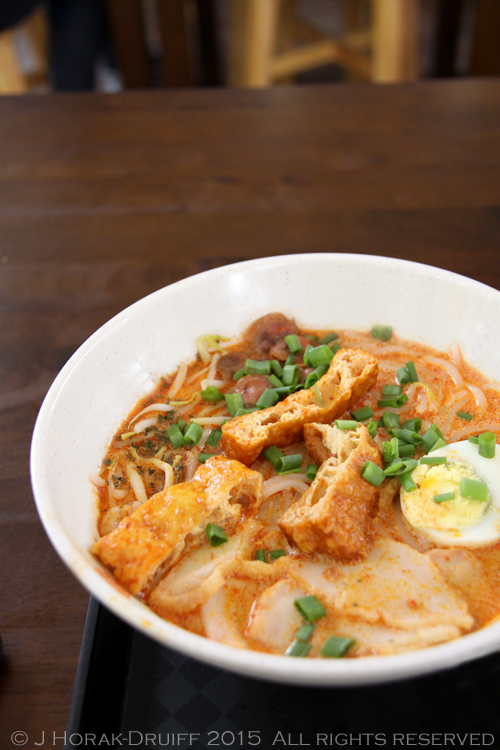 Curry laksa (sometimes simply called laksa or, in Singapore, Katong laksa) is a coconut-based curry soup containing vermicelli or rice noodles, bean curd puffs, bean sprouts, fish sticks, shrimp and cockles as well as boiled egg (and sometimes also chicken). It is commonly served with a spoonful of sambal chilli paste and garnished with Vietnamese coriander, or laksa leaf.  There are a few variations on the theme such as Assam laksa (sour and spicy fish and noodles in a tamarind-spiked broth) but my favourite remains Singapore laksa – one of my ultimate comfort foods and probably the food I crave the most when I visit Singapore. 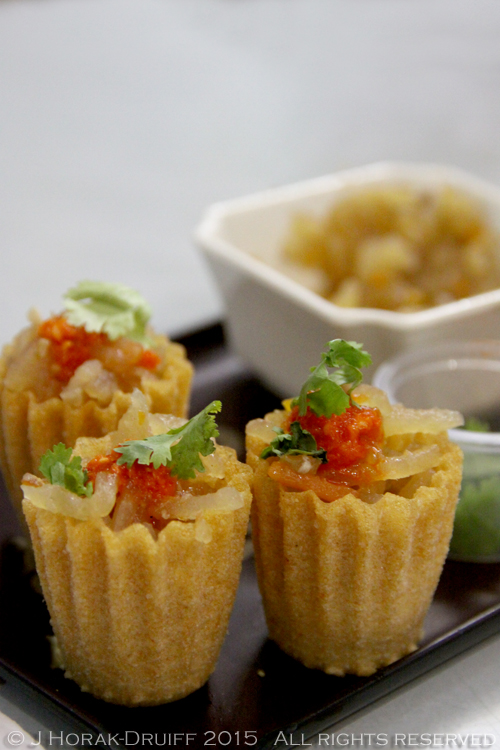 One of the main culture and cuisines of Singapore is Peranakan or nyonya – a style of cuisine which developed out of the fusion of local Singaporean cuisine with that of early Chinese immigrants to the island.   A classic snack in this cuisine is kueh pie tee, small crisp deep-fried pastry cups that are filled with a mixture of slow-braised Chinese cabbage and carrot before being topped with sprouts and chilli sauce. These little bite-sized cups are soft, crunchy and spicy all at once – what’s not to like? 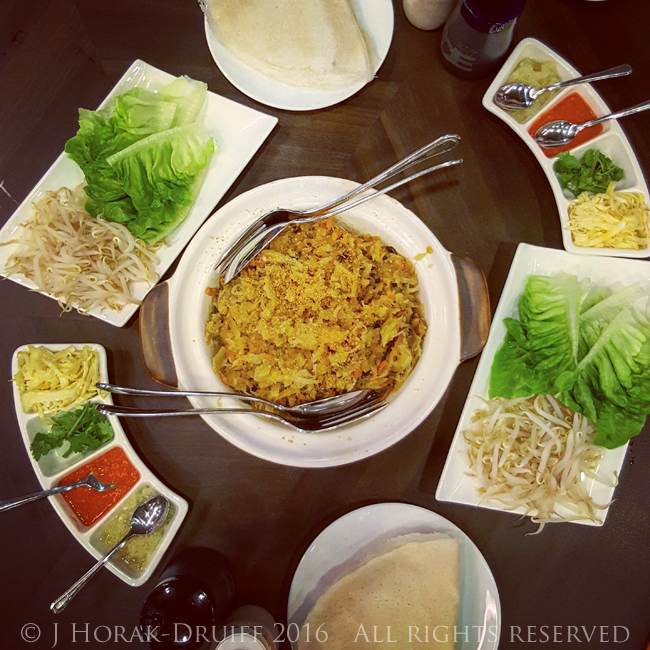 Popiah are another example of Peranakan cuisine and are the Singaporean version of spring rolls.  The wrappers are are nearly translucent paper-thin pancakes and they are traditionally filled with a mix of slow-braised vegetables (turnip, cabbage, carrot, bamboo shoots and garlic) seasoned with shrimp paste, as well as lettuce, fresh bean sprouts and chilli sauce before being rolled up.  Most hawker stands will sell them ready-rolled but we visited the Good Chance Popiah House where we got to roll our own (hint:  it’s harder than it looks!). Some places also serve popiah with non-traditional fillings like chicken and wasabi – also delicious. Chilli crab has been promoted by The Singapore Tourism Board as one of Singapore’s national dishes and is probably the one dish that people associate most strongly with Singapore.  Mud crabs are stir-friend in a thick sweet and savoury tomato-chilli sauce and served with generous amounts of the same sauce and deep-fried breadrolls to mop it all up with.  The dish is deliciously messy as it is usually eaten with bare hands to facilitate the cracking of the crab shells to get at the sweet meat within, and it is served in seafood restaurants all over the island. Despite its name, chilli crab is not a very spicy dish but if you are of  nervous disposition, a black pepper crab version is also widely available. Hainanese chicken rice is another  iconic Singaporean dish that sounds deceptively simple – plain boiled chicken and rice.  But when you try a properly prepared version you will quickly understand why locals wax lyrical about it and will crave it when they are not in Singapore. According to the traditional Hainanese method, the chicken is poached at just below boiling point until cooked and in Singapore the cooked bird is then placed in an ice bath to produce a jelly-like, pale skin. The stock left over after poaching is skimmed off along with some of the fat.  Together with ginger and garlic this is used for cooking the rice, resulting in a flavourful rice sometimes called oily rice.  The sliced chicken is then served together with the oily rice, chilli, garlic and ginger.  I tried the version pictured at Chatterbox restaurant in the five star Mandarin Orchard hotel, but far cheaper versions.  But you’ll find the same dish for sale at hawker stands and cafes throughout Singapore. You might say that satay is the original dish that foreigners associated with Singapore.  These delicious skewers of marinated and barbecued meat originated in Indonesia but since the 1940s they have been a popular snack in Singapore, sold from makeshift roadside stalls and pushcarts – the original street food. In the 1950s, health concerns led to tighter regulation and a consolidation of the stalls on a single location on Beach Road (later to Esplanade Park) called Satay Club.  Satay Club was only open after dark and was listed in many tourist guides, turning the dish into an attraction in its own right.  Satay club no longer exists but the insatiable appetite for the skewers continues and chicken, beef and mutton satay are sold at hawker centres across the island. The dish is so much a part of Singaporean culture that Singapore Airlines serves satay as an appetiser to its Business Class and First Class passengers, and they have a dedicated satay kitchen at their flight catering facility. Roti prata is a ghee-flavoured fried flatbread of south-Indian origin that is hugely popular in Singapore and Malaysia and that is usually served with a generous ladle of vegetable or meat curry.  The island is full of roti prata stalls and the texture f the dough varies widely between them – from pillowy; to chewy inside and crisp outside; to thin, crispy and flaky.  Prata making is an art as the maker has to twirl the dough until it is paper-thin before folding it into a rectangle and frying it on a greased griddle.  Roti prata is usually eaten with the hands – definitely not first date food but oh so delicious! This is another Peranakan dish consisting of chicken stew cooked using the nuts from the kepayang tree, a type of mangrove that grows in Indonesia and Malaysia.  The fresh fruit and seeds are a bit like the plant kingdom’s fugu fish:  they contain deadly poisonous hydrogen cyanide and must first be rendered harmless by careful preparation.  The seeds are first boiled and then buried in ash, banana leaves and earth for forty days, during which time they turn from a creamy white colour to dark brown or black. The kernels can then be ground up to form a thick black paste which is used to give the buah keluak stew its distinctive almost black colour and slightly spicy flavour.  Good places to try it are at Peranakan restaurant Candlenut and  Kim Choo Kitchen. Bakkwa is a Chinese dried meat snack with both sweet and salty flavours.   It originated from the Fujian province in China where it is considered a Hokkien delicacy but it is also hugely popular in Singapore where production has changed somewhat over the years and taken on local characteristics.  Rather than being air-dried as was traditionally done in China, in Singapore bakkwa is instead marinated, smoked and then grilled over charcoal, imparting rich and complex flavours to the meat.  The Singaporean version of bakkwa ia also sweeter than in China and local twists such as chilli bakwa are available.  I always get my bakkwa fix from Bee Cheng Hiang.