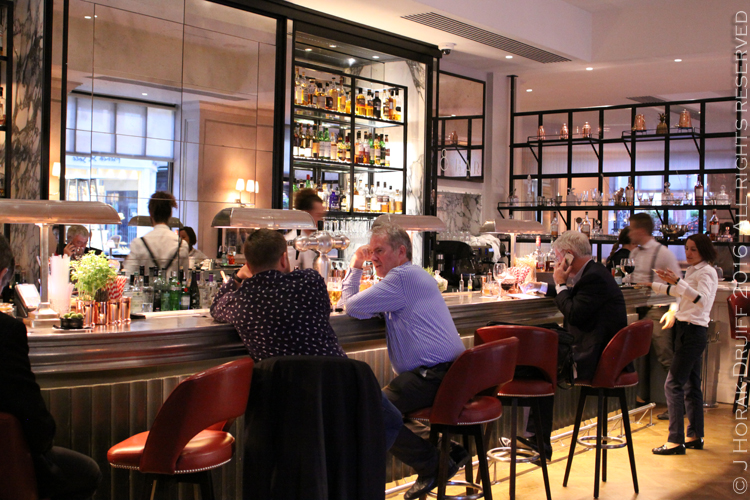 Did you know that, despite their almost interchangeable current useage, there is technically a difference between brasserie and a bistro?  Fair enough, it is possibly only French foodies who could tell you the difference off the top of their têtes, but even our best friend Wikipedia has an entry about the different types of eating establishments.  A bistro is apparently a small informal restaurant with simple food, usually with a single owner or chef-owned, open at set times for lunch and dinner rather than all day.  Depending on who you believe, the name derives wither from bistrouille (a liqueur coffee aperitif served in such restaurants) or from when Cossack officers during the Battle oF Paris in 1814 felt their food was too slow to arrive and yelled “Bystro! Bystro!“, which means quickly in Russian.  A brasserie, on the other hand, traditionally serves the same menu all day with perhaps a few plat du jour specials and because the word literally means a brewery, most traditional brasseries also serve a good selection of beer on tap. Both are, of course, subdivisions of the broader term restaurant, which denotes anywhere that has table service.

108 Brasserie, located in The Marylebone, just north of Bond Street, may not brew beer and may not serve the same menu all day – but they are open seven days a week all day for breakfast, lunch and dinner and there is certainly a good selection of beer, wine, spirits and cocktails available.  The room is divided into a bar area and a restaurant area, both designed by Alexander Waterworth Interiors to reflect 108 Brasserie’s traditional style with a modern twist.  I loved the red leather bar stools, dining chairs and banquettes which together with the dark-stained curved oak bar and lovely honey-coloured parquet floors create a styling traditional interior but with a modern twist.  We started in the bar where we were hugely tempted by the cocktail menu (a nice selection of signature and classic cocktails priced at around £10) but in the end we restrained ourselves – I had a Woodford Reserve bourbon (£11,00) from their small but interesting selection; and Rosana had a glass of English Nyetimber sparkling wine (£11.50). Although the first glass poured was distinctly un-bubbly, a fresh bottle was opened and the glass replaced immediately when we mentioned this. There is a weekly changing menu of small plates available  available in the bar. 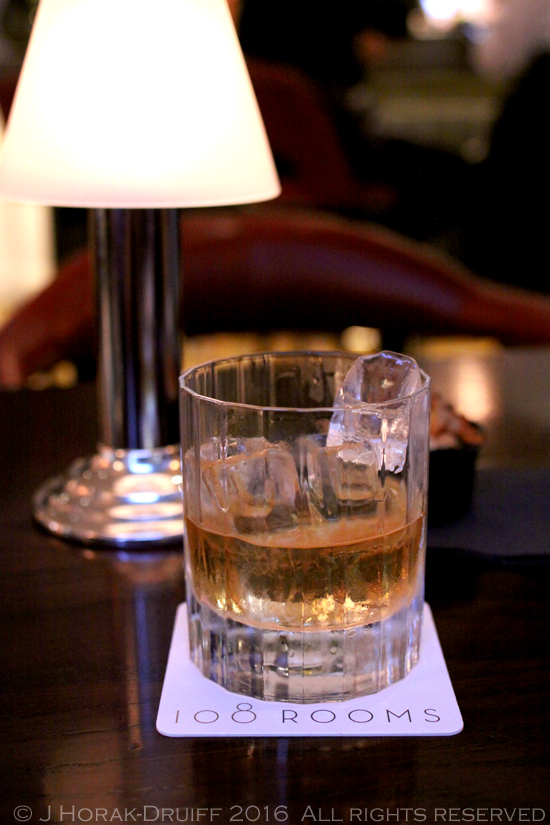 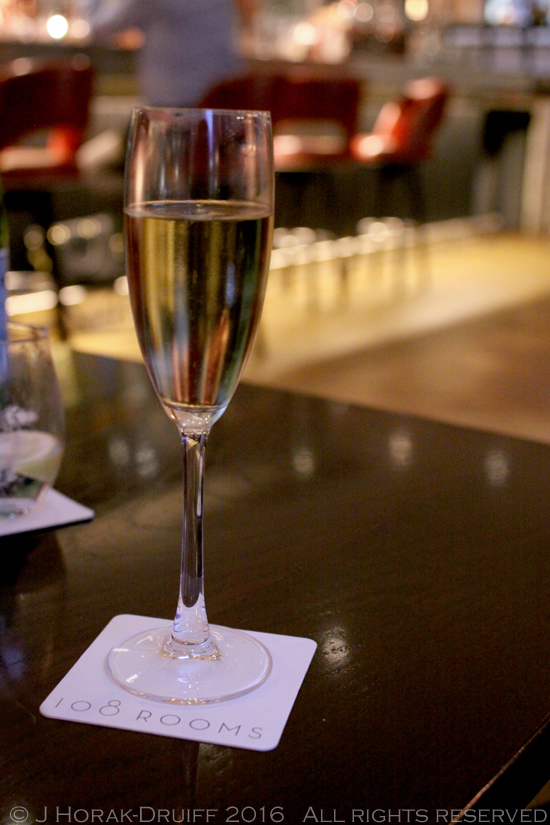 From there, we moved to our table in the dining area and had a look at the menu.  Chef Russell Ford’s passion for respected local suppliers (like Aubrey Allen meats and Upstream seafood) and seasonal British cuisine is evident.  In fact, Chef Russell is so committed to the idea that each month he creates a bespoke dish to showcase the very best of seasonal produce and modern British cuisine, which dish is then available in the restaurant as a special for the entire month. But before we get to that, we were served a selection of breads baked in-house while we looked at the menu:  sourdough, wholemeal Irish soda bread, and Guinness  bread. The soda bread was delicious but it was the dense, dark and slightly sweet Guinness bread that would sin over the heart of the most ardent carb-avoider. And as a perfect accompaniment, we were served a pat of delicious Abernethy butter.  I visited Will and Alison Abernethy at their farm in beautiful Co Down outside Belfast last year and witnessed first hand the passion and dedication that goes into making this artisan butter – and it shows in the gorgeous finished product! 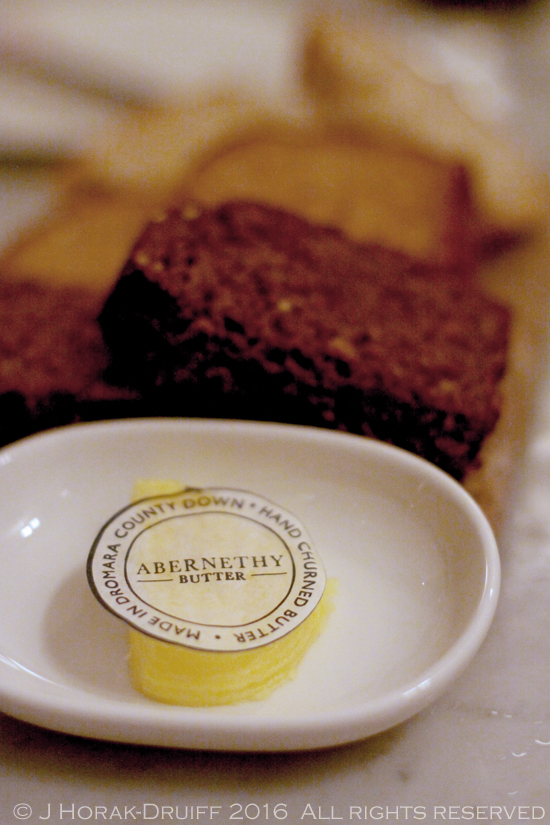 Our waiter, an extremely charming (but sometimes a little overwhelming!) Hungarian chap suggested that we might want to try a selection of starters and so we opted for three (one of which is actually on the mains menu but is available as a half-portion for a starter).   The burrata with cherry vine tomatoes, extra virgin olive oil and country loaf & crostini (£15,00) was decadent perfection.  The wobbly ball of cheese collapsed softly into a puddle of sweet mozzarella and cream as we cut into it, perfect for dipping the crostini into and contrasting with the flavourful lightly roasted cherry tomatoes. The platter of Trealy Farm charcuterie (£10,00 small or £15,00 large) was hugely impressive and included bresaola, smoky cured pork loin, and an excellent salami, accompanied by a small bowl of pickles and slaw. But the star of the show was surely the grilled tiger prawns harissa & lime (£15,00).  These were done on the Josper grill which lent a deep and delicious smokiness, and the spicy harissa was the perfect foil for the sweet flesh of the plump prawns. 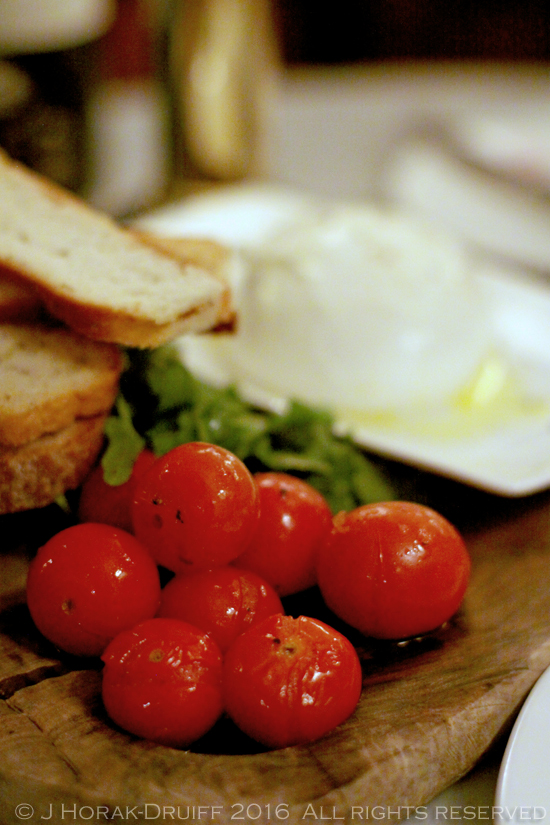 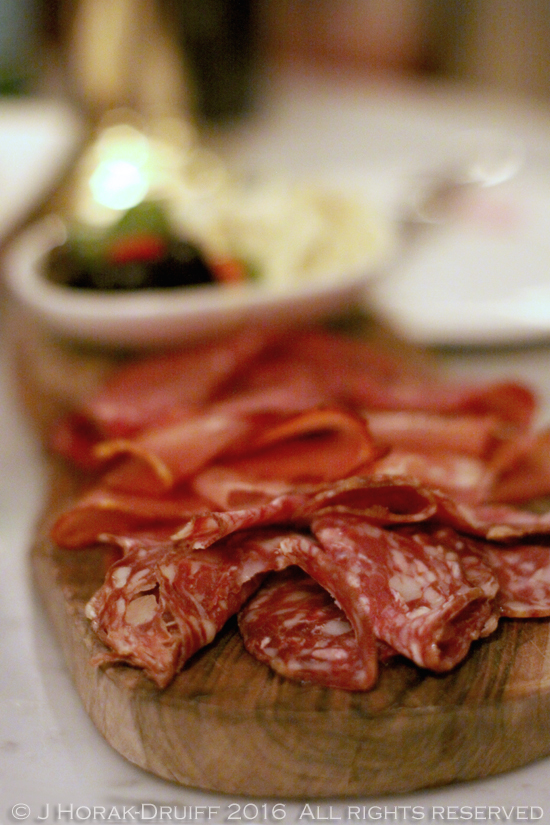 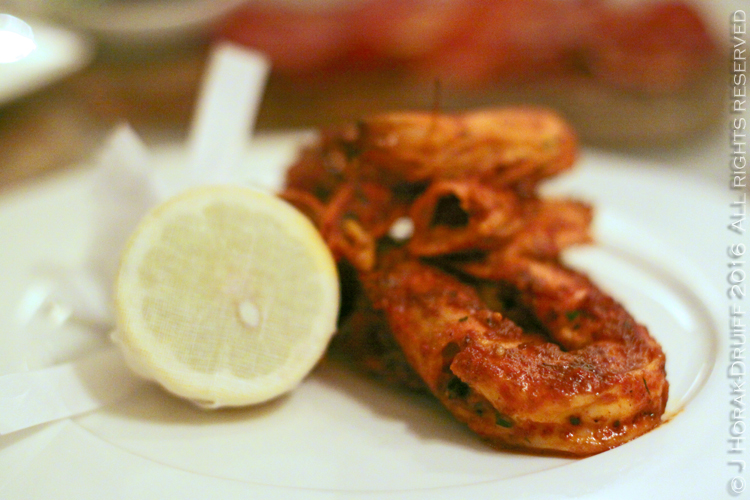 The dish of the month for September was a deliciously seasonal Balmoral Estate venison Wellington with Savoy cabbage (£30.00).  This was a seasonal twist on a more traditional beef Wellington and rather than being served as slices of a larger piece of meat, these were individual Wellingtons.  Perfectly flaky pastry parcels lines with mushroom duxelle encased a piece of venison cooked absolutely spot-on: juicy, moist and flavourful rather than dry as venison can sometimes be.  This was served simply with some wilted Savoy cabbage and a meaty venison jus.  Probably one of the best ways of serving venison that I have ever eaten.  To accompany this, our waiter had chosen a bottle of 2014 Paolo Conterno Dolcetto d’Alba (£36.00), a fruit-driven but still rather young and tannic Italian red.  While it matched the venison dish well, I was less impressed with it as a match for the starters. 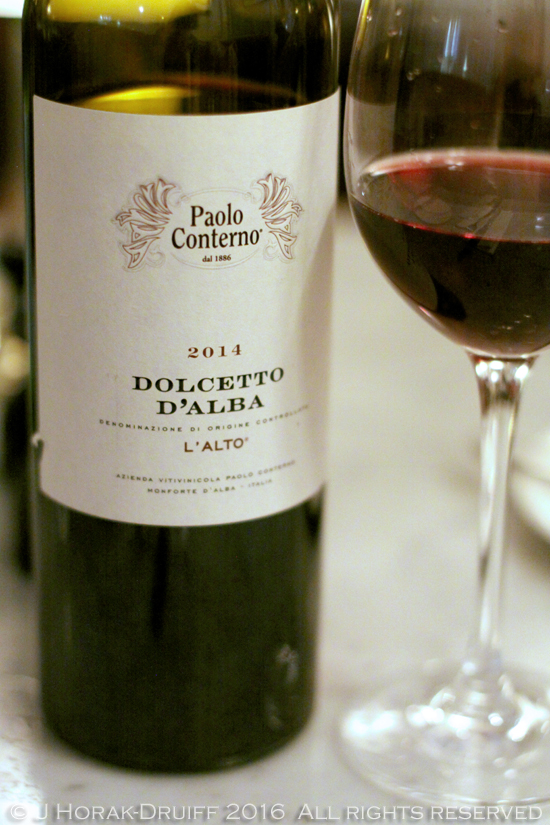 For dessert, Rosana chose to have the board of La Fromagerie cheeses with tomato chutney (£10,00) while I could not resist the warm chocolate fondant with peanut butter ice cream (£7,00).  The cheese plate consisted of  five different cheeses ; a generous dollop of excellent and flavourful tomato chutney and a slice of quince paste (membrillo). Sadly, our waiter was unable to give us much detail on the cheeses and the staff member that he went in search of who might have known more, never materialised. So, very generally speaking, there was a creamy blue; a delightfully ripe and creamy Brie (or perhaps an English Brie-style cheese); a hard cheese that tasted very much like an aged Comte; an excellent Cheddar; and a slice of firm, aromatic semi-soft goat cheese.   My chocolate fondant was a tad overbaked for my liking: rather than a lava-like stream of chocolate as you breached its defences, the runny interior had to be coaxed out like a hesitant tortoise.  It was tasty though, and the excellent peanut butter ice-cream was a treat. 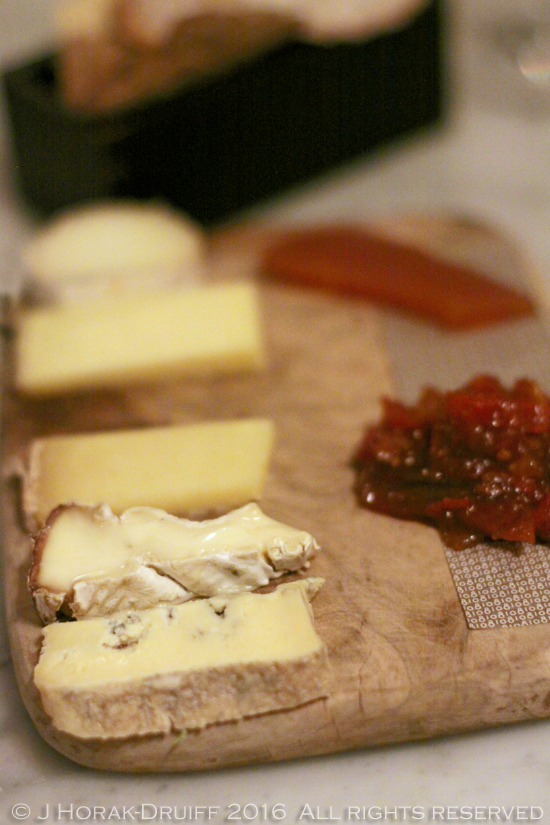 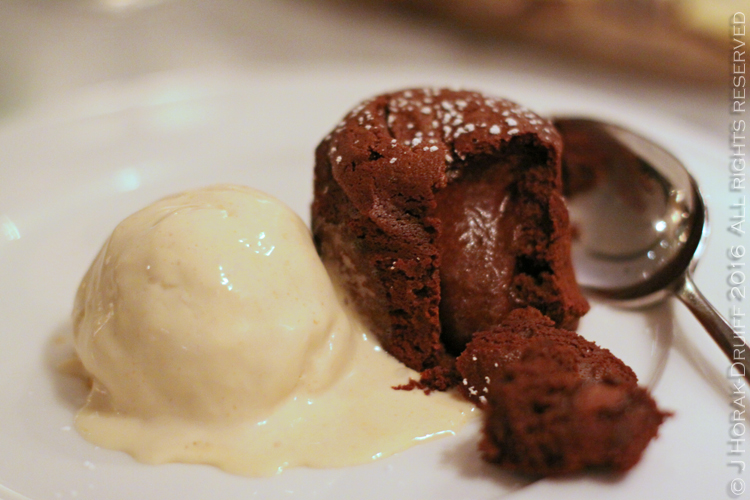 Overall, I loved the space and our meal was very good, barring the couple of niggles listed above. The service was charmingly enthusiastic, but after you have been called “m’lady” for the tenth time and heard the same sales patter for the same dishes being recited to the table next to you,  it does become a little wearing. The lack of information on the cheeses was a little disappointing, as was the total blank we drew when we asked where Trealy farm is (it’s in Wales, Google tells me).  But overall we really enjoyed the meal and the ambiance, and Chef Russell is obviously a steady and assured hand in the kitchen.  The dish of the month is available until 30 September, after which it will be replaced by the October dish of the month: Josper-grilled dry-aged porterhouse steak, baked bone marrow, hand cut chips and Stilton butter (£65 for two people). For those with smaller appetites, the Bar area offers a weekly changing menu of small plates such as crispy salt and pepper squid served with chilli and lime; Cornish crab on Guinness brown toast with apple; or baked camembert with roasted garlic and rosemary. The wine list features more than 40 wines mostly European but with a smattering of New World – most falling in the £30-£50 price range.  Chef Russell will be tweeting (@chefrussford) and instagramming (@russell_ford) his monthly dishes with the hashtag #108dishofthemonth so keep an eye out to see what delights the next few months will bring.

108 Brasserie
108 Marylebone Lane
London
W1U 2QE
Tel.: +44 (0) 207 969 3900
DISCLOSURE:  I enjoyed this meal as a guest of 108 Brasserie but received no further remuneration to write this post.  I was not expected to write a positive review – all views are my own and I retain full editorial control.