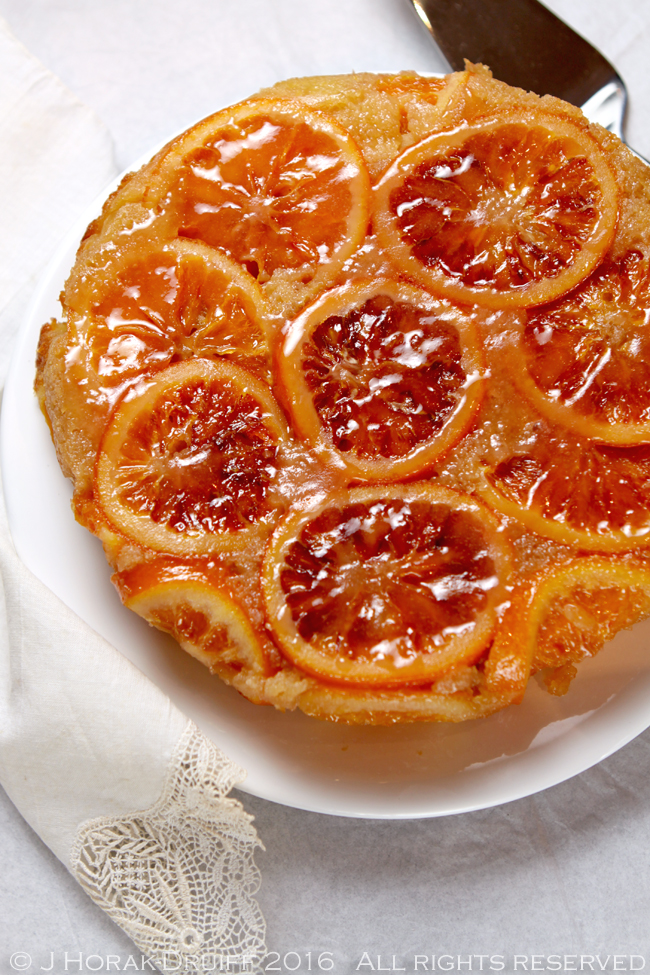 Ask people what they know about famous illusionist and escapologist Harry Houdini and they will probably mention two things. The first is his famous Chinese Water Torture Cell escape, where he was lowered upside down and with feet manacled into a glass-walled contraption resembling a fish tank. This was then filled with water in full view of the audience, sealed and draped with a cloth.  Despite it looking like an impossible endeavour, within two minutes Houdini would emerge from underneath the cloth, wet but unscathed. The other thing that most people will know about Houdini is how he died. During his career he boasted of being able to withstand any blow to the abdomen. On 22 October 1926, two students visited him in his dressing room and asked him if this was indeed true.  Houdini replied that it was, provided he had time to brace himself and tense his abdominal muscles. Immediately and without warning,  one of the students punched him four times in the lower abdomen, before he had time to brace. The blows left Houdini in severe pain but he refused medical treatment and continued to perform for a further three days until he passed out backstage at the end of a show.  When he was finally taken to hospital, it was found that he had appendicitis and a ruptured appendix.  Although doctors operated, the burst appendix had caused peritonitis and he died in hospital on 31 October, according to the coroner, of infection but in the public imagination, from a sucker-punch.

A sucker-punch is the one you don’t see coming: the bushwhack, the ambush, the blindside. The term is said to derive from sucker referring to a very young and naive animal, still suckling from its mother, and is generally taken to include not only a literal punch as in Houdini’s case but also anything else that takes you completely by surprise. The car that comes flying through the red light to collide with the side of your car. The flying tackle from behind as you are sprinting for the try-line, rugby ball in hand.  The unbidden flash of memory, triggered by a random smell or sound. The unannounced knock on the door in the night bringing bad news. A declaration of love from an unexpected source like a bolt of lightning on a clear summer’s day. 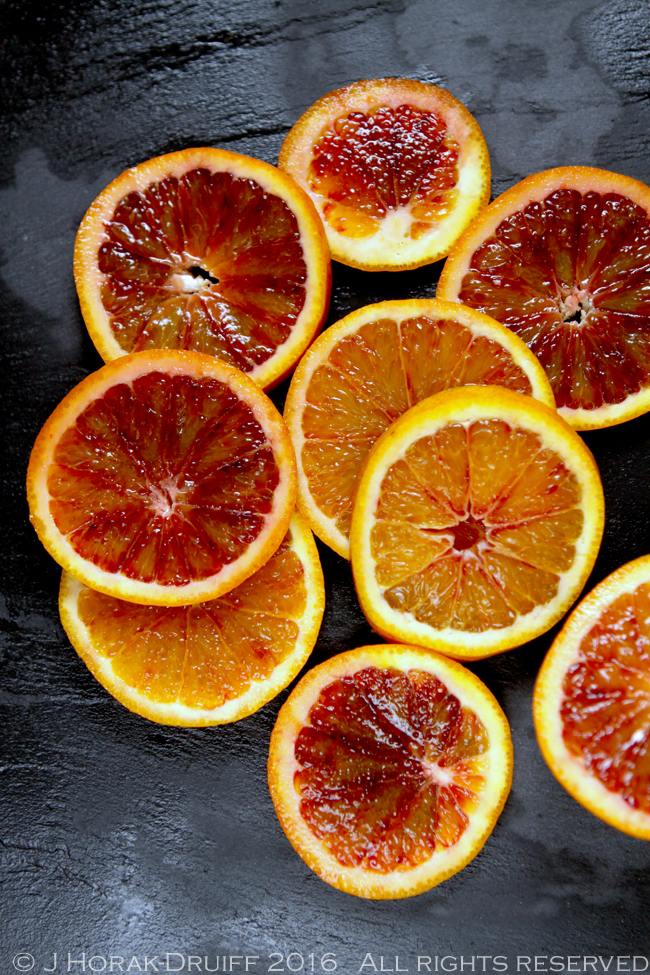 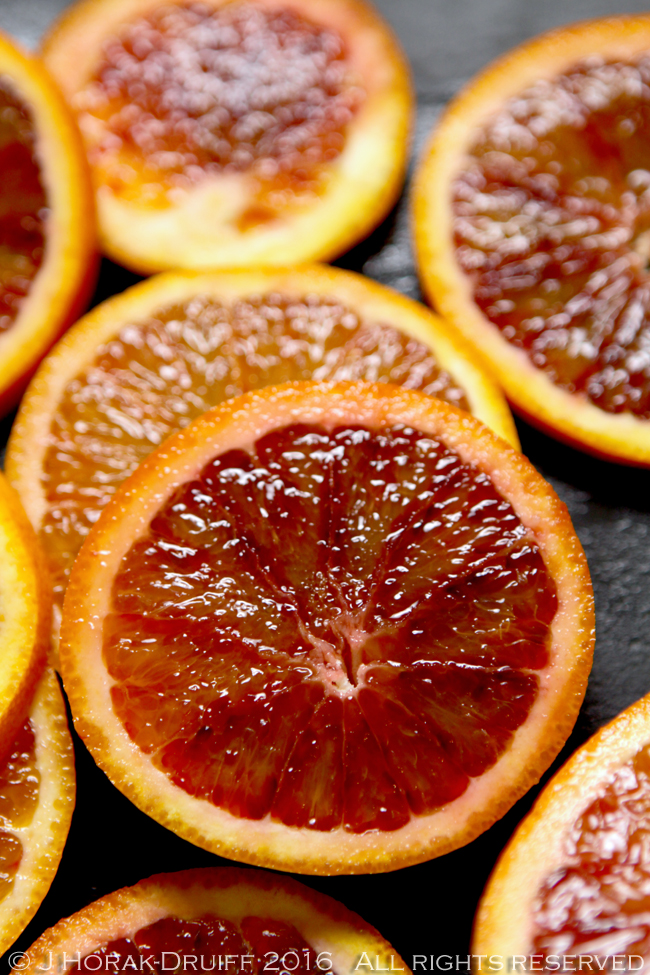 The culinary world provides a few sucker-punches of its own – in fact much of the world of playful molecular gastronomy relies on them.  Just think of Heston’s iconic egg and bacon ice-cream – dishes that sound or look savoury, but turn out to be sweet.  Or the cautionary tale of my brother who, years ago, came home to find my mom had been baking and that there was a pile of little round pastries sitting on the kitchen counter.  One had some red oozing out of it so he assumed that they were mini cherry pies and popped one in his mouth… only to find that they were her famous cheese olives and that the interior comprised a very un-sweet pimento-stuffed olive! One of my favourite culinary surprises is the blood orange.  Almost indistinguishable from a normal orange on the outside. you need to commit to cutting into them to discover the hidden secret of their crimson flesh.  And even then there is no guarantee of just how crimson each fruit will be – just one look at the pictures above.  The flesh ranges from plain old orange with the merest hint of red to full-blown blood red and everything in between. Like life, each blood orange is a surprise waiting to be discovered. 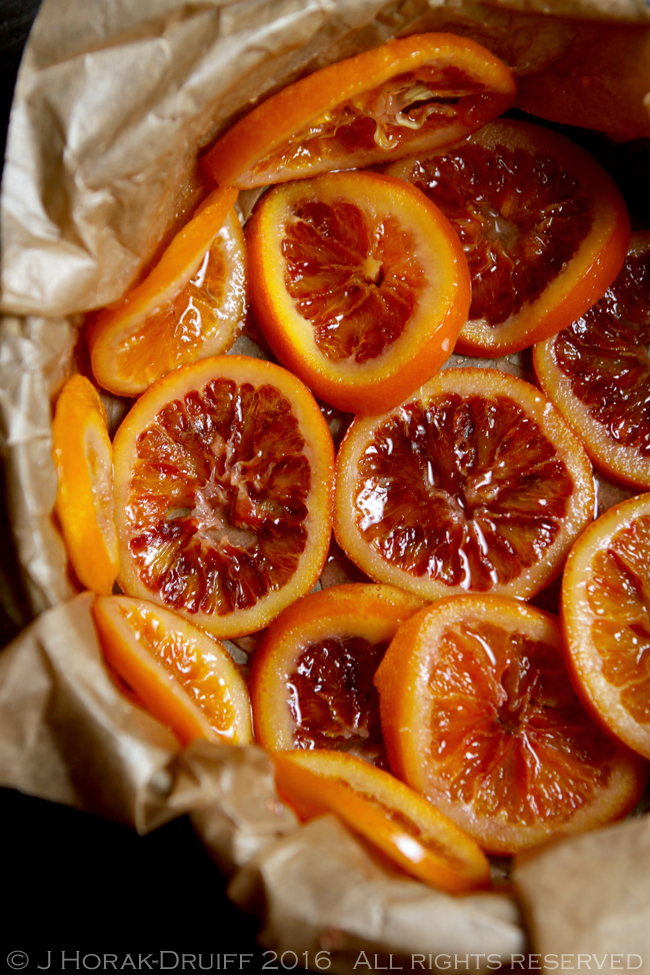 When I picked up a small bag of blood oranges at the market earlier in the summer, I spent a few days resisting the temptation to just gobble them up and tried to think of what I could make that would do them justice.  Salads and salsas are all very nice, but for a change I wanted to make something sweet and preferably something that would show off the colour of the oranges.  What better plan, then, than an upside-down cake? Originally I had wanted to make a polenta-based cake but as usual, lack of advance planning meant that on the night that I wanted to  bake, there was no polenta to be found in the house – so an almond flour and plain flour it had to be.  This cake contains yoghurt (I’ve also seen others with buttermilk or sour cream) which makes for a dense, moist and rich crumb – the perfect foil for the boozy blood orange topping! It keeps for a few days in the fridge in an airtight container, but to get that glistening stickiness on the orange slices you will have to serve it still slightly warm. 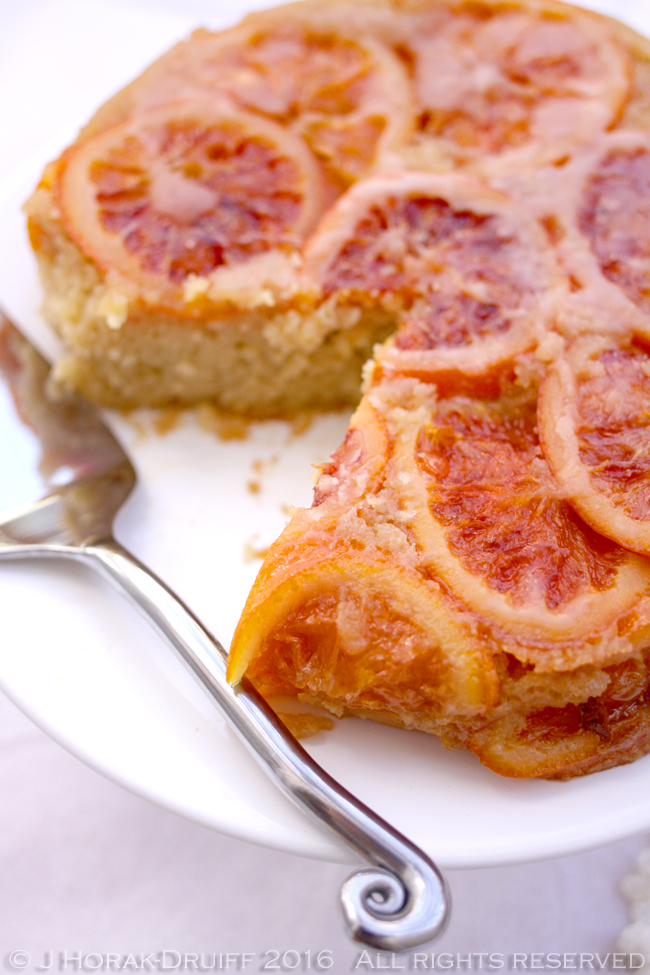 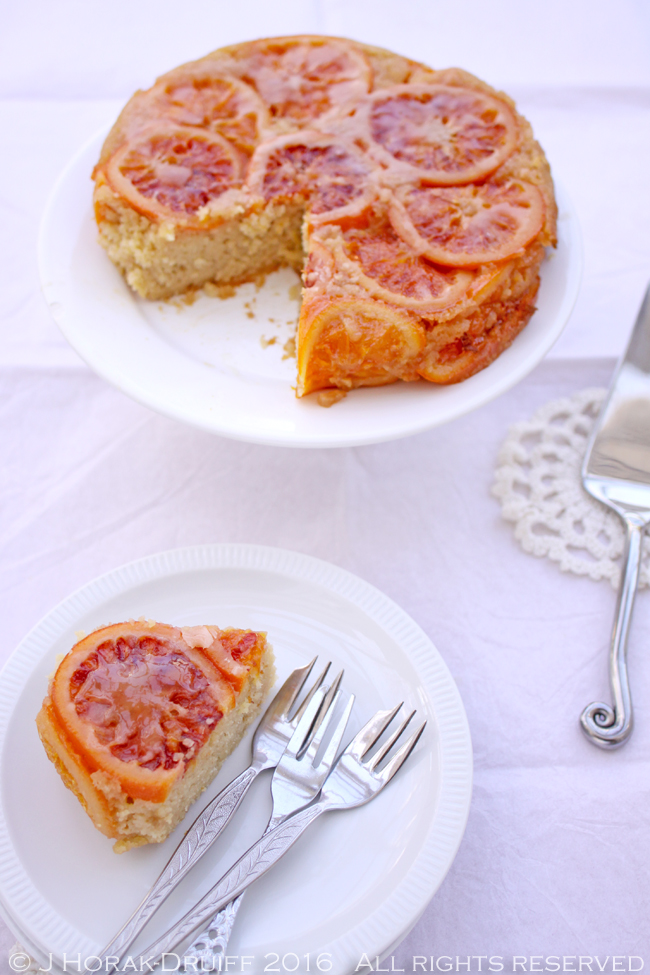 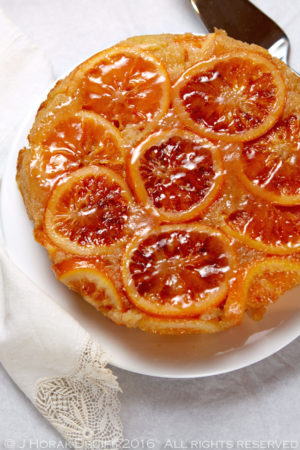