You are here: Home / Shows, launches and events / The Table – a clementine-themed adventure 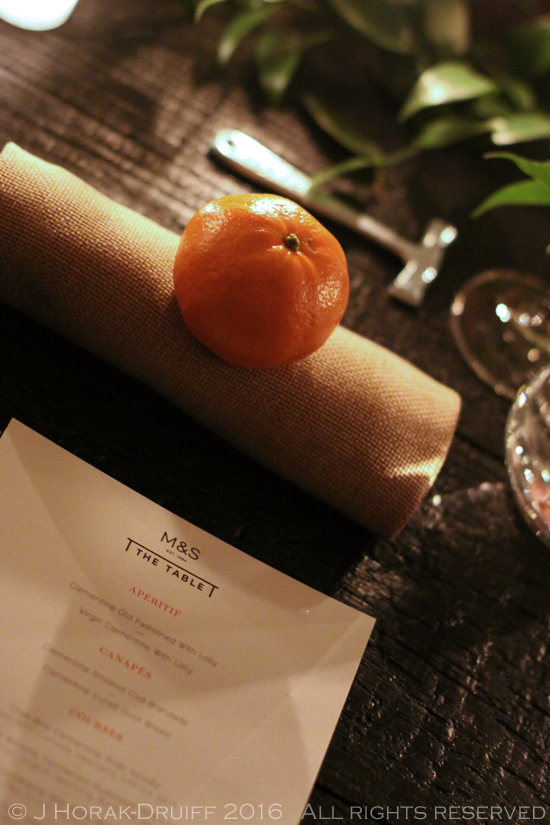 I recently explained to somebody what an orangery is. “Really? I don’t believe that for a second – it must be an urban legend!” was their approximate response. It does seem rather unlikely – both the idea that you can grow citrus fruits in the freezing northern hemisphere climate; and the idea of hundreds of these fruit trees being placed on wheeled carts in their sturdy pots, wheeled out of the large-windowed building where they had overwintered, displayed in a garden, and then being wheeled back inside in the Autumn. But it’s true – you can Google it – and it means that a number of stately homes, palaces and parks have within their grounds a rather attractive Orangery building that may or may not be used for its original purpose these days. Given the slightly quirky idea behind having an orangery, it seemed fitting that I recently attended a seriously quirky dinner in the beautiful Holland Park Orangery in west London.

Our hosts for the evening were Marks & Spencer, purveyors of everything from socks to Christmas turkeys, and Sam Bompas of Bompas & Parr, the duo who first rose to fame making St Pauls cathedral out of jelly and has since branched out into all things zanily culinary. The challenge to the chefs for the evening (Robin Gill of The Dairy and Lee Westcott of The Typing Room) was to construct a 7 course menu where every single course was based around the flavours of that most beloved of Christmas fruit – the clementine. M&S source their clementines from grown in Valencia on family run farm Martinavarro and are hugely proud of their quality. The remainder of the food for the feast all had to be from the M&S range, as well as the accompanying wines. So the culinary gauntlet was thrown down – would our two intrepid chefs rise to the challenge?

The walk from Holland Park Tube was rather long but our spirits were instantly lifted when we arrived at the park entrance and were greeted by little rows of lanterns guiding our way through the dark and amongst the flower beds to the event. Pre-dinner drinks were in a gazebo outside the Orangery and consisted of a rather unusual cocktail (did I detect tequila??) which was clear when it was handed to you. But immediately afterwards, you were also handed a clementine “lollipop” – a transparently thin slick of clementine caramel wrapped around a twig (presumably a clementine twig?!) which you were encouraged to stir into your drink. As you stirred, it imparted the flavours of the lollipop to the drink and you ended up with something that tasted pleasantly like a clementint negroni. To snack on, we were served clementine cod brandade balls and some truly fabulous clementine-cured duck ham – rich and oily with the citrus tang of the clementine providing a fabulous foil for the rich meat. 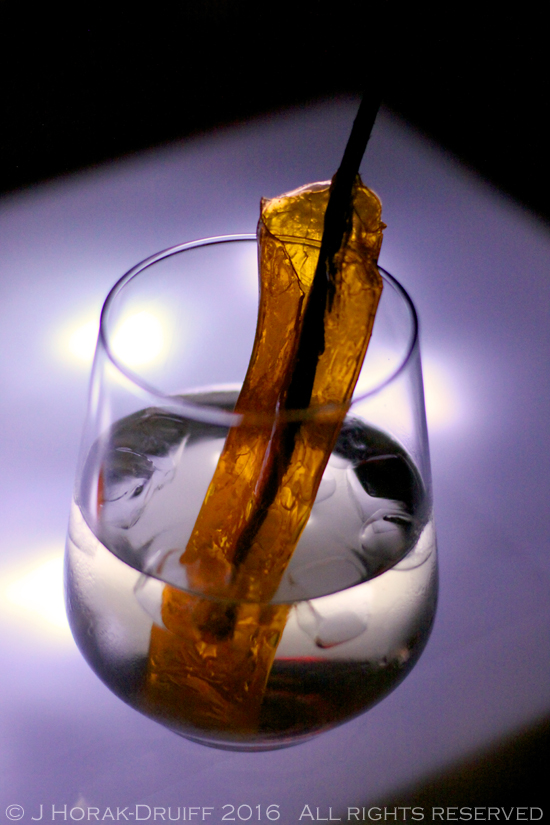 A dramatic sounding of a gong heralded our imminent move from the cocktail area to the dinner table and we were led through to a fairytaly scene in the orangery itself. The long table stretched almost the entire length of the space and was bedecked with candles, clementines, greenery… and some rather unusual little hammers (more on these later). Around the room were the citrus trees, already in their winter home, and festooned with what looked like little plastic teabags which we were all instructed to pick before sitting down. Their purpose became apparent as soon as the first course was served: posh crab noodles with “tea”. Alongside the bowl of crab noodles we were served one little glass teapot between two diners and were told to add our little teabags to the teapot and swirl. The more we swirled, the more it became apparent that these were no teabags, but little soluble plastic packets containing what I can only surmise were posh miso-rich gravy granules. The resulting liquid was like the best miso soup you’ve ever had, and we were instructed to pour this into our little bowls of crab. The final dish was quite sublime – generous quantities of shredded crab interspersed with little vermicelli noodles and fabulous crispy garlic (?) flakes, all swimming in the umami broth that we had made. I could have feasted on this all night! This dish was paired with a glass of  gorgeous 2015  Swartland “Cornelia” from South Africa. 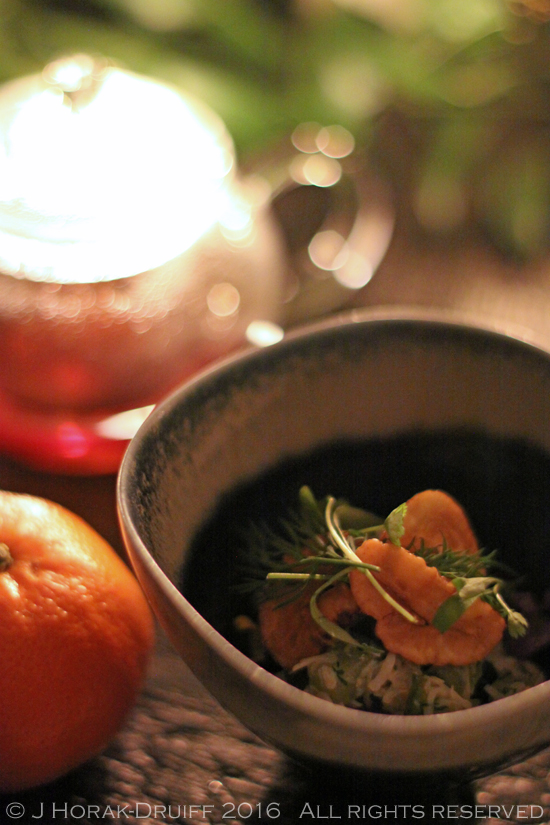 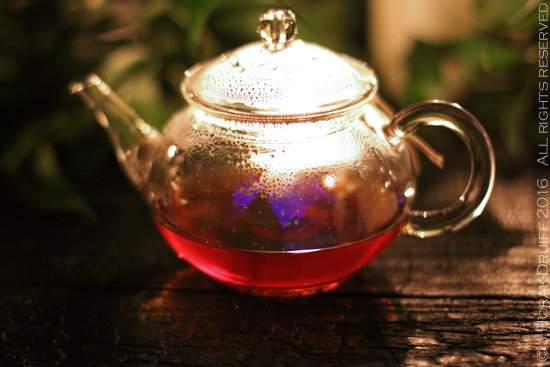 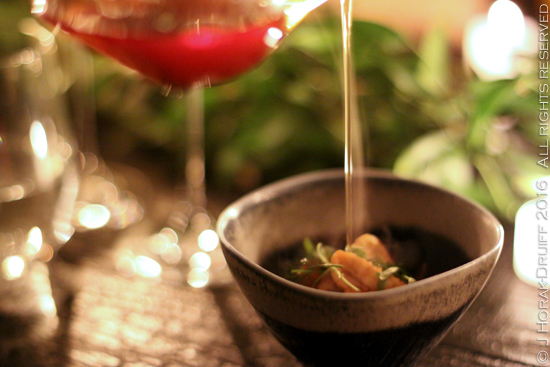 Our next course was one of my favourites: an amazing umami-rich fermented mushroom & clementine dip with a large wild mushroom brioche… shaped like (you guessed!) a mushroom. I loved this culinary visual pun, and the squishy brioche was the perfect tool for dipping into the dip and hurrying it along to my mouth.  This was paired with a 2010 Marksman English sparkling Blanc de Blanc which was a crisp foil for the rich dip and buttery brioche. 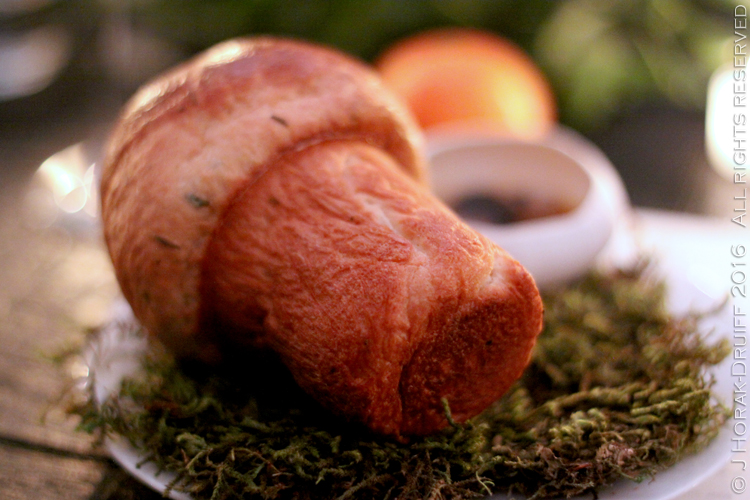 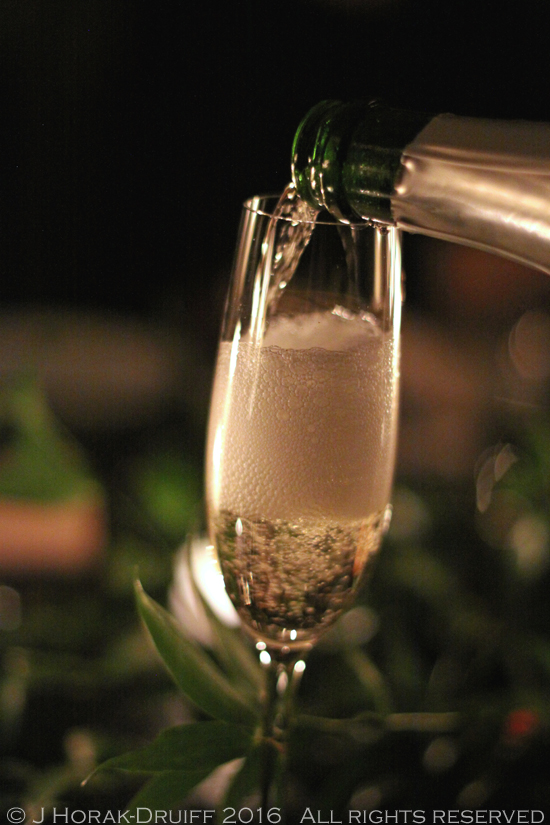 The next course sounded like all kinds of wrong on paper: fresh curd, clementine, kale crisps, pumpkin ribbons, pumpkin seeds and shards of what tasted like crispy rice cakes.  All the parts were served separately and we were given instructions to add all the ingredients to the curd and mix. What had looked like a disparate group of slightly odd ingredients turned out to complement each other perfectly.  The curd was savoury and contrasted nicely with the sweet clementine preserve and pumpkin ribbons, while the kale and seeds added crunch. The entire dish was a really lovely surprise and a standout in terms of novelty.  This was paired with another South African wine: the 2015 Paul Cluver Ferricrete Riesling which was aromatic and elegant. This was followed by a simple and classic dish: scallops cooked over juniper & clementine branches.  The scallops were fat, sweet and juicy with a good caramelised crust and a herbaceous hint of the branches over which they were cooked.  With this, there was a classic wine pairing: a 2013 Domaine Gadais Muscadet sur lie with good minerality to match the char on the scallops.  After this course we were given a small glass of Madeira to drink and we were mysteriously told to save the glass when we were done. The only meat course followed:  roast venison with salt-baked beetroot, cabbage and Madeira “tea”.  The “tea” consisted of an intense meaty broth that was poured into your glass once you had finished the Madeira, making an intriguing and delicious brew.  There was also a little basket of clementine steamed dumplings which were rather like mini faggots filled with slow-cooked venison and a hint of clementine. This was a fantastic course, with punchy venison flavour and buttery-soft perfectly pink meat alongside the rich little dumplings – another personal favourite. 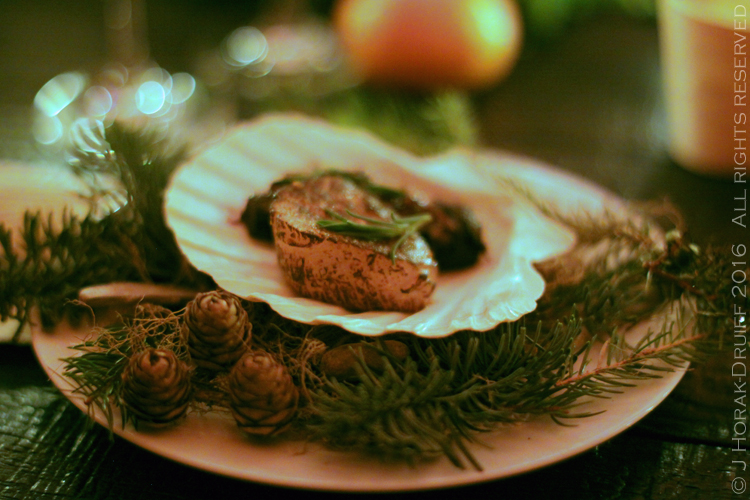 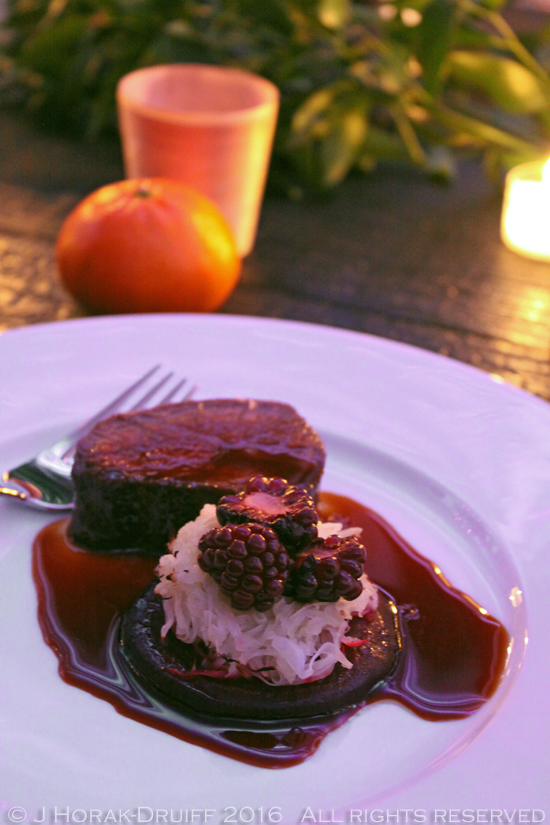 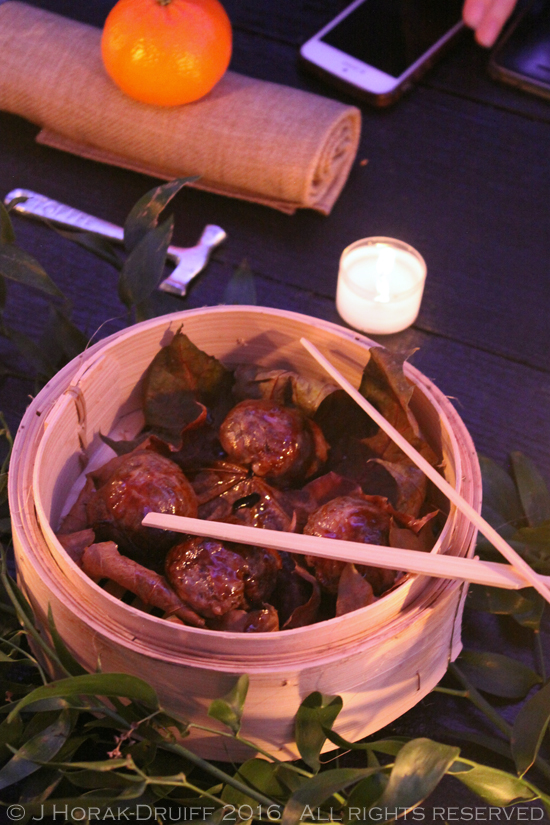 The dessert course was intriguingly titled “Smashing clementine” and was preceded by some endearingly silly tableside theatre where a chap at the opposite end of the table theatrically inflated a sugar balloon, much like a glassblower does, and we (rather ridiculously when seated 10m far down the table) had to don goggles and earplugs provided “for safety” in case it exploded.  The dessert that was then served consisted of an ice-cream that, according to the menu, incorporated the leaves and stalks of the clementines but to me it ended up tasting unpleasantly of citronella insect-repellent candles with all the herbaceous notes.  The shards of sherbetty clementine meringue on top which we had to smash with teensy hammers provided was very good, but overall this was my least favourite course.  I did enjoy the 2009 Hermit’s Hill botrytis Semillon 2009 that was served alongside it though!  And the final flourish consisted of star anise marshmallow cubes served on a piece of tree bark – these were good, if you liked star anise, but it can be a very polarizing flavour and was not everyone’s cup of tea.  This was paired with excellent Clementine mulled wine which definitely did seem to be everyone’s cup of tea! 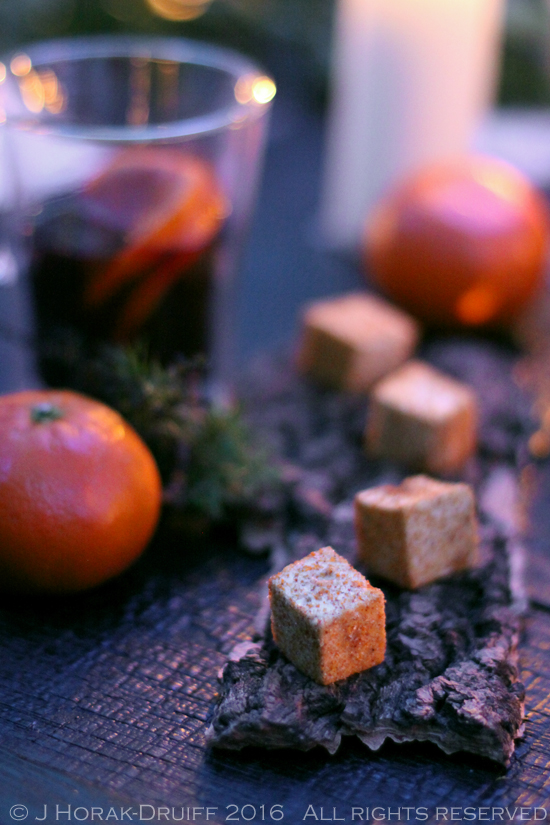 Throughout the evening, the colours of the ambient light as well  the music changed with each course to complete the immersive experience – a silly but ultimately fun idea (even though it played havoc with everyone’s photos!).  Having had potent cocktails beforehand and a matching wine with each course, everyone was fully on board when, to celebrate the end of the meal we were asked to stand on our chairs, place one foot on the table and make a toast to the chefs.  Why don’t all meals finish like this, in such gorgeous surroundings and replete with such good food? This was not just any old immersive dinner experience – this was an immersive M&S clementine dinner experience 😉 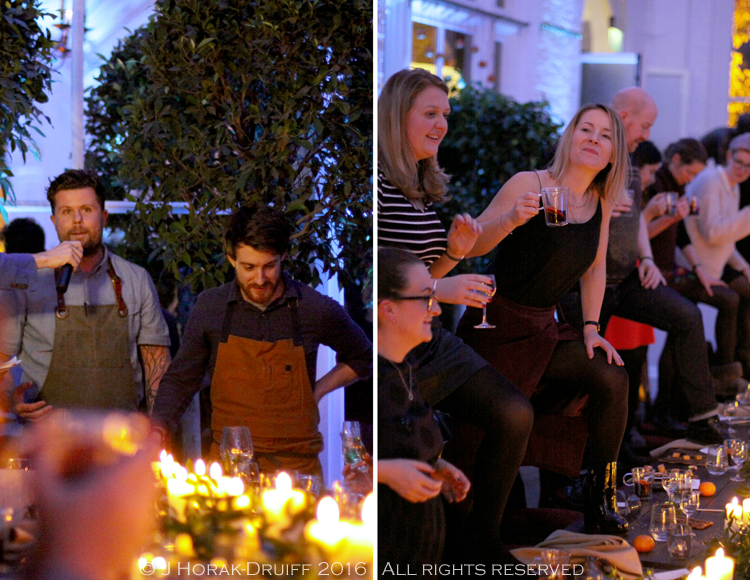 DISCLOSURE:  I enjoyed this meal as a guest of M&S but received no further remuneration to write this post.  I was not expected to write a positive review – all views are my own and I retain full editorial control.