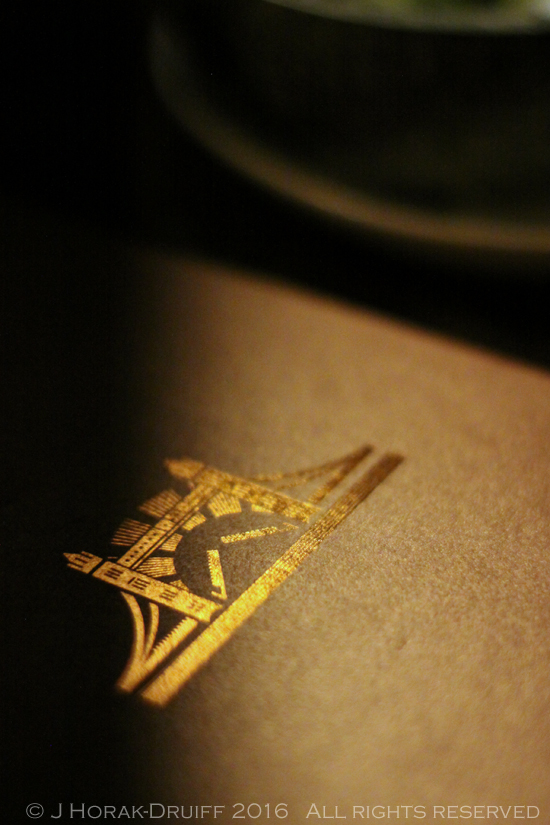 In my previous post, I spoke about the power of habit, about how we repeat certain behaviours over and over without even noticing that we are doing it, and before we know it, a habit is formed. But sometimes, just as inconspicuously, we can slip out of a long-held habit and later have no recollection of why we stopped doing whatever it was that we habitually did.  Back when I was at my previous job, I had two lovely colleagues with whom I loved going to dinner.  All three of us had Champagne tastes and lemonade budgets and so we became quite creative in ferreting out London’s best value dinner deals. But when we discovered Le Pont de la Tour’s fantastically well-priced set dinner menu and million dollar view, we knew we had found our spiritual home and proceeded to patronise the restaurant regularly.  But despite remaining friends with said colleagues, life moved on and for some reason we stopped our regular visits to Le Pont de la Tour.  In fact, when I visited towards the end of last year, I had not been there for five or more years.

Le Pont de la Tour opened in 1991 as the jewel in the crown of Terence Conran’s regeneration project of an 1870s Shad Thames warehouse complex, literally in the shadow of Tower Bridge.   The location is glorious, encompassing a surprisingly long chunk of the warehouse’s ground floor, sandwiched neatly between the cobbled Shad Thames and the River Thames and a heart-stopping view of Tower Bridge. The restaurant closed its doors for 2 months in 2015 for a major refurbishment by Russell Sage Studios (of The Balcon, Bread Street Kitchen and Dishoom fame) and regulars will not be disappointed. The area has been divided into a buzzy bar/brasserie area with dark, elegant leather banquettes, low lighting and lots of shiny brass; and a more subdued dining room which takes its inspiration from the iconic SS Normandie ocean liner of the 1930s. This means dark wood, intricate carving, mirror; brassy table lamps; white napery and polished silverware – a throwback to a more genteel Francophile age. With the refurb comes a new chef in the shape of Chef Frederick Forster, one of only four chefs to have won both the Roux Scholarship and the National Chef of the Year (2012). He has worked at Le Manoir aux Quat’Saisons, Aubergine, Le Gavroche and the Ritz, as well as the three-Michelin-starred La Côte d’Or under the late Bernard Loiseau, the Sandy Lane hotel in Barbados, and Le Royal Mirage hotel in Dubai. While remaining true to the high end French luxury menu tradition of the venue, he has also injected a new lightness and vibrancy into the dishes, particularly on the pared down bar menu. 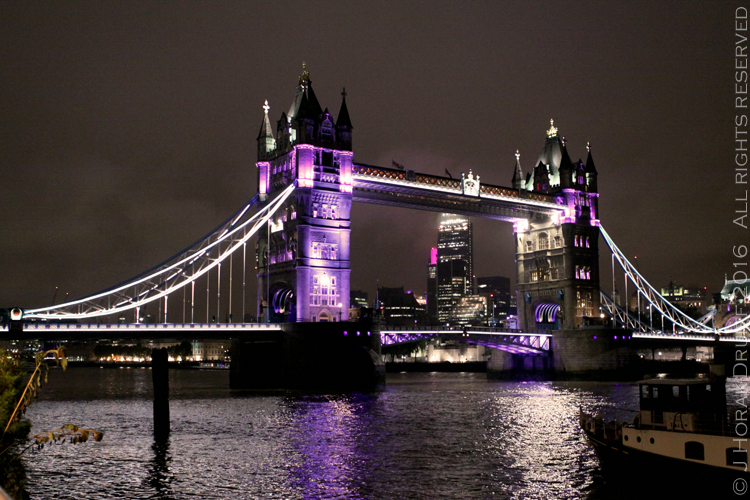 And it was in the bar/brasserie are that we sat when we went for dinner late last year. We started off perched at the bar where there is a good selection of cocktails available. I mentioned I liked negronis and the barman said he would whip me up something special, which turned out to be his super-aromatic take on a negroni, complete with a sprig of smouldering thyme as a swizzle stick – fabulous. My friend Inge had a French Riviera made of vodka, fresh lemon and basil leaves muddled with gomme syrup in highball,  topped up with crushed ice and Champagne (£11.50 each).  The cocktails were delicious as well as inventive and were accompanied by some excellent feather-light cheese and paprika gougères. 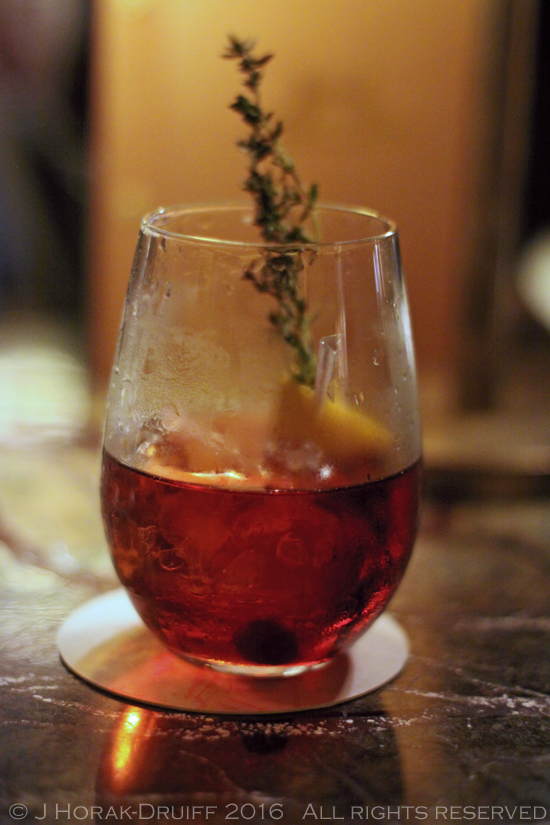 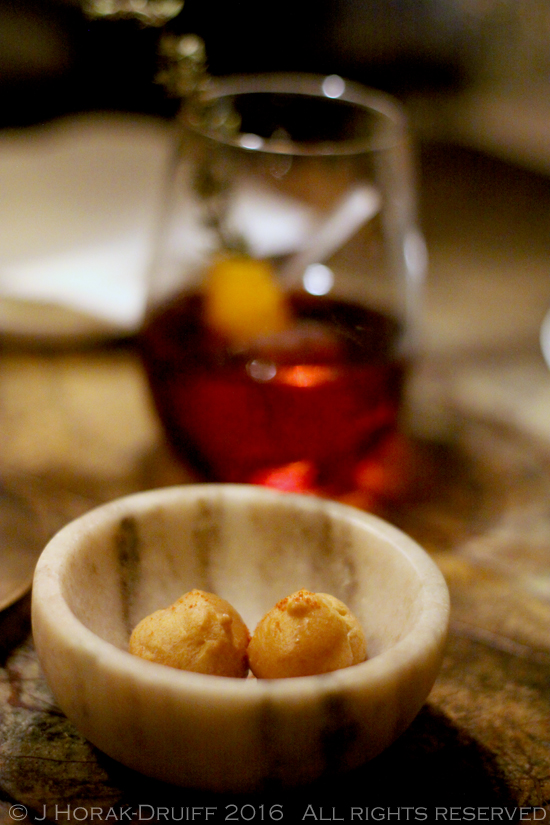 From the bar we were shown to our table by our very charming and very French waiter.  If you want unobtrusive service, this is probably not the restaurant for you – the waiters are chatty; ooze Gallic charm; and check on your level of satisfaction on multiple occasions during the meal.  I wasn’t particularly bothered, but I know that some might find it unnecessarily intrusive.  The bar menu is more compact than the main restaurant menu and comprises about 8 choices for each course as well as a separate section for grills. I started with marinated tomato with goat’s cheese and radish (£6.50) while Inge started with marinated octopus with flat parsley, saffron, potato and olives (£10.00).  The tomatoes were wonderful – various colours of cherry tomatoes served alongside little goat’s cheese croquettes and topped with wafer-thin radish slices.  Inge’s squid was plump and tender and I loved the tang of the olives and endive leaves with it.  Our only negative was that the oxalis leaves used to garnish both dishes were far too woody and should have had more of their stems trimmed – but they did make a pretty garnish. 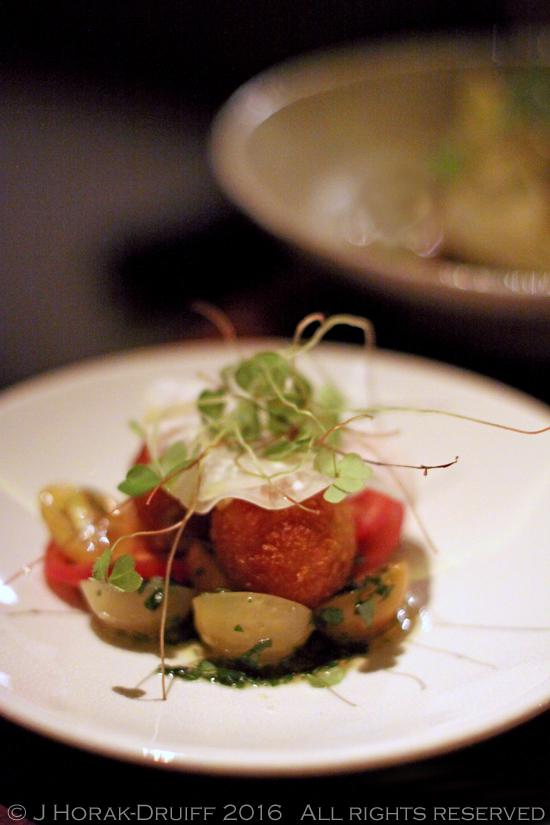 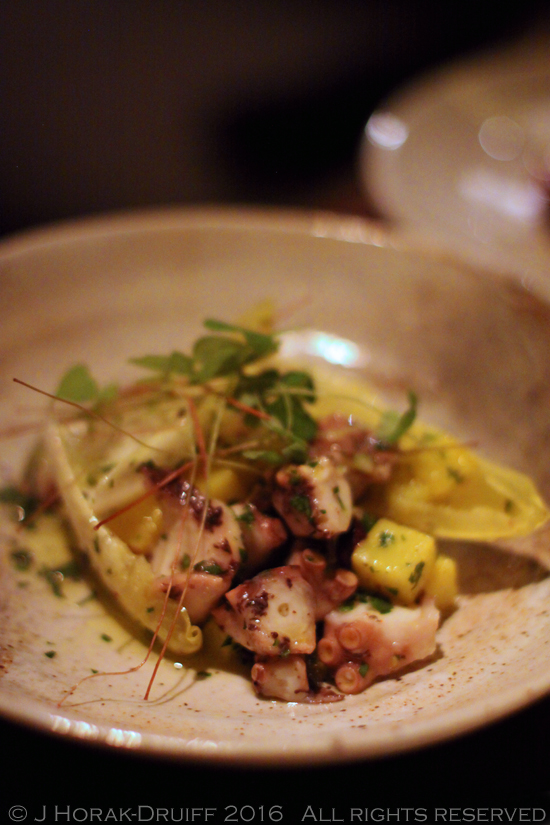 When our charming waiter came to take our order, we were still dithering over which mains to order so we asked what he suggested for us – and he had the good taste to choose the côte de boeuf for two (£23.50 pp).  This delectable hunk of 800g of 42 day dry-aged Aberdeen Angus beef was served on the bone and cooked on the rare side of medium rare as requested.  It is brought to the table whole and then carved before your eyes to reveal the perfectly pink and succulent interior surrounded by a caramelised layer or char.  The meat was exceptional:  pink but not bloody; sufficiently marbled; and full of flavour as only beef rib can be. We decided to forego any sauce so as to appreciate the meat, and we enjoyed our simple sides of sautéed spinach and French fries (£3.50 each). 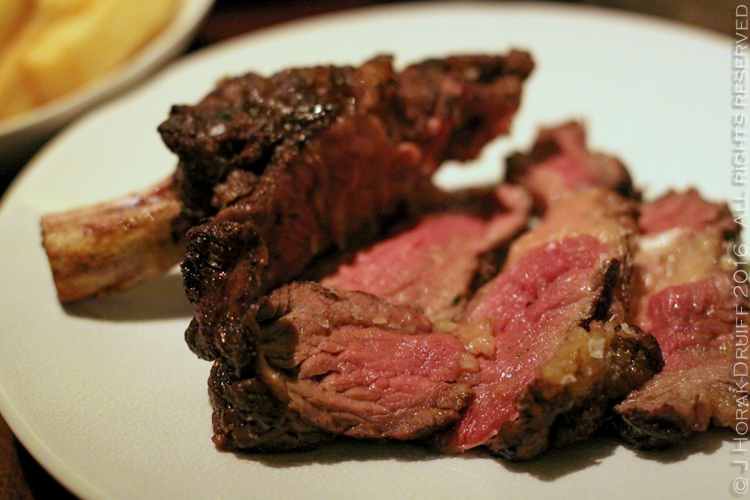 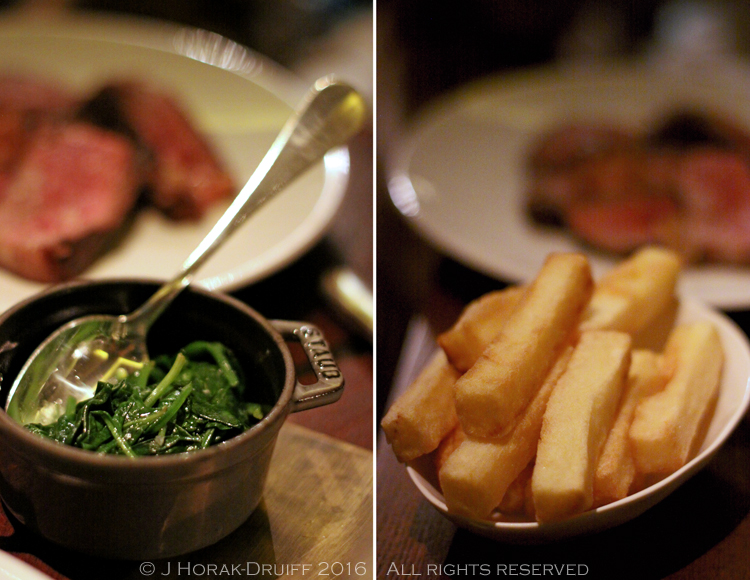 For dessert, Inge had the meringue with pineapple and vanilla ice-cream (£5.00) while I chose the selection of Artisan french cheeses (£9.50).  Inge’s meringue was of the soft variety rather than being crispy and we loved the shape that seemed to hold the macerated pineapple like a cornucopia. My cheeses were a delight and included: Saint Maure de Touraine (soft goat’s milk cheese with an ash rind from the Loire region); 36-month aged Comté (hard cow’s milk cheese from southeastern France); Salers (semi-hard cow’s milk cheese from the Auvergne region); Brun de noix (semi-hard unpasteurised cow’s milk cheese with a rind washed in  walnut liqueur – fabulous); and Camembert Calvados (semi-soft cow’s milk cheese that has the rind scraped off lightly and is then dunked in Calvados apple brandy for 3-5 hours before being coated in breadcrumbs – my favourite!). 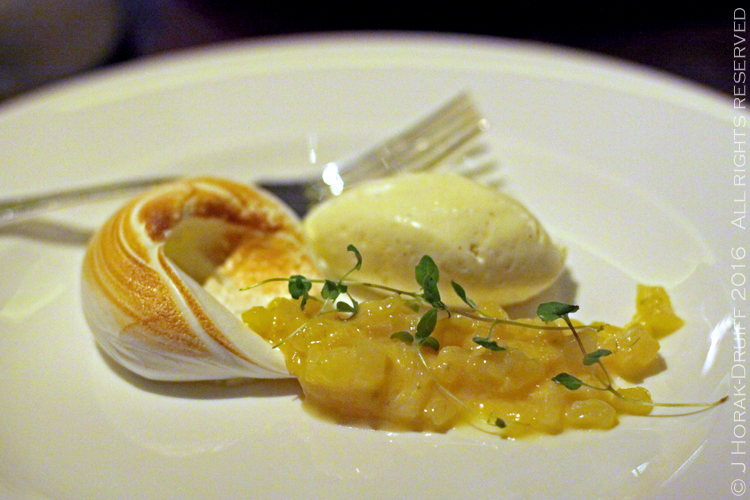 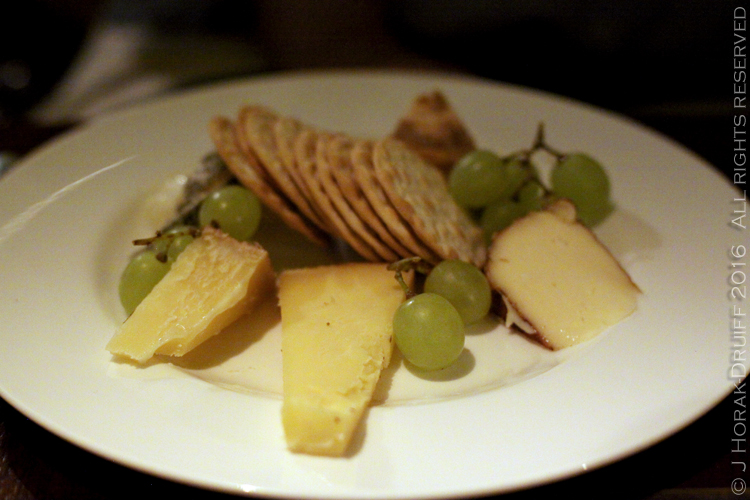 Together with a shared bottle of wine, our meal would have cost a very reasonable £35 each, given that show-stopping view – but there are even better deals to be had.  The bar & grill offers a three-course weekend brunch for £20 (add £15 for bottomless prosecco, and there is live music) or their limited choice weekday lunch/dinner for £15.00 for two courses, or £20.00 for three.  The food was very good, the atmosphere buzzy even on a chilly weeknight, and the view of Tower Bridge as you leave makes you feel like you are on a movie set. It’s a spectacular place to take visitors to the capital, and a surprisingly cost-effective venue for a relaxed dinner with friends.  But beware – it may be habit-forming!

DISCLOSURE:  I enjoyed this meal as a guest of Le Pont de la Tour but received no further remuneration to write this post.  I was not expected to write a positive review – all views are my own and I retain full editorial control.