You are here: Home / Recipes / Gluten-free / Tartiflette – an Alpine treat 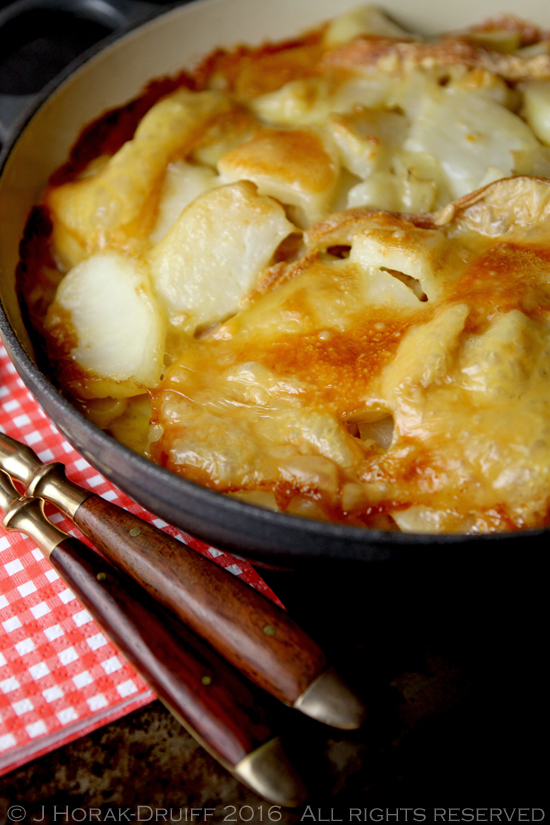 I have kept a journal in some form or another since I was about ten.  I have no idea why I started, but when my father brought home a tiny pocket diary for me from one of the medical reps that had visited his office, something in my brain clicked and I started writing down what I had done each day.  Some days are just a scribbled “TGIF!!!” and the end of the school week, while others contain minute detail. I continued with this until well into my twenties, before the digital age overtook me and I started typing memories instead of writing them, and in the final few years, I took to opening each new journal with a quote from a song or poem, to epitomise how I wanted that year to turn out.  Going through some boxes and old journals last week, I was surprised to find that I had opened my 2001 diary with the quote “Life doesn’t frighten me at all” by Maya Angelou.

Because, truth be told, almost everything frightens me! I blame my parents for coming up with an endless list of Things That Are Very Dangerous and instilling in me a fear of everything from plane crashes to horses to riding a bicycle (I kid you not!).  Add to that the fears that life experience imposes on most adults (you know, financial destitution, dread diseases, terrorist attacks…) and you could say that much of my life has been one of risk-averse behaviour. So nobody was more surprised than I when, in my thirties, I took up skiing. For a start, I can categorically say that your thirties are not an ideal time to take up a sport that requires extra travel insurance because of its risk of injury. Three-year-olds will barrel down a hill with no fear at all, because they have no idea what havoc a fractured skull or even collarbone might wreak upon their life. Thirtysomethings, however, have a pretty accurate idea.  On my first day at beginner’s ski school in Andorra, I wept with terror and told the instructor I was there under duress (but I was back the next day, and the day after that).  Four consecutive seasons of beginner’s classes later, I was cautiously skiing red runs and the year after that, even the odd black run.  I was officially hooked and looking forward to many years of snowy joy. And then in February 2014, a sneaky ski weekend ended on a blue slope by the chair lifts with a broken femur, a skidoo evacuation to a first-aid centre, a shot of ketamine, a helicopter ride to hospital, surgery to fix my femur with a titanium rod, and three months on crutches. Unsurprisingly, I solemnly declared to everyone that I know that I was done with skiing for good. 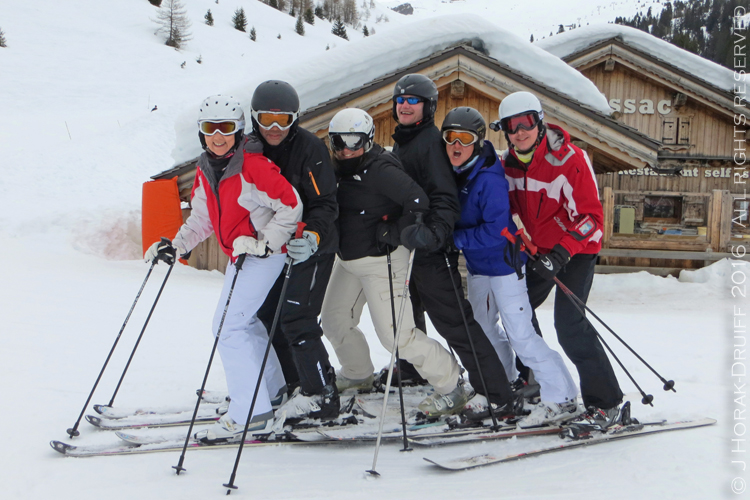 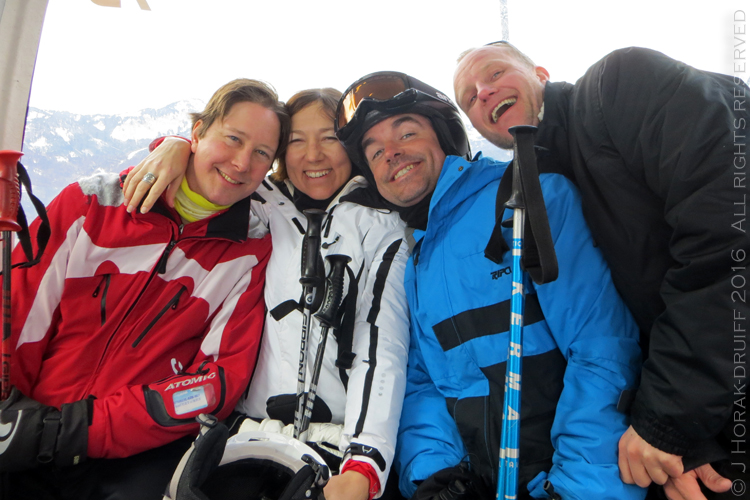 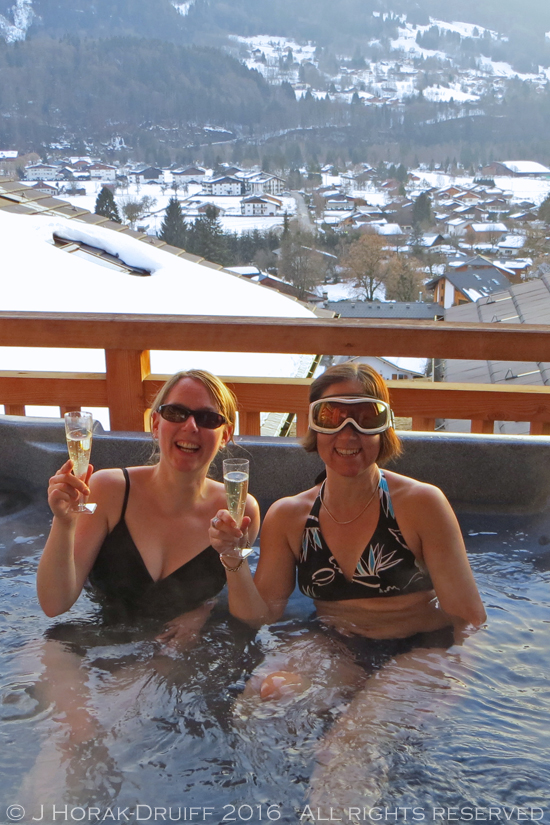 But… oh, how I missed it.  From my hospital bed in France after the surgery I tortured myself by watching the Sochi Winter Olympics obsessively.  As my leg healed, I would try to move my knees from side to side as you would in skiing while I brushed my teeth at night. And when we were in the Swiss Alps a year later, it took all the prudence and self-control I could muster not to hurl myself down a snowy slope on a pair of skis. I missed the thrill of that moment when you point your skis down a steep piste to start your run down.  I missed special camaraderie with good friends on (and off!) the slopes.  I missed the magical beauty of the mountains and trees covered in a pristine layer of fresh snow.  But most of all, I missed having an excuse to eat all the fabulous Alpine dishes.  Because, you see, one of the best reasons to ski is the massive amount of energy that you expend, thus necessitating huge calorie-laden meals to refuel. Once you have experienced the traditional Savoyarde food in the Alps, you will start to see the wisdom in this statement. Kick off your skis and stop in at any of the character-filled wooden chalet restaurants beside the pistes and you will find tartiflette on the menu, an utterly decadent potato bake including smoky bacon lardons, onions, cream and slices of Reblochon cheese.  So although I missed the thrill, the friends and the snowy mountains, i do believe it was the tartiflette that enticed me back onto skis and up the mountains last month, almost two years to the day after the accident. Yes, there were tears; and yes, there was much terror.  But I pointed my skis down and prayed that muscle memory would take over.  It did, I survived, and the taste of success was oh so sweet – but not as good as the taste of the tartiflette that awaited me at the bottom of the run. 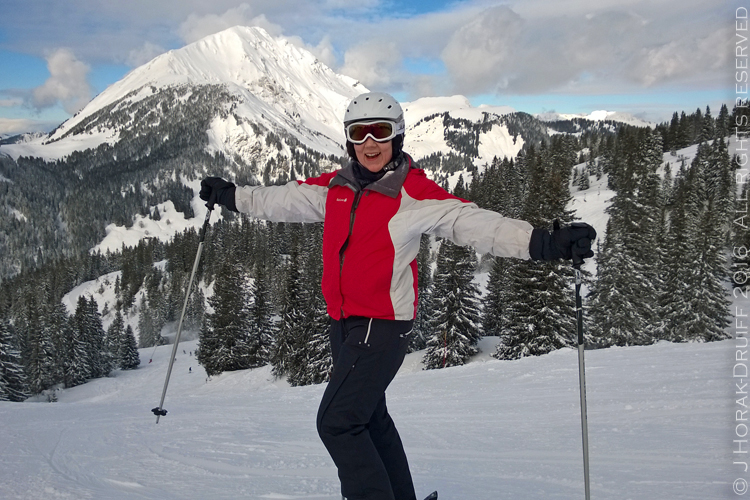 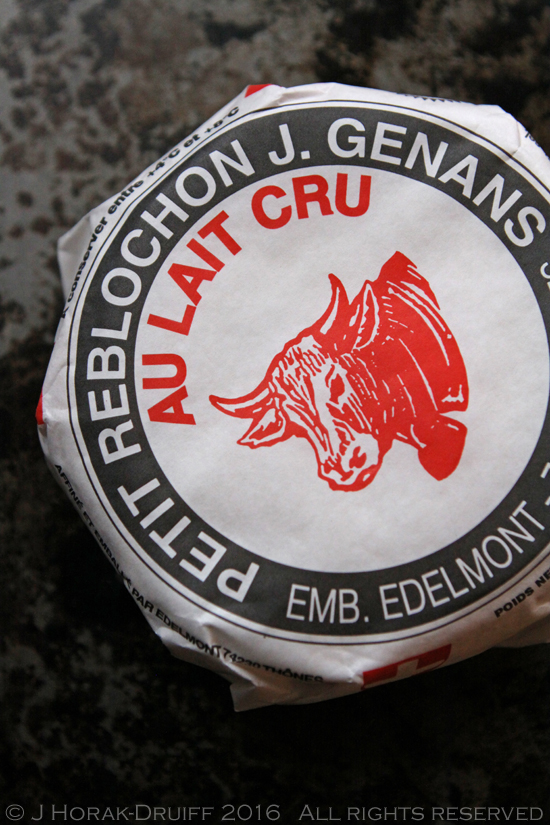 Of course, skiing is sadly not a year-round passtime, but cooking is, so whenever I feel in need of a little Alpine fix, I can recreate the Savoyard flavours of tartiflette at home.  Being a peasant dish, the flavours are pretty uncomplicated, but don’t be tempted to use anything except a Reblochon cheese, or at the very least another semi-hard Savoyard cheese.  If all else fails, use Port Salut or a young Fontina. Traditionally the dish is cooked in a shallow earthenware dish called a tartiflette, but it also worked perfectly well in my Le Creuset skillet. Bon appetit! 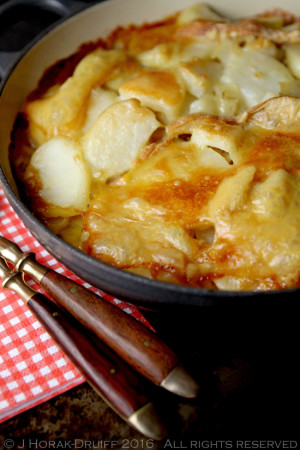 Print
Prep time
40 mins
Cook time
20 mins
Total time
1 hour
This luxurious Alpine version of a potato bake depends on perfect ingredients – so don’t skimp on the quality of the cheese! If you have not got Reblochon, use Port Salut or a young Fontina.
Author: Jeanne Horak-Druiff
Recipe type: Entree
Cuisine: French
Serves: 4
Ingredients
Instructions
Wordpress Recipe Plugin by EasyRecipe
3.5.3208