If there is anybody here who was reading my blog back in 2007, you may recall my post about my very happy birthday lunch at Raymond Blanc’s Le Manoir Aux Quat’ Saisons. At the time, I think I described it as feeling like a mini-break rather than a meal – but of course it also carried a price tag closer to a mini-break than a meal! It’s not the sort of thing most of us can afford to do every month – or even every year.  But a visit to a branch of Brasserie Blanc, the chain of less formal brasseries (started by the chef as Le Petit Blanc Brasserie in Oxford in 1996, rebranded as Brasserie Blanc in 2006, and expanded to London in 2010), is far more financially achievable. In fact, it’s one of my favourite venues for as weeknight dinner with friends, particularly for the excellent-value prix fixe menu that is always available. What you might not know is that Brasserie Blanc is one of the very few UK dining chains that regularly features game on the menu, and it was this that I was recently invited to sample at their Charlotte Street Branch in the heart of London’s theatreland.

Upon arrival at the restaurant, we were shown upstairs to The Clubhouse, one of their 2 spaces available for private rental (together with The Hideout on the second floor). After a glass of the custom Brasserie Blanc Blanc de Blancs Champagne and introductions, we sat down to hear from a few people involved in making game meat appear on the Brasserie Blanc menu.  First up was , starting with Tim Weston of the National Gamekeepers Organisation, a gamekeeper for one of the estates that supplies Brasserie Blanc with much of their game. Like most people, I had never actually thought about how game is reared or killed but Tim gave a fascinating and very amusing account of the process. “I became as gamekeeper because I read Lady Chatterly’s Lover at school”, he began. “I thought it would all be rolling about in the rhododendrons with the lady of the manor – but there is a lot more to it than that!”. He explained how the gamekeeper’s job is to ensure that enough game birds are bred in the Spring so that at the time that the hunting season commences in the Autumn, there is enough of a surplus to allow for shooting, as well as to leave some breeding stock for the following year. In addition, the game birds need to be kept on their owner’s estate (this is done with “dogging-in” – cue many sniggers of amusement!) and need to be fed their all-natural grain diet in particular areas at particular times so as to facilitate shoots later. It’s all rather labour intensive and sounds like quite an art. Next up we heard from Simon Smith of game merchants Aubrey Allen a game merchant who supplies Brasserie Blanc and who shared the depressing fact that 86% of UK game is exported; and finally we heard from chef Clive Fretwell, the group executive chef for Brasserie Blanc who also worked with Raymond Blanc at Le Manoir for a number of years. He chatted about how best to cook game and how it is less complicated than people tend to think, but he was also keenly aware that most people do not have the same sous vide equipment in their homes as he has access to in his kitchens, and which make it easy to avoid dried-out meat. To get around this, he demonstrated to us his pheasant-in-a-bag recipe: all you need for a fantastically moist pheasant is a roasting bag and some seasoning. Easy peasy! 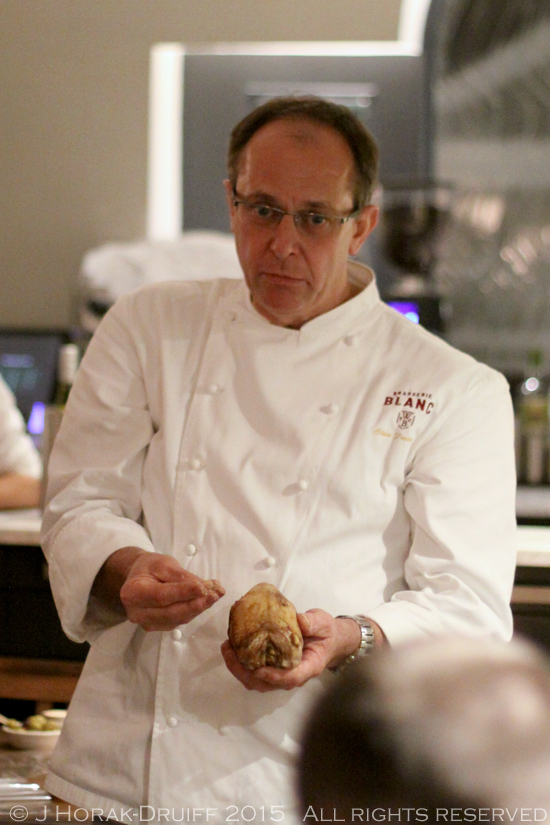 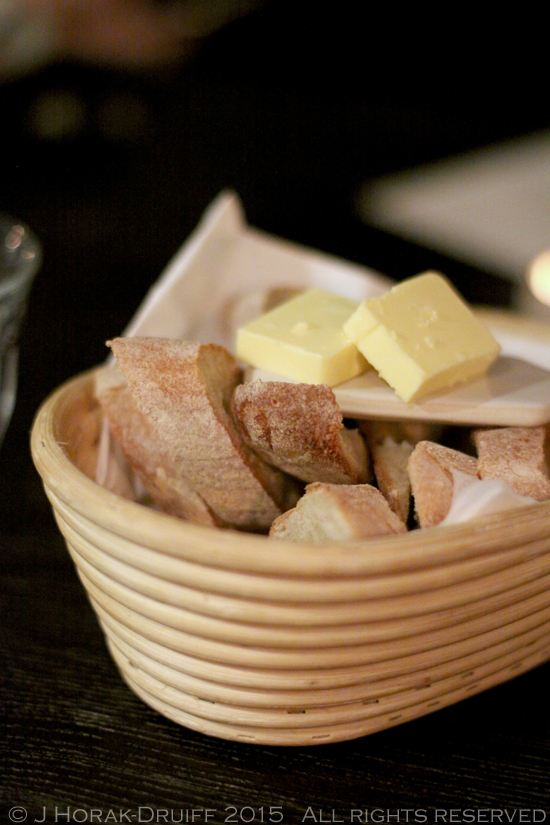 But the proof of the pudding, as they say, is in the eating and soon we were sampling some dishes from the Brasserie Blanc seasonal game menu. For starters, Nick and I shared two dishes: the wild wood pigeon salad with winter coleslaw; and the mallard duck pistachio & hazelnut terrine with braised quince and port jelly.  The duck was fabulous – seared and still delightfully rosé in the centre – and beautifully matched by the crunchy slaw which featured kale and apple, amongst other things. But I also loved the terrine – a good chunky texture as is correct with a terrine, laced with plentiful pistachios as well as a few toasted pistachios scattered amongst the cubes of moreish port jelly on the plate.  These dishes were paired with some Limoux Sauvignon Blanc from Domaine Begude, am organic wine with a zesty, fresh grassy flavour to balance the rich game flavours. 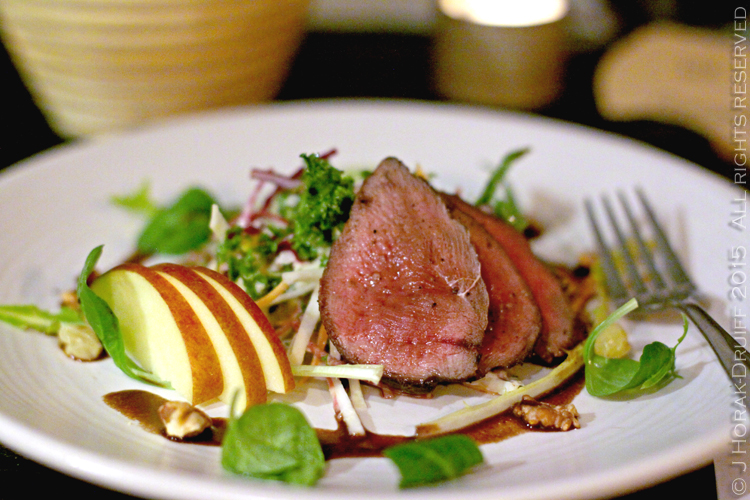 For mains we shared another two dishes: eighteen hour venison casserole (slow-braised wild Scottish venison, Autumn  vegetables, creamy mashed potato); and roast pheasant in a bag with potato rosti, pumpkin and braised blackcurrants. These were matched with a Minervois Syrah from  Chateau Maris – another organic wine with a lush palate of succulent dark plums and blackberries and spicy notes of black pepper and aromatic herbs.  I would have been hard-pressed to chose my favourite among the two main course dishes – both were wonderful.  The venison stew had a good, rich depth of flavour that results from slow cooking and the meat was form tender.  The pheasant was fantastic, rubbed with Brasserie Blanc’s Chinese five-spice style dry rub before cooking which worked very well with the gamey  meat and the sweetness of the pumpkin and blackberries. Dessert consisted of an assiette of chocolate, featuring a miniature chocolate cake; chocolate ice cream; a chocolate marquise; and an outstanding pistachio madeleine – like a greatest hits dessert plate! 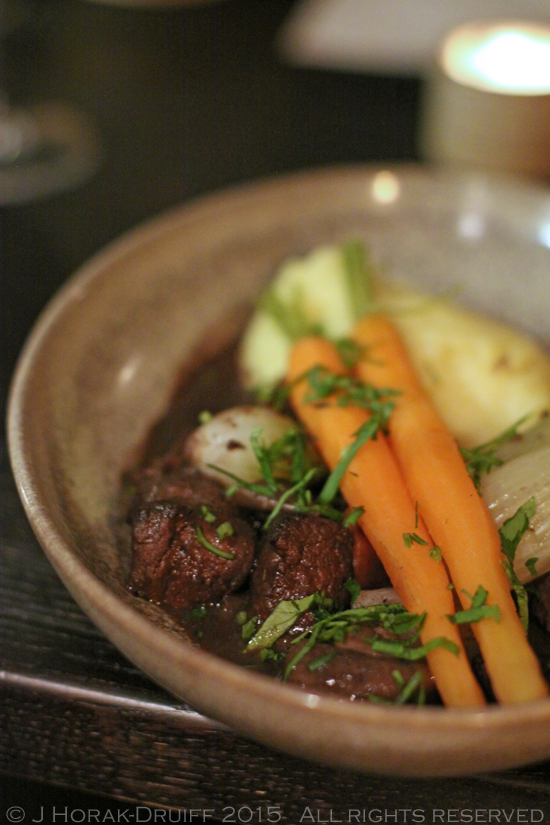 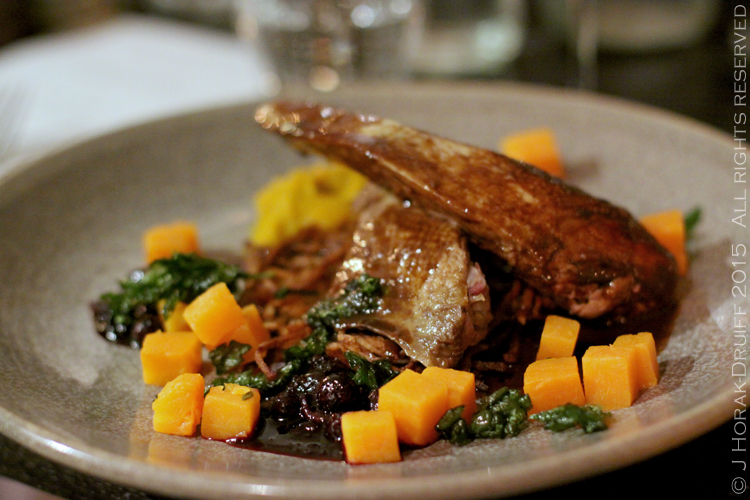 As I said previously, I have always enjoyed my visits to Brasserie Blanc and this dinner was no exception.  It can sometimes be hard in London to find a restaurant that does not cost exorbitant amounts of money but that consistently produces well-executed and delicious food – but Brasserie Blanc is certainly one such a place. Starters range in price from about £6-9 and mains from about £14-22.  There is also a daily Prix fixe menu: lunch Monday to Saturday until 18h30 costs £9.95 for 2 or £12.45 for 3 courses; and dinner Sunday to Thursday after 18h30 costs £14.45 for 2 or £16.95 for 3 courses. It’s hard to beat great food, friendly service and consistent quality at those prices – and I challenge you to find more reasonably priced game on any other menu in London.

DISCLOSURE:  I enjoyed this meal as a guest of Brasserie Blanc but received no further remuneration to write this post.  I was not expected to write a positive review – all views are my own and I retain full editorial control.