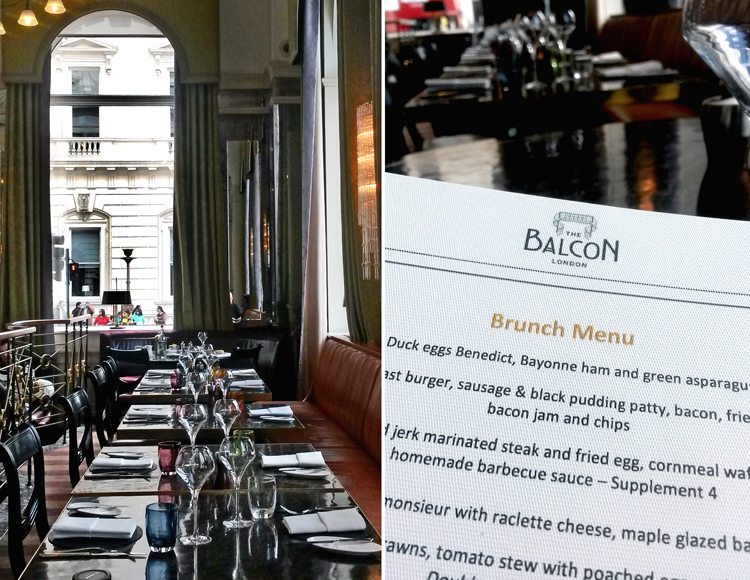 Do you ever look at other people’s Facebook feeds and feel just a little bit as if you are underachieving in your own life? That your kids aren’t as adorable; your house not as perfect; your pets not as quirky or amusing; your holidays not as exotic; and your life just lacking in good old-fashioned decadence? Don’t worry – I’m not going to tell you that the solution is to go cold turkey and cancel your Facebook account or stop spending so much time on Pinterest.  There is a far simpler way to add some decadence to your life: go out for brunch. There is just something about having brunch that is subtly more decadent than other meals. Breakfast, lunch and dinner are all practical, necessary meals, breaking the day into two halves and providing sustenance at the end of the working day.  But brunch – now that’s another story. Brunch says “I have nowhere else to be – I can eat from the morning into the afternoon and no boss is going to fire me”. Brunch lets you have a cappuccino and a cocktail in the same meal and even the Italians would not object. Brunch can take up three hours and still leave you time for a stroll in the park. cocktails and dinner. What’s not to like?

So I was understandably thrilled when one of my favourite London restaurants The Balcon (now Wild Honey) recently launched Le Brunch, their take on the most decadent meal of the week. Situated in the Sofitel St James hotel (a grand former bank and now one of central London’s best kept hotel secrets if you ask me!), The Balcon is a glorious high-ceilinged room decorated in subtle colours with and golds highlights with huge windows overlooking Waterloo Place. Every time I have been there, the staff have been faultless, treating all customers like regulars, and this occasion was no exception.  My companion Andrew and I were seated in one of the tables by the window on a gorgeous curved aubergine leather banquette and were immediately offered a kir from their selection of five, made with house-made infusions and a choice of either Viognier or Champagne to top up the base flavouring.  Andrew chose the rhubarb liqueur with honey and vanilla; while I went for the crème de peche, pepper and ginger infusion (£10,00 each) – both were delicious, although I would have liked mine a little more gingery. 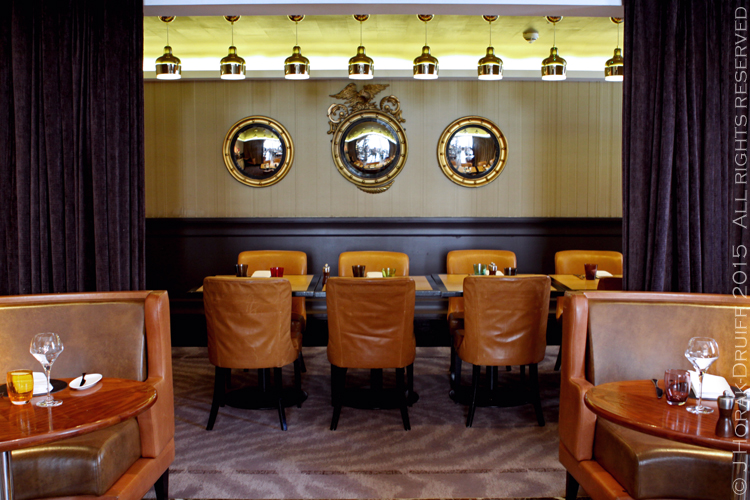 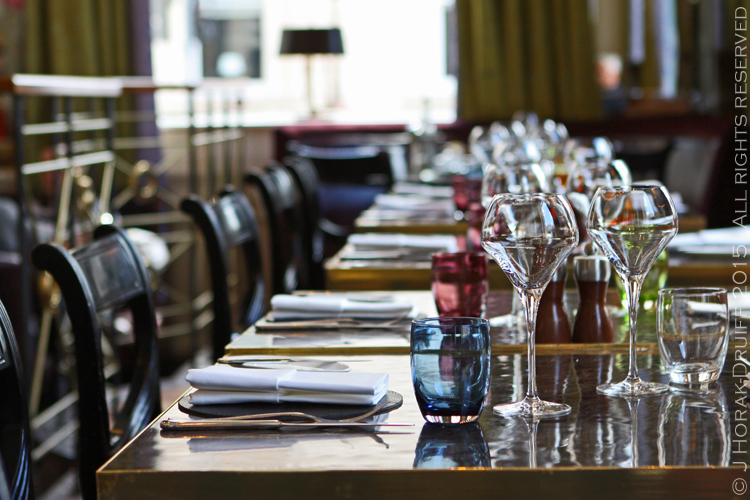 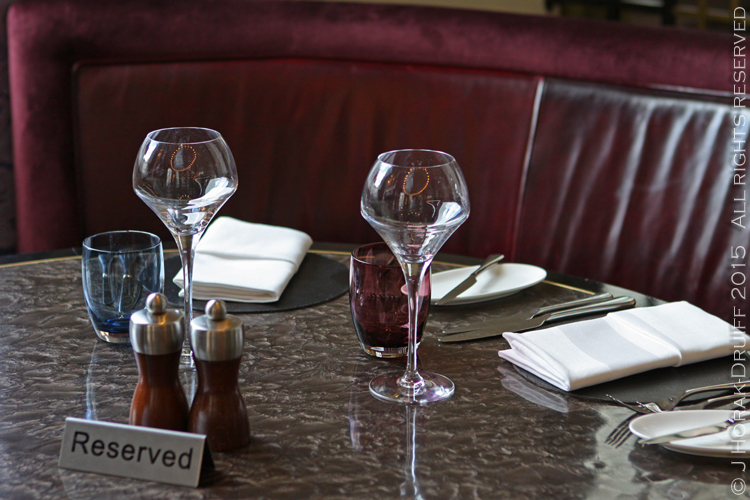 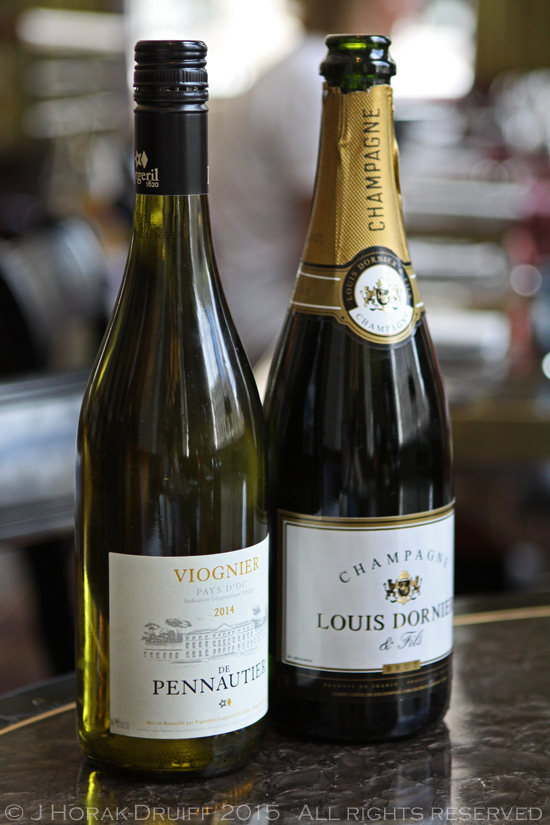 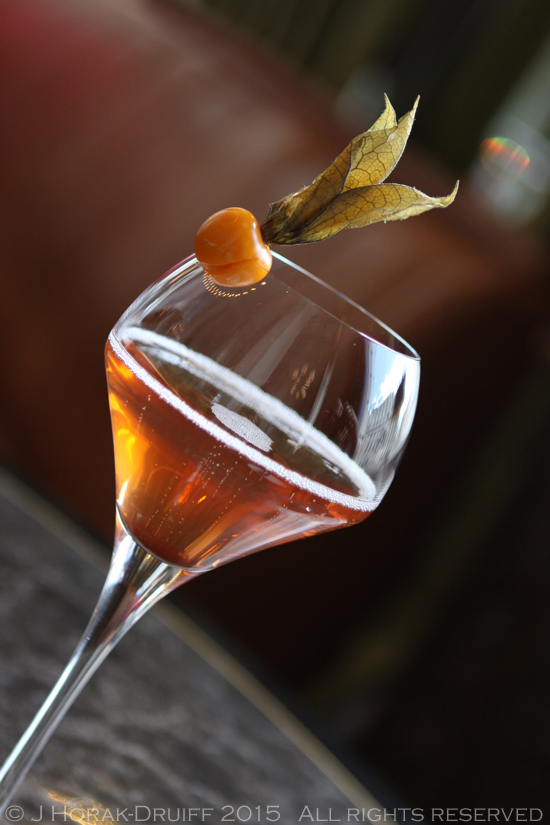 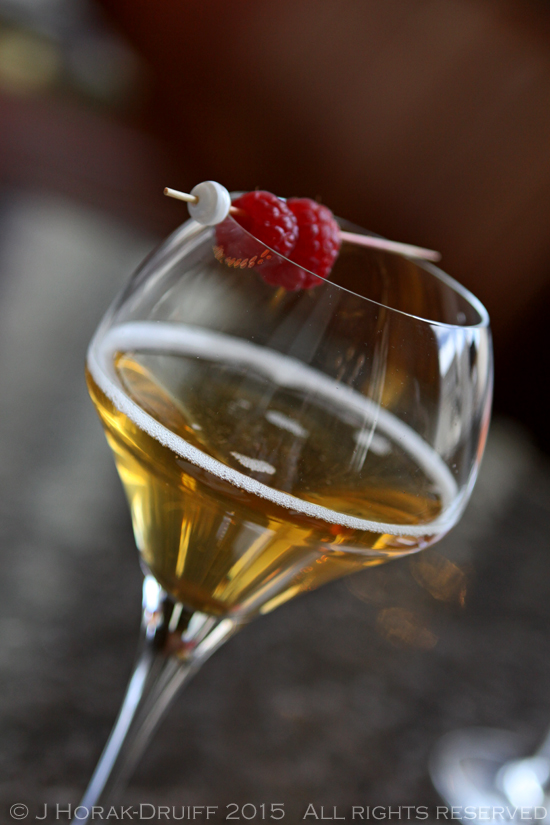 While sipping our kirs, we were also brought some bread – although to call this bread would be a misnomer as both were more like the savoury cakes that the French do so well.  Both came in wedges, like a cake rather than a bread and mine was shot through with veins of richly flavoured blck olive tapenade and topped with cheese, while Andrew’s contained nuggets of ham and cheese.  Both were soft, pillowy and ridiculously good. The small but perfectly formed brunch menu contained many temptations, including a pancake stack with lemon, blueberries and maple syrup; as well as a croque monsieur with raclette cheese and maple-glazed bacon.  In the end, Andrew could not resist the breakfast burger consisting of a sausage and black pudding patty, a couple of slices of bacon and a fried egg topped off with bacon jam plus a mini fryer of chips on the side. The burger was impressively large and Andrew professed it to be equally delicious and bonus points were scored for the collection of miniature condiment bottles that came with the burger. I, on the other hand managed to resist the temptation of raclette croque monsieur and chose the duck eggs Benedict with Bayonne ham and green asparagus. I loved this twist on the original for the added umami of the excellent Bayonne ham; the green crunch of the asparagus and the outstanding hollandaise sauce.  The duck eggs themselves were runny-yolked perfection – an altogether excellent dish. 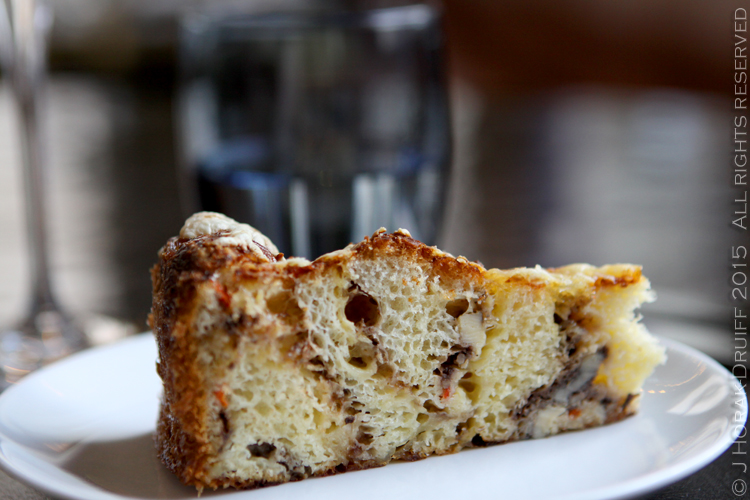 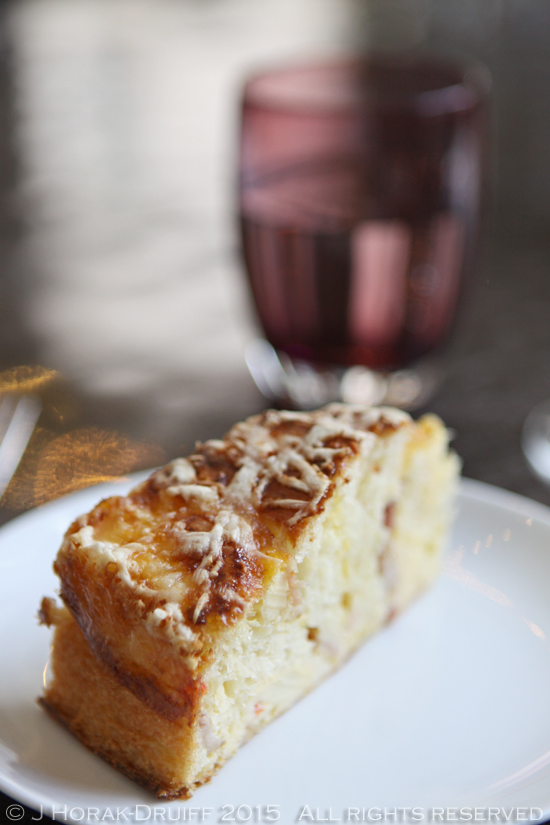 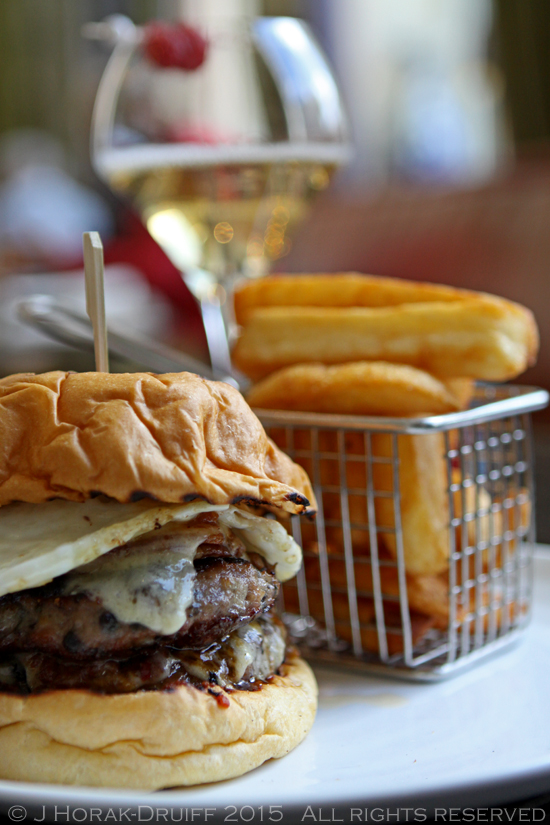 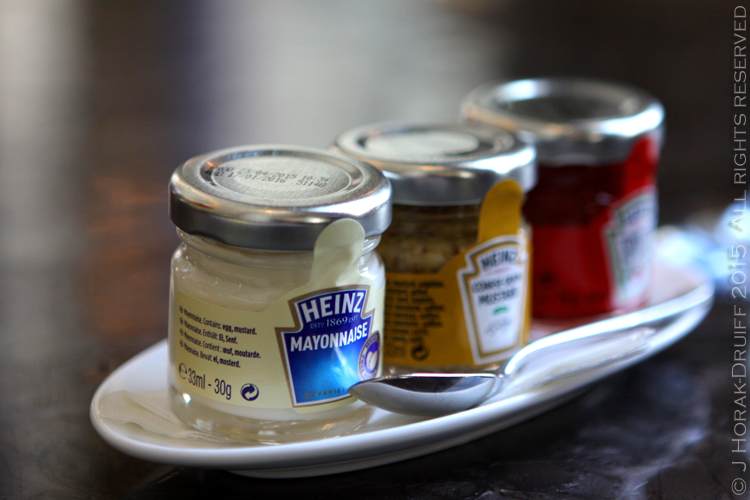 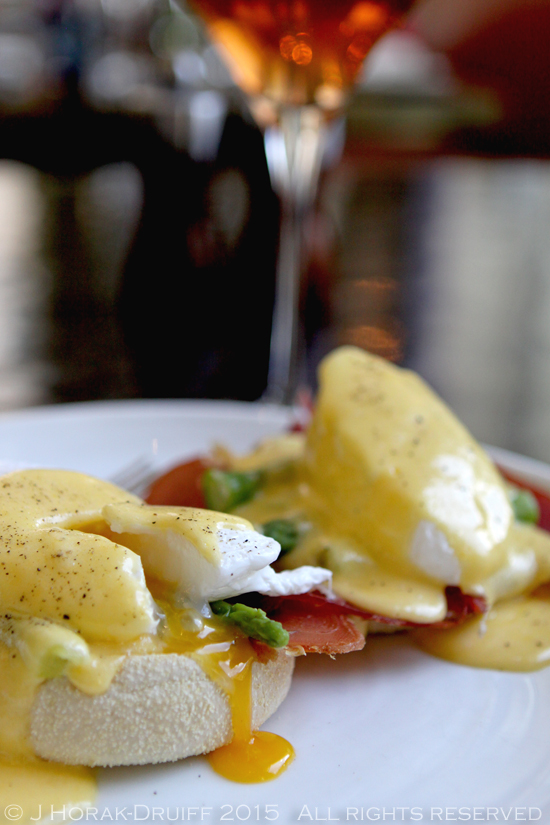 As our kirs were finished, the waiter enquired whether we’d like to try something from the alcoholic milkshake (!) menu, to ease us into dessert – obviously a rhetorical question! Andrew was swayed by the presence of gin and chose an alcoholic milkshake composed of gin, St. Germain elderflower liqueur, strawberry ice-cream and cranberry juice (£8,00).  It arrived pretty as a picture – a pale pink confection garnished with raspberries and an edible flower – but contained enough of a kick that you knew it was for grown-ups only. I tried the Black Russian which is made with dark rum, Mozart chocolate liqueur, chocolate ice cream and milk (£8,00) which was deliciously chocolatey and garnished with two-tone chocolate curls.  Both were definitely worth every penny and were attractively served in lovely cut glass whisky tumblers. 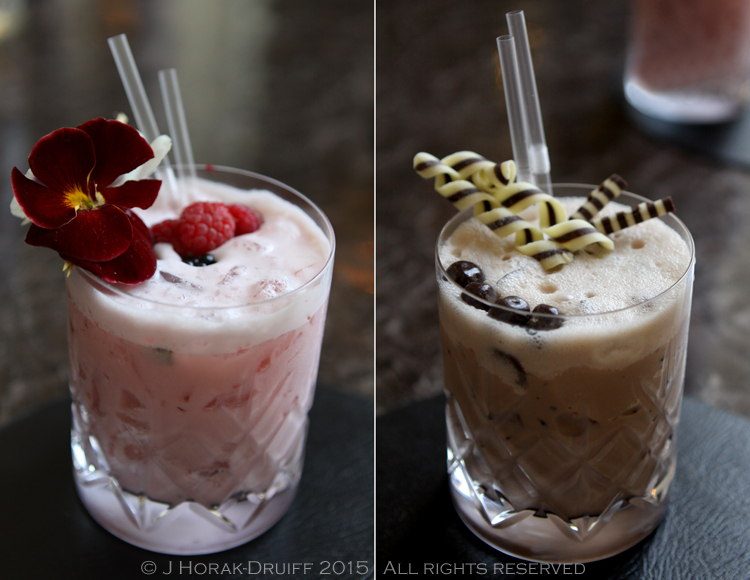 And so to that other essential element of brunch: dessert! Having already eyed up the dessert menu when we sat down (I can’t be the only one who does that. right??), I pretty much knew what I was going to have:  the warm chocolate and ginger tart with milk ice-cream. This was one of the nicest sweet dishes I have had in a while – a featherlight and crumbly pastry case filled with a gingery chocolate fondant that was cake-like on the outside but revealed an irresistibly liquid centre when you broke it open.  I also loved that the ginger was pronounced enough to balance the sweetness of the chocolate, and that the ice-cream was subtly flavoured but deliciously rich and creamy. After some debate, Andrew chose the butterscotch spiral coffee cake, which was deliciously butterscotch scented and with a light and fluffy texture.  Let’s just say neither of us had menu envy as both dishes were so good.  We finished with coffee served with deliciously French Gavotte crispy crepe biscuits. And when we finally walked out after three hours, we also managed to get a look at the kir “buffet” where all the base flavourings for the kirs are prettily displayed alongside the restaurant’s selection of craft beers. 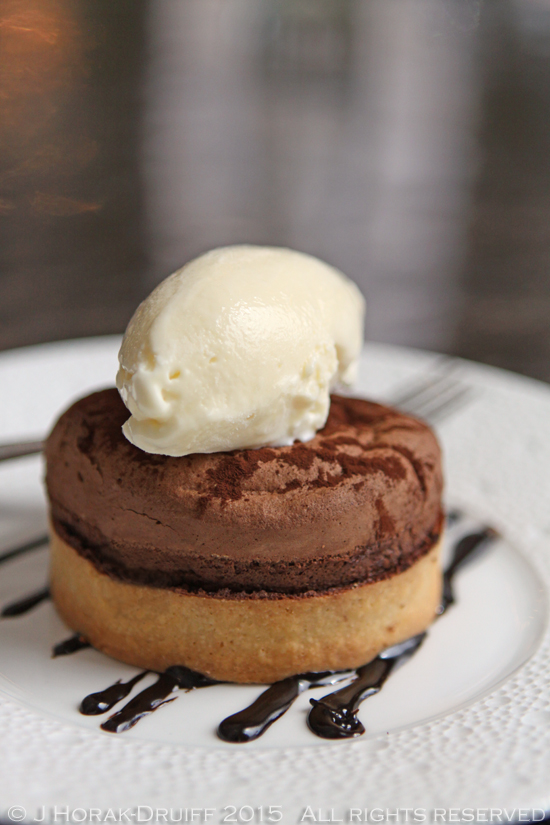 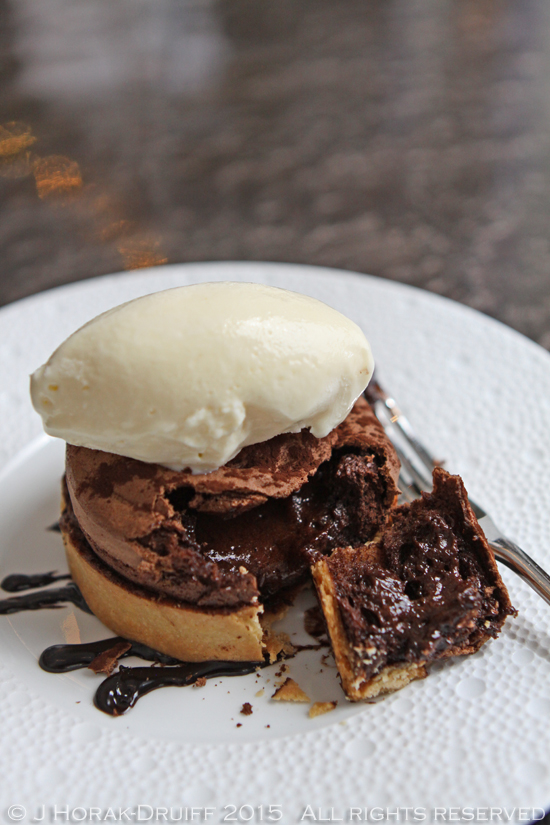 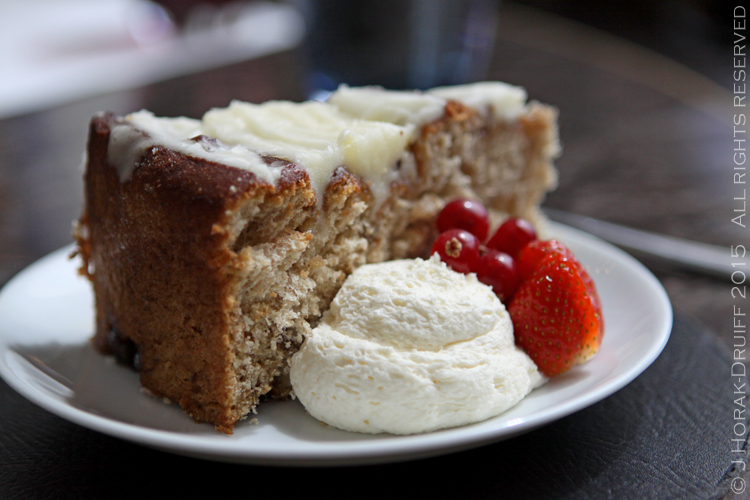 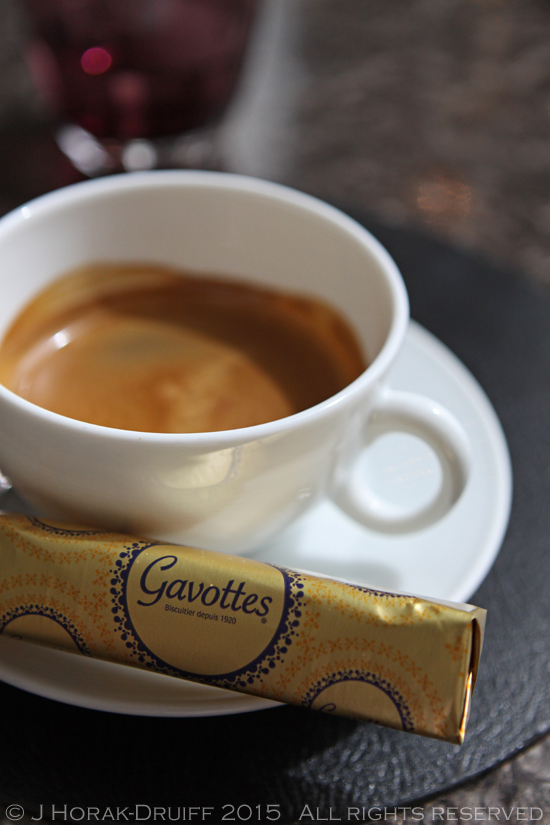 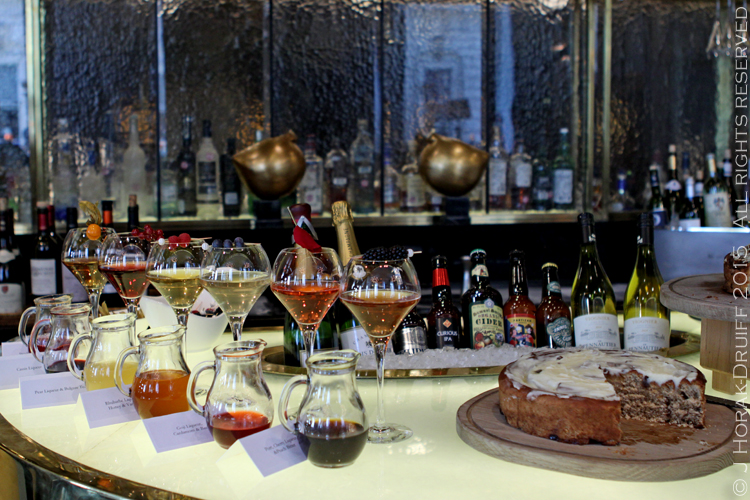 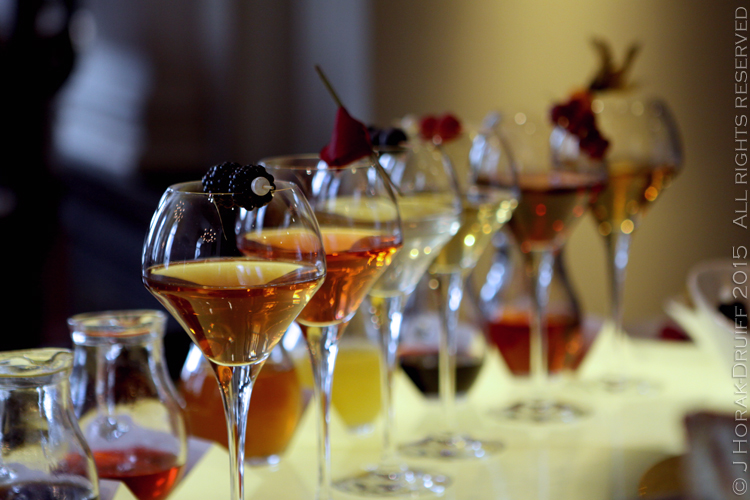 It had been a glorious three hours, spent eating really rather wonderful food, soaking up the lovely surroundings of the elegant room, being superbly looked after by the friendly and efficient staff, and watching the comings and goings on Waterloo Place. This is probably my fifth of sixth visit to The Balcon and each time I am reminded of how well they do what they do in providing an elegant room and haven of calm just off the chaos of Trafalgar Square; putting together an excellent menu of classics and soon-to-be-classics without ever veering into the senselessly exotic; and treating each visitor like a regular and valued customer.  If a 3 hour brunch in a pampered setting seems like just what you need to up the decadence levels in your life, then head for The Balcon next Sunday.  Le Brunch at The Balcon is priced at £20 per person for two courses (excluding alcoholic drinks) and is available from 12pm to 4pm every Sunday.

For two other perspectives on Le Brunch at The Balcon, have a look at my friends Andrew’s post and Neily’s post, or check out my previous post on dinner at The Balcon.

DISCLOSURE:  I enjoyed this meal as a guest of Sofitel St James but received no further remuneration to write this post.  I was not expected to write a positive review – all views are my own and I retain full editorial control.