You are here: Home / Restaurants / Pop-ups and supperclubs / ShareEast: a supperclub at the London Olympic Village Have you ever visited a former Olympic park?  I have – three of them in fact.  Two of them (Berlin and Barcelona) shared a kind of sad desertedness – walking among the venues it was as if you could almost hear the echoes of the crowds and the athletes, but now it was like the set of some sort of apocalypse movie like 28 Days Later.  I’m not saying that they are necessarily derelict and falling apart – and the Berlin venue is set in a rather attractive park. But neither of them could be described as vibrant, living spaces.  The third Olympic park that I am familiar with is our very own London Olympic Park (now rebranded the Queen Elizabeth II Park) in Stratford. You may recall my huge excitement at visiting the park in 2012 during the Olympic Games when it quite literally took my breath away with its fabulousness, but passing it on a rainy morning in the train a year later and seeing bits being sadly dismantled, I did wonder if the organisers’ grand vision of its post-Olympic use would ever come to fruition.

Fast-forward nearly three years to Spring 2015.  I have in fact been back to the Olympic Park twice – once to run a race which ended on the Olympic stadium itself (cue more excited hyperventilation!) and once to attend a track cycling event in the Velodrome (highly recommended!).  But both times that I visited, the park was basically a massive, muddy construction site that one had to pick one’s way through, and it was hard to imagine how it might eventually be transformed.  But when I visited most recently this month, the extent of the astonishing transformation was finally becoming apparent.  East Village, adjacent to Stratford International station, is the new residential district composed primarily of the former Olympic Athletes’ Village.  In total, over 2,800 new homes to buy or rent were created out of the athletes’ accommodation with about half being allocated to an affordable housing association.  The remaining stylish 1439 private homes were created by removing temporary partitions installed during the games to create a create a range of one to five bed homes, ranging from apartments to townhouses. The biggest change has been to add kitchens to the hotel-style rooms originally built, and in addition, there will be a range of retail shops and green space created to form a self-contained park-like community. In another innovative move, the majority of the 1,439 private homes are to be let on a rental basis, instead of being sold, and managed on a long-term basis by Get Living London. 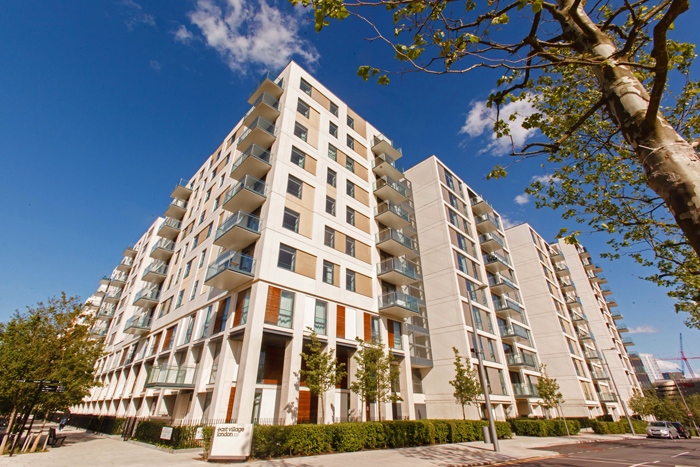 Because Get Living London are in this for the long haul, they have a number of innovative ideas for fostering a sense of community, and I was recently invited to experience one of them that has been launched in association with ShareEast. ShareEast is a unique scheme which brings together neighbours who value their time and their community to share skills and pool knowledge and they will be running a series of supperclubs in East Village. The supper club scheme will see participating members take turns to each host a monthly dining experience in their home for other members to attend and enjoy.  These can be a breakfast, brunch, lunch or a dinner – whatever suits the host.  Attendees to the East Village supper clubs will bring their own drinks to these meals and ShareEast will cover the cost of the ingredients, so that all the host has to do is prepare the meal and provide the venue – think Come Dine With Me (without the competitive element!). It is hoped that the scheme will encourage neighbours to get to know each other in a relaxed environment, while enjoying delicious food. 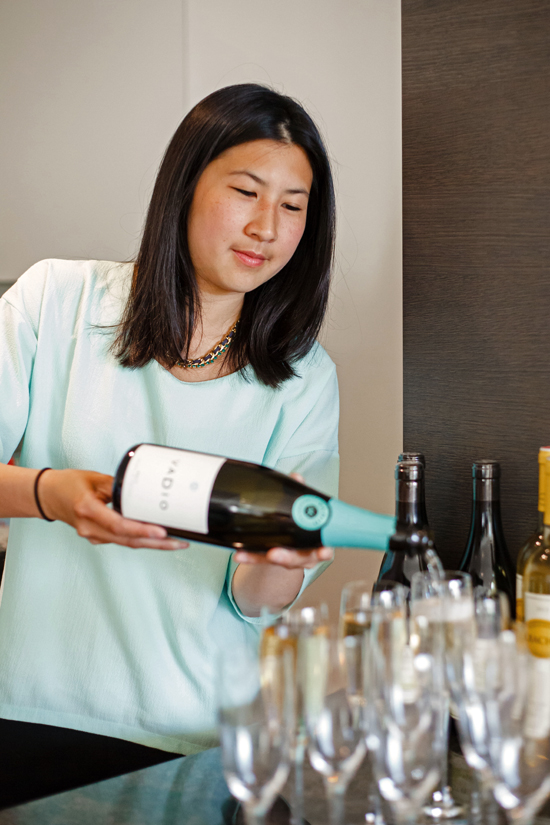 For our supperclub, we had the use of one of the two-bed apartments in East Village and the cooking expertise of Ravinder Bhogal, the young British chef, food writer and stylist who was discovered by Gordon Ramsay and whose debut cookbook Cook in Boots won the Gourmand World Cookbook Award for the UK’s Best First Cookbook.  After admiring the beautifully decorated apartment, we all had a chance to admire the spectacular view while chatting over a glass of wine from Bottle Apostle, an independent wine retailer who recently opened their fourth London shop in East Village. Their philosophy is that anyone should be able to buy a great bottle at a competitive price, without compromising on flavour or quality and to this end they carry a broad range of wines at various price points and provide customers with wine expertise “without the attitude”. The charming Miranda had certainly provided us with four unusual and excellent wines for our dinner, starting with the Vadio Metodo Classico Brut NV, which was a great accompaniment to our canapés of salmon tartare with bulghur wheat, pomegranate and spices. 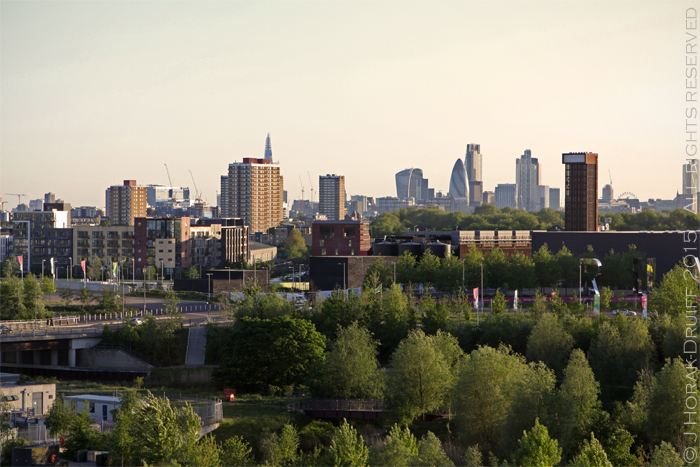 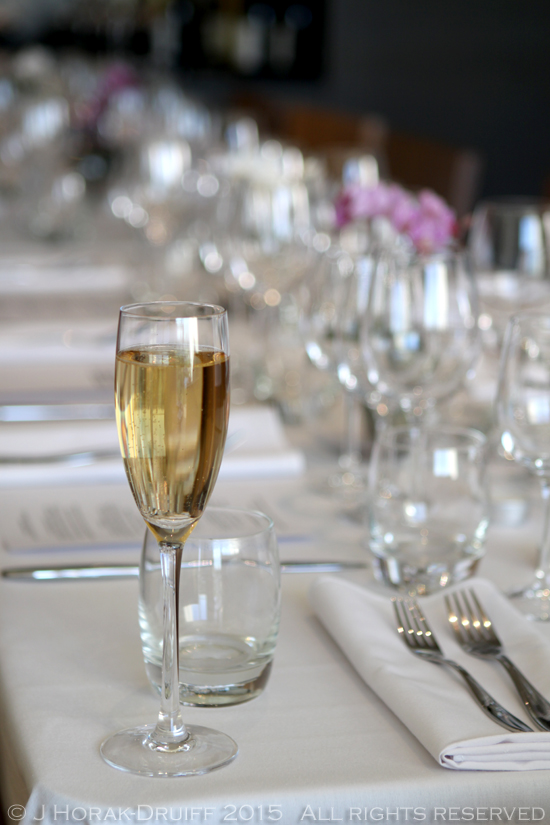 Once canapés were done, we moved indoors to the long communal table which easily seated 12 and provided a ringside seat into the open-plan kitchen were Ravinder was preparing our first course: smoked aubergine with saffron yoghurt, pistachios, pine nuts and pomegranates. This was a wonderfully complex dish full of warming spices that matched very well with the notes of lime and blossoms in the Saint Peray “Version” 2013 from Domaine Francois Villard, a Rhone blend of Marsanne and Roussanne grapes that easily stood up to the spices in the food. 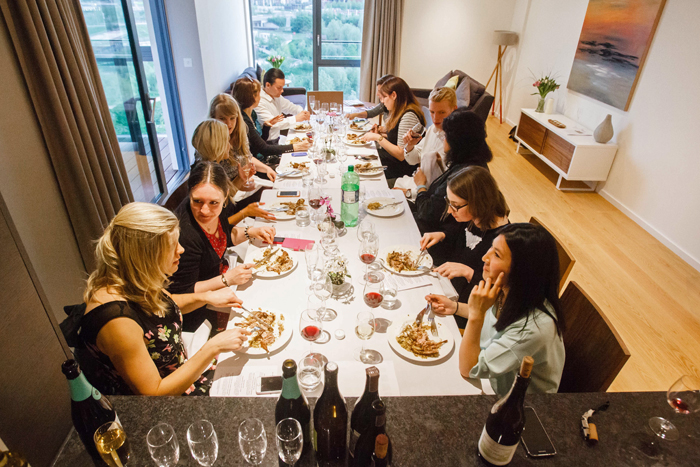 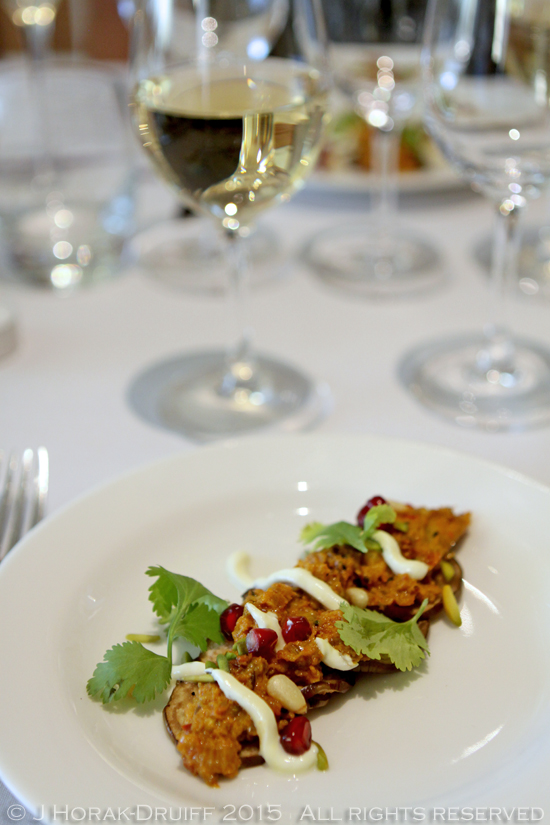 The next course was infused with Middle-Eastern flavours and consisted of whole roast honey-spiced quail served on Mujadarra rice (Lebanese rice with lentils, spices and caramelised onions) and topped with crispy onions.  To match the spicy, succulent quail, Miranda had selected something South African: the 2013 Blank Bottle Original Spaniard,  a blend of Carignan, Grenache Noir and Mourvedre from The Swartland region – a soft and juicy mouthful of ripe sun-warmed berries and definitely something I would buy again (plus I loved the minimalist label!).  And for dessert, Ravinder spoilt us with beautiful rose-scented panna cotta with cardamom-stewed rhubarb, pistachio and coconut meringue, and honey kataifi (brittle). I loved the contrasting textures in this dish, as well as all my favourite subtle spice flavours on one plate. The wine match also turned out to be my favourite of the evening – a 2013 Weinblaubenhof Kracher Spätlese Cuvée, an Austrian dessert wine made from a blend of Pinot Gris, Welschriesling and Muscat Ottonel.  The vibrant golden colour and the nose of apricots and blossoms hid a surprisingly well-balanced off-dry wine that is dangerously drinkable with or without dessert. 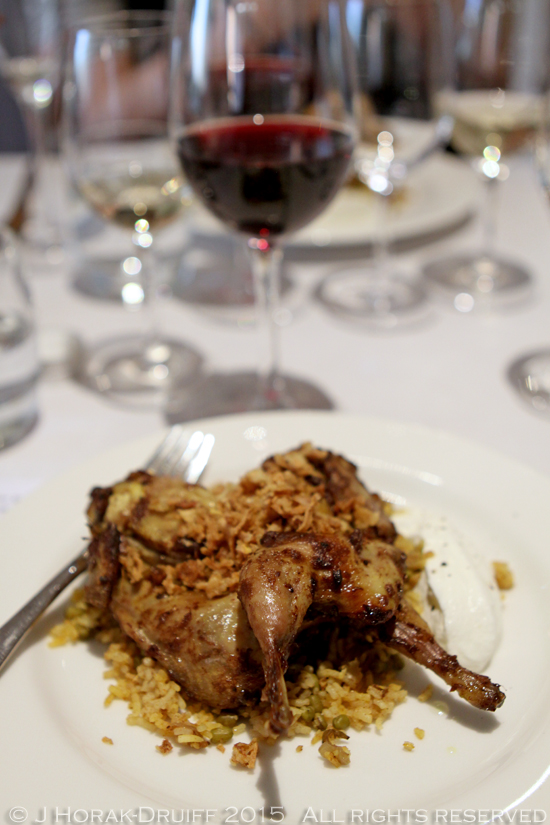 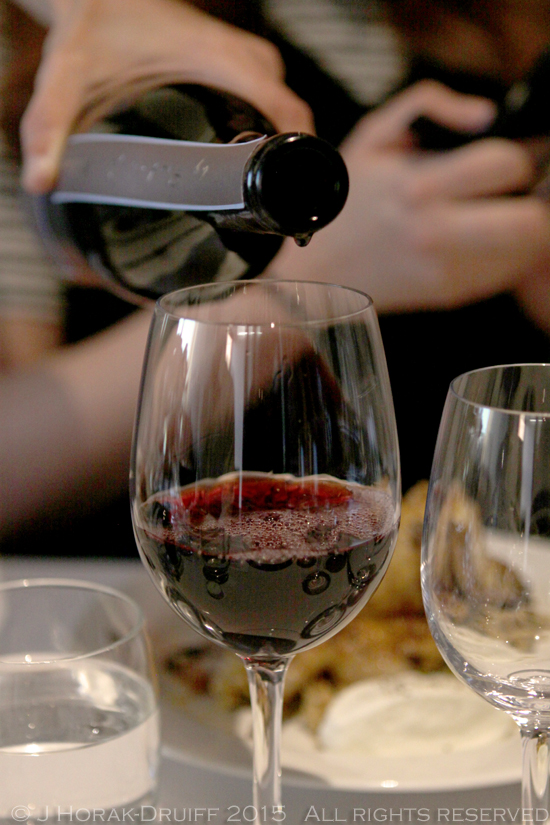 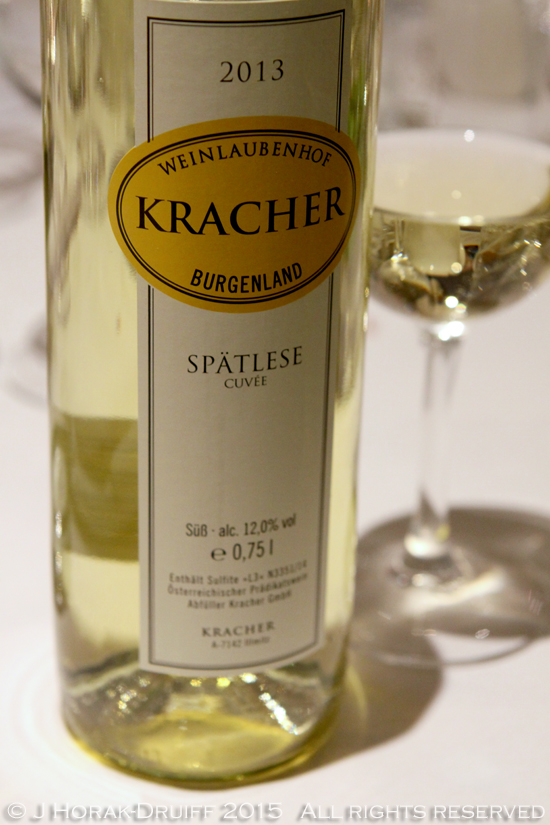 Sadly, that was the end of dinner, but nobody was in a hurry to leave, and so as befits good supperclub guests we lingered a while, enjoying animated conversations at the table and watching as that spectacular view faded from dusk to night.  For anybody who still thinks of E20 as being a remote and desolate backwater, do yourself a favour and pay East Village a visit.  It’s not only London’s newest neighbourhood, but having had the benefit of an overarching plan, it’s also one of the city’s most livable and surprising neighbourhoods, with an academy already open, a health centre planned, and all the Olympic sports amenities on your doorstep (and Westfield Stratford City is next door, for that all-important retail therapy!). 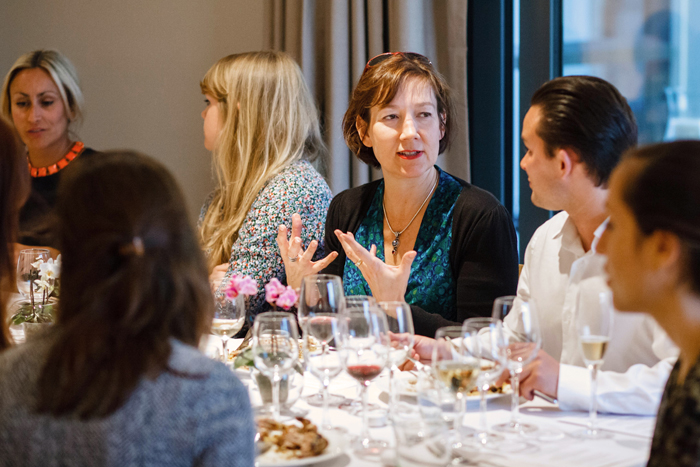 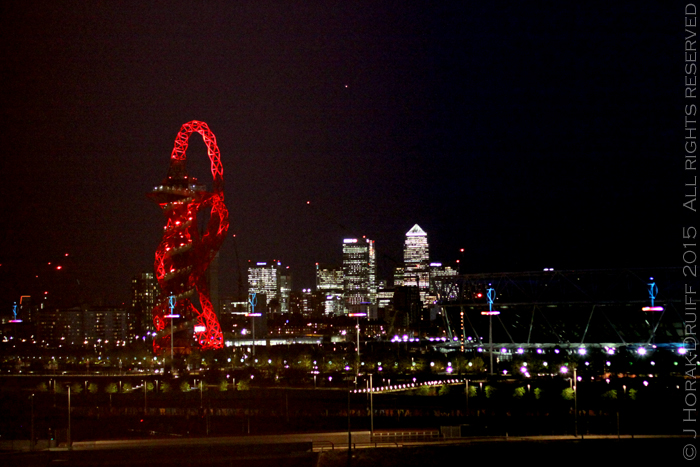 For more information on the supperclubs and other events taking place at East Village, as well as renting a home there, visit their website.

DISCLOSURE:  I attended this event as a guest of Get Living London but received no further remuneration and was not required to write a positive review.  All opinions are my own and I retain full editorial control.