You are here: Home / Restaurants / London restaurants / A Chiva-Som dinner at the Waterside Inn It’s not often that I feel out of my depth in social situations.  15 years of living abroad, coupled with the constant stream of new people I meet through blogging and my natural affinity for making small talk has meant that walking into any room full of strangers and being expected to socialise holds no terror for me. From CEOs to diplomats to students to… well, just about anyone, I can happily chat to all of them and say something intelligent on most topics. But put me in a room of spa journalists (a career that was sadly never mentioned as an option in my high school career counselling!) and, as I discovered last week, I feel woefully under-equipped to join the conversation.  You see, detoxing is not something that occurs here at Cooksister HQ and my idea of heavy pampering runs to a pedicure and a wax…  So as talk ebbed and flowed between exotic spa resorts and a comparison of their dietary regimes, I smiled, nodded and proceeded to examine my surroundings instead – and what lovely surroundings they were.

The Waterside Inn in Bray is one of the UK’s most respected and iconic restaurants and its founders, the Roux brothers Michel and Albert, have made a lasting impact on British eating habits. In 1967 the opened Le Gavroche in London and in 1972 they acquired a traditional English pub in a quiet Royal Berkshire village, which they transformed into an elegant hotel and restaurant:  the Waterside Inn. Only two years later, the restaurant obtained its first Michelin star in 1974’s inaugural Michelin Guide; then a second in 1977; and finally a third in 1985.  Although in 1986 they split their businesses with Albert choosing Le Gavroche and Michel remaining at the Waterside Inn, the restaurant has retained its 3 Michelin stars continuously for a full 30 years – the only UK restaurant to do so.  It truly is as if one is dining with culinary royalty (and as we sat down to dinner in the private dining room, we were informed that this is the room in which the Queen chooses to hold private dinners – so not only culinary but actual royalty!).

The occasion was the release of a cookbook called Cooking with Light, written by Chef Paisarn Cheewinsiriwat and with a foreword by Michel Roux OBE. Chef Paisarn is the executive chef at the world-renowned Chiva-Som health and wellness resort in Thailand which is where Michel Roux first got t know him and began to admire his work. Chiva-Som (meaning “haven of life”) has become a benchmark for excellence in the luxury spa arena, fusing Eastern philosophies with Western health and beauty science and Thailand’s unique hospitality.  Nestled within tropical beachfront gardens and boasting a variety of luxury accommodation options, Chiva-Somalso prides itself on gourmet spa cuisine – no protein shakes and bland steamed vegetables here.  Chef Paisarn has created a unique blueprint for healthy eating that fuses the flavours of Thailand with healthy cooking methods and recipes that are high in nutrients but low in salt, fat and sugar, and it is neatly encapsulated in Cooking With Light, Chiva-Som’s fourth cookbook which our dinner was going to showcase. But before we could get on with the serious business of eating, Michel Roux himself together with son Alain Roux who now heads the kitchen, joined us to introduce Chef Paisarn.  Chef paisarn talked us through the menu and the Chiva-Som philosophy of eating, emphasising healthfullness as well as flavour. 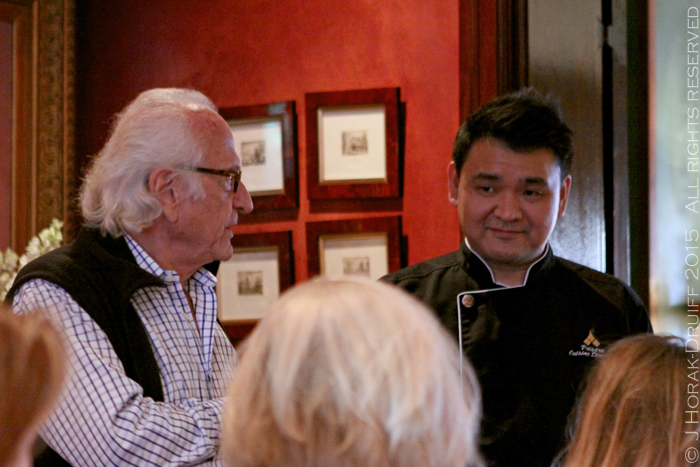 To illustrate the fact that food can be tasty as well as healthy, we were served fresh, warm breadrolls accompanied not by butter but by a whole bulb of gently caramelised roasted garlic – perfectly spreadable and packed with flavour and goodness.  Our first course arrived as pretty as a picture: raw cauliflower salad with pistachio paste, topped with slices of dehydrated watermelon. This was glorious – the cauliflower was satisfyingly crunchy while the pistachio paste lent both colour and richness.  The dehydrated watermelon was a revelation too – like hot pink slices of fruit leather! Inspired.  Paired with this we had a wonderful 2010 Daniel-Etienne Defaix Chablis from the restaurant’s all-French wine cellar. 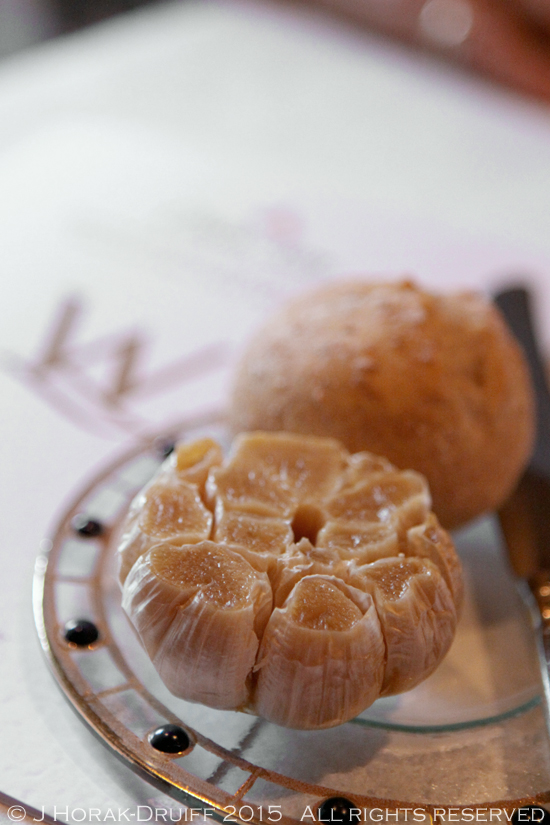 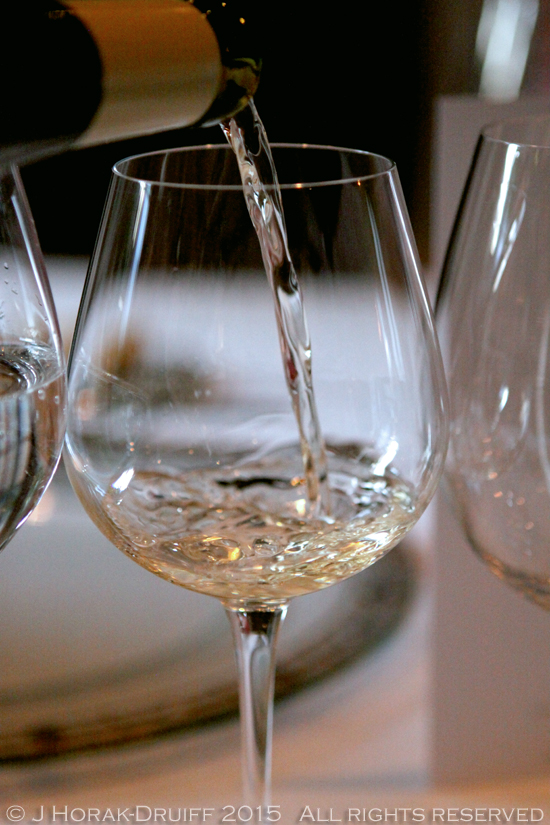 The next course was served with a bit of tableside theatre: a chilled cucumber and avocado soup with pan-seared scallop and apple.  This was a lovely summery dish full of subtle flavours and textures. The scallops were barely seared, retaining their fresh marine flavour; the apple matchsticks added crunch, and the avocado and cucumber soup was smooth and rich. 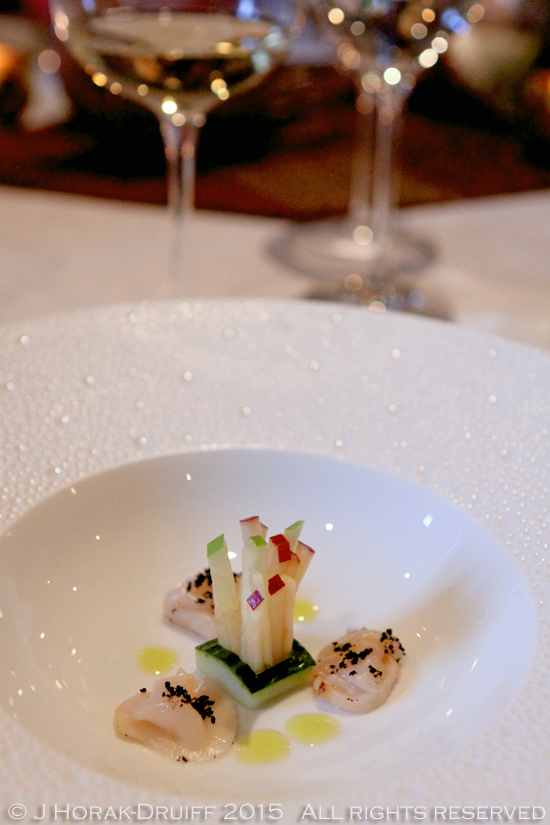 The next dish was the intriguingly named sole with mushroom XO sauce.  Now as anybody who has been to Hong Kong will know, XO is an umami-bomb of a sauce, made from chopped dried seafood, chilli, onions and garlic.   In this version, Chef Paisarn had tried to recreate the flavours in a shellfish-free version, using flavoursome mushrooms as a base for the sauce instead of seafood.  The result was delicious – fillets of sole wrapped into cones and served on slices of oyster mushroom and broccoli tips, topped with tiny honey-coated crispy mushrooms and sesame seeds. It was a riot of flavours and textures – a perfect plate.  The meat course consisted of shredded slow-cooked deboned lamb shank in a light curry sauce, wrapped in kale leaves and served with lotus seed puree and diced chilli pineapple.  This was another revelation in terms of flavour – who knew that lightly curried lamb and pineapple would work so well together?  I also loved the silky texture and nutty flavour of the lotus bean puree. 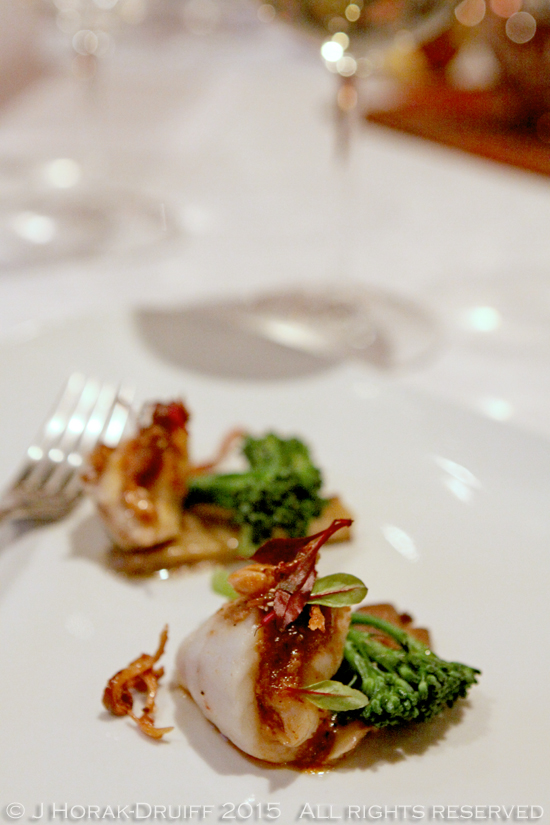 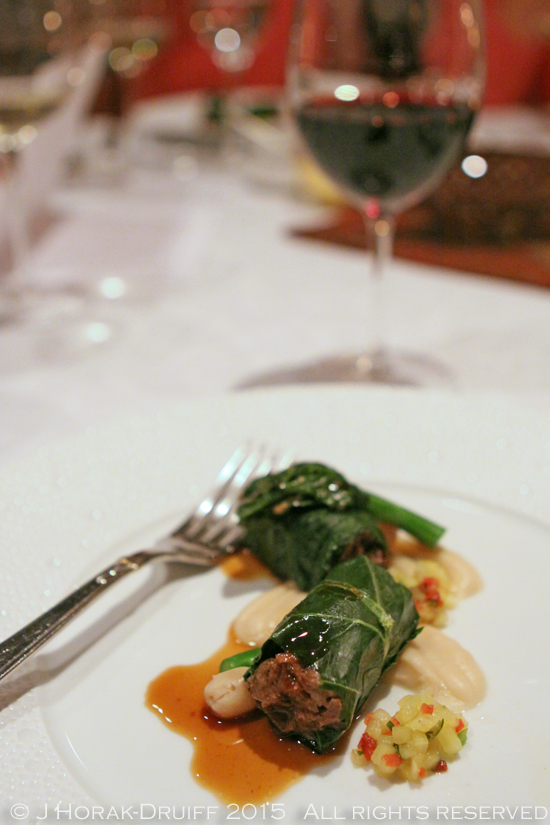 For dessert, we had whole pears and prunes poached in jasmine tea with coconut and pistachio creme anglaise and a wafer-thin slice of dehydrated pineapple. One of the things that always annoys me when eating a dessert of poached pears is the difficulty of trying to scoop out spoonfuls of the fruit without having it slip and slide out of your bowl and onto your lap.  But it was not a problem in this case – if you look closely you will see that each pear had already been conveniently sliced into bite-sized segments but left dangling by a thread at the stem, so that removing an elegant mouthful was easy – loved this attention to detail!  The nuttiness of the pistachio creme anglais worked well with the pears, as did the pineapple – a well-balanced plate of flavours and textures.  And to finish the meal, we were served some beautiful roasted lemongrass tea that Chef Paisarn had brought all the way from Thailand, together with some healthy petit fours: coconut and sesame cookies, and seed bars made with flaxseed, sunflower seeds and almonds, bound together with honey.  So delicious, you’d struggle to believe they are healthy. In fact, that would be how I would sum op the entire meal – innovative and beautifully plated cuisine that seemed far too tasty to be healthy. And of course, made all the more special by being served in the gorgeous surroundings of the Waterside Inn. 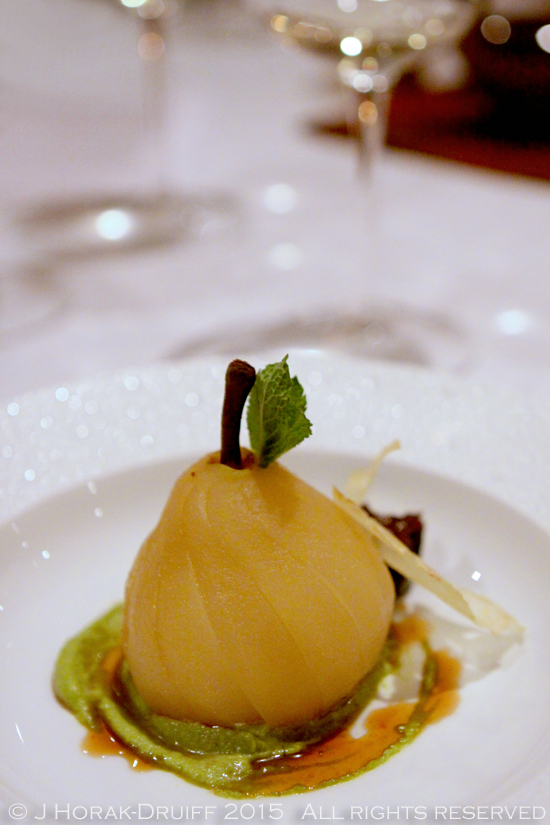 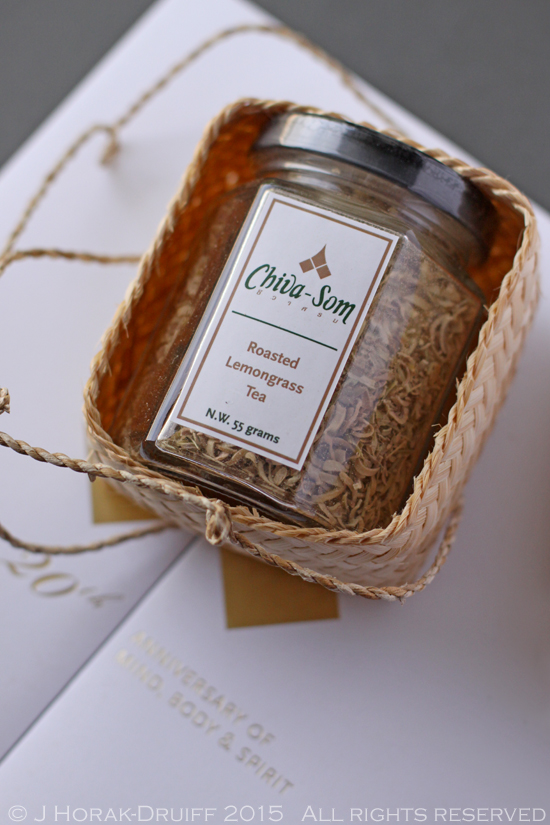 We were also each given a copy of the Chiva-Som Cooking with Light cookbook, which is a visual delight.  The theme of the book is the idea that light is needed to nourish and grow plants, and these wholesome, nourishing foods produced by light are key to boosting our own health and wellbeing. The 130 recipes are divided into chapters on breakfast, juices, salads & appetisers, dressings & condiments, soups, mains and desserts and showcase the best of Chiva-Som’s innovative spa cuisine and to inspire you to continue your healthy journey at home. The book is available via the Chiva-Som website. 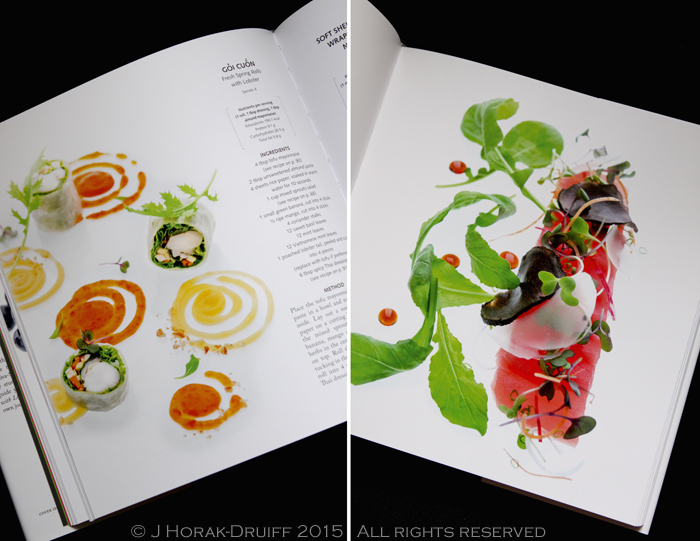 The Chiva-Som resort is situated in Hua Hin, about three hours drive south of Bangkok in Thailand and offers a range of packages to suit all pockets, from 3 to 14 day retreats, focusing on anything from weight management to detox to yoga to inner peace.  Cosmeceutical procedures are also available at the on-site Niranlada medi-spa. The resort is celebrating its 20 year anniversary this year with a number of special promotional packages.

DISCLOSURE:  I enjoyed this meal as a guest of Chiva-Som but received no further remuneration to write this post.  I was not expected to write a positive review – all views are my own and I retain full editorial control.