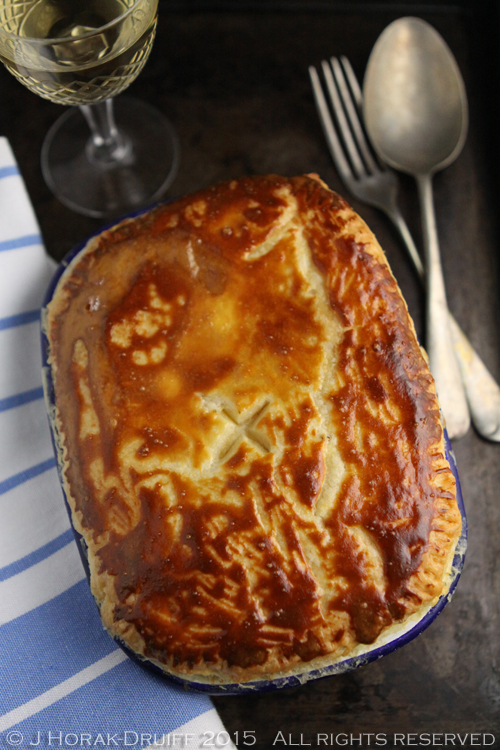 Like most children , I suspect, I grew up with the notion that miracles are all-singing, all-dancing  once-in-a-lifetime events.  The blind seeing; the lame walking; the waters of the sea parting; water turning into wine – you get my drift.  They were performed by special people, and most of us would trudge through our lives without ever experiencing one.  But the older I get, the more I realise that miracles are all around us, every day.  All we have to do is acknowledge them.  Did you know that there are 206 bones and 640 muscles in the human body.  The mere fact that most of us wake up in the morning and can swing our legs out of bed and walk to the bathroom with all these muscles and bones working perfectly in unison is nothing short of a miracle. Although we take it for granted, getting inside a metal tube in London, flying through the air at hundreds of miles an hour, and emerging unscathed a couple of continents away after less than a day would have struck our great-grandparents as a complete miracle.  And anybody who has tasted Cabernet Sauvignon grapes straight off the vine will agree that winemaking is a miracle.

I was reminded of this recently when I was interviewing Charlie Turnbull and he said that cheesemaking is an example of an everyday miracle.  On averagem there are 118 different varieties of cheese available in supermarkets in France alone, running the full gamut from the mildest soft fresh cheese to the pungent flavours of a Roquefort.  And every single one of those cheeses started out as the same basic substance:  fresh milk. You apply a bit of heat, you add a bit of rennet, you drain off some liquid, you decide whether to compress it or not; you let it grow a rind or not; you decide how long to mature it before eating – and before you know it your milk has morphed into hundreds of wildly divergent textures and flavours of cheese. A miracle, no?

Anybody that has been skiing in the French Alps has probably had the pleasure of meeting Reblochon, the iconic cheese of Haute-Savoie, in the form of a gooey tartiflette. But not everybody knows its cousin Comté, made just on the other side of Geneva. Comté is from the Jura Departement of France, which falls under the Franche-Comté province north of Lake Geneva. The cheese has been made there since about the 12th century, when shepherds would spend the Summer months in their remote huts of the Jura massif. Because they were far from any market towns, they would pool their milk and allow the cheese to mature over the summer before being carried to market in the Autumn. Today, Comté is officially AOC protected, which means that to call itself Comté, a cheese has to conform to strict requirements throughout its production process. Only milk from Montbéliarde and French Simmental cows may be used and each is given an entire hectare of pasture land in the summer months. They eat a natural and diverse grass diet and feeding them with sileage is prohibited because it adversely affects the quality of the milk. The cheese has to be made according to traditional methods in about 170 small village dairies known as fruitières, and milk comes from farms within a 8km radius to ensure freshness. Once the cheese has been shaped and pressed, it is stored in a maturing cellar for at least 4 to 18 months to acquire its complex flavours. After 4 months each cheese is tested for quality and those scoring over 14 points are given a green band representing excellence. Rounds given between 12-14 points are given a brown band, and rounds that score less than 12 points are excluded from carrying the official Comté label

I recently attended a Comté cheese evening at Divertimenti cooking school in west London, hosted by the lovely Laura Pope, where we were able to taste 12, 18, 24 and 36 month old Comté. It’s hard to believe that they are all the same cheese as they range from creamy, mild and nutty right through to sharp, umami flavours with a hint of ammonia and a lightly crunchy texture. The crunch (also found in aged Cheddar or Parmesan) is not salt crystals as many assume but tyrosine clusters. Tyrosine is an amino acid and during the ageing process of the cheese as protein chains unravel, the tyrosine remains behind as slightly crunchy bits. It’s not a fault but a sign of a well-aged cheese.  During the course of the evening, Laura talked us through two recipes and then we had a chance to recreate them. The first was a recipe for Comté cheese scones, which had us mixing grated Comté cheese into the dough, and sprinkling it on top of the scones before baking. They went down a treat topped with a little fig jam and a few more slices of (what else?) Comté cheese! 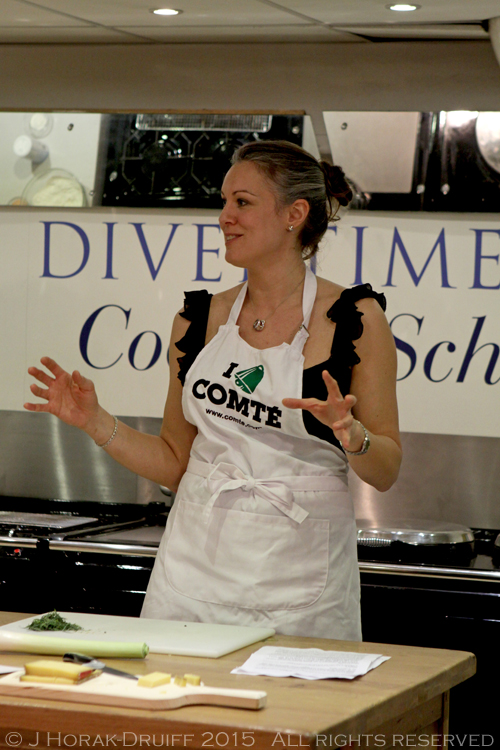 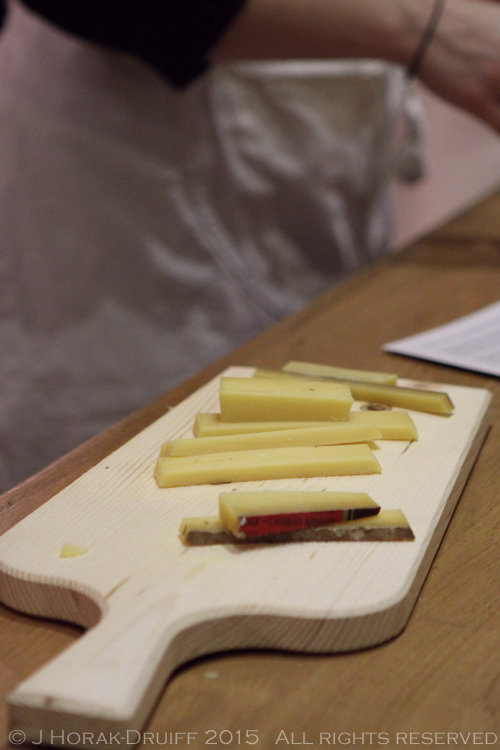 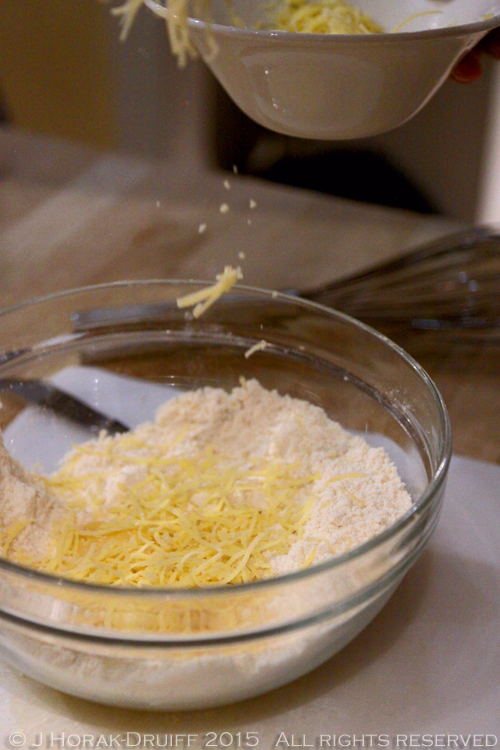 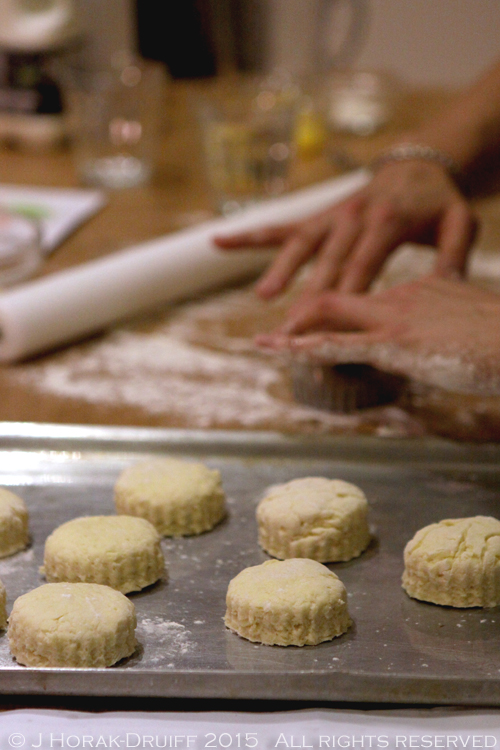 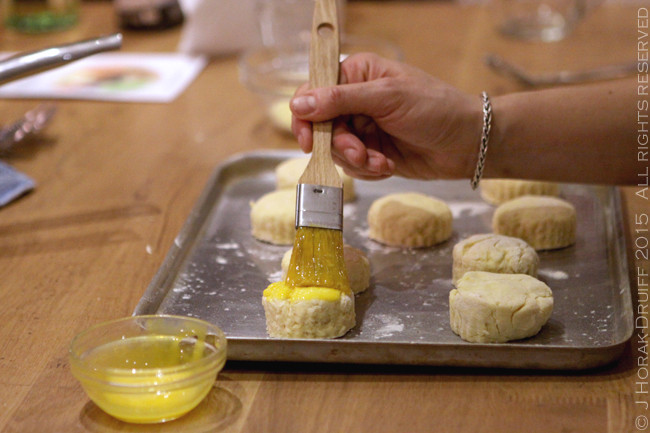 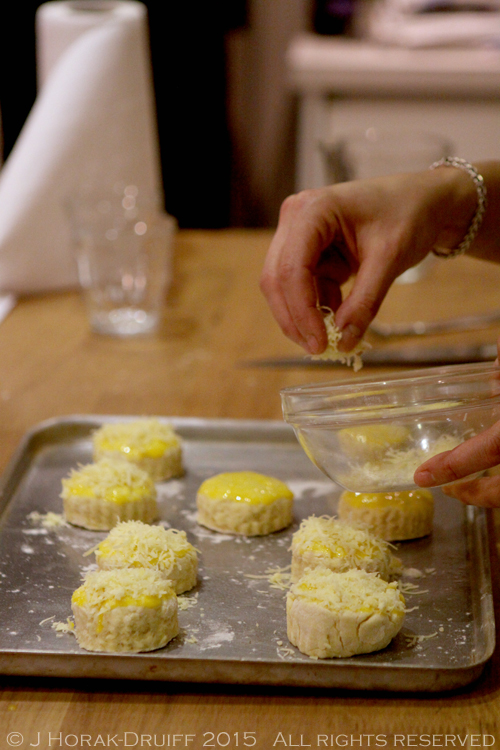 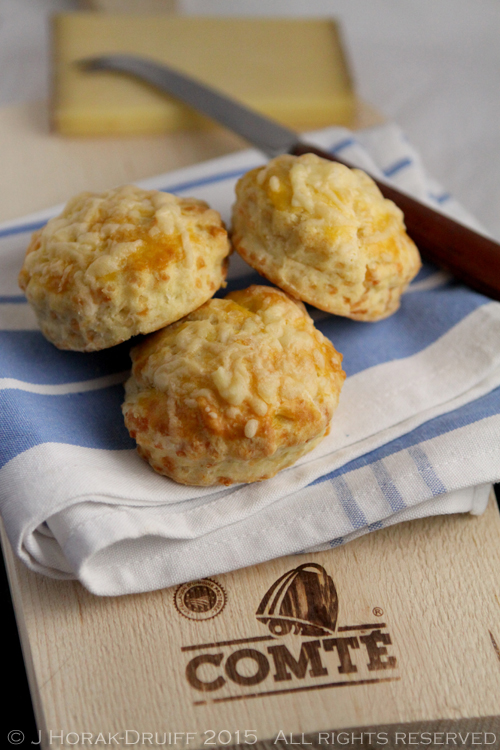 Because the scone pastry needed to rest at various stages, Laura also showed us how to prepare another dish, with the steps interspersed between the scone prep: a cheesy chicken, leek and tarragon pot pie. The British do love their pot pies (a single crust pie with only a pastry lid and no base), and chicken and leek is a classic filling. This one was given a suitably French twist with the addition of aromatic fresh tarragon and a generous amount of Comté cheese. To speed things up, we used cooked chicken, and prepared puff pastry but of course you could roast your own if you wanted to. I liked Laura’s tip to remove yuor white sauce from the heat entirely before stirring in the milk as this really helped to prevent lumps. I also liked adding a little rim of pastry offcuts to the edge of the pie dish before putting the lid on, which helps to raise the pastry lid above the filling. 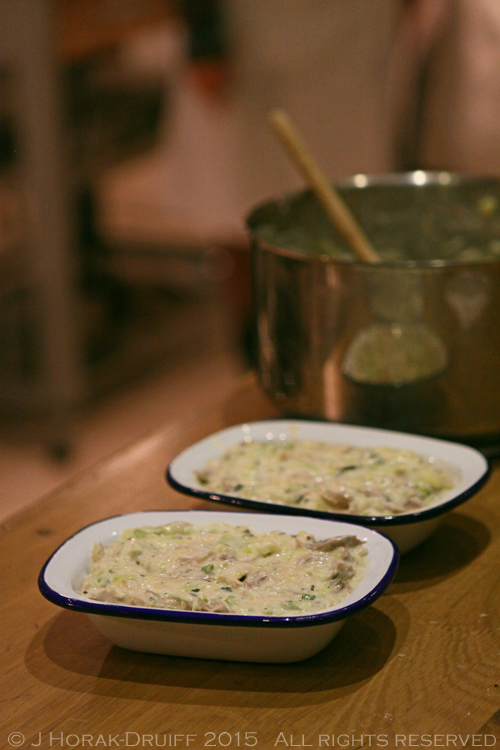 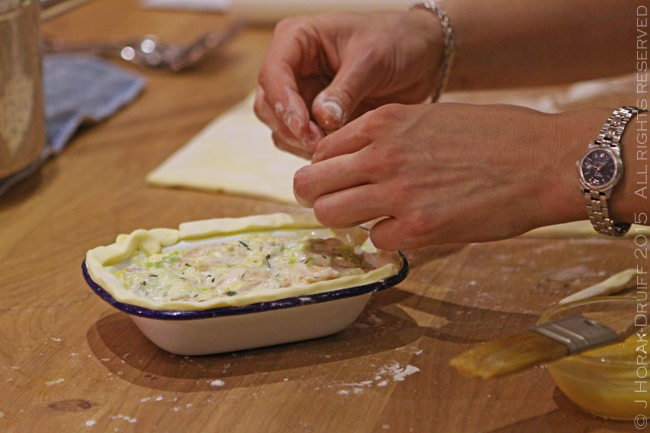 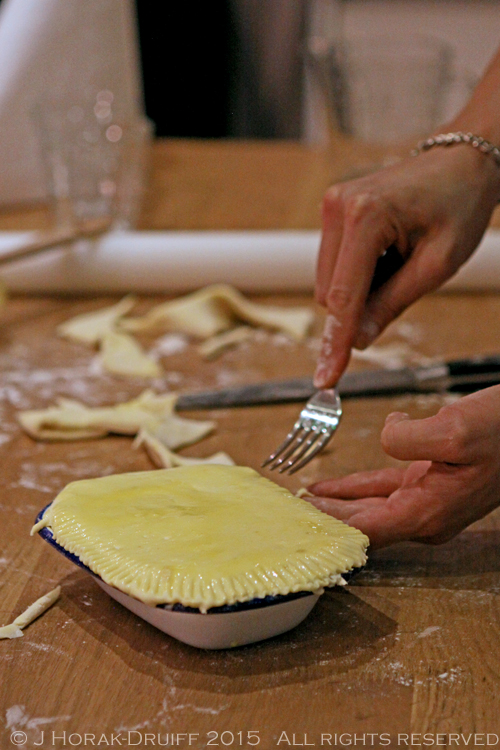 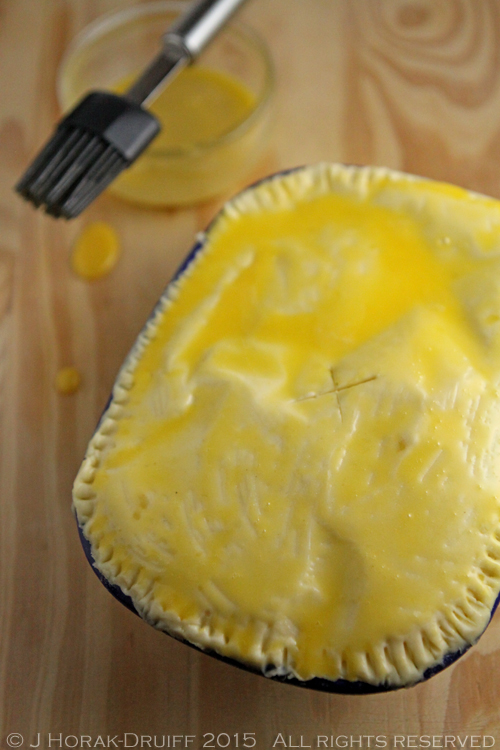 Best of all was that once we had prepared our pies, we were given the option of taking them home, unbaked, so that we could eat them for dinner the following evening – which is exactly what I did. I don’t think the Tube journey home realyl improved the appearance of my pie crust (!), but it still came our puffy and golden, and the filling was delicious – rich and creamy with the cheese adding a lovely savoury tang. We used the 12 month Comté in our dish but if you wanted to up the umami quotient of the dish you could also use an older Comté. The recipe below was supplied by Comté and you can find more recipes for using this versatile cheese on their website. 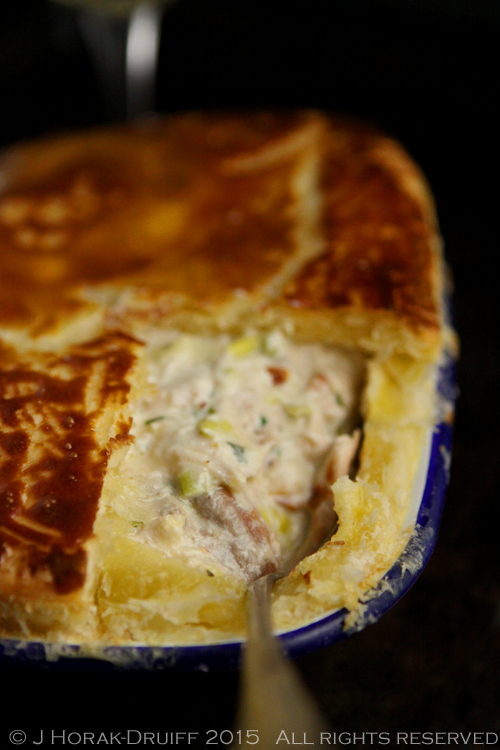 If you enjoyed this pot pie recipe, you may also enjoy… 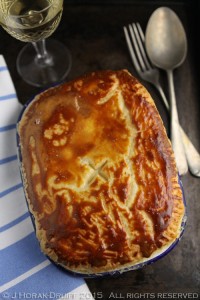 Print
Prep time
30 mins
Cook time
20 mins
Total time
50 mins
This recipe adds a delicious twist of French Comte cheese to an English classic: chicken and leek pot-pie.
Author: Jeanne Horak-Druiff
Recipe type: Entree
Cuisine: British
Serves: 4
Ingredients
Instructions
Wordpress Recipe Plugin by EasyRecipe
3.2.2929
DISCLOSURE: I attended this cooking evening as a guest of Comté cheese but was not required to write a positive review. I retained full editorial control and all opinions are my own.