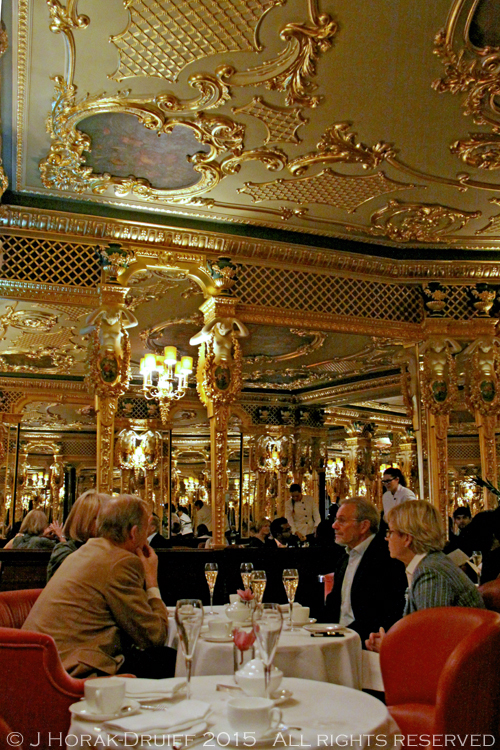 Perhaps it is a consequence of growing up in a relatively young country, but even after fourteen years of living in London, I remain fascinated by the extent to which old things are preserved in Europe. I barely have one glass left from the year we arrived in London, and yet in the V&A I can see perfectly preserved glasses that are centuries old. In my hometown, the oldest structure is the ruin of an English fort built in 1799. But in London I walk past a chunk of the old Roman city wall (built about 200AD) and the Tower of London (started in 1087) every day on my way to work, and a house built in the early 1600s that survived the Great Fire of London is on my regular lunchtime walking route. I think that this astonishing core of history, surrounded by the veneer of a modern world city is one of the biggest reasons why I love living here so much. In London, you don’t just read about history, you can actually pay it a visit.

And that’s what Rosana and I recently did when we went for afternoon tea at the Hotel Café Royal on Regent Street. Established by a French wine merchant called Daniel Nicholas Thévenon and his wife Celestine in the 1860s, by the end of the 19th century the Café Royal had established a firm reputation for excellent hospitality, dining and entertainment. It is said that French gourmet cuisine was introduced to the British capital here for the first time and the hotel also became known as possessing the greatest wine cellar in the world at the time. Over the years, the hotel has been frequented by writers such as Oscar Wilde, Arthur Conan Doyle, H G Wells and Rudyard Kipling; royalty such as Edward VIII, George VI and Princess Diana; and entertainers including Brigitte Bardot, Elizabeth Taylor, Richard Burton, Louis Armstrong and David Bowie. In fact, Oscar Wilde was such a regular visitor that it was here in the Grill Room at the Café Royal that he was dining with his beloved Bosie (Lord Alfred Douglas) when Alfred’s father the Marquis of Queensberry arrived and found them to be dining together, to his shock. When the hotel was completely renovated and extended in 2012, it should therefore come as no surprise that the Grill Room was renamed after its famous patron, Oscar Wilde. 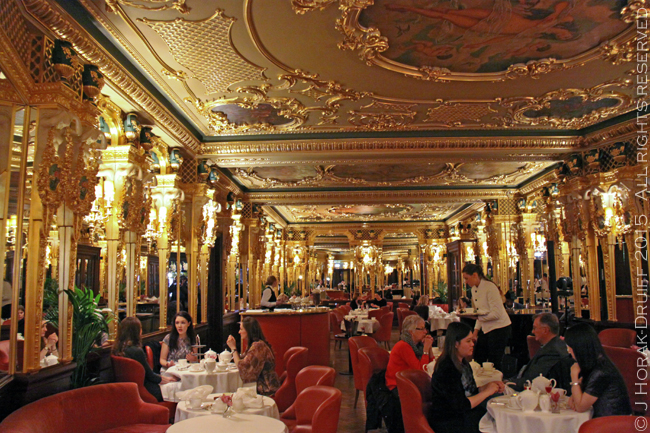 Walking into the Oscar Wilde Bar is a little like walking into the Versailles’ Hall of Mirrors in miniature. The sensitive restoration has preserved the lavish Louis XVI-esque 1865 interior lined with floor-to-ceiling mirrors, its ornate painted ceiling panels, and its dazzling gold rococo plasterwork.  The mirrors make the room seem to stretch on into infinity and the gold is quite dazzling – once seated on our red leather banquettes it took us a few minutes to take it all in. Although the Oscar Wilde Bar is also open for cocktails, light dinners and occasional cabaret evenings, we were there specifically to try the High Society Afternoon Tea. We started with an optional glass of Champagne (Veuve Cliquot, Veuve Cliquot Rosé or Dom Perignon, depending how flush you are feeling!) to accompany the rather intriguing amuse bouche:  Low Sidecar muffin.  This little marvel consisted of a basil and Gruyere mini muffin topped with a generous dollop of truffled cream cheese and a little pipette containing apple juice which you could either squeeze into the muffin or (in my case) directly into your mouth.  A superb and whimsical start to the afternoon. 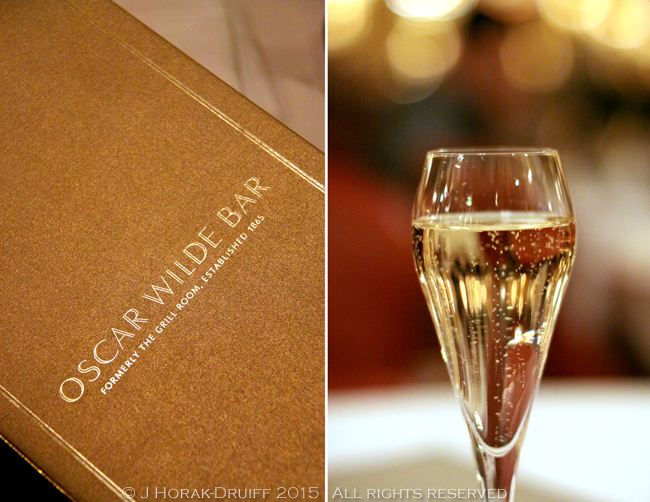 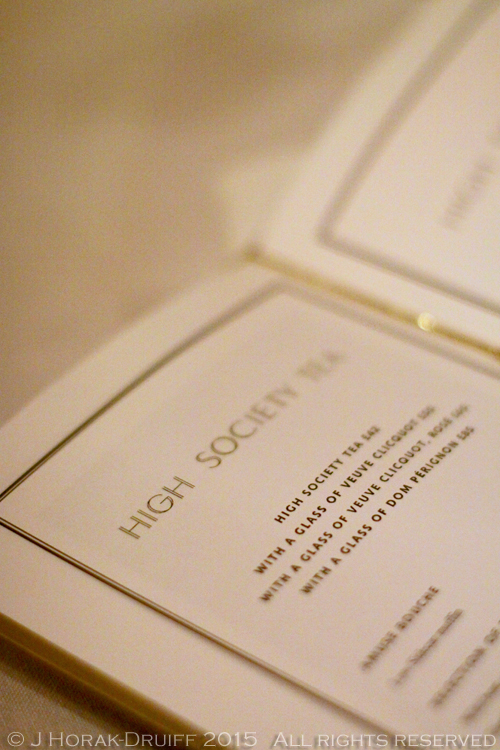 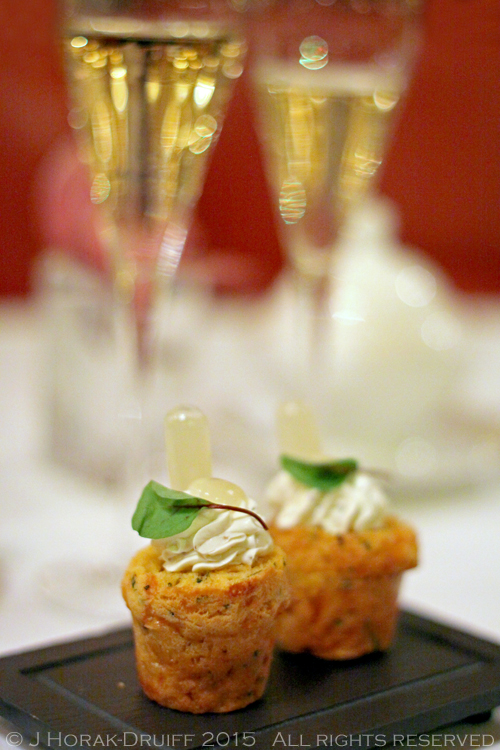 Next up was an elegant little 3-tiered stand groaning under the weight of savoury sandwiches and pastries.  I am always a sucker for the savoury and my heart sinks when an afternoon tea’s savoury selection is a listless plate of sandwiches.  This, by contrast, was a selection of sheer beauty.  Where to start??  On the bottom tier were beautiful little crustless cucumber and cream cheese sandwiches on beetroot bread, topped with a flourish of caviar – simple and delicious. Next to them were excellent mini bagels generously heaped with buttery London Cure smoked salmon on a horseradish mayo, topped with half a quail egg.  The middle contained both my favourites, and I would be hard-pressed to choose between them.  On the one hand, there was the pillowy mini brioche roll generously filled with prawn cocktail in a Marie Rose sauce – a retrotastic treat.  On the other, there was a perfect little warm gougere, filled with creamy goat’s cheese and a slick of red wine jelly, which was a mouthful of heaven.  Seriously. Finally, on the top tier we had a little mustard seed-topped bun dilled with wild boar salami, pickled apple and mustard, and topped with  a morsel of pork crackling.  And to complete the piggy goodness, there was a little mini chorizo Wellington – a disc of spicy chorizo encased in puff pastry.  I could happily have eaten refills of this selection all afternoon! 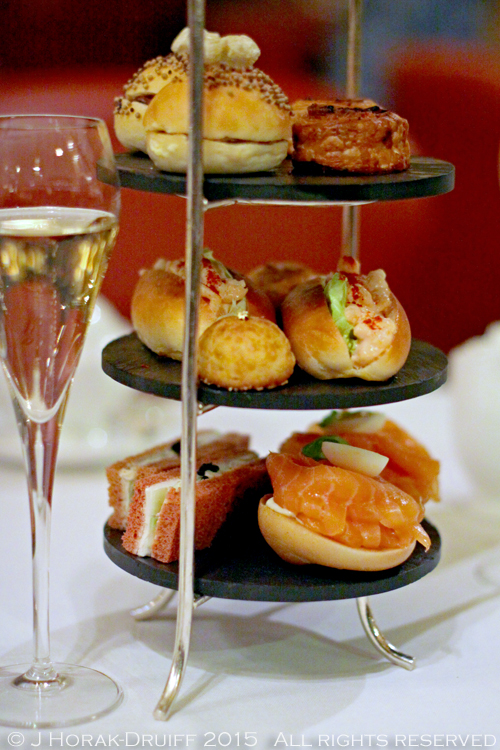 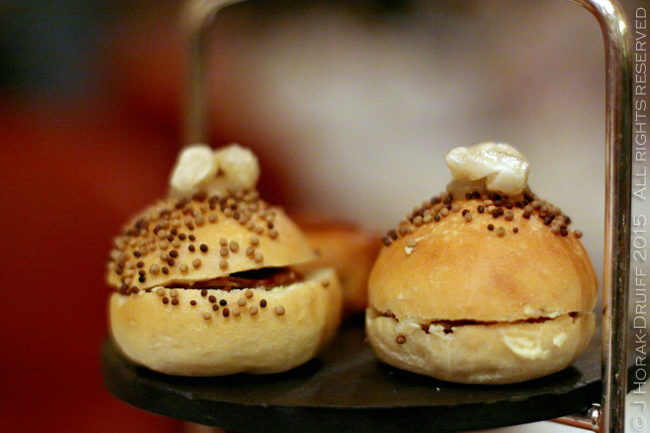 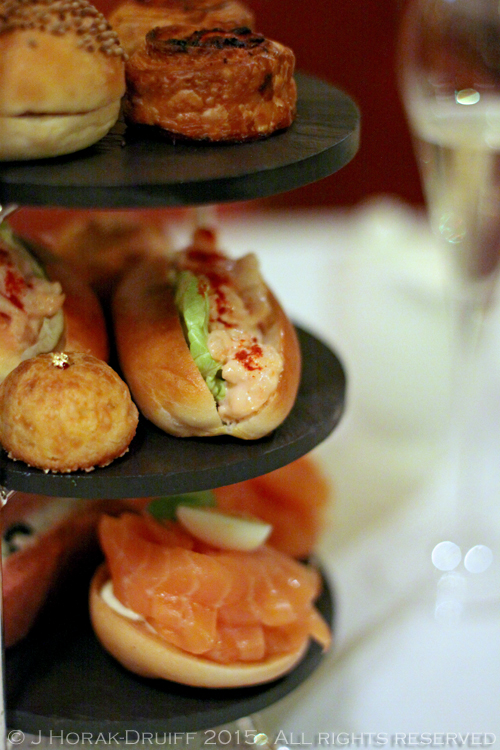 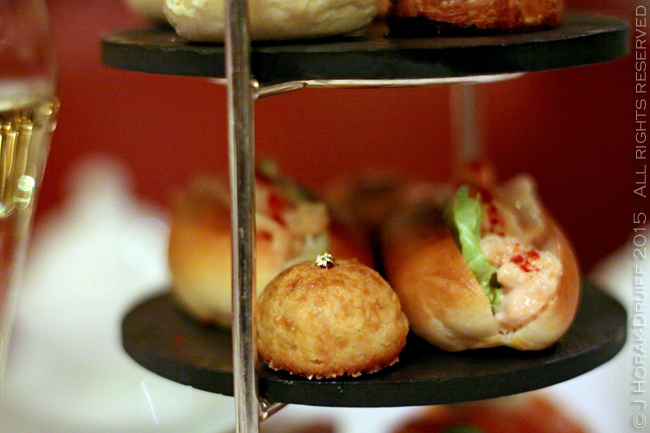 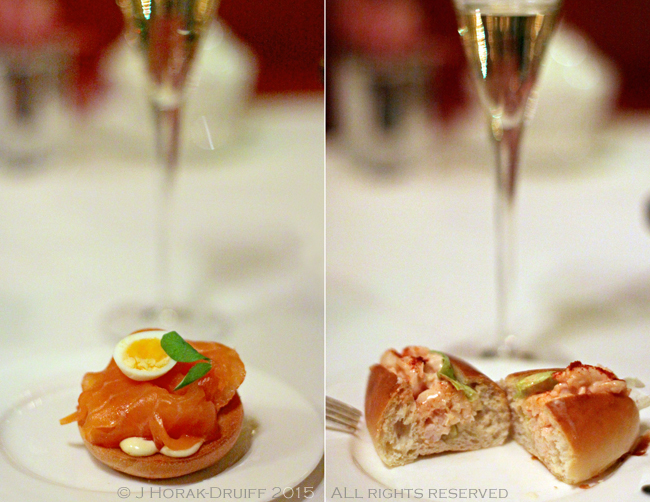 Between the savoury and the sweet courses, we were served a palate cleanser of a chilled fruit tea (a beautiful crimson colour but rather reminiscent of Ribena!) accompanied by what looked like a little squidgy flying saucer, but that turned out to be a really good homemade chocolate and hazelnut marshmallow – what a concept! This was followed by the gorgeous sweet pastries, served on a black slate as opposed to a tiered stand.  Let’s see – working our way down from the top, here’s what was on offer: bright green absinthe Green Fairy macarons (textbook shape and texture and with a botanical whiff of absinthe, rather than an overwhelming flavour); a Pear Regent (a disc of shortbread topped with apple purée/jelly and finished off with a blackcurrant crème coated in a whisper of chocolate and gold leaf ); little choux buns filled with a lime cream; “Profile 66” chocolate citrus tartlets;  “Opéra 1865” banana cake layered with passion fruit cream; and a mini terracotta flower pot filled with apple purée and pistachio paste topped with a crumble. It was all good (even the banana opera cake!) but my favourite had to be those delightful pear regents!  We were also pleased to note that there was enough food for us each to have our own example of each dish – other afternoon teast I have enjoyed in London make you cut 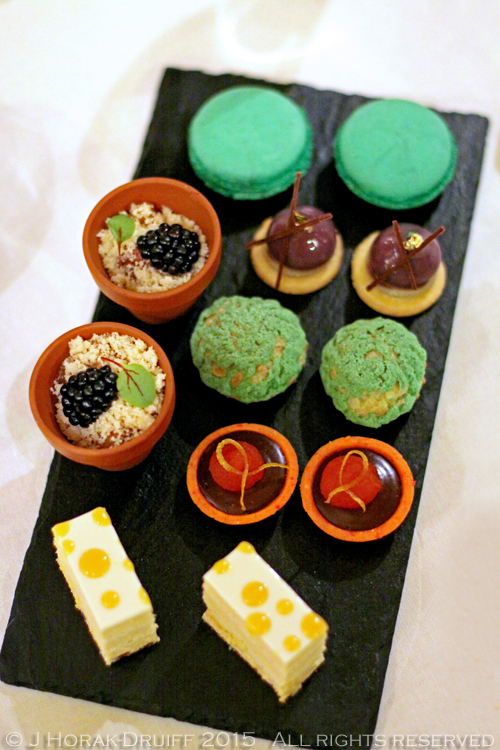 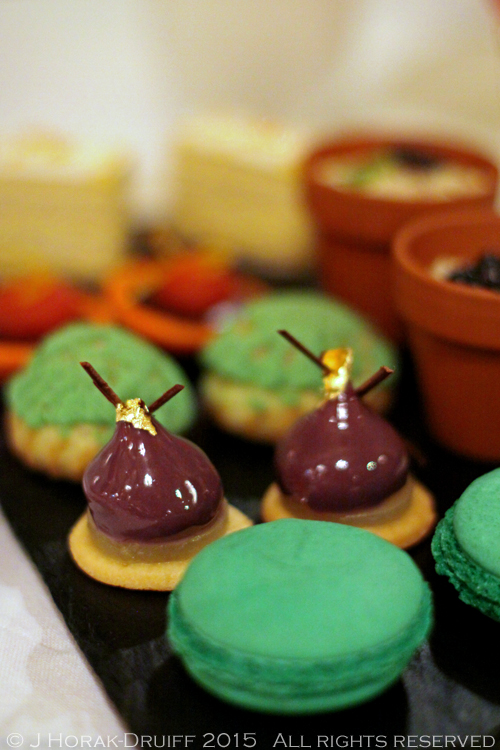 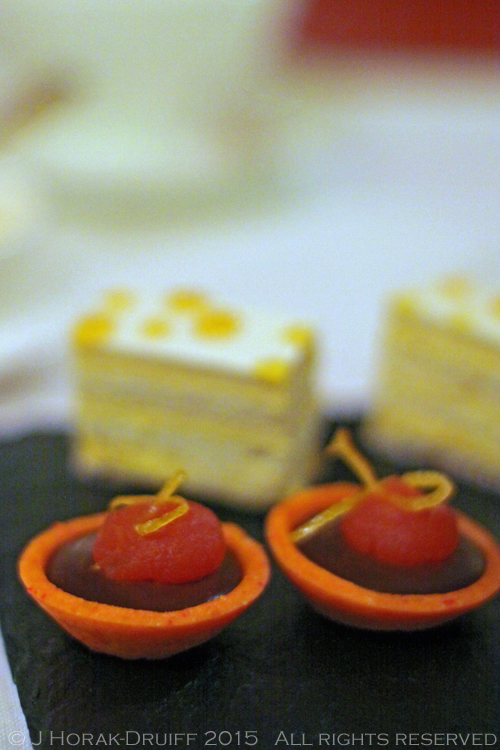 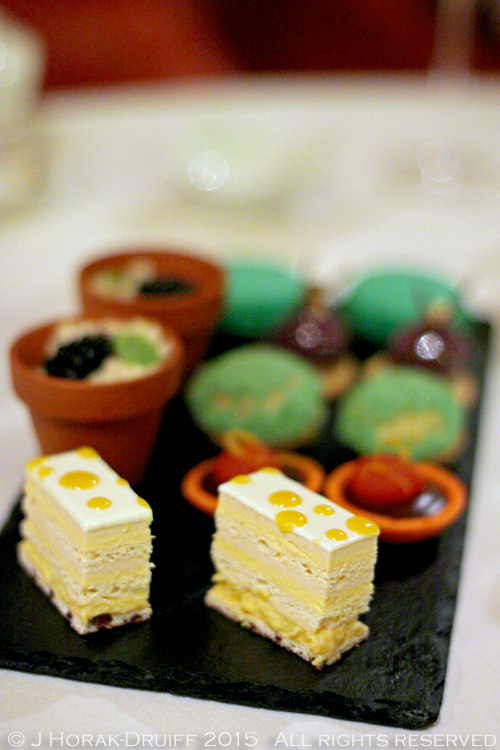 But – there’s more!  Once we had polished off the sweet pastries, we were served some plain and some traditional golden raisin scones with clotted cream, lemon curd and preserves.   Sometimes scones baked in bulk and left to stand until service can become dry and too crumbly, but these were perfection with a moist, warm crumb and a golden egg-glazed crust.  I enjoyed mine with my choice from the extensive tea menu:   Celestine Soft black China tea with sweet Madagascan vanilla pod and cornflowerse while Rosana had the unlikely sounding but truly delicious chocolate tea. We were also offered our choice of cakes from the cake counter (there are at least three a day and they are included in the price of the tea, if you can fit them in! There was even a gluten-free lemon drizzle cake on offer the day we visited, but neither of us could have squeezed in another morsel. There are also a couple of savoury snacks available at extra cost (think croque monsieur). 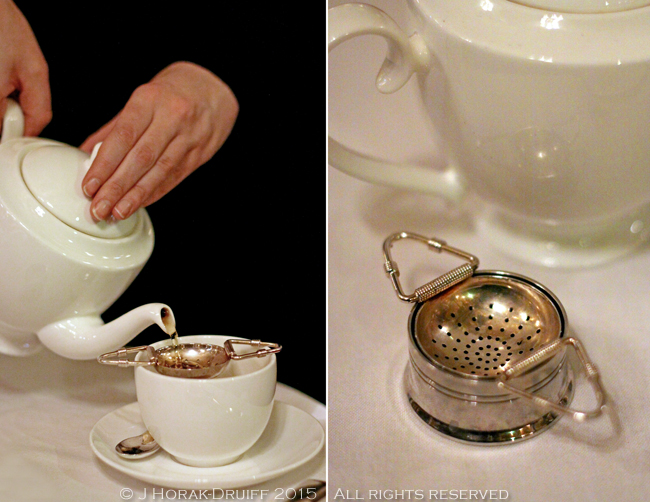 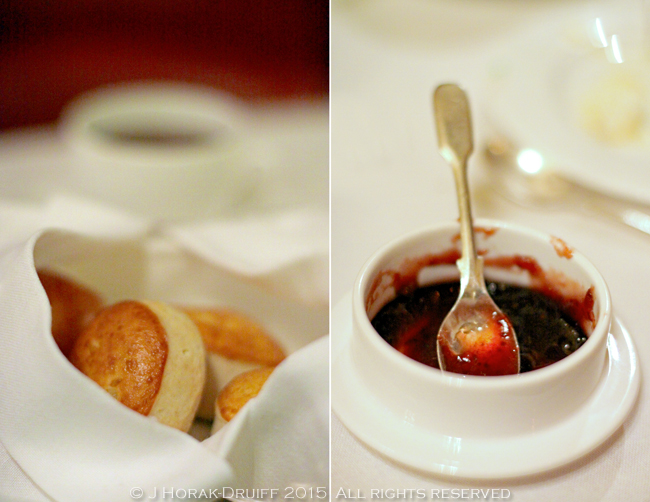 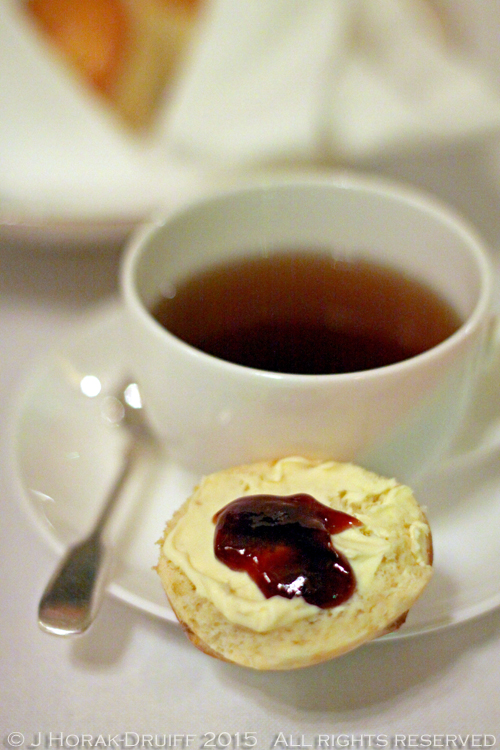 The other thing I truly loved about the Oscar Wilde Bar was the fact that they have a really wonderful pianist who plays gentle jazzy tunes while you enjoy your tea. The staff were also super-friendly and personable withoug ever being intrusive. These factors, together with the mesmerising room and the delicous food meant, that before we knew it we had been indulging in our high society tea for over two hours! It’s an incredibly indulgent way to while away a rainy afternoon – like a wormhole in the space-time continuum that takes you back into the London’s 19th century social scene just yards from bustling Regent Street. Afternoon tea without Champagne costs £42 per head; £55 with a glass of Veuve Cliquot; £65 with a glass of Veuve Cliquot Rosé; or £85 with a glass of Dom Perignon. Sittings for Afternoon Tea take place daily at 12pm, 2pm and 4pm.

The verdict? A deliciously louche way to enjoy one of London’s best afternoon teas in a historical setting – and afterwards you can head for the Green Bar elsewhere in the hotel where you can enjoy Absinthe or Absinthe cocktails from the beautiful Art Nouveau-style Absinthe fountain dispensers. For another perspective on the afternoon, have a look at Rosana’s post.

DISCLOSURE:  I enjoyed my afternoon tea as a guest of the Hotel Café Royal but received no further remuneration to write this post.  I retained full editorial control and all opinions are my own.