You are here: Home / Recipes / Breakfast & brunch / Swiss chard with chorizo and eggs: a one-pan wonder 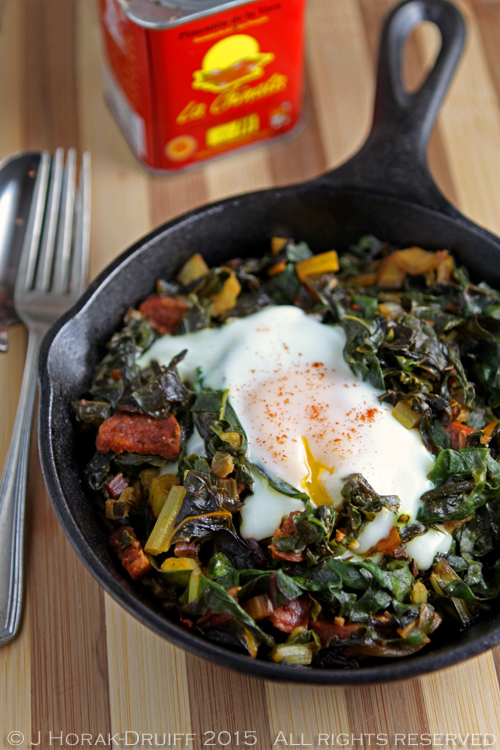 Anybody that knows me will know that I have a bit of a thing for pithy sayings that condense big ideas into small sentences.  When I went for the interview for my current job, I was interviewed by the managing partner and one of the colleagues with whom I still share an office. At some point in the interview, the partner fixed me with his beady eye and said: “If you had to sum up your life philosophy in one sentence, what would it be?”  It’s the kind of question that interviewees dread – suddenly not just your suitability for this job but for life on this planet is up for examination and judgement.  But after a second’s panic, the answer rose to my lips as effortlessly as an air bubble to the surface of a lake: “You catch more flies with honey than with vinegar”. I am still amazed that I came up with that at short notice, but it truly is one of my mantras, now as it was then, and one that has always served me well.

Another saying that I am particularly fond of is this one: “The best way to eat an elephant is one bite at a time.”  I think of it often – in fact, every time I am faced with a seemingly insurmountable task. Does walking 100 miles seem like a daunting task?  Do it one mile at a time.  Can’t face writing a book?  Just write one page a day, every day, for a year.  Want to declutter but feel you need a six month sabbatical to do it? Nonsense!  Just tidy one cupboard or drawer a week.  It’s all to easy to see an overwhelming task, become discouraged, and quit before you even attempt it.  I am sure I have spoken before of people who say they want to volunteer but get turned down for that project to spend a year in Belize building a school, and then give up. Instead, they could be volunteering at inner-city schools right here in London, mentoring kids who have no adult role models to get them started in their degree or their first job. Tasks or achievements don’t have to be huge to amount to something useful, but achieving something is always better than not even trying.

I was reminded again of this in a roundabout way recently when I came across the extraordinary story of a builder in California who had a couple of rescue cats who had to be confined indoors because of injury.  To ensure that they did not get bored, he started building them whimsical catwalks, tunnels, platforms, perches and sleeping nooks all over the house that were as aesthetically pleasing to the humans as they were fun for the cats.  And then he acquired a couple more rescue cats… and then he took in a few more… until he found himself with 15 rescue cats and a mild addiction to building them more kitty architectural features.  In an interview, he mentions how much he has spent on creating this ultimate cat paradise, but also how much joy it gives him, his housemates and the cats.  He also said something that struck a chord with me: “I can‘t solve the world’s problems, but I can take these cats and I can solve their problems.” 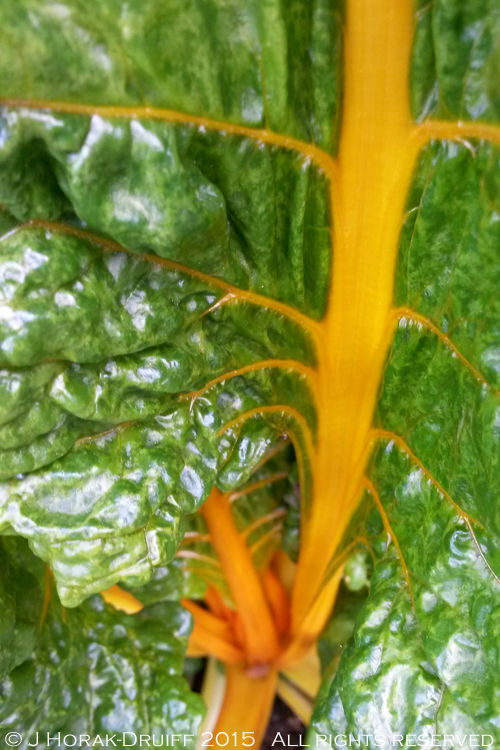 For some reason that sentence stayed with me for days.  I often get almightily depressed by the state of the world – war, hunger, disease and suffering increasingly seem to beset the most deprived parts of the world, exacerbating the suffering that people and animals are already enduring, and as an individual it is so easy to be overwhelmed.  As one person, I cannot end a war; I cannot eradicate a disease; I cannot save the rhino from extinction; and I cannot feed the starving millions. Even giving to charities that aim to solve these problems is fraught with difficulty:  how much of each pound I donate will actually fund the charity’s stated objectives, and how much will be spent on central London offices and TV adverts? But this builder from California whom I’ve never met reminded me that nothing in this paragraph represents a good reason to throw your hands up and do nothing. No, I can’t solve the world’s problems, and I can’t save the rhino, but I have already solved my two rescue cats’ problems – they will never want for food, shelter, healthcare or love in their lives. It is a tiny drop in the ocean of what needs doing in the world, but imagine a world where every one of us just aimed to solve one little problem for another living being every day.  As Louis Armstrong would say, what a wonderful world. 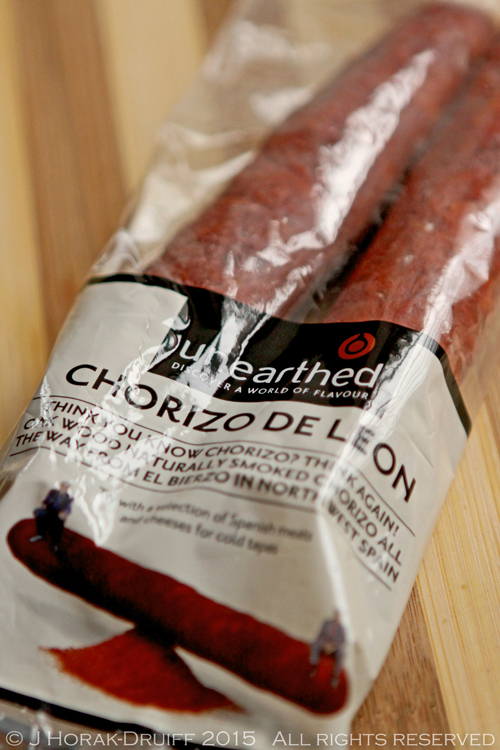 I can’t promise that this dish of Swiss chard with chorizo and eggs will solve the Middle East crisis, world hunger, or replenish the Sumatran tiger population – but I can tell you that it is delicious and it will help solve your bone problems. Swiss chard is an excellent source of vitamin K,  an often-overlooked micronutrient which is very good for bone health as it keeps calcium in your bone matrix, rather than allowing it to calcify your arteries. In fact,  studies have shown that vitamin K can not only increase bone mineral density in osteoporotic people but also reduce fracture rates (and of course, it helps to heal a broken femur!).  Our chard was the bright yellow-ribbed variety that Nick grew on the allotment – so totally organic and no food miles either. Eggs are a well-known  source of protein, but they are also an excellent source of the trace mineral Selenium, another under-the-radar micronutrient that you need for healthy bones (low levels of Selenium intake have been associated with osteopenia, a precursor of osteoporosis). And the chorizo?  Well, that’s just there for added deliciousness 😉 I used some excellent chorizo de Leon from Unearthed – a paprika-laced gluten- free cured Spanish pork sausage from the city of Leon that adds a deep and smoky flavour to anything that you cook with it – perfect for this one-pan wonder dish. 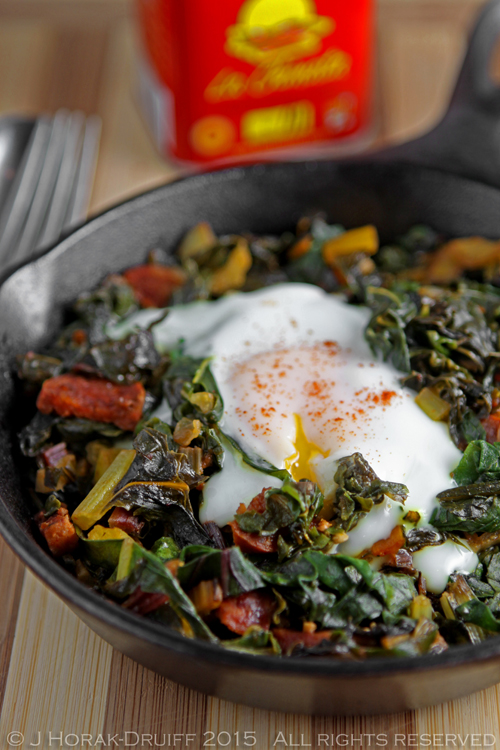 5.0 from 4 reviews
Swiss chard with chorizo and eggs: a one-pan wonder 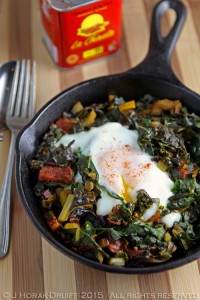