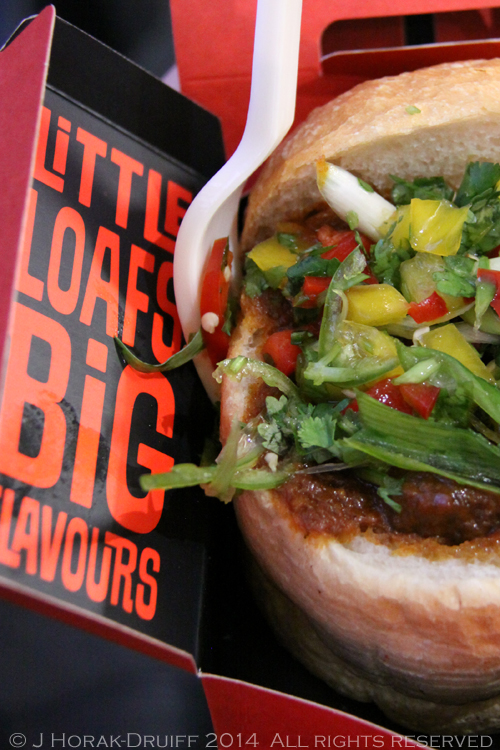 In 1998, researchers at Harvard and Kent State University in the US conducted a study to see how much pedestrians on campus actually noticed about their immediate surroundings.  During the experiment, an actor would approach a random pedestrian and ask for directions.  While the pedestrian was giving instructions, two more actors dressed as workmen would carry a large wooden door between the actor and the pedestrian, completely blocking their view of each other for a few seconds.  While the pedestrian’s view was blocked, the actor asking for directions was replaced by a different actor  – one with a different height, build, haircut, voice and wearing a different outfit. Astonishingly, about half of the participants did not notice the substitution at all and continued giving directions as if nothing untoward had happened – which goes to show that in familiar, everyday situations, we find it hard to notice things even when they happen right under our noses. This probably explains why it took an English bloke to recognise the brilliance of that most quintessential of South African dishes, the bunnychow, and to bring it to London.

The bunny chow is South Africa’s homegrown streetfood, consisting broadly of a curry ladled into a scooped-out half-loaf of bread. One theory is that it originated at a restaurant in Durban’s Grey Street when, in the early 1900s, caddies from the Royal Durban Golf Club were unable to get enough time off over lunch to dash to predominanty Indian Grey Street to pick up a curry for lunch.  The caddies would ask their friends to bring back curries for them and because there were no polystyrene containers back then, the shopkeepers sent the curry in hollowed out loaves of bread.  There was also no disposable cutlery, so the bread was useful as a tool to dip into the curry and use instead of a fork.  The shopkeepers on Grey Street were called banias (an Indian caste of merchants), and “bunny” could be a corruption of this – there certainly are no actual bunnies involved!  Another theory is that bunny chows originated as a means for the (mostly Indian) labourers to take lunch onto the sugar cane plantations of Kwa-Zulu Natal in the days before disposable containers. It’s delicious, homely, rib-sticking food but there’s no denying that it’s messy.  (Have a look at  my bunnychow recipe and you’ll see what I mean!) 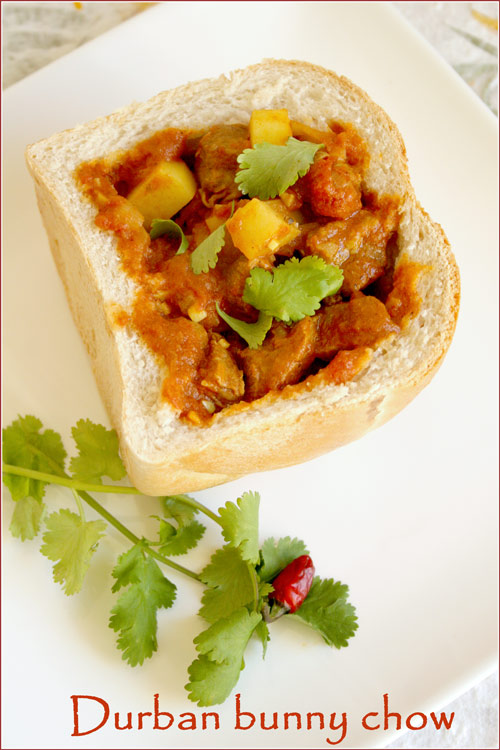 I had been hearing stories circulating for a while about a food truck popping up at various locations around London selling bunny chows.  Surely not??  I was intrigued – more so when I heard that they had acquired more permanent premises in BoxPark, and that the Brits who had tried them were raving about them.  But you could have knocked me down with a feather when I heard that an eponymous Bunnychow restaurant was to be opening its doors in the heart of Soho.  This I had to see – Soho hipsters getting to grips with massive bread bowls of messy curry! And I had the opportunity to go and see when the restaurant officially opened in September. The small but cosy premises on Wardour street were heaving on the night of the soft opening, and surprisingly, we were the only South Africans that I encountered, so clearly this was not aimed only at homesick Saffers. We met both the owner, Atholl Milton, and the marketing manager Salim Ahmed, both of whom were engaging, likeable and obviously very passionate about the brand.  Although he does not have any South African roots as such, Atholl loved the idea of the bunny chow, a unique and portable streetfood with a funky name and an interesting history, and he figured that after burgers and hot dogs, London was ready for the Next Big Thing. 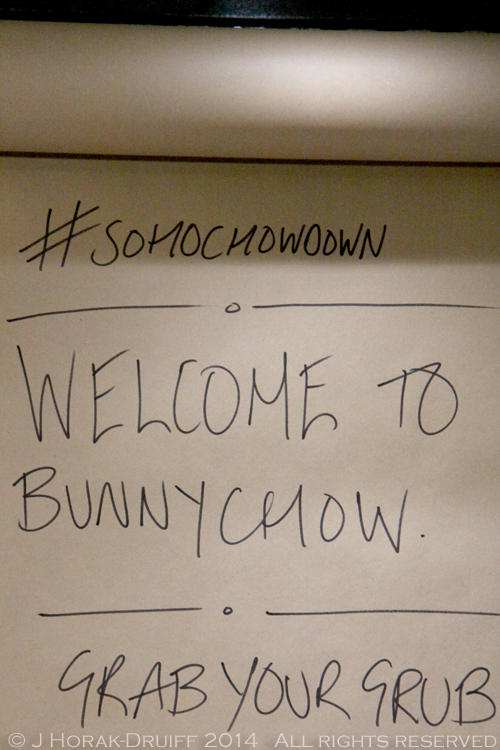 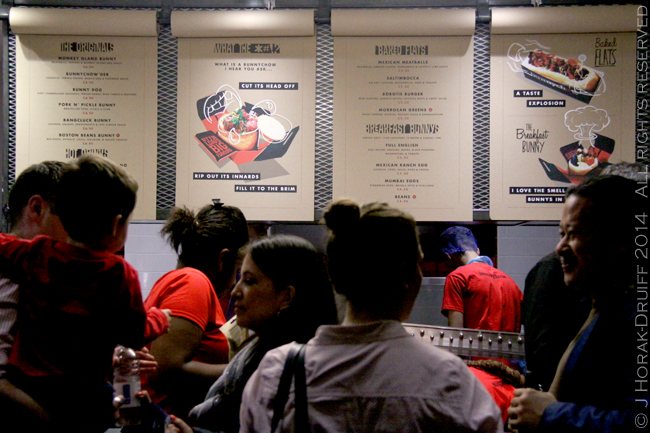 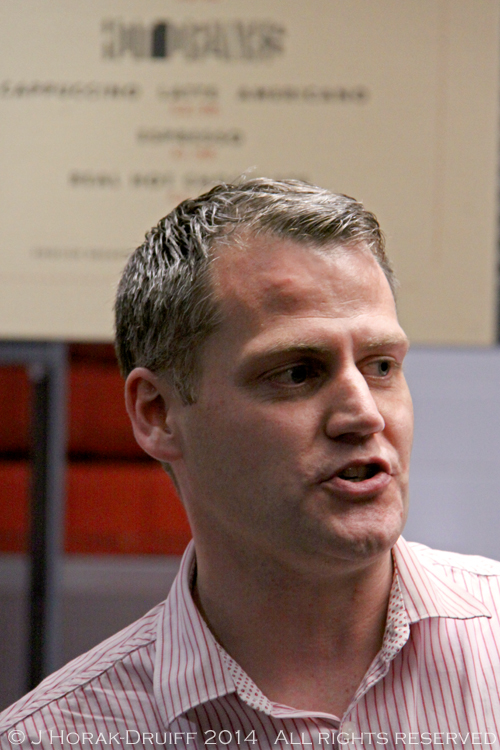 The menu is divided into bunnies, breakfast bunnies, flatbreads, salads, desserts/snacks and drinks, all of which were on offer on the night we visited. If you are one of those people who feel that only authentic cuisine is good enough, look away now. When I say that in Durban the bunny chows are served in a hollowed out loaf, I mean just that – a bog standard white supermarket loaf that has been halved and had the crumb scooped out. But at Bunnychow, the gorgeous round mini-breads are specially baked for the restaurant and are as pretty as they are tasty.  No self-respecting Durbanite would use cutlery to each a bunny – yet here you are provided with a fork to decrease the messiness factor. And whereas the variety of bunny chow fillings in South Africa is generally limited to  lamb, chicken, beef or vegetable curry, at Bunnychow you can choose from such delights as monkeygland meatballs; pulled pork and slaw; or maybe baked beans with spinach, chilli and smoked cheese. Is it traditional?  Not really. Is it fresh and delicious and packed with flavour?  Oh yes.

I decided to try the most South African option – the Monkeygland bunny (once again, no monkeys – this is the name for a sweet and spicy South African sauce) which consisted of  mini meatballs that had been cooked in an onion-garlic masala sweetened with mango chutney and then seasoned with toasted cumin, turmeric and red chillies.  The filling was topped with chopped spring onions, coriander leaves, bell peppers and chile peppers, all adding up to a meaty meal with a surprisingly spicy bite and the added bonus of the crisp, fresh topping.  Nick first tried the Pork & Pickle bunny (pulled pork, BBQ sauce, coleslaw and pickles) which was similarly packed with meaty goodness and excellent flavour. He then tried the Bunnychowder, a riff on the clam chowder bread bowls of New Englandm, filled with seafood chowder and topped with soft-boiled quail’s egg.  Although he deemed it pleasant, NIck was somewhat underwhelmed by this, both in terms of flavour and “sloppiness” (which is needed to soak into and flavour the bread). 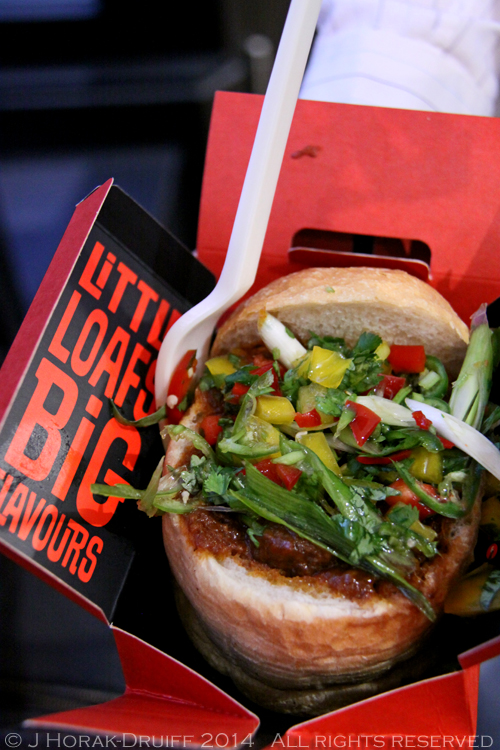 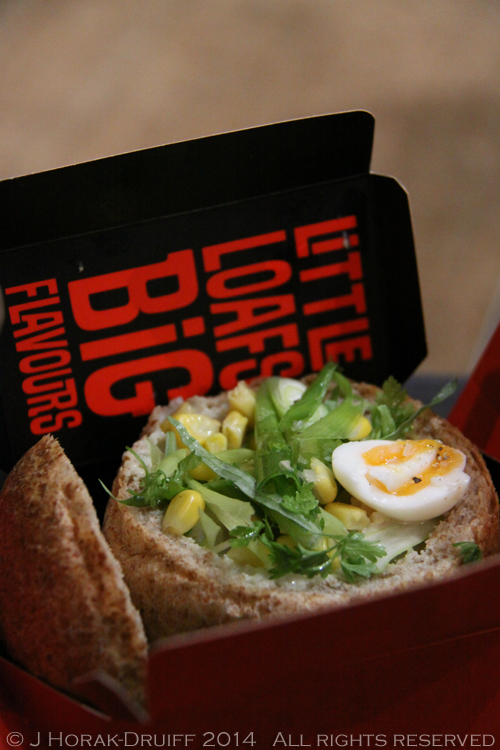 If you arrive at breakfast time, there is also a range of breakfast bunnies available, from the Full English (yes, you guessed: bacon, sausage, egg, black pudding, beans and mushrooms), to the Mexican huevos rancheros with egg, salsa, corn and chorizo.   For those with lighter appetites, there are “flatbreads”, which turned out to be more like a soft submarine roll with fillings like saltimbocca (chicken, mozzarella, sage, tomato sauce) or the bobotie burger (a bobotie-spiced burger with all the trimmings).  In addition, there are salads served in a taco shell to make them easily portable and a range of truly wonderful alcohol-free fruit cocktails made on site.  Nick tried the beetroot Bloody Mary (revelatory!) but there are also others to try including plum and mint; ginger spice; and cucumber moijito.  And then there are a range of sweet and savoury snacks, of which we sampled two, both of which carry through the theme of filled snacks.  The first was a play on the traditional Durban street snack of fresh pineapple on a stick, dipped in chilli powder, and consisted of an apple that had been partially hollowed out and filled with small pineapple chunks in a chilli sauce.  This was fresh, crunch, sweet and spicy – a real party of flavours and textures in your mouth.  The other one we tried was the “buffin” – the Bunnychow take on a filled muffin.  There are a couple of flavours, but I could not resist the chocolate and mint one which references the flavours of classic South African Peppermint Crisp pudding – a chocolate muffin filled with chocolate mint ganache with mint candy on top. 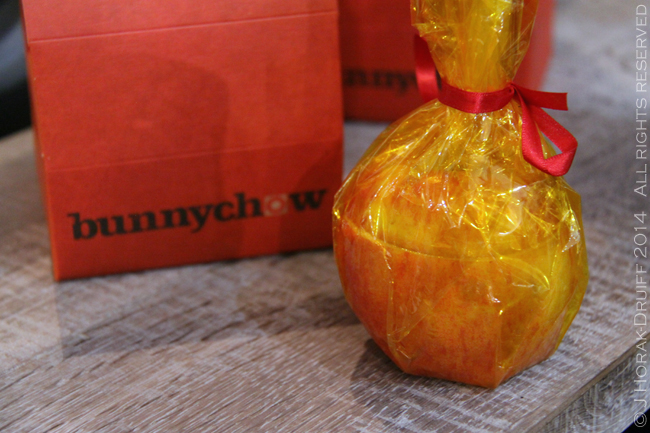 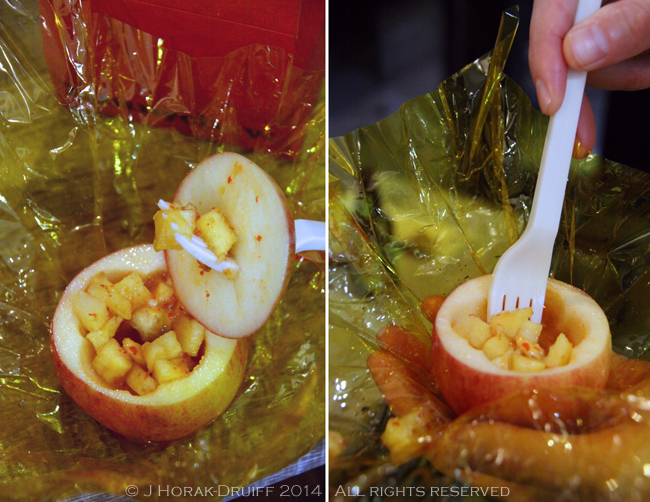 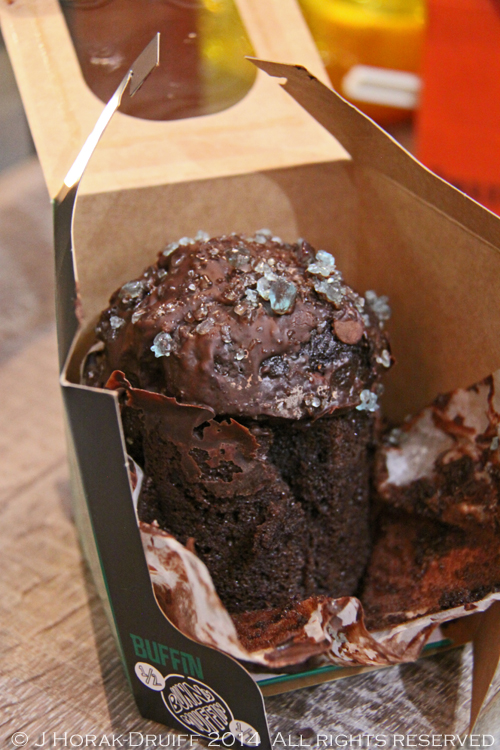 Looking around me that night, I saw loads of very happy people, excited about trying a new food, all dissecting their bunnies to see what surprises were hidden inside, and then messily eating them – with some even dipping the bread lid into the filling instead of the fork, South African style.  The staff were all knowledgeable and enthusiastic to a fault about the product, and although it is essentially a takeaway joint (maximum seating in the restaurant area is about 16!), the contrast in terms of experience and food quality between this and Big International Burger Chains was massive. I love their commitment to using excellent ingredients and making as much as possible fresh on-site, and it certainly pays dividends in terms of flavour and taste. If you have an event coming up, the original Bunnychow food truck is available to hire, or with 24 hours notice, you can even order bunnies to be delivered to your door (minimum order applies). I believe plans are to expand and open more Bunnychow outlets – so keep an eye out.  South African street food could soon be hitting your street – and at about £8 per bunny, it’s a lot cheaper than flights to Durban!

DISCLOSURE: I enjoyed this meal as a guest of Bunnychow but received no further remuneration to write this post.  I was not required to write a positive review and all opinions expressed are my own.