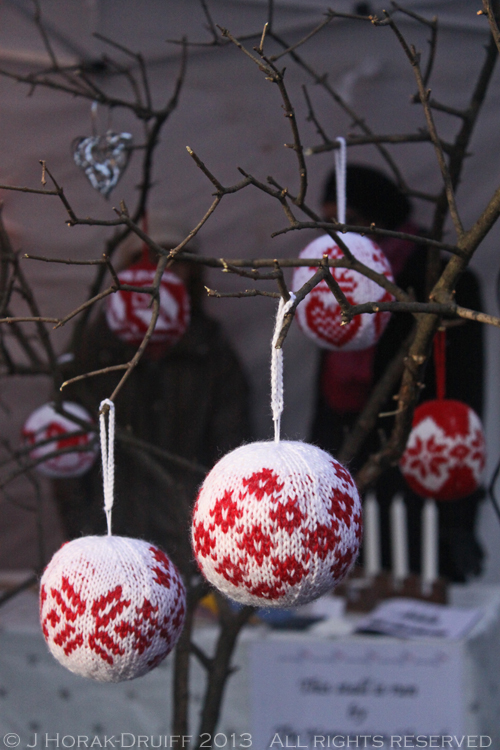 People often ask me what Christmas traditions are like in South Africa – after all, we do have Christmas in midsummer rather than midwinter so you’d think that we might have come up with some radically different southern hemisphere Christmas traditions, right?  Wrong! Christmas in sunny South Africa looks almost precisely like Christmas in the Europe: pine trees decorated with sparkly baubles; Santa Clauses dressed up in scratchy red suits, looking as if they might melt at any moment; mistletoe ornaments; and even fake “snow” and snowflake motifs painted on sunny shop windows. The longer I think about it, the more ridiculous it seems! If, on the other hand, you really want to see Christmas in its natural environment, get thee to the Nordic countries!  These must surely be the ultimate Christmas countries – the font from which all other Christmases sprang: they are covered in type of pine trees on which we model our traditional Christmas trees; they are full of indigenous reindeer; and there is no shortage of snow.

It should have come as no surprise, then, to find that all the Nordic countries take Christmas rather seriously.  Even here in London, the Scandinavian communities preserve their traditional Christmas cultures and foods in Scandi Christmas markets that take place on a single weekend in late November.   The Swedish and Danish Christmas markets are centred around the Swedish church and the Danish YMCA in Marylebone and Finchley respectively which is the other end of London for me.  But the Norwegian and Finnish markets take place in and around the Norwegian and Finnish churches in Rotherhithe – practically on my doorstep!  The person who had first alerted me to the Scandi Christmas markets in London was the lovely Su-Lin, so it seemed only fitting that I met up with her one crisp, sunny Saturday last month to explore them.

There has been a Norwegian church in London since the late 17th century and the current Norwegian church, also known as St Olav’s Church, is situated near the Thames right next to the northern entrance to the Rotherhithe tunnel.  It was built in 1926 and is part of The Norwegian Seamen’s Churches, a religious organisation originally founded to secure the religious education of Scandinavian seafarers but now serving all Norwegians and and other Scandinavians travelling abroad.  The church is also called the seaferer’s church and its maritime history is evident in the gilded ship which serves as a weather  vane.  Just inside the front door there is also a statue t St Olav – and beyond that (on the day we visited anyway!) was a bustling Christmas fair full of beautiful traditional wooden ornaments, knitted goods, lace and a whole lot of fantastic food from cookies to tins of Norwegian fishballs to tins of reindeer paté.  We were seduced by the lure of loaves of beautiful wholegrain bread and bottles of pickled herring, both of which are made each year by the ladies of the church congregation. In the main space of the church, a bustling café had been set up, staffed by Norwegian ladies in traditional dresses.  On offer were a selection of open-face sandwiches and some delectable cakes which we could not resist.  Between us we had the smoked salmon; the pickled herring and beetroot; and the meatball sandwiches, and then we did an earl fika with bottomless coffee and apple cake. 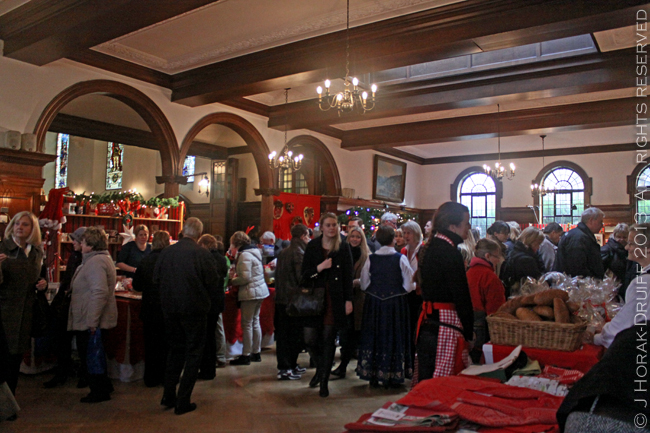 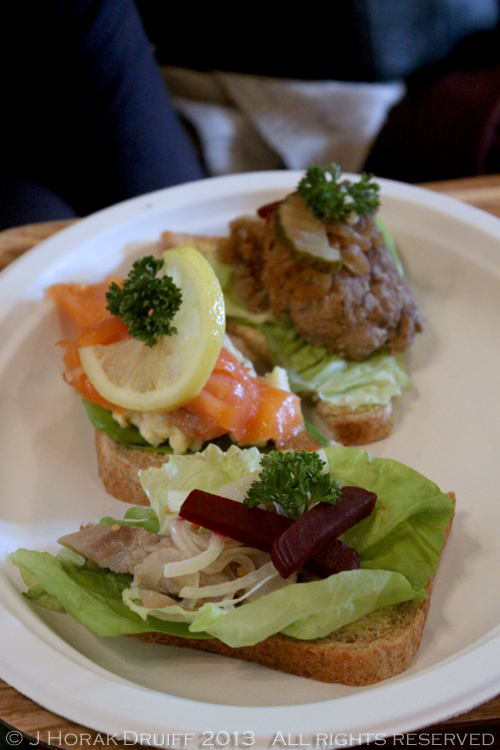 Fortified sufficiently, we stepped outside into Albion Street which was lined with Christmas stalls as far as the eye could see.  Whatever you might need for a Scandi Christmas could be found there, from beautiful more traditional Christmas decorations and adorable tomtes;  to funky Cath Kidson-esque angels; to my gift idea of the day – colourful, funky and stylish thick felt trivets for your Christmas table by Verso Design. 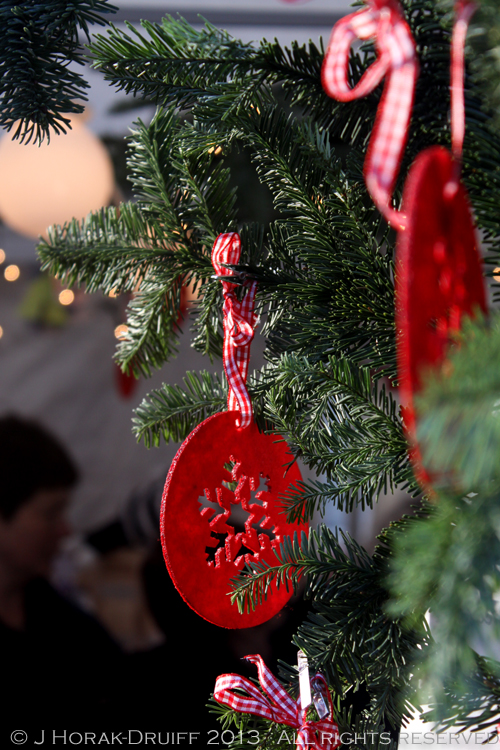 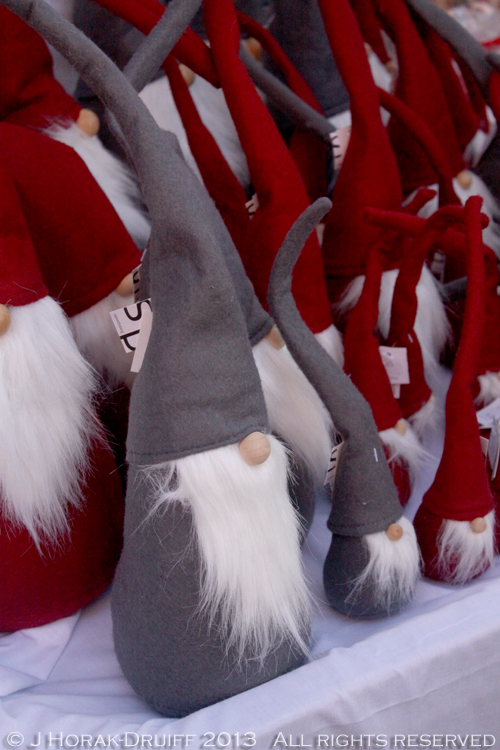 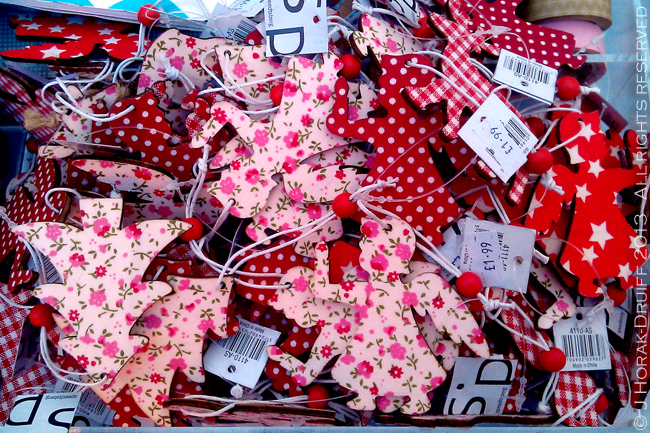 And of course, let’s not forget the food!  Swedish bakery Bageriet was there, with a table heaving under the weight of Lussekatter (saffron buns) and Klenäter – deep-fried pastry twists dusted in cinnamon sugar that rather reminded me of a Swedish take on koeksisters!   For the more traditionally-minded, there were gorgeous muffins and for the more adventurous there was a steaming pot of reindeer stew – although we were told by one of the sellers that they sometimes have to describe it as “Arctic venison” in the UK to avoid upsetting youngsters who think we are eating Santa’s main form of transport!  There was an entire stall devoted to the foods of Estonia, a country that I often forget sits so far north as to be culturally part of Scandinavia – the highlight for me was the coffee laced with warmingVana Tallinn, a rum-based liqueur with Christmassy spices. Despite having just eaten at the Norwegian church, Su-Lin and ai could not resist some of the treats on sale, including a Swedish hot dog served in a traditional flatbread rather than a roll, loaded with ALL the toppings (including crispy onions!); a shared mug of astonnoshingly good Norwegian fish chowder; and a fresh, crispy waffle with fruit jam. 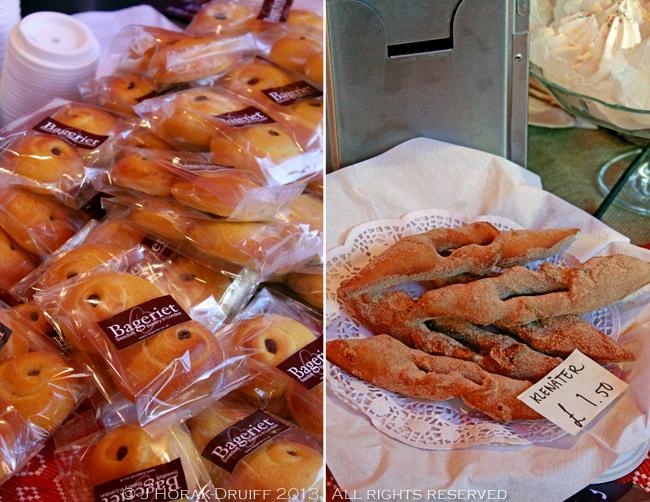 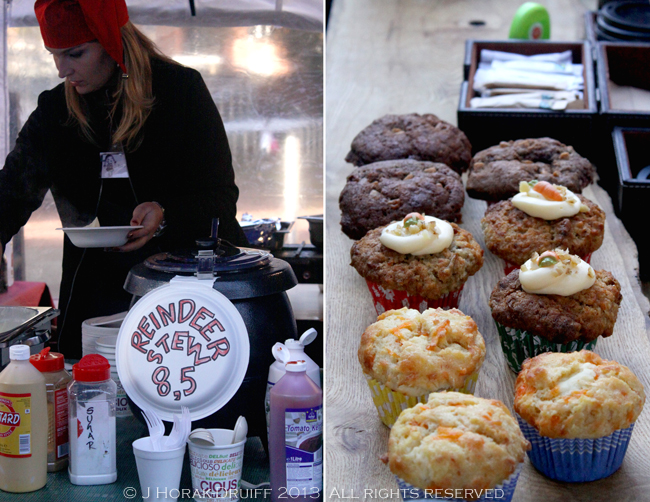 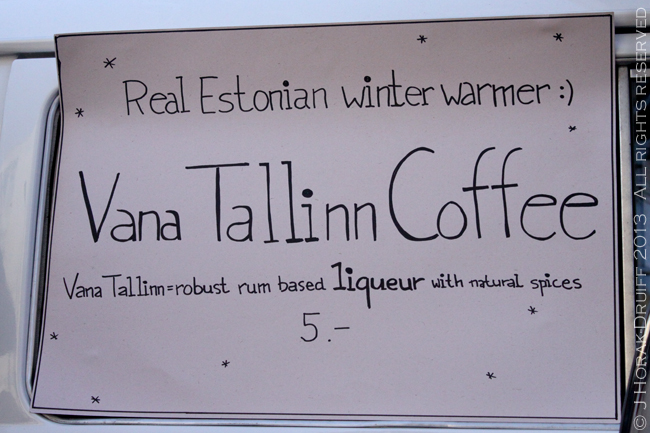 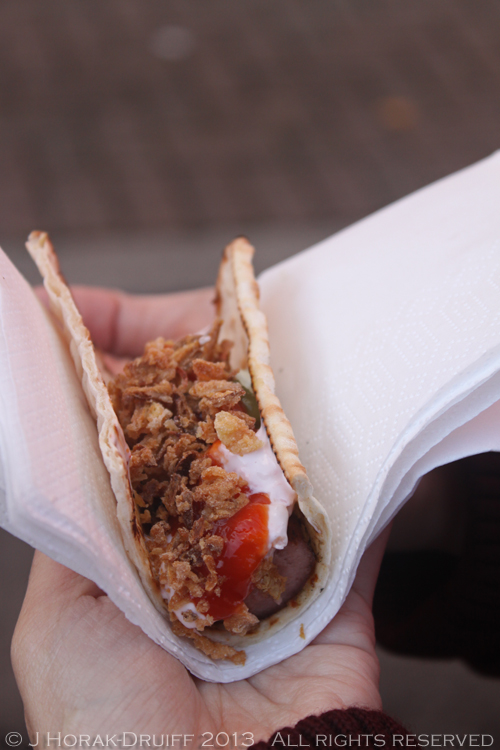 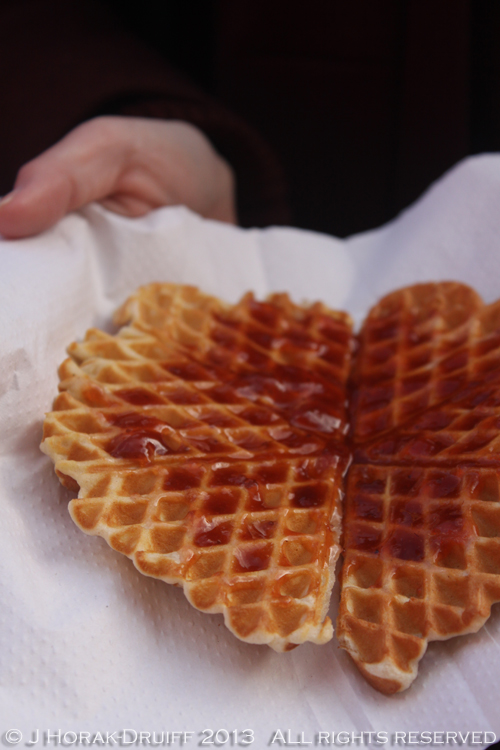 At the opposite end of Albion Street, and at the opposite end of the architectural spectrum,  from the Norwegian church is the Finnish Church, a modern Grade II listed building opened in 1958.  As we were told while waiting to get in, the building also houses a shop selling Finnish products, a hostel, and a traditional Finnish sauna open to the public Tuesday to Sunday.  Inside the church, we found a bustling bazaar full of all manner of interesting Finnish foods for sale and a group of carol singers, singing familiar carols in Finnish.  Upstairs was a café serving all manner of Finnish treats – would have been rude not to try some, right?? 😉 We tried the Karelian pie, an unlikely-sounding delicacy consisting of  a thin rye or buckwheat crust with a filling of rice, spread with a mix of hard-boiled egg and butter before serving. Its not nearly as heavy as you might think. and the egg butter is  surprisingly delicious. To finish (hah!) we had two pastries – a Finnish Korvapuusti (cinnamon roll) and a  Joulutortiu – a star-shaped puff pastry with a plum jam filling. 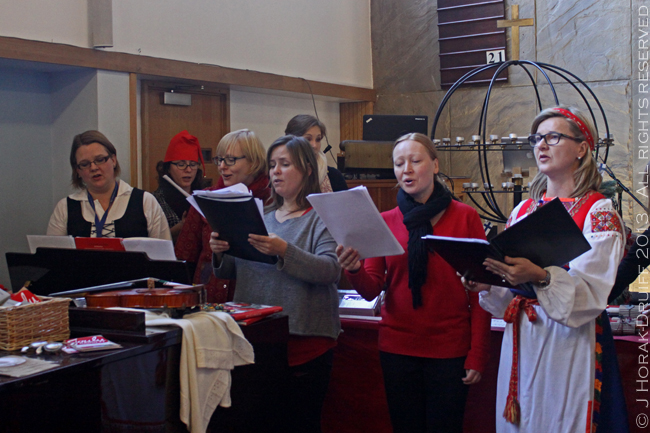 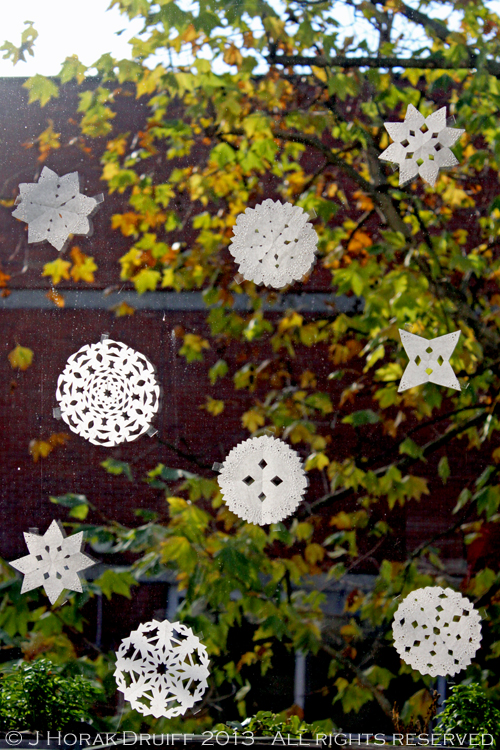 And with that, we had reached the end of the street – and our capacity for food!  On the way back to the station, we caught a few tunes by the excellent South London Jazz Orchestra playing in the market, and the following day I feasted on Norwegian pickled herring and the best bread I’ve tasted in a while, served with beetroot grown by Nick – and of course a heavenly Lussekatter for fika. 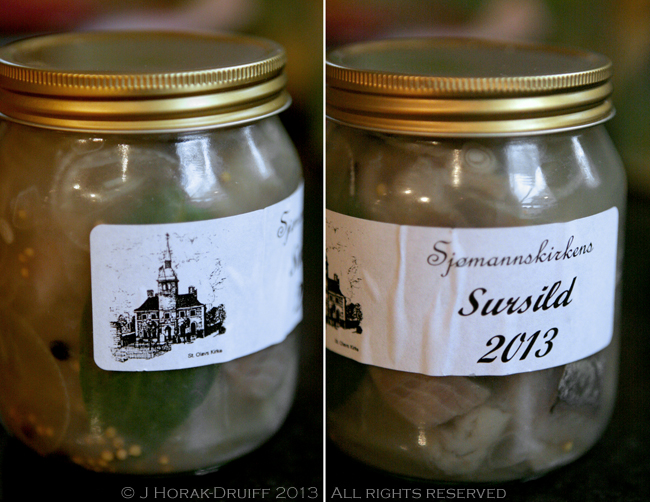 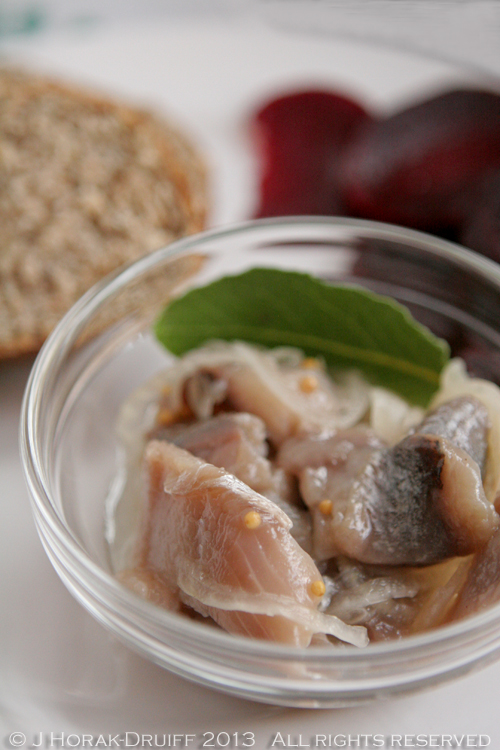 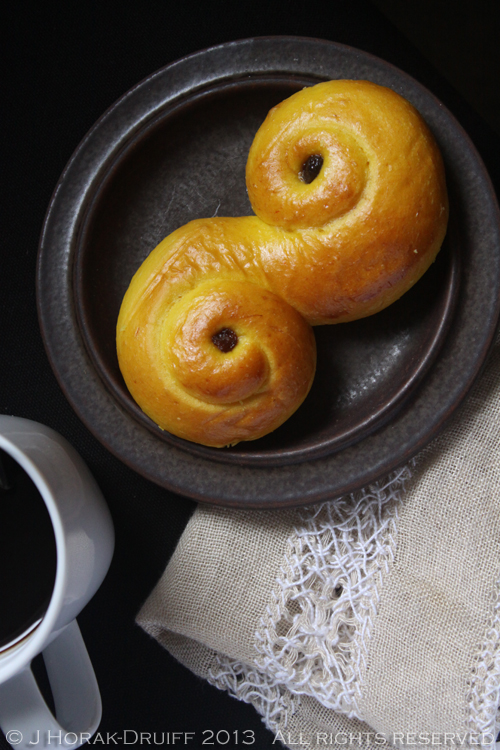 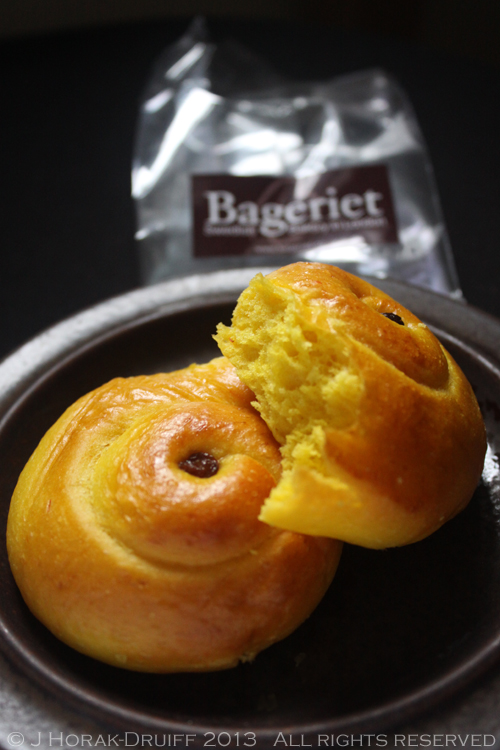 The markets take place only one weekend per year, usually in late November – details of the 2014 dates will be released on their website in due course.  To do justice to all the markets, I would suggest doing the Noregian and Finnish markets on one day; and the Swedish and Danish on the other – click here for Su-Lin’s write-up of the 2013 Danish Christmas market; or here for her write-up of all four markets in 2012.