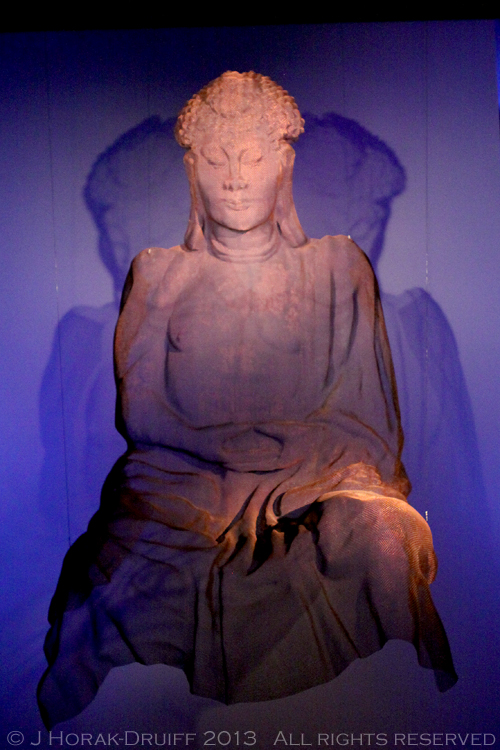 It’s a brave man that opens a bar named after a major world religious figure – but that is exactly what the late Raymon Visan did in 1996 when he opened the first Buddha-Bar. It was not Visan’s first foray into the world of wining and dining – he had previously opened Barfly in Paris together with a business partner, but it was with the opening of the first Buddha-Bar in Paris in 1996 that Visan struck gold. The concept was to serve exotic cocktails and an upmarket pan-Asian menu in übercool surroundings, presided over by a giant statue of the Buddha. It is a concept that became and instant hit with celebrities and translated spectacularly well – today it is a booming international franchise with bars in Paris, Mexico, Monte Carlo, Prague, Budapest, Kiev, St Petersburg, Moscow, Tbilsi, Dubai, New Delhi and the Philippines.  The original Buddha Bar London with it 18-foot Buddha statue opened on the Embankment back in 2008, literally weeks before Lehman Brothers collapsed and the financial crisis started. A victim of bad timing, it closed its doors a mere 18 months later but has recently relaunched in a new location in Knightsbridge and, hopefully, in a more promising financial climate.

When I was invited to dine there, I have to admit that I had my reservations.  Anything described as a celebrity favourite is usually the kind of place I avoid like the plague. Surely it’s a byword for style over substance?  But nevertheless, I suspended by disbelief and arrived for dinner with an open mind and an empty stomach.  There is something appealingly retro about the studied loucheness of the interior – low lighting, lots of blue and red lights and lots of shiny glass,  brass and lacquered fittings.  Upstairs  at street level is the bar area (with a large print of Ewan McGregor taken from Trainspotting) and bar dining area where we ate.  In the basement restaurant area there is seating for 240 guests and the pan-Asian decor continues with the obligatory giant wireframe Buddah statue and the interesting shadows it casts forming a focal point.  Even more impressively, on the stairs between the two floors there is a suspended 3D blue dragon made entirely from crystal beads suspended on wires – ambitious and mesmerising! The menu remains pan-Asian and the music (compiled by the group’s in-house DJ) is an eclectic mix of electro-ethnic and chill-out. 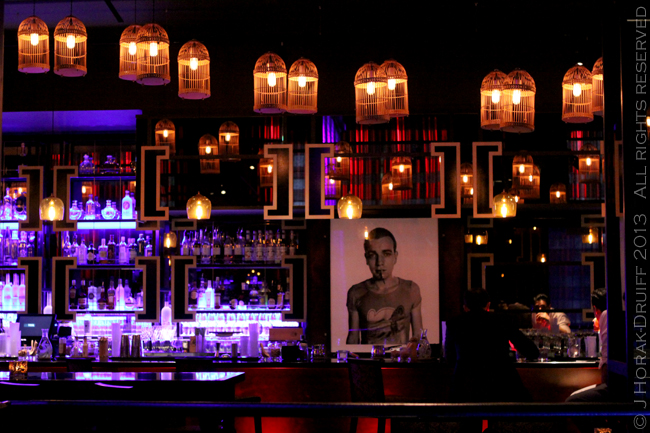 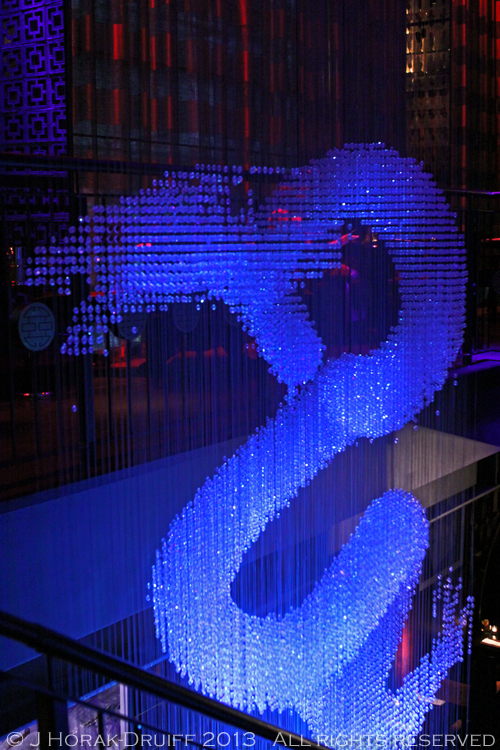 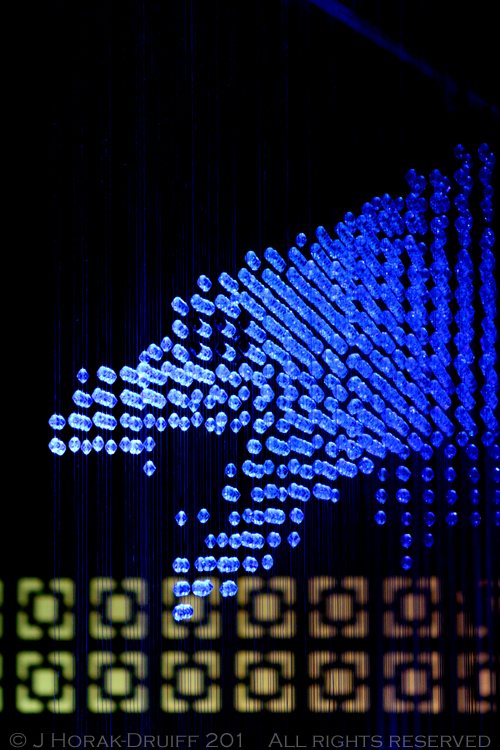 We placed our trust in our charming waiter when ordering cocktails and he returned with his two recommendations for us – which I cunningly forgot to take down the name and now cannot find them on the menu.  One was a whisky cocktail which came served in a bottle filled with smoke – a neat trick that also emphasises the smoke, peaty elements in the drink but in retrospect this is would have been better as a post-prandial drink.  I believe mine may have been the So Be @ Miami with fresh mint, grapefruit, vanilla sugar and tea infused gin – in any event, it was perfectly balanced, refreshing and lovely. 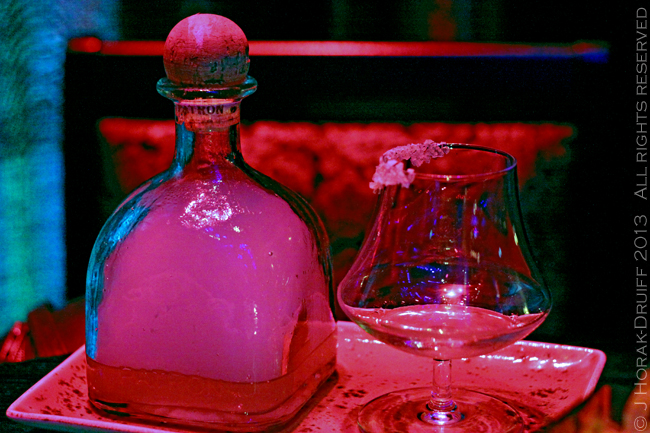 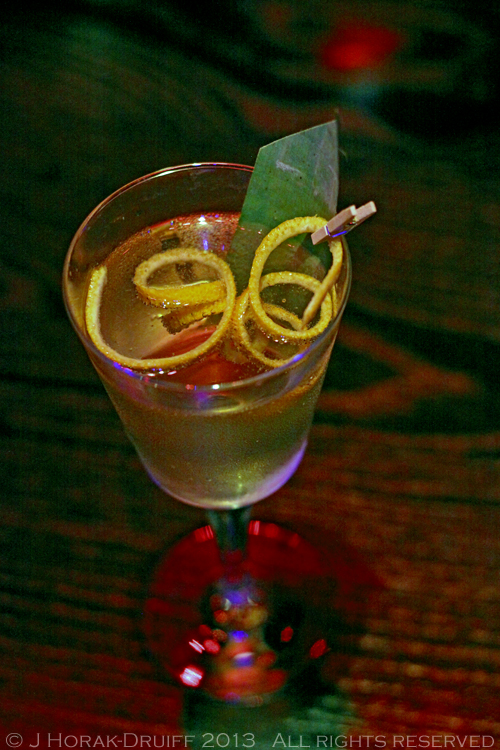 For dinner we decided to try out the restaurant’s new lunch and pre theatre concept dining of bento boxes which should enable guests in a hurry to be in and out of the restaurant within a mere 40 minutes, without compromising on the quality of their food – all for a rather reasonable £27. Each bento is served with miso soup, wakame salad and a choice of steamed rice or Buddha-Bar noodles (which I chose) and guests choose a starter and a main portion to add to that.  As my starter, I chose the tempura prawns with the wok-fried beef as a main course portion.  Other starter options include the green papaya salad, Buddha-Bar chicken salad, Buddha-Bar London duck salad, asparagus & nasu, or a choice of sushi rolls. Other main course options include five-spiced barbecued chicken, salmon miso, prawn pad Thai or tofu pad Thai.  The tempura prawns were delightful – three fat, juicy prawns in featherlight crispy batter with no hint of greasiness.  The wok-fried beef was a generous portion of aromatic beef and plenty of crunchy vegetables – both successful choices.  Guests enjoying the bento menu can also choose to add on dishes from the normal a la carte menu (at an extra charge) and we chose to try the roasted black cod with lemongrass miso (£28)  This was a fantastic incarnation of the dish first popularised by Nobu – moist creamy flakes of fish yielding at the touch of a fork, coated in an umami-rich glaze that had caramelised at the edges of the fish – just sublime, and nicely offset by the tang of the lemongrass miso. 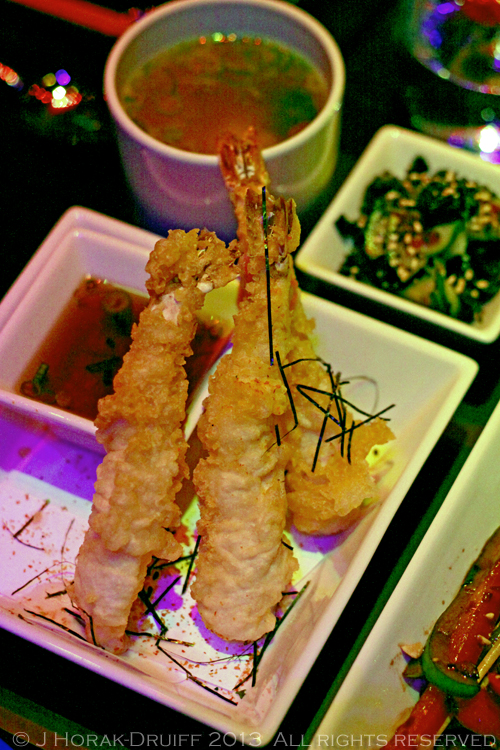 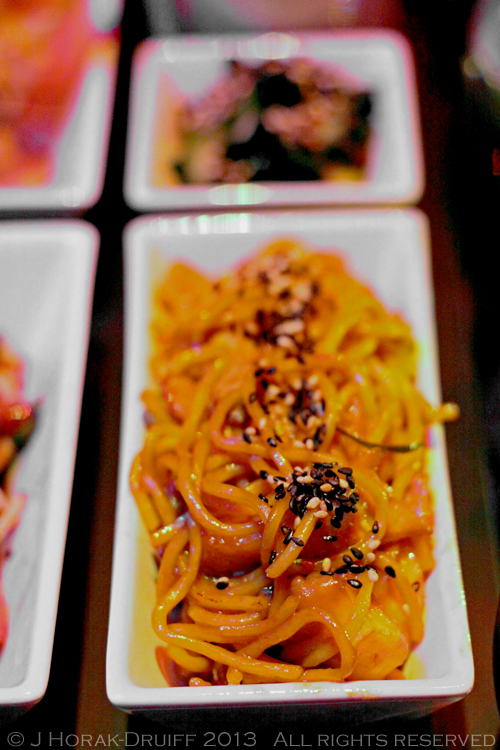 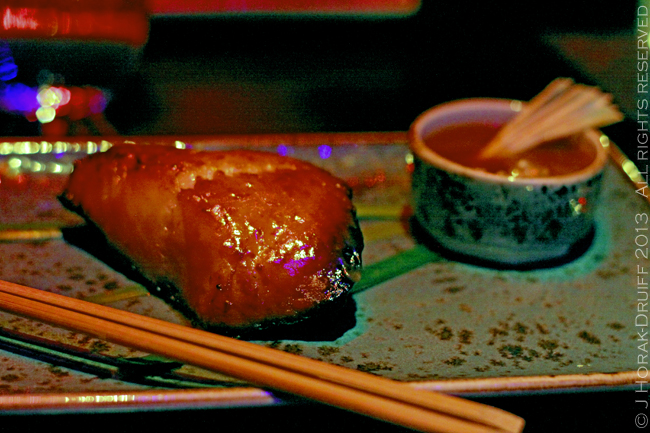 As we had no reason to be in and out of the restaurant in 40 minutes, we decided to linger over desserts:  my friend had the lime and ginger cheesecake with pineapple salsa (£7.50) while I chose the chocolate caramel and salted sesame bar  with vanilla ice-cream (£8.50).  The cheesecake was perfectly proportioned – enough to satisfy but not overwhelm, with a deliciously creamy texture that was well balanced by the hints of lime and tangy pineapple salsa.   But I was totally smitten with my chocolate caramel sesame bar, two finger-sized slices of a layered confection which included creamy caramel, rich chocolate cake and mousse and an addictively crunchy topping of black and white sesame seed caramel – once again beautifully balanced flavours and intriguing textures. 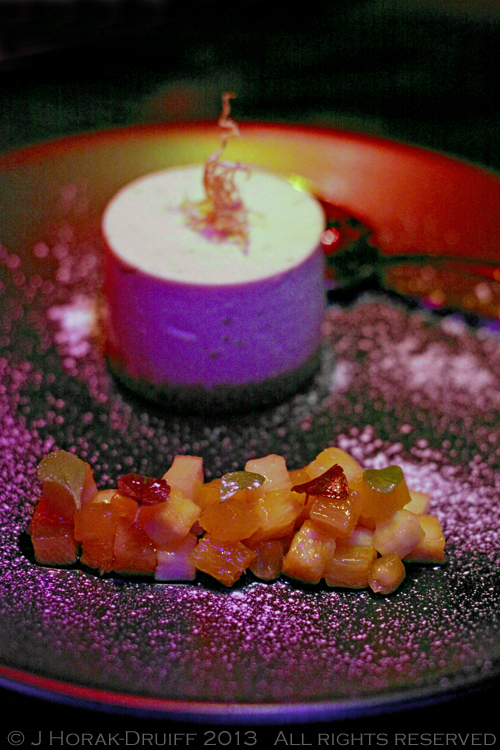 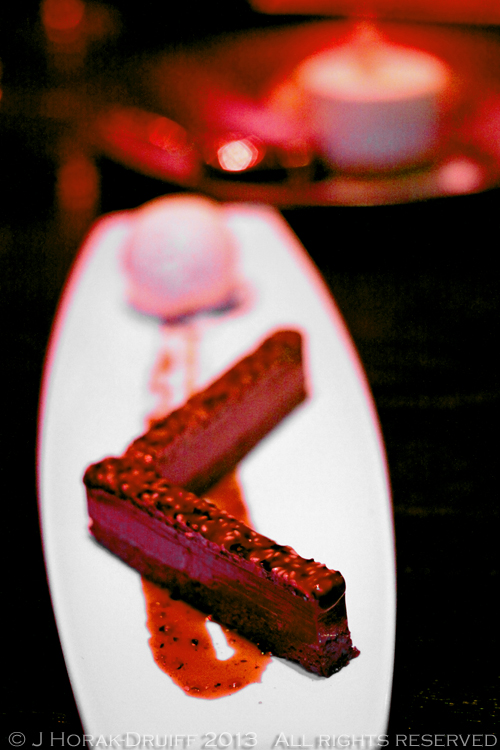 By the end of the meal, I was certainly pleased that I had suspended my disbelief – celebrity hangout it may be, but the kitchens at Buddha-Bar London certainly know what they are doing. Flavours were clean, presentation was attractive, and the black cod rivals Nobu’s in quality. Cocktails were innovative and staff were warm, friendly and seemed genuinely knowledgeable and enthusiastic about the menu. Because of the add-ons, our meal would have cost approximately £60 each, but if you restricted yourself to the bento and a cocktail it’s quite possible to enjoy a meal for about £40 – which is not bad value considering the quality of the food and the fact that you are a stone’s throw away from Harrods.

DISCLOSURE:  I enjoyed this meal as a guest of Buddha-Bar London but received no further remuneration to write this post and all opinions are my own.