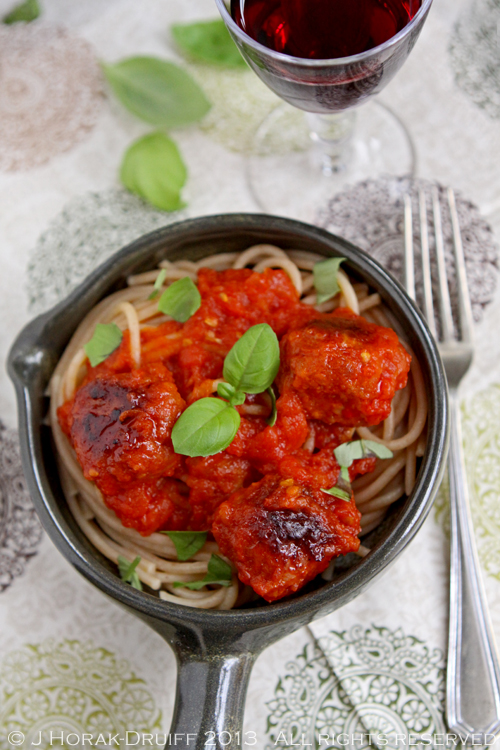 There are those people who say that you shouldn’t mess with classics. People who start hyperventilating with indignation when you suggest putting anything on a pizza other than the ingredients that a nonna would have had at her disposal in 18th century Napoli.  People who write angry letters to the local paper when their classic Caesar salad is adulterated with a topping of bacon or chicken or salmon. People who fear for the downfall of Western civilisation because somebody added Guinness to a stew and still tried to call it a traditional Irish stew.

I am not one of these people.

In the words of Air Supply, I say know what the rules are, and know how to break them. So, for example, I have no problem with trying a savoury caprese bread and butter pudding; or a savoury tarte tatin.  If it tastes good, try it and let the critics be damned – tradition is one thing but the authenticity police is another entirely. Along the same lines, I am also a huge fan of people taking traditionally humble food and glamming them up a little – not every time, but once in a while can’t hurt.  Maybe a chunk or two of lobster in your mac ‘n cheese; how about a little truffle butter in your mashed potatoes; or maybe a posh hamburger with wagyu beef and a slice of foie gras? Count me in! And when I was growing up, it didn’t come much humbler than spaghetti and meatballs, mainly because it was a dish that my dad used to serve when my mom was out and he was on childcare duty.  And when I say serve, of course I mean he opened a tin, heated the contents and put it in our plates. Nothing says humble quite like tinned spaghetti and mystery “meat”balls.

As a result, spaghetti and meatballs is not something you will often come across on the dinner menu at Cooksister HQ. But realising that I shouldn’t let my unfortunate childhood experiences get in the way of my culinary enjoyment, I recently decided that it was high time for a celebrity makeover of this dish.  The seed of an idea was planted when I was sent a couple of products from the new Unearthed “Autumn Bay” range to try out. Unearthed is a company started by three friends in 2008 to share with the world their favourite regional food finds and artisanal products.  The full Autumn Bay range  contains 48 different lines ranging from Special Reserve meats, seafood dishes, continental meats, chorizo meatballs, dips, olives and pate. All products are on 2 for £5 promotion at Waitrose stores,  including Special Reserve Jamon Iberico (£3.99), Sicilian Nocellara olives (£3.49) and chorizo mini meatballs (£3.29) which they sent me to try. 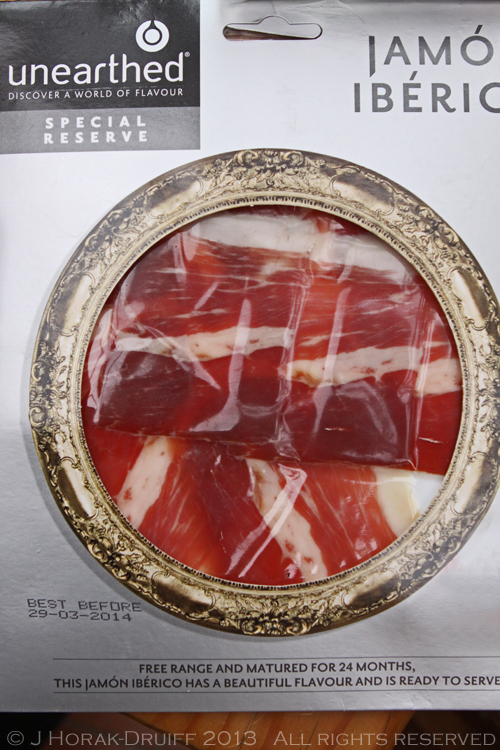 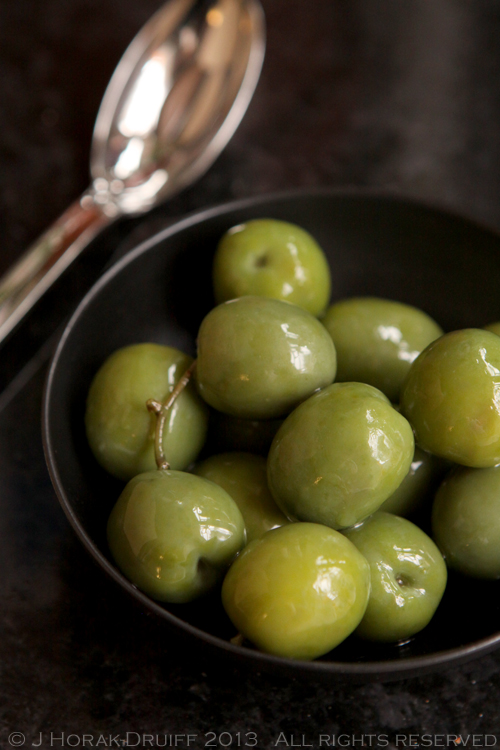 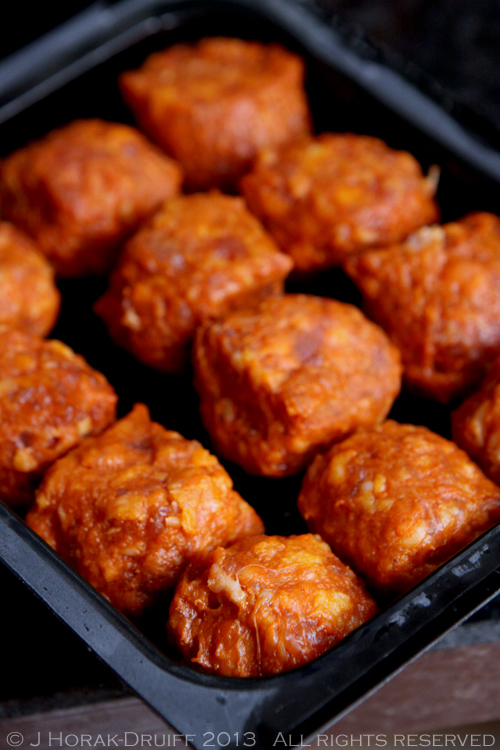 The ham is silky, nutty, wafer thin and perfectly marbled with fat – a real indulgence on its own or with good sourdough bread, olive oil and a glass of cava.  The olives were large and plump with the most marvellous emerald green colour and a mild, buttery flavour that I adored.  If you sometimes find olives too stridently acidic, these are the olives for you! I spent some time debating what to do with the meatballs.  Obviously, frying them and eating them hot out of the pan on toothpicks while nobody was looking was an option (!) but not a very sociable one.  And then I remembered Nick’s Super Simple Tomato Sauce. As I mentioned before, we had to harvest our tomatoes in a hurry and some had to be processed while still green.  But a surprising number did in fact reach red ripeness – you just need to put them in a dry cardboard box in a warm place for a few days and voila – crimson glory! But of course, the problem is that masses ripen at once and soon we were looking for ways to use up a lot of ripe tomatoes and fast. This is the single easiest tomato sauce you will ever make – it’s literally chopped skinned tomatoes simmered for 2 hours with a coupe of teaspoons of sugar and that’s it.  No added ingredients, just a thick reduced paste of intense tomato flavour that is completely addictive and will cure you of bland supermarket tinned tomatoes for ever. 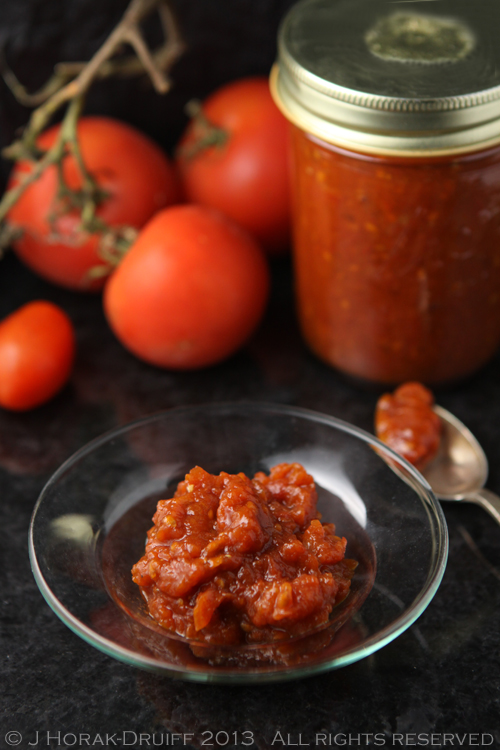 The best part of this super simple, umami-rich sauce is that you can bottle it and keep it on tap for use throughout the cooler months – bottling/canning is far simpler than you’d think and is explained fully in the recipe below. Please note that there are no exact quantities for the sauce – you just simmer as many tomatoes as you want or have, eat what you need and bottle the rest. The quantities I have suggested below should yield enough sauce for this dish plus enough to fill a 250ml bottle for later use. The meatballs were nothing short of heavenly – dense and meaty and not inclined to fall apart during frying, they were full of deep spicy, smoky chorizo flavour and made a fantastic foil for the rich sweet tomato sauce. The entire dish made a quick and indulgent lunch on a blustery, rainy Saturday afternoon, but it’s smart enough to serve to guests too. DISCLOSURE: The chorizo meatballs, olives and ham were sent to me by Unearthed as free samples but I was neither expected nor paid to write this post and all opinions are my own.

4.7 from 3 reviews
Spaghetti with chorizo meatballs and homemade tomato sauce