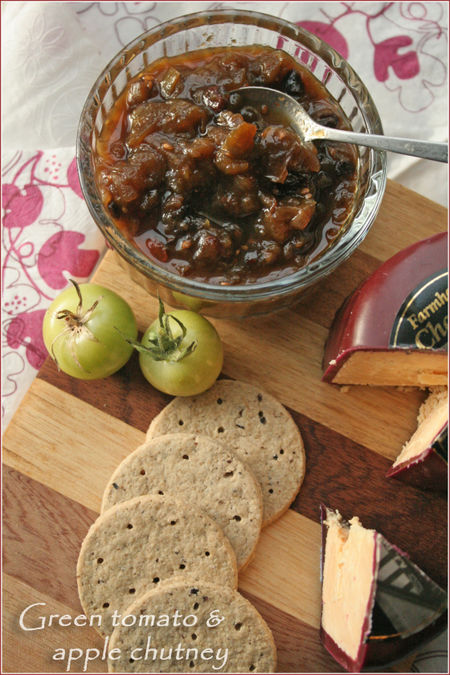 I like to believe that things happen for a reason.

The reason is sometimes frustratingly not apparent at the time when things are happening, but if you wait long enough, nine times out of ten the reason becomes apparent later.

If things had gone according to plan, I would have planted my Moneymaker tomatoes, lovingly tended them, got Nick to make a growing frame for them, trimmed their leaves to give the fruit more sun, and this beautiful crop of 36 or so tomatoes would slowly grow to sun-ripened scarlet goodness and become caprese salads, roasted tomato sauces and pizza toppings.

But that’s not what happened.  Well, the first part did happen, albeit (ahem!) a few weeks later than tomatoes were supposed to be planted.  But all seemed to go according to plan from there.  The seeds germinated, the plants flourished and the crop looked promising. But that’s when Things Happened.  Two things in particular:  a spectacularly un-sunny summer which simply did not ripen the tomatoes; followed by my trip to the USA during which time my neighbour kept an eye on my garden.  She did a fine job, and left the tomatoes on the plants to try and catch some late sun and ripen.  As there had been a cold snap while I was away, I thought the few wilted, brown leaves might have been a result of this.  It was only when the brown bits spread that I read up and realised it was tomato blight.  Bugger!!  So all bets were off and all the tomatoes that were free of brown marks had to be picked immediately – green as green can be.

I did toy with making fried green tomatoes, but since Nick had spent so much time making the growing frame I thought it woudl be churlish to finish all the tomatoes while he was still in Chicago.  So the race was on to find something I could make that woudl keep till he came back.  Inspiration came from an unusual source – EAT sandwich shop.  I was too lazy to make sandwiches one day last week so I popped down there for lunch and got a Cheddar ploughman’s sandwich.  But something about this sandwich was different to the ones I’d had before – the chutney they were using was new and super-delicious.  It was listed on the back of the pack as green tomato and apple chutney, and in a flash I knew what I’d be doing with my green tomatoes.

I will confess to being a jam/chutney virgin and was slightly worried that this plan would go horribly wrong, but armed with a recipe from the BBC (which I halved and added some spice to) and some advice from the internet as to how to sterlise jars, I gave it a go.  The thing that has always put me off making jams and preserves is the sterilisation of the jars – and if you share my trepidation, let me set your mind at east – it’s not difficult!  I promise.  I’m a total wuss and I managed. And the resulting chutney was so spectacularly good as to rival South Africa’s favourite, Mrs Ball’s.

So what seemed like a gardening disaster happened for a reason, and that reason is 2 jars of heaven.  If life gives you green tomatoes, make chutney! If you are using fresh ginger root and chillies, bruise the ginger slightly and chop the chillies.  Tie in a piece of muslin.  If, like me, you don’t own a piece of muslin or fresh ginger root, take a  heaped teaspoon of grated ginger in brine and 1/2 a teaspoon of chilli flakes and place them in a tea infusion ball.  Attach by its hook to the side of the pot you are using so that it will hang in the chutney mixture without getting lost.

Chop all apples, tomatoes, raisins and shallots.  Place in a large pot together with the other ingredients and bring to the boil.  Stir until all the sugar has dissolved, then turn the heat down to leave it on a low simmer until the desired consistency is reached.  I left mine till most of the liquid had cooked away, probably an hour or so.

To sterilise the jars:

Wash the jars and lids in hot, soapy water.  Place the damp jars upside down in a cold oven and turn it to 160C.  Once the oven has heated up to 160C the jars are ready to be used.  In the meantime, place the lids in a small saucepan of water and bring to the boil.  Boil for 5 minutes, after which the lids are ready to use.

Carefully remove the HOT jars from the oven and fill each with chutney.  Screw the lid on tightly.  As the chutney starts to cool, the lid should be sucked down into the sealed position (I was impetient and kept popping the lids down to see if they’d stay down and was squealing with unbridled delight when they sealed. But I’m a little strange that way.)

I’m submitting this recipe to Rachel of The Crispy Cook who is hosting the current edition of Grow Your Own, the event where you cook with produce that you’ve grown yourself.