Am I the only one whose heart sinks when I read about a restaurant where the cuisine is described as pan-[insert huge geographical region here]? Africa is a continent, not a country (as they say), and a vast, not-very-homogenous one at that), and pan-African cuisine can only lead to the kind of messy culinary copulation that you find served at Shaka Zulu.  The same goes for pan-American cuisine, encompassing the incompatible extremes of Chilean cuisine in the south, Alaskan cuisine to the north and the full complicated, diverse gamut of South, Central and and North America in between.  Fusion food between two cuisines can be traumatic enough. Trying to fuse a continent’s cuisines just smacks of chronic inability to make a decision.

So when I saw Naga restaurant in South Kensington being repeatedly described as a pan-Asian restaurant on the internet, I steeled myself for the kind of mish-mash cuisine described above – a culinary version of the jack of all trades and the master of none.  But As always, it’s the exception that proves the rule, and in the pan-Asian stakes, Naga is definitely the exception.  On their own website, Naga is described as serving predominantly Vietnamese food with influences from neighbouring Asian countries, including China.  Head Chef Syarief was recognised in the Asian Curry Awards 2011 as Best Pan-Asian Chef; and a year later Naga also won Best Chinese Restaurant 2012 In the same awards. The street entrance just off Kensington High Street is unprepossessing – a narrow shopfront that is taken up almost entirely by a bar area.  But step past the bar area and you are in for a surprise as the room suddenly opens up into a sleek double-volume space with a glass conservatory roof, a mezzanine level and lush palms.  I haven’t been so surprised since I visited Cigalon. 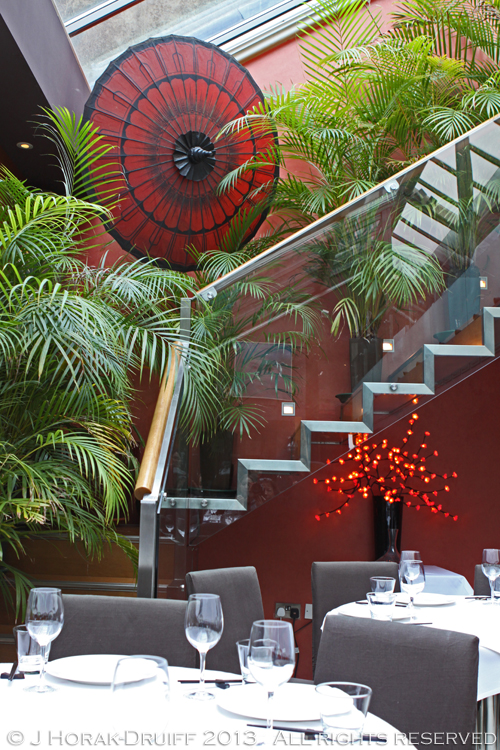 The menu does indeed range across southeast Asia, but the emphasis remains largely on Vietnam and China.  Although we had pre-ordered one dish (the lobster noodles which needs to be ordered 24 hours ahead), for the rest of the meal we gave the kitchen carte blanche to send out what they wished (refer to previous quip about inability to make choices!).  Being four people, this meant that we could try many more dishes than if we were dining alone and I think overall we got a good feel for what the kitchen can do. 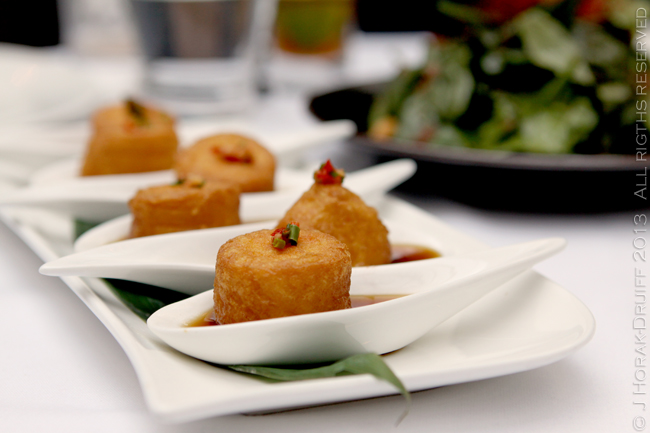 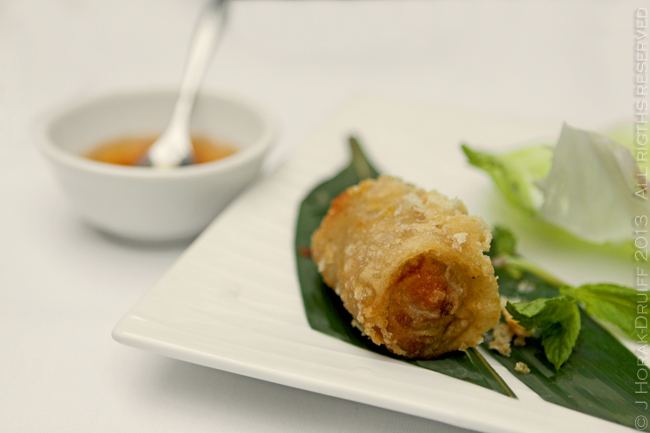 First up was a dish I would never have ordered for myself:  silken tofu with ginger dressing (£5.70). I always imagine tofu as a spongy version of feta, minus the taste – but silken tofu is a whole other beast.  Unlike its crumblier cousin, silken tofu trembles like a pudding, has a lighter texture and a creamy mouthfeel that comes from using richer soy milk.  Here, the silken tofu portions are lightly deep-fried to help them hold together and served on individual spoons of dressing.  Surprisingly, I loved these – almost like savoury créme caramel – although the dressing was more soy sauce than ginger.  The presentation was marvellous though and we were actually fighting over the last portion.  Another starter dish was the Vietnamese spring rolls (£6.00) filled with a mixture of pork and mushrooms.  They were tasty enough, but the wrappers were a little too thick – making them easier to handle, but unattractively chewy. 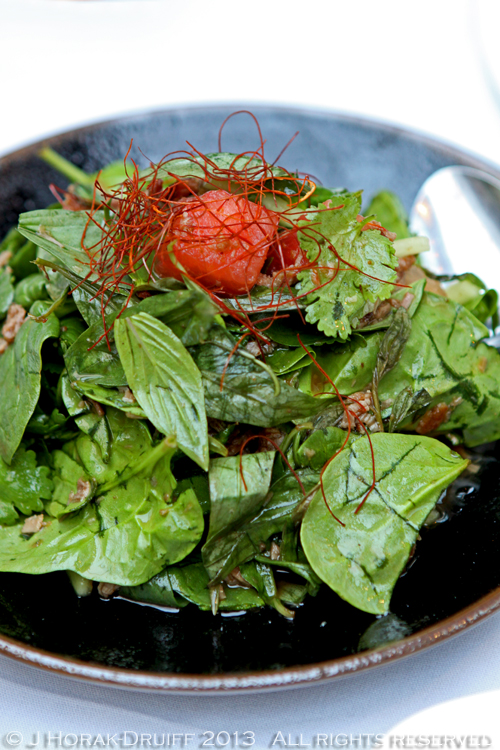 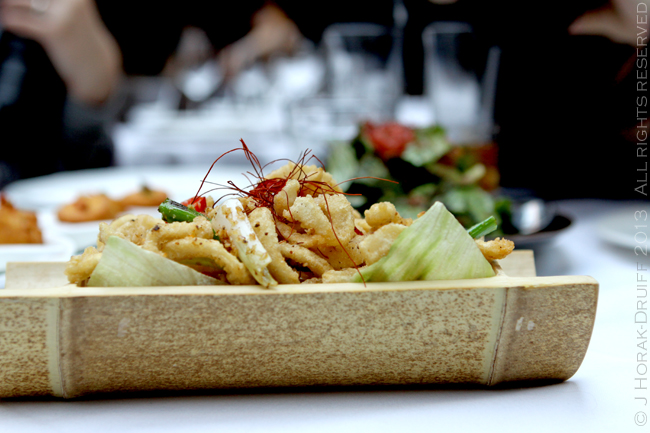 Still on the starters, we also had a duck and watermelon salad (£8.50), which I think is one of Naga’s signature dishes?  This was one of my favourites of the day, with the duck cooked briefly enough not to become dry or chewy.  I loved the richness of the duck contrasting with the herby flavours of the leaves (which included Thai basil), and as a sucker for duck served with sweet things, the watermelon chunks provided a delicious counterpoint to the umami-rich fish sauce dressing. A very successful dish. The final starter was some crispy salt and chilli squid (£7.50), prettily served in a piece of bamboo.  The batter was light and crispy and the squid tender with a good sprinkling of chillies, but underseasoned as far as salt goes – an odd defect for a dish that even has salt in its title! But salt is easy to add, and I still enjoyed this dish. 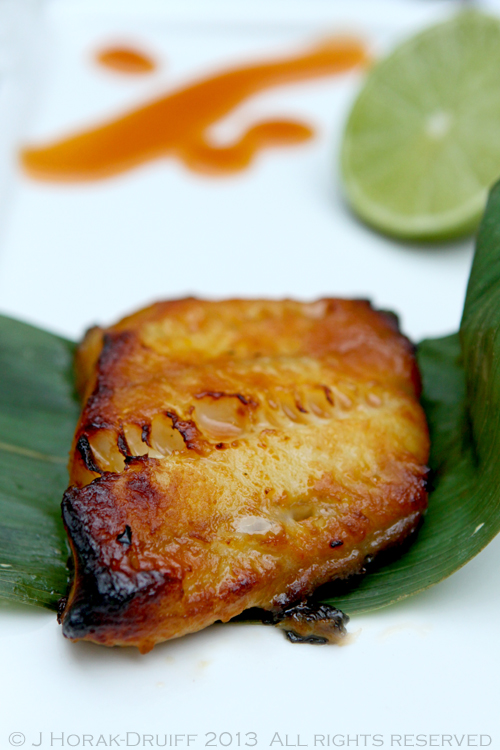 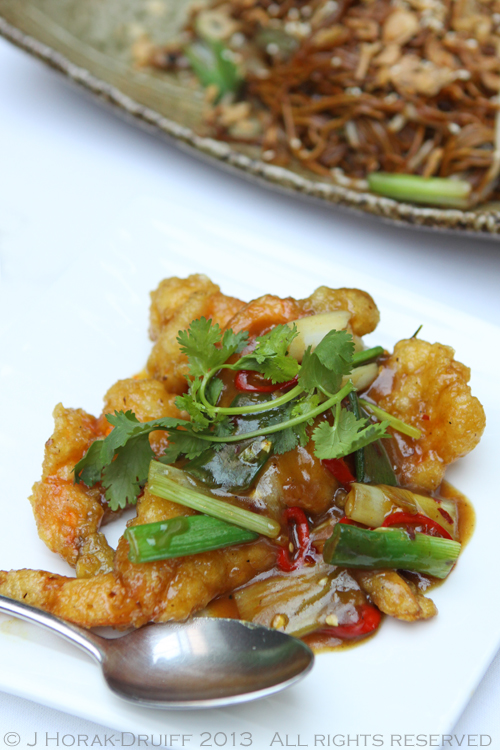 Main courses included seafood, meat and vegetables, starting with the ‘Naga’ black cod (£19.50).   As is the case with this dish served in other establishments (Nobu springs to mind), it’s pretty eye-wateringly expensive.  It’s a small piece of fish, and it comes with nothing other than a smear of sauce. But when it’s done right, a small piece is enough – a sticky, smoky, sweet-savoury exterior and a barely-cooked flaky interior – which is exactly what Naga served. Not exactly value for money, but delicious nonetheless.  Deep-fried tamarind & lemongrass king  prawns  (12.90) were served butterflied and coated in crispy batter – tasty and not at all oily, plus I loved the sweetness that the tamarind brought to the dish. 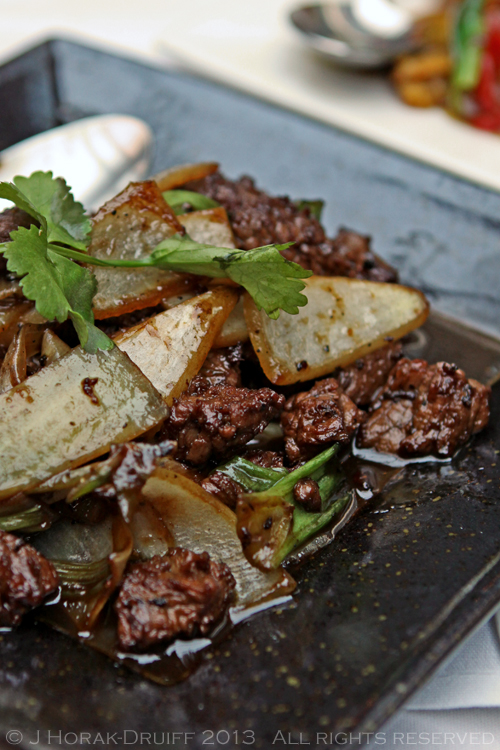 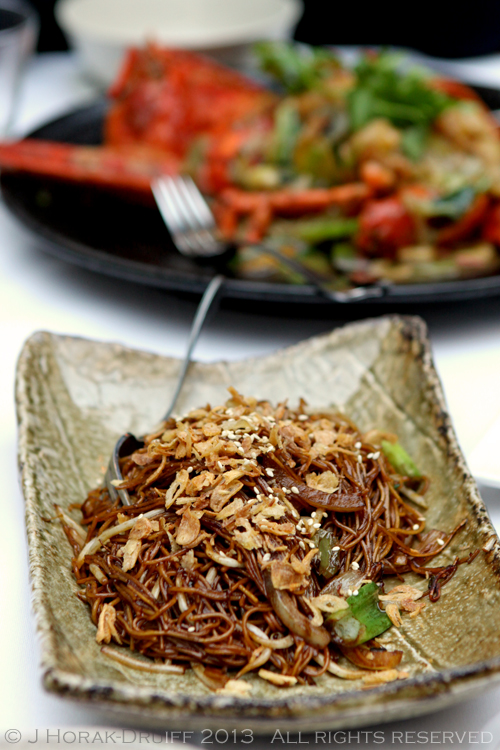 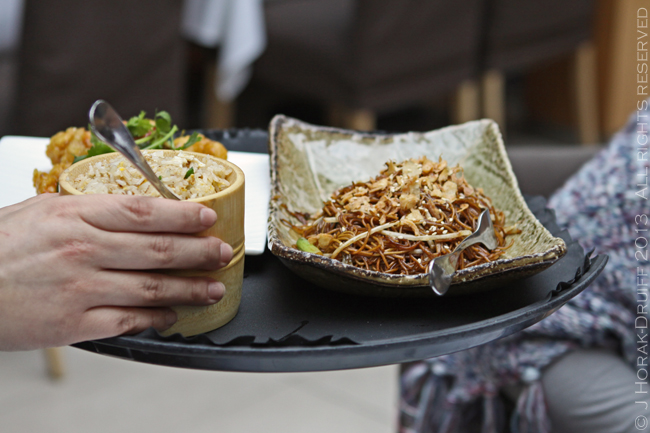 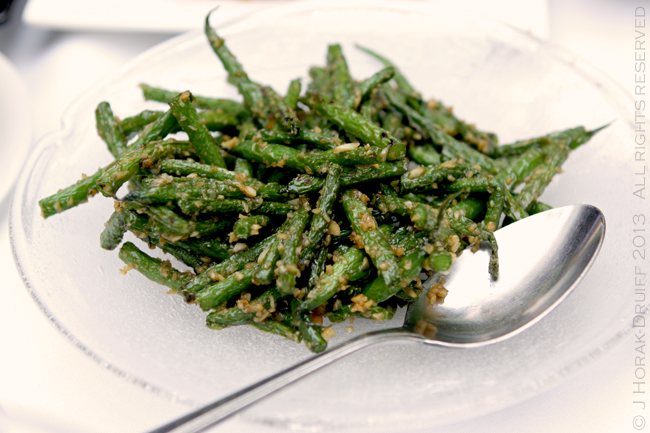 I thought the beef fillets flash fried with scallions (£14.50) were good (although I am not sure I would call the chunks of obviously large onion in there scallions) – a robust meaty flavour and enough sauce.  They paired well with the Singapore vermicelli noodles (£9.50), traditionally made with shiitake, beansprouts, garlic, shrimps and pork but served more simply in a vegetarian version here with just garlic, beansprouts and spring onion.    The consistency of the noodles was perfectly al dente and the seasoning was spot on.  Usually the starchy dishes in a meal are boring fillers, but this was a highlight for all of us.   We also ordered egg-fried rice (£6.00) which I did not try but which Margot found to be tasty but a little oily. But the surprise hit of the afternoon was most certainly the garlic French beans (£7.50).  Evidently they are first lightly roasted and then wok-fried (and at some point they acquire a generous coating of garlic and sesame seeds), leaving the bright green, still crunchy, and redolent with punchy garlic flavour. If all vegetables tasted this good, we’d all be vegetarian. 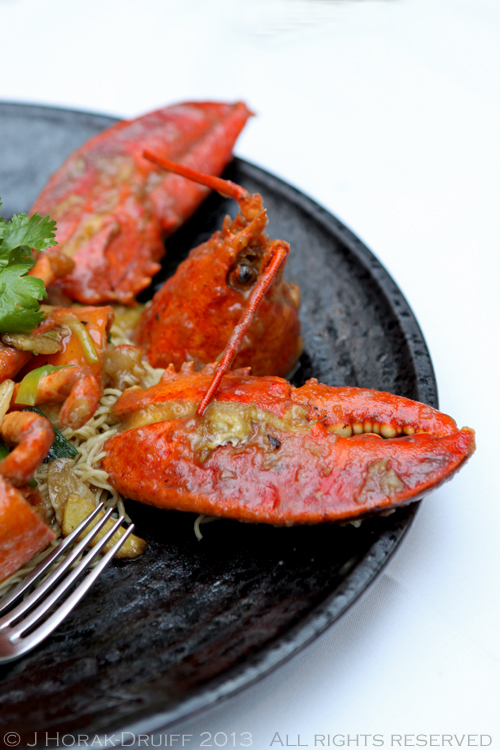 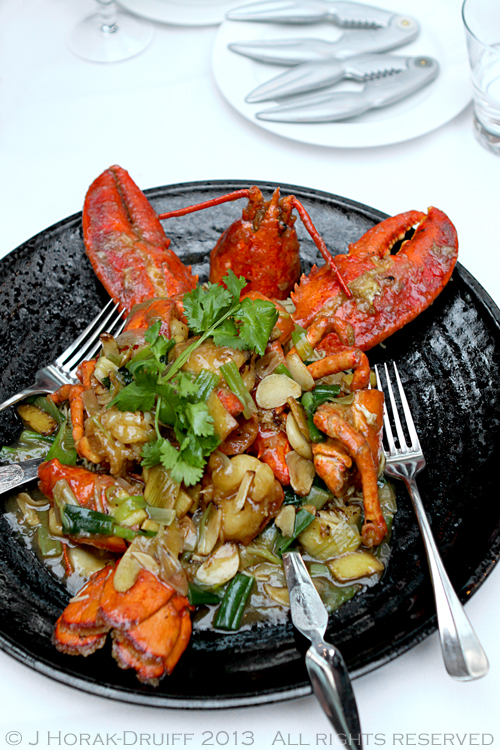 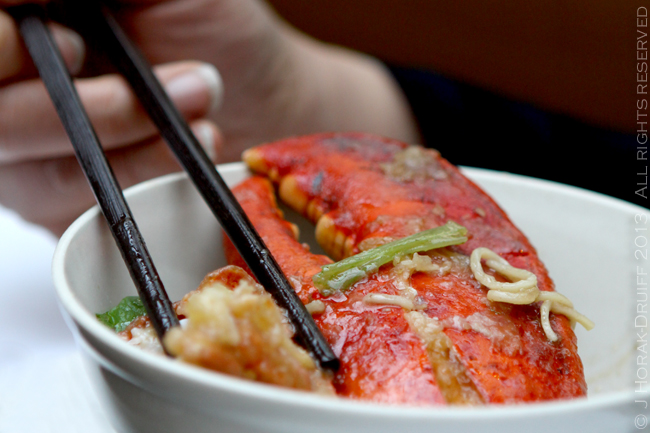 The star of the show, visually anyway, was the Canton-style lobster noodles (£29.90) .  As I said, these need to be ordered 24 hours in advance  and the dish consists of a base of fresh egg noodles topped with a whole lobster braised in a ginger and spring onion sauce. The lobster is also helpfully cut into single-serving chunks and then reassembled on the serving plate to something resembling its living configuration, so the only time you have to resort to tools is for the meaty claws.  I thought the flavours of this dish worked beautifully, playing off the sweet, juicy flesh of the lobster against the mild bite of ginger and spring onions.  I’m told the noodles were a little soft and the sauce was a little scarce, but if you come to this dish as a novice with no expectations, you will definitely not be disappointed.  This could easily become my new favourite way to eat lobster.

By now, we had feasted late into the afternoon and were the only customers remaining in the restaurant.  There was a slightly awkward pause after the plates were cleared and we were not sure whether we would  be offered dessert and tea/coffee or not, or whether we should be leaving. In the end we thought it kinder to the staff to take our leave, but I was left wondering whether dessert is not a big thing at Naga, or whether we had simply overstayed our welcome?  There is no evidence of dessert on the menu on their website.

In total, everything we ate above would have come to about £32 per head which I thought was exceptional value, considering the quality of almost all the dishes and the fact that we all left feeling very well fed. Add a glass of prosecco and you are still going to come out at about £40 per head for a veritable feast.  Service was efficient, if not particularly friendly (although the manager was effusive and keen to hear our thoughts on all the dishes).  If you are looking for somewhere to rest your weary bones after the bustle of High Street Kensington and enjoy a fantastic Oriental meal in an elegant and bright room, this is the place to do it.

For other perspectives on our meal, have a look at

Liked: the high quality of the food (especially the lobster, beans and the tofu); the wonderful room, the value for money
Disliked: nothing
In a nutshell: A wonderful place to enjoy top-notch Oriental food in a serene location a stone’s throw from the crowds of Kensington High Street
Wow factor out of 10: 8

DISCLOSURE:  I enjoyed this meal as a guest of the Naga Restaurant but received no other remuneration to write this post and all opinions are my own.