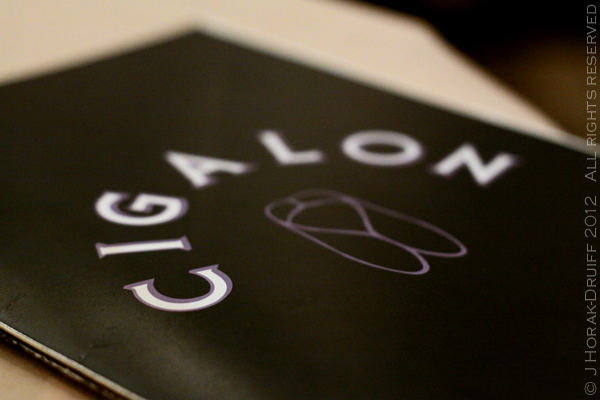 I have said it before, but let me repeat it again for those at the back who were not listening:  I. Love. London.  It contains so many things that I love.  It has iconic buildings, monuments and museums (many of them free!).  It has a sense of history and occasion.  And it has a predictably unpredictable but somehow always… homely public transport network (compare it to the New York subway if you’re wondering what I mean by homely!). But the one thing it does not have is a night alive with sounds, like the African nights I grew up with and often long for:  crickets, frogs, nightjars and owls – a virtual midnight chorus.  In London, even in the leafy suburbs, the night always seems uncomfortably silent and sterile. So imagine my surprise when I recently went to dinner at Cigalon on Chancery lane and dined to the sound of… cicadas.

And that’s not the only surprise when you arrive at Cigalon, sister restaurant to the very lovely Club Gascon and its little cousin Comptoir Gascon.  The restaurant (named after a character in the eponymous 1935 Marcel Pagnol film) is situated in a former auction house on Chancery Lane: Andrew and I stepped off the grey London street through a narrow door and emerge totally unexpectedly in a double-volume dining room with a greenhouse-style glass ceiling, reed fence walls and the piped sound of singing cicadas. I could not have been more surprised had a giant cicada in a 3-piece suit greeted me at the door!  Within moments of leaving Chancery Lane, you are all set for dinner on a friend’s terrace on a warm night in Cannes, complete with spindly, graceful light-fittings that hover above you like some glamorous starlet’s sun hat. 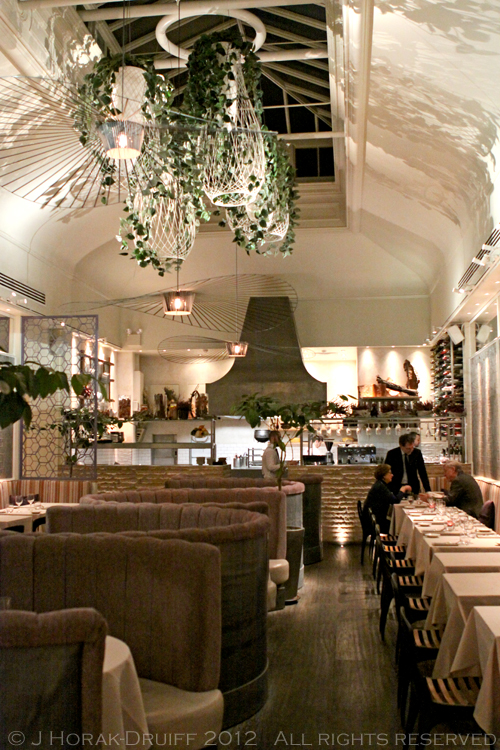 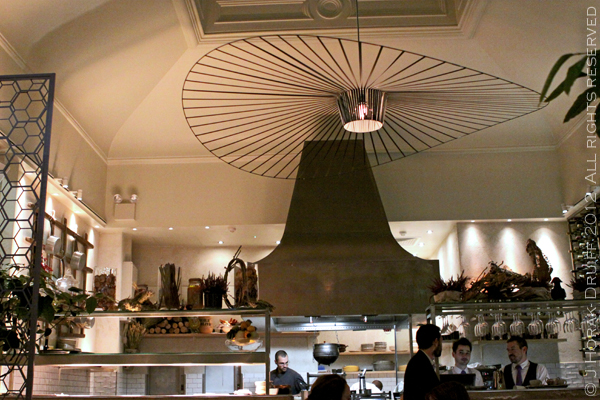 This is the latest addition to French chef Paul Aussignac’s growing empire of London restaurants (which, other than Club Gascon, Cellar Gascon and Comptoir Gascon, also includes Le Cercle) is billed as a Provencal grill and marks a move away from the food of Gascony which he has prerfected at his other restaurants. And it’s not only the beautiful surroundings that call to mind the south of France – the menu is also fiercely loyal to the region and its unique flavours. Salade Nicoise rubs shoulders with pissaladiere, black olive tapenade and cassolette of snails with anchovies; and the wine list is exclusively French with a strong focus on Provence and Corsica.  Friendly and charming staff soon had us settled in our unusual high-backed circular booth sipping Billecart-Salmon Brut Rosé and nibbling on lacy melba toast topped with some of the best black olive tapenade I have ever tasted: glistening, inky and intensely flavoured. 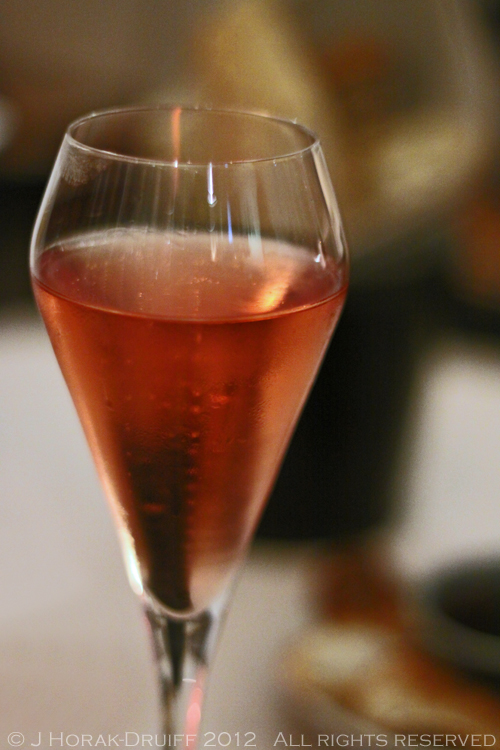 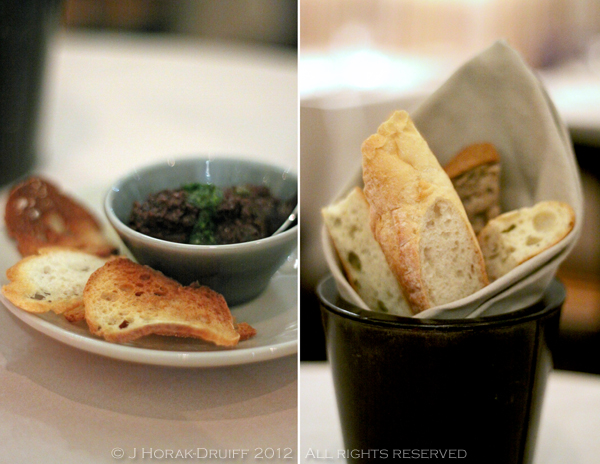 The menu is an altogether more informal affair than what you would expect at Club Gascon, divided simply into starters, mains, sides and desserts and no more than 8 options under each.  Even so, it reduced me and Andrew to an agony of indecision!  But the very first thing that I fell irretrievably in love with at Cigalon was the crockery.  When I dined at Club Gascon, I thought they had the most covetable plates that I had ever seen in a restaurant. But as it turns out, that honour belongs to Cigalon.  Swoon.

We put our wine choices in the hands of the somellier, asking him to match a glass to each course, and set off on our Provencal journey. For my starter, I chose foie gras terrine with pink grapefruit jelly (£13.50) paired with a glass of 2011 Tariquet “Premières Grives” (Côtes de Gascogne). It’s really hard to overstate how surprisingly lovel this unusual combination proved to be.  Although the terrine was initially served a little too chilled, as it warmed a little on the plate it acquired the ridiculously buttery consistency that I love so much.  The grapefruit jelly was like the dot on an exclamation point, providing a bright counterpoint to the rich terrine. The Tariquet was a perfect choice, with the richness of a Sauterne that was more than enough to match the richness of the food.  I was in foodie heaven already.  Andrew chose the Provençal & Corsican charcuterie platter (£9.50), which was matched with a glass of 2010 La Ferme Julien (Cote Ventoux). This bounty of saucisson sec, chorizo, two types of cured ham, cornichons and pickled onions was both impressively large and most delicious – Andrew was particularly fond of the sweet, nutty ham. 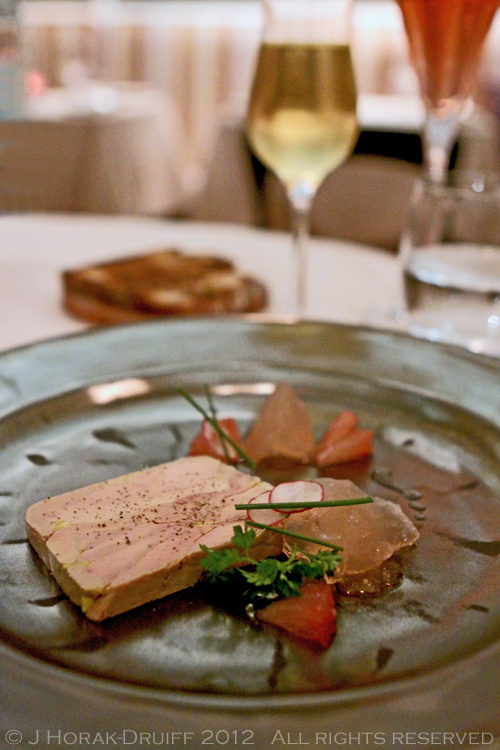 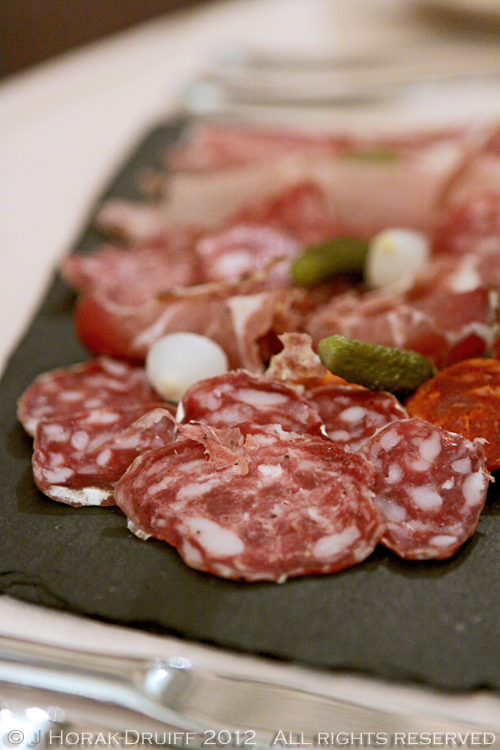 For my main course, I chose the wild rabbit saddle and leg with Jerusalem artichokes and chestnuts (£19), which was paired with a glass of the 2008 Domaine Triennes “Les Auréliens” (Côteaux Varois), a lovely spicy wine with herby hints and lots of big berry fruit.  I am always surprised at the first bite of hare or wild rabbit just how… gamey it is – and this was no exception: a wild, “barnyard” taste that’s almost shocking at the first bite. I loved the contrast between the firm white meat and the leg that had been cooked so long that it was close to falling apart, served in a tarry jus the consistency of honey; and I loved the crispy strips of Jerusalem artichoke with which the meat was topped.  But the thing I loved most on that plate (possibly out of the entire meal) was the innocuous square of Jerusalem artichoke dauphinoise.  My first mouthful induced such rapturous groans that Andrew immediately wanted a piece – it had the earthiness of the artichokes, the yielding texture that a long time in the oven brings, and and the warmth of chilli pepper (possibly infused into the cream? No flakes were visible.) Sublime. I would go to fairly serious lengths to prise this recipe out of the chef – it was that good. Andrew’s main included a nod to the proximity of Provence to Italy: grilled beef onglet, gnocchi, baby onions & red wine jus (£18.50) paired with a glass of 2010 Clos Culombu (Corsica), an unsusual and spicy red. Onglet is not the most tender cut of beef but is certainly one of the most flavourful, and this one was just perfectly pink in the centre and offset beautifully by the sweet baby onions.  The gnocchi were fluffy and topped with fried sage leaves – my favourite. On the side, we also had some very good sauteed juicy greens (£3.50) consisting of garlicky baby spinach and crispy mangetout peas.

Faced with the dessert menu, my eye was instantly drawn to the French goat & ewe cheese selection (£8.00) which was presented on a small stone slab and consisted of:

These came with a tangy violet jam and a glass of Domaine des Demoiselles, “Solera” – NV Rivesaltes Ambré – an absolutely delightfully coloured dessert wine made in the same way that sherry is, with a nice bit of acid which helped it to stand up to the strongly-flavoured cheese.  Andrew opted for the “Café Gourmand” selection of small desserts with coffee (£6.00) – paired with the same 2011 Tariquet “Premières Grives” (Côtes de Gascogne) which I had with my foie gras. Each small bite of dessert was intriguing, especially as they came with no explanations, so each one was a surprise (the favourite being the feather-light chocolate mousse on a ridiculously crumbly shortbread).  But Andrew felt that the wine was not a great match & he would have chosen the same as me, if I had not already chosen it!  Next time. 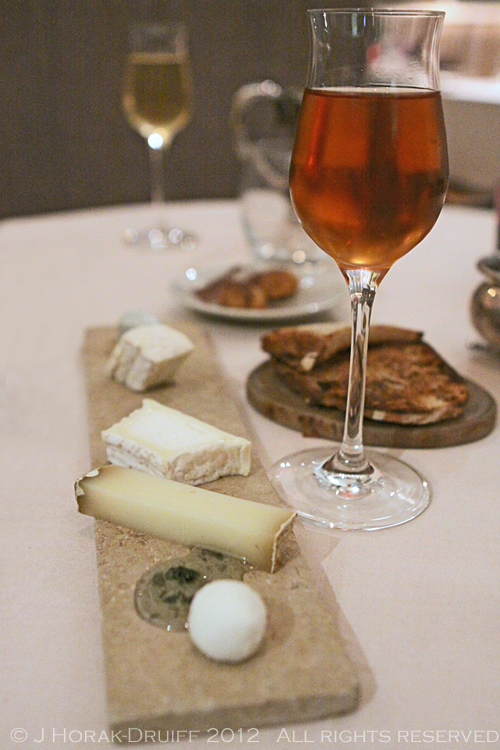 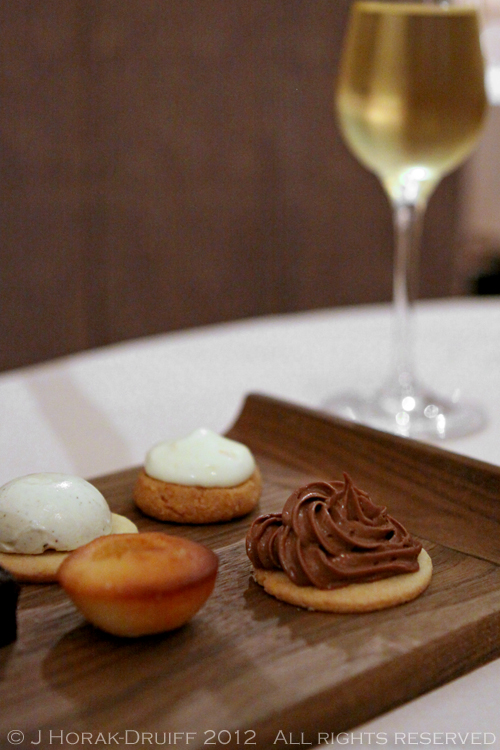 We lingered long after most other tables had left, eventually being the last people to leave the restaurant, and not once did the staff roll their eyes, act bored or cough conspicuously.  In fact, the lovely, smiley, knowledgeable and professional staff were one of many highlights for me.  Another was those round high-backed banquettes – I can imagine few more suitable places for a discreet romantic liaison in Central London! And then there was the food.  In a word?  Faultless.  Not a single duff note in all the dishes and in fact, some dishes that I will carry in my memory for a very long time – which to me is the mark of a great meal. The price of our meal with wine would have been in the vicinity of £60-£70 per head – not cheap but oh what memorable meal it buys. For those who want to spend less, they also do extremely well-priced lunch menus: £19.50 for 2 or £24.50 for 3 courses. My advice?  Just book.

You can read Andrew’s review of our meal here. 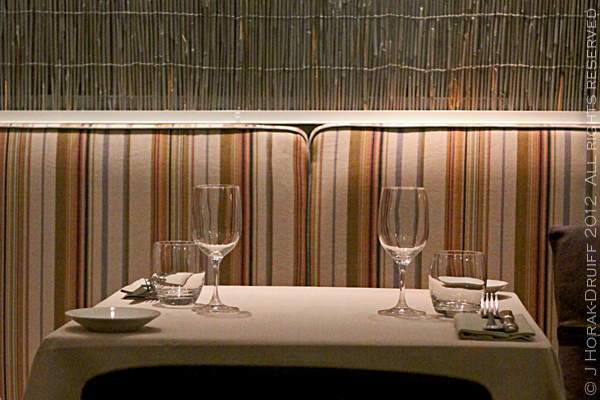 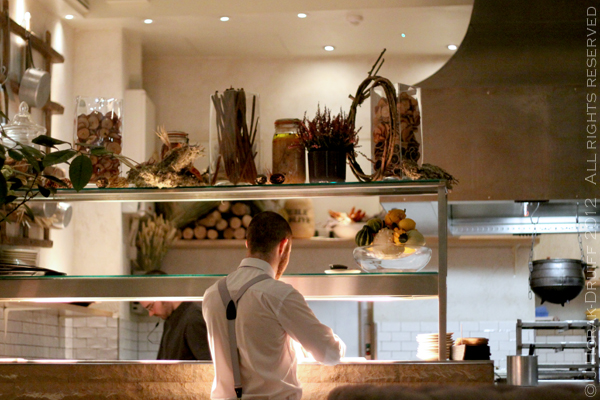 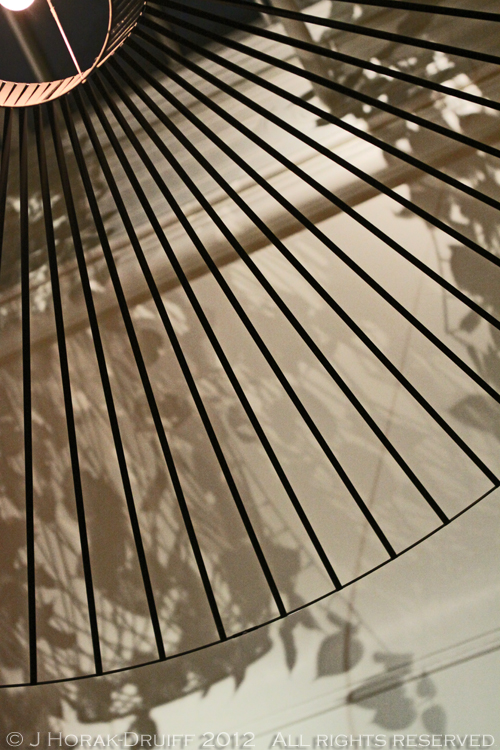 Liked: the wonderful food, the beautiful room, the excellent staff
Disliked:  nothing at all – faultless!
In a nutshell: An oasis of Provencal loveliness in the City with memorable food
Wow factor out of 10:  10

DISCLAIMER:  I enjoyed this meal as a guest of Cigalon but received no remuneration other than the meal.  All opinions are my own.

« Saturday Snapshots #221
Persimmon and cranberry crisp – and a workshop! »