Like many other children of the 1970s and 1980s, I did not exactly grow up thinking of Russia as a culinary hotspot.  For me,  Russia conjured up visions of the frozen steppes and white nights; of food shortages and old women queueing in the snow for a single loaf of bread;  of  grim-faced KGB men in fur hats driving Ladas; and of the assured mutual destruction of nuclear war.  Even as a teenager, I clearly had a flair for the dramatic.  But as Mikhail Gorbachov introduced glasnost and one by one the fortifications of the old USSR fell,  it slowly became apparent that as much as the evil west had been misrepresented to an entire generation of Russians, so the image of a relentlessly grim Russia had also been misrepresented to my generation.  Behind the po-faced curtain of communist rule and conformity was a vibrant and ancient food culture, waiting to be discovered by and shared with the West.

But despite it now being over two decades since the USSR disintegrated, and despite the growing numbers of eastern Europeans now living in London, I had still not dined in a Russian restaurant.  But that was easily rectified when I was invited to a Winter Warmer dinner at Mari Vanna. Following the success of sister restaurants in St Petersburg, Moscow and New York,  Mari Vanna opened in Kinghstbridge, London in December 2011, a stone’s throw from Harrods. Walking into the  candlelit interior is like stepping into the parlour of your  eccentric Russian maiden aunt, who has a hoarding problem.   Every inch of wall and every nook and cranny is overflowing with framed photographs, mismatched furniture, ornate crockery, French lace, crystal chandeliers  from St Petersburg, lamps draped with fringed shawls, wooden stacking dolls, bookshelves filled with Russian literature, and crystal bowls of Sushki (a traditional Russian tea bread). The eccentricity also extends to the bathrooms where you conduct your business to the sound of Russian folk songs and the loos have old-fashioned pull-chain mechanisms. It’s the kind of place that makes minimalists break out in a cold sweat – but charming for all that, and a refreshing break from the blond wood Generic Gastropub school of decor. 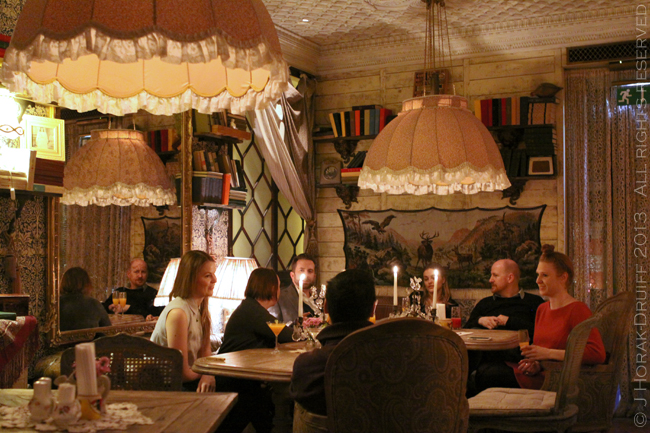 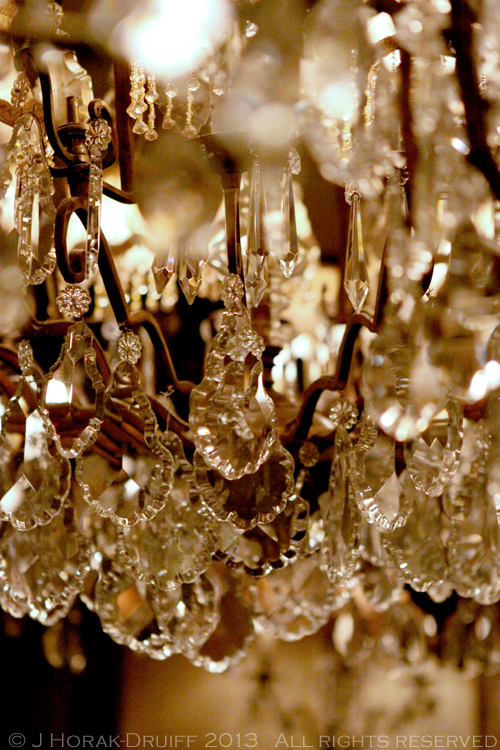 But there is nothing eccentric about the menu which reads like a greatest hits album of traditional, rib-sticking Russian food.  We started off downstairs with cocktails from a characteristically unusual menu – mine was a deliciously tart Oblepiha’s Dream (£13 – primarily composed of passion fruit, vodka and Champagne) but you could also have gone for Sex on The Birch…! Once we’d finished those, we moved upstairs to dine at a table with a good view of the impressive collection of jars of homemade infused vodka on offer. Luckily we did not have to face the agony of deciding what to order – the restaurant had decided on a menu for the whole table and the food just kept on coming. Here’s how the evening unfolded. 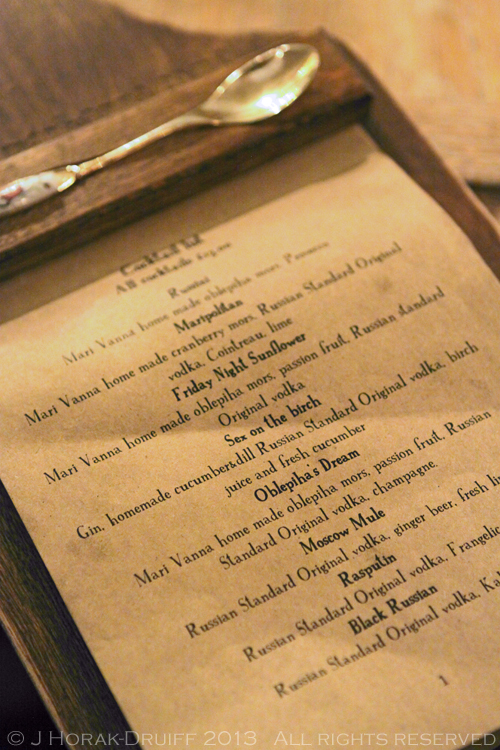 While we were waiting for the food, we were presented with an excellent plate of bread – a nice mix of white, wholegrain and seeded. This was followed by a selection of Russian starters.  Pirogi are traditional pasty-shaped pies popular in a number of eastern European cuisines.  At Mari Vanna, you can choose from 3 flavours: the delicious  beef and pork; the pescatarian seabass; and the slightly peculiar egg and cabbage (£3.00 each).  The pastry is lighter than I had expected and deliciously crumbly with the presence of butter.  Hiding its light under a bushel was herring in a shuba-coat – a traditional layered salad with beetroot, salted herring and potatoes in a light mayonnaise dressing, covered in grated hard-boiled eggs (£11.00).  I loved this – particularly the interplay between the earthy beetroot and the salty herring – it’s quite rich, but then you need your calories on the frozen steppes! A more familiar- looking Russian treat was the Russian “Olivier” salad with ox tongue (£10.00).  Picture a classic Russian salad with diced carrots, pickled cucumbers, peas and boiled potatoes in a mayonnaise dressing, then add some rich and delicious cubes of cooked ox tongue – voila!  A new classic and a new addiction for me. To make sure we got a little fibre in our diet as well, there was a little pot of nutty buckwheat with mushrooms and onions (£6.00); and to counteract any healthy effects of the buckwheat, there was also a decadent traditional Georgian bread pie called hachapuri, stuffed with suluguni cheese. Bread. Stuffed. With. Cheese.  Ponder that for a second. It was like an eastern-European pizza sandwich and I confess that I was smitten. 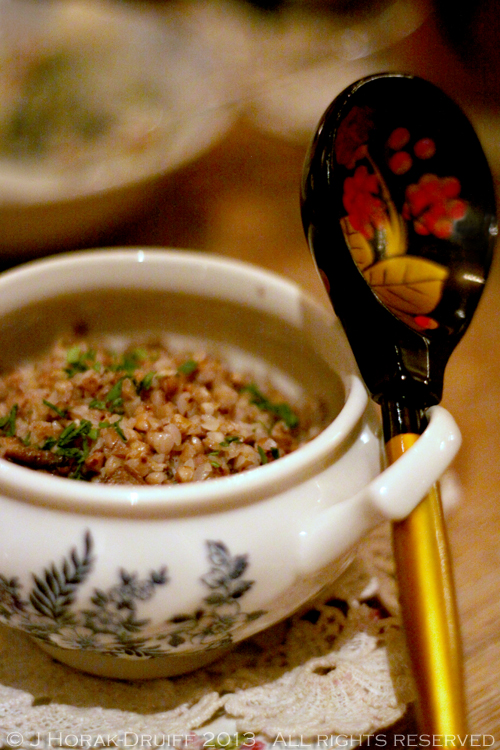 Of course, no Russian meal would be complete without traditional borsch (£9.00) – a beef and beetroot soup served with sour cream and pillowy pampushka bread.  The consistency was more that of a beetroot broth, but the presence of the beef strips made this a substantial, tasty and satisfying dish. From the main course section of the menu, we had golubtzi (£15.00) – another classic dish of cabbage leaves stuffed with pork, veal and rice and served covered  in a rich and creamy tomato sauce. I remember my late sister making these for us in France and this dish held the lovely comforting taste of childhood memory – satisfying and uncomplicated.  This was followed by something altogether more sophisticated – blinis served with sour cream, red onion, grated hard-boiled egg and our choice of smoked salmon (£17.00) or salmon roe (£23.00).  I had always thought of blinis as small, fairly thick pancakes but what arrived were more along the lines of what I would call French crêpes, to be filled with the salmon or roe and accompaniments, rolled up and eaten.  I must say that the salmon roe filling was a revelation – jewel-like, saltier than the salmon, and with the added textural interest of the lightly popping roe.  Simply heavenly. Nobody was particularly hungry by this stage, but it would have been churlish not to try something from the tempting dessert menu.  Although I was instantly drawn to the sweet cherry dumplings, in the end I could not resist the allure of the honey cake (£8.00) .  This impressive construction consists of seven layers of wafer-thin honey-filled sponge interspersed with buttercream, and a little chunk of comb honey on the side.  I won’t lie to you – it is intensely sweet, but it is the aromatic sweetness of honey rather than inspid cane sugar; and it is surprisingly light for all its sweetness. The portion is also generous and could easily be shared between two.  And of course, no meal at Mari Vanna would be complete without sampling some of their home-made infused vodkas. I started with a safe choice – the cherry vodka (£10.00), which had the most fantastic magenta colour and a proper cherry flavour tinged with a pleasingly sour edge – not the saccharin flavour of glacé cherries. I was not brave enough to try the horseradish vodka, but I did try the cucumber and dill vodka (£10.00).  This had a sparkling pale green colour and a surprisingly fresh and delicious taste – like a dip in cool water on a hot summer”s day.  It’s an extremely good match for the salmon roe blinis! 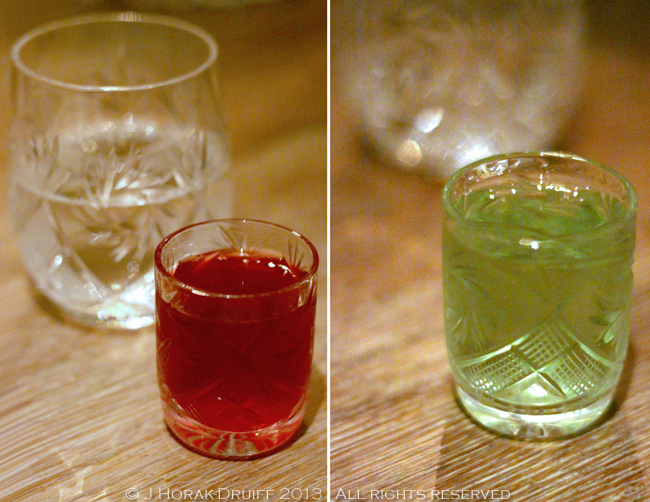 My verdict?  It’s a fabulous (if slightly bonkers) place to while away a few hours people-watching and eating decadent things while winter marches on.  You truly do feel as if you’ve gone somewhere entirely different to London – stepping out onto Knightsbridge  after our meal was a slightly surreal experience, as you half expect your ruddy-cheeked Russian aunt to see you off at the door as you set off across the frozen steppes.  The food was mostly very good and sometimes brilliant (yes, blinis and Oliver salad, I’m talking to you) – and the infused vodkas were addictive.  The catch?  It’s not cheap.  Allowing for the fact that we sampled more things when we visited than one might on a normal dinner a deux, I still reckon a meal would come to about £70 per person including a bottle of wine and maybe a sneaky vodka. Given the fact that it’s located a short stagger from Harrods, I am guessing that most of the clientele are not there for a budget meal.  For a special meal out though, I’d recommend it as a fun and slightly offbeat choice.

For another impression of the evening, see  Fiona’s post.

Liked: the crazy decor, the homemade infused vodkas
Disliked: the fairly steep prices of some items
In a nutshell: A great (if pricey)  introduction to Russian food and drink in a quirky and appealing venue
Wow factor out of 10: 7.5

DISCLOSURE:  I enjoyed this meal as a guest of Mari Vanna but received no remuneration other than the meal itself, and all opinions expressed are my own.