You are here: Home / Shows, launches and events / A Norwegian Seafood supper club with Scandilicious 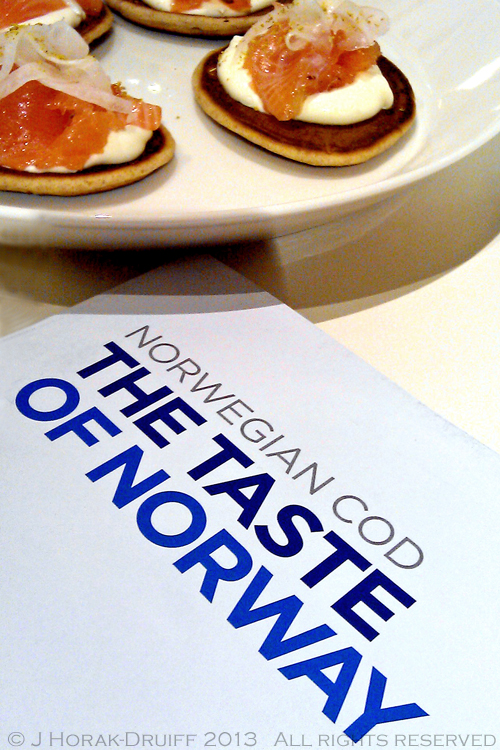 As regular readers of this blog will know, I travel rather a lot; and one of the things I have learnt from my travels is that you will get more out of almost any trip if you do a little research beforehand.  Usually this entails hours sitting in front of the computer, but sometimes the research takes a far more sociable for.  Take my recent ski trip to Norway for example: yes, I put in the hours beforehand doing internet research, but as luck woudl have it, within a couple of weeks of my departure I was also invited to a special one-off supperclub sponsored by Norwegian Seafood to raise awareness of their delicious sustainable seafood here in the UK.  Talk about synchronicity! Evidently, Norway spends a large amount of time and resources to ensure that commercial fishing is only done in a sustainable manner, and all Norwegian cod is certified as sustainable by the MSC, so it was to be an evening of deliciousness with a conscience.

I was even more thrilled to learn that a) the evening was to be hosted in a Scandinavian design store that I had not yet discovered (Republic of Fritz Hansen, just off Regent Street, full of glorious Scandi design) ; and b) the chef and hostess for the evening would be the lovely Signe Johansen, hostess of the Eat Scandi supperclub and author of two beautiful cookbooks.  I arrived to find Su-Lin already there, wandering around amongst the tomtes and reminiscing about our trip to Gothenburg last December.  The first order of business was to get warm and this was easily taken care of by a steaming mug of glögg, the Scandinavian version of mulled wine, served on this occasion with the unusual but delicious addition of blueberries. To accompany our glögg, Sig sent out some plates of seafood snacks:  rye pannekaker (like blinis)  topped with cured salmon, sour cream and pickled fennel; Norwegian prawns with wild dill pollen mayonnaise, lumpfish roe and pickled cucumber on sourdough crispbread; and the first appearance of the famous Norwegian cod in the shape of battered cod cheeks with dill, anchovy and pickled cucumber salsa.  The blinis were delicious; the cured salmon silky and why oh why do we not eat more pickled fennel?? I was even fonder of the prawn cripsbreads with their fat sweet prawns, contrasting with the crispy cracker and mild cucumber pickle.  Cod cheeks are always a surprise to me (who  could guess how much flesh resides in the cheeks of a fish??) and these arrived at the table crisp and piping hot, straight from the fryer, concealing their interior of moist, flaky fish. Unable to restrain ourselves, we ate them still hot, juggling them from hand to hand to prevent scorched fingers and relishing the wonderfully tangy salsa.  A huge hit! We also nibbled on plates of the most excellent bread I think I have ever tasted in London, from Bread Bread in Brixton.  It turns out that the bread was made by made by fellow-South African and co-founder of Franco Manca, Bridget Hugo – winner of the Young British Foodies Best New Alchemist of the Oven award in 2012.  Bridget explained that all their bread is made traditionally with a sourdough starter sourced from the Isle of Ischia in the Bay of Naples, in clay ovens.  I was particularly smitten with a dark rye loaf which included partially fermented seeds and grains, as well as a touch of molasses for sweetness.  Utterly heavenly with a smear of salted butter! 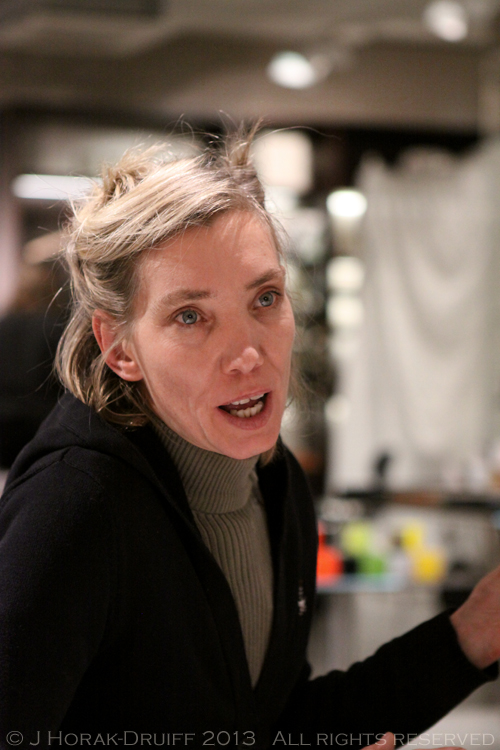 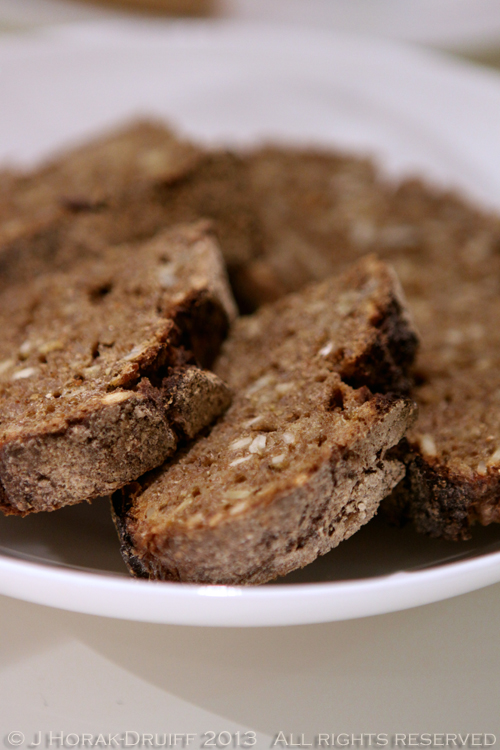 Sig herself then took a break from the kitchen to explain to us that the menu we had and would be enjoying was a showcase of some of the dishes that might appear as part of a Norwegian Christmas meal (although obviously, seafood would be the focus on this occasion!) .   The next dish to arrive was one of my favourites:  lightly-cured halibut with lemon and elderflower. I would never have thought  of serving halibut lightly cured, and now I can’t imagine why not.  The elderflower and lemon cure was mild, allowing the seductive sweetness of the fish to shine through.  A wonderfully subtle dish. Next up was our main course of roast haddock topped with a bacon and rye crisp, accompanied by salt-baked celeriac and a colourful kale and spelt salad. I loved the savoury crisp, and it formed a marvellous contrast with the yielding fish – such a simple yet effective idea. I am already a sucker for celeriac, so unsurprisingly I loved the salt-baked version (which is also a neat way around the thankless task of peeling a knobbly celeriac  before cooking!).  And the kale and spelt salad was the antidote to anybody who has ever accused a salad of being boring, insubstantial or unfulfilling.  Topped with pomegranate arils, it was as pretty as it was satisfying. 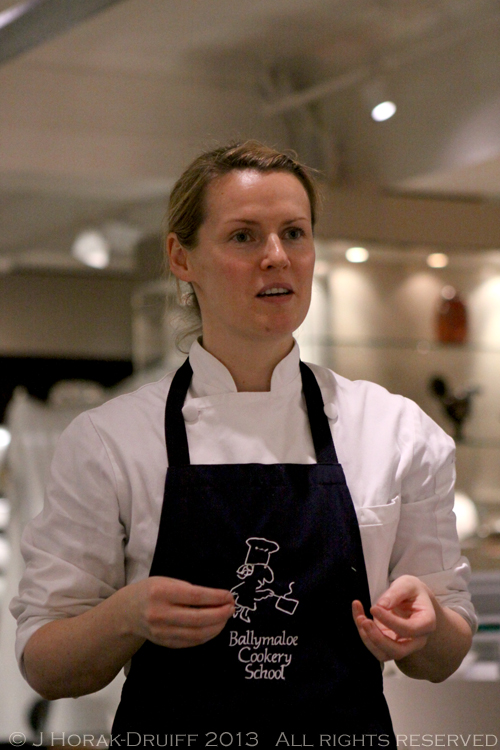 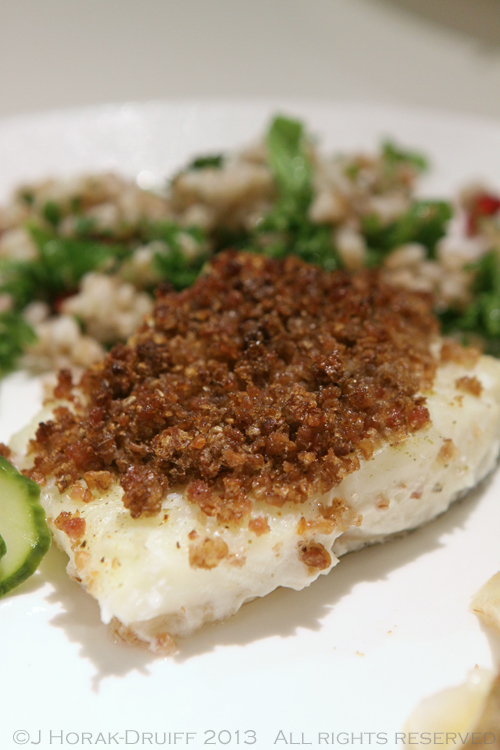 After the fish had been polished off, Sig reappeared bearing a tray of shot glasses and a bottle of Linie Aquavit – and the story of this unusual; Norwegian spirit which has been made since the 15th century and is traditionally flavoured with dill or caraway.  Back in the mists of time, a boatload of Linie Aquavit in wooden barrels was sent by boat to Australia from Norway, but for some reason the alcohol was never unloaded and returned to Norway.  Upon its return, it was taste and found to have a superior smooth and rounded taste.  It is thought that the constant movement, high humidity and fluctuating temperature caused the spirit to extract more flavour, and contributed to accelerated maturation. Norwegian aquavit distillers Arcus has carried out a test where they tried to emulate the rocking of the casks aboard the ships while the oak barrels were subjected to the weather elements as they would aboard a ship, but the finished product was not up to the Aquavit’s usual standards, and so to this day boats loaded with Linie Aquavit set sail from Norway to Australia and back again before they are bottled and sold at Christmastime.  Crazy Norwegians 😉  To accompany this we had traditional Norwegian gingerbread biscuits or pepparkakar made by Sig herself, and as a special treat, she brought out a chunk of brunost, the famous Norwegian caramelised cheese made by boiling a mixture of milk, cream and whey for several hours so that the water evaporates. The heat turns the lactose (milk sugars) into caramel, giving the cheese its characteristic brown colour and sweet taste – imagine a tin of dulce du leche in a sliceable block. It’s not for everyone, but I have to say it is a fantastic companion to pepparkakar! 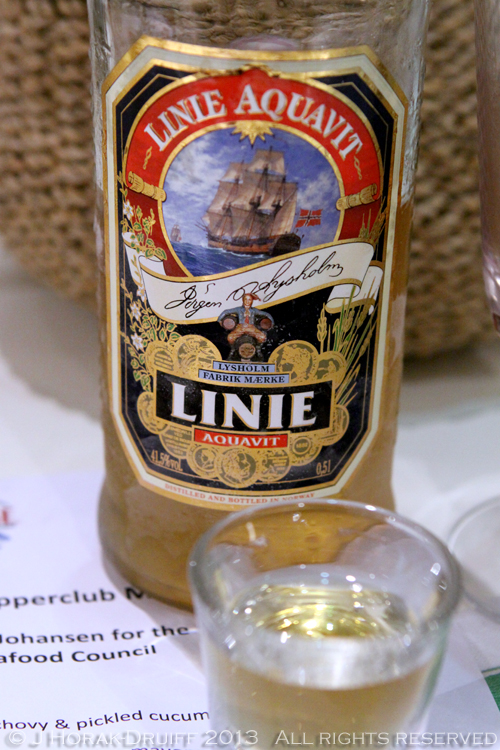 By the end of the evening, I was not only feeling pleasantly warm from the aquavit, but also raring to go on my Norwegian ski trip to try some more Norwegian seafood.  I was also reminded that I really need to get myself to one of Sig’s Scandi supperclubs this year – cheaper than a trip to Norway, and you get to enjoy Sig’s lovely company!  And of course, I shall be looking out for sustainable Norwegian cod in future in London supermarkets in future. 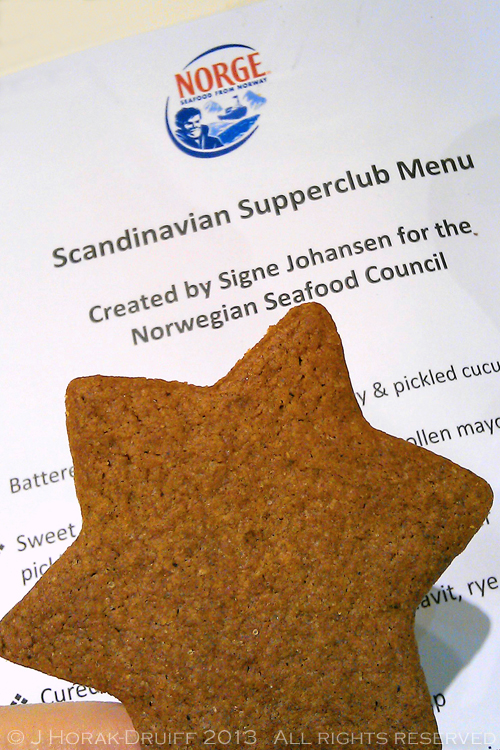 DISCLOSURE: I attended this evening as a guest of Norwegian seafood but received no remuneration other than the meal itself and all opinions are my own.

NEWSFLASH!  If you are in London, you will be getting three opportunities over the coming months to hear me speak!