Isn’t it funny how nobody who does family research ever traces themselves back to Godfrey, son of Godfrey, mediaeval street-sweeper extraordinaire?  Oh no, it’s always “King Henry VIII was my third cousin’s nephew, twice removed!” or “We can trace our family all the way back to Copernicus” or similar. You’d swear that the poor and the working classes were not allowed to procreate, given the suspicious prevalence of royalty’s/celebrities’ modern descendants! In a similar way, somehow we never picture our own death as the mundane, depressing failure-by-degrees, alone in a hospital bed which it so often is. Oh no – we picture ourselves tumbling out of the sky in aeroplanes sans engines; or gored to death while running with the bulls in Pamplona; or killed in an avalanche while skiing in Gstaad. In this vein, I found myself visualising headlines of my own tragi-comic demise recently on a trip to South Africa, in a Landrover in a vineyard, crushed by the weight of a number of unsecured crates of wine as the vehicle rolled.  Talk about living by the sword and dying by the sword…! But I am getting ahead of myself – let’s rewind a few hours.

When I was recently in Cape Town for the Food and Wine Blogger Indaba, Colleen and I were invited to pay a visit to Waterkloof winery, just below Sir Lowry’s Pass in Somerwet West after the Indaba was over.  So two days after the day ot total awesomeness that was the Indaba, we set out for Waterkloof. I say casually that we set out – more like we bundled up in our waterproofs, downed lots of coffee to make up for the general post-Indaba exhaustion, and battled our way along the N2 in insane driving rain and gusts of wind that theatened to push the car right off the road.  Wet and wild, people – wet and wild. We had arranged to meet up with the winery’s lovely Nadia Barnard at a small shopping centre so that we could transfer to her Landrover.  The main road to the farm was being tarred and we would have to take the back road in through the hills and vineyards – a journey that most family cars are not equipped to make.  And this, my friends, is how I wound up 10 minutes later in the back of a Landrover on its third attempt halfway up a slippery, muddy hill with the car leaning over at an alarming angle and all the other occupants of the back seat (a few rather heavy boxes full of wine bottles, and Colleen) rushing rapidly towards me to pin me to the door. I cannot tell a lie: there was a slight sense of humour failure on my part. 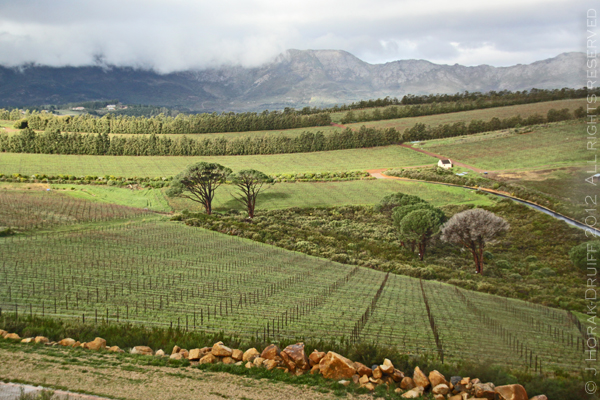 Thankfully Colleen’s husband (aka The Don) stepped in and used his army experience of driving jeeps to engage the 4-wheel drive and get us safely to the top of the hill. And what a view greeted us – a natural amphitheatre on the south-facing slopes of the Schapenbrg stretching seemingly all the way down to False Bay; row upon row of vines interspersed with green grass and flowers (a function of the vineyards being biodynamic); and an ultra-modern tasting venue and restaurant perched like a glass and concrete cube on the one slope overlooking the view.  Schapenberg in the Hottentots-Holland mountain range, only a few kilometres from the False Bay coastline.  It is a Dutch name meaning ‘Sheep Mountain’ because this used to be the hill where former Cape Colony Governor Willem Adriaan van der Stel grazed his sheep, and it also served as his lookout post to identify visiting ships, allowing him to race into town and sell his produce before the competition could. There are already a few wine farms in the area and the planting of vineyards is increasing in this particularly cool-climate area of the designated Stellanbosch wine growing region. Although grapes have been planted on the Waterkloof since the early 1970s, they were usually sold to other wineries to be bottled, Wine importer Paul Boutinot took over the property just before the 2004 harvest, and the first wine bottled under the Waterkloof name was from the 2005 harvest.

A major new planting and replanting exercise was completed by 2008, with vineyard now covering 53 hectares of the 100 hectare farm. Their intention has always been to set aside the other half of the farm to preserve the rare and abundant natural vegetation, fauna and flora (fynbos) situated on the property.  The owners also felt that conventional wine farming methods (e.g. using chemical pesticides and fertilizers), combined with modern, standardized interventionist winemaking techniques (e.g using aromatic yeasts to create a signature aroma profile in a given wine), serve to diminish the differences between various vineyards and winegrowing areas and caues increasing levels of homogenisation.   this was one f the reasons why in 2008 it was decided to begin the conversion of Waterkloof to a fully-dledged biodynamic wine farm using minimally interventionist methods and equipment. This extends to using cow dung from their own cattle to make bacterial and fungal compost (e.g. preparation 500) to put life back into the soil; developing an earthworm farm using old wine barrels so as to have earthworm tea for the vegetable and herb garden; and housig their chickens in “chicken mobiles” parked in the vineyards so that they can run free through the vines eating all the vine weevils – and producing fresh organic eggs for the restaurant. Waterkloof was awarded Champion Status by the World Wildlife Fund’s Biodiversity & Wine Initiative for its efforts. 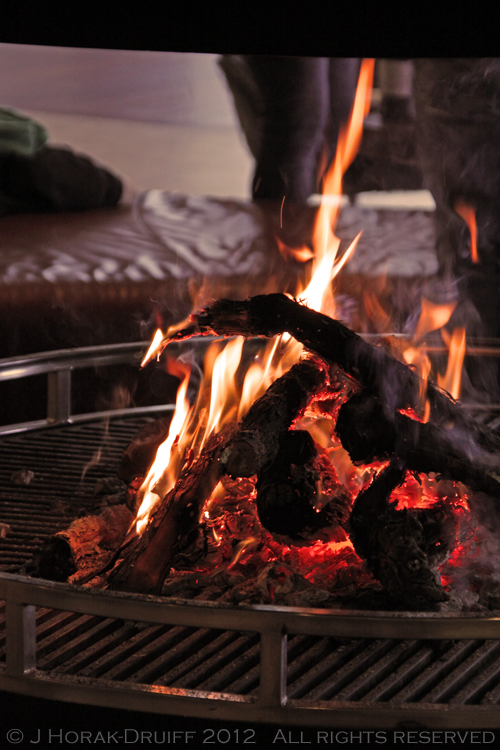 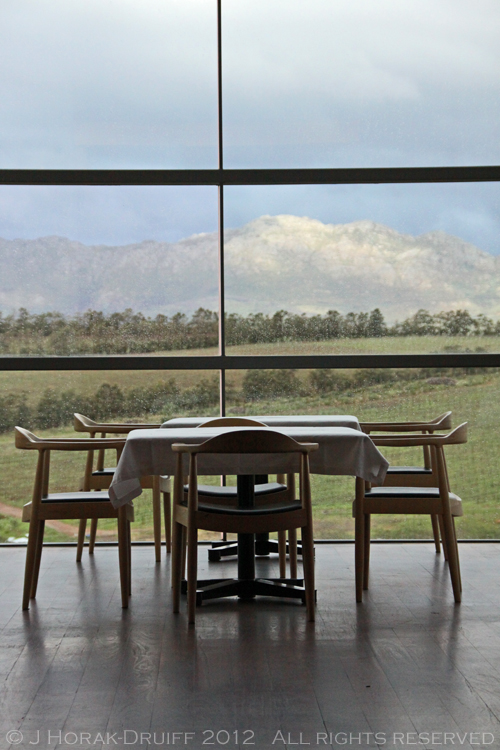 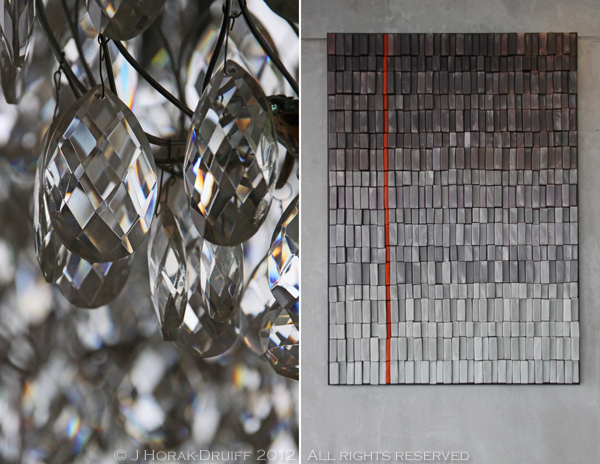 But with the weather as it was, we were definitely keen to spend more time in their state-of-the-art tasting venue rather than in the vineyards! The ultra-modern concrete and glass building (dubbed the “Cellar in the Sky” and designed by Australian firm Castle Rock Design) hangs improbably and dramatically off the hillside.  It incorporates a  triple-volume barrel maturation cellar, a state-of-the-art gravitational cellar, a modern tasting lounge and a glass box fine-dining restaurant featuring the uninterrupted mountain, vineyard and ocean views.  I particularly loved the private dining room that perched right at the very top of the building with breathtaking views; the modern chandeliers; and the interesting art that included tapestries and an intriguing 3D piece made up of blocks of red and grey wax. Given the weather, though, what interested us most was the log fire in the central fireplace!  After we had thawed out a little, we explored the building before settling down for a bit of wine tasting. 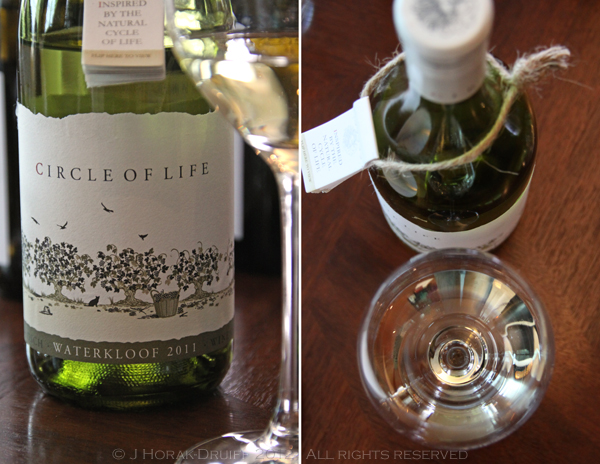 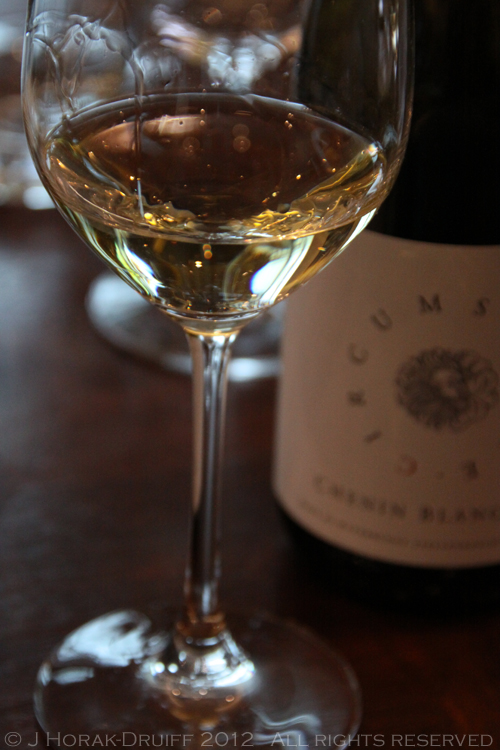 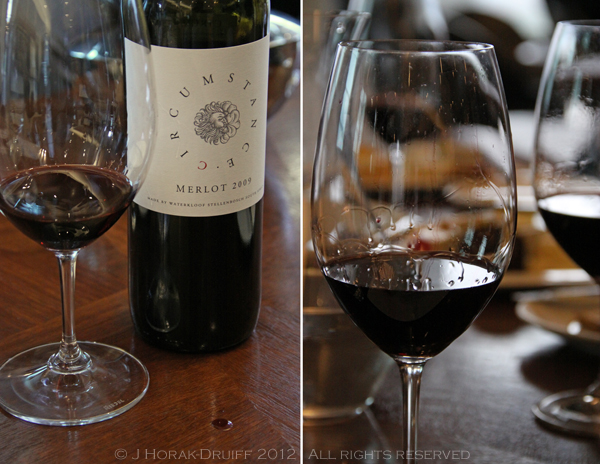 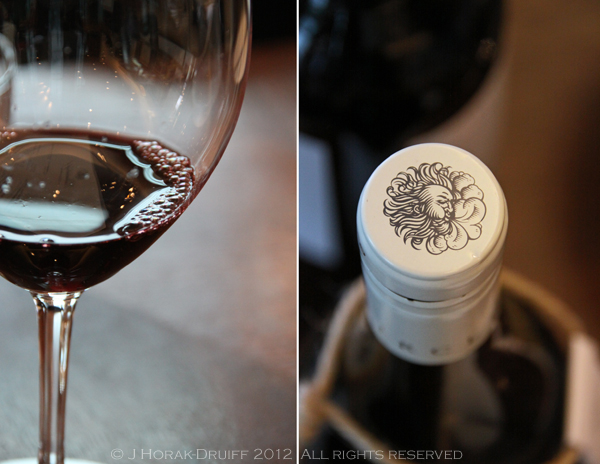 Waterkloof make three ranges of wine: Waterkloof (currently only a Sauvignon Blanc); Circle of Life; and Circumstance and we tried wines from the latter two ranges. We started with the whites: Circle of Life white 2011 (Sauv 30% , Chenin 60%, Chardonnay, Semillon) @ R120 had a slightly smoky, minerally nose, summer stone fruits on the palate, a very long finish and lovely rounded mouthfeel and flavours. This was my favourite white and also the wine that won Best White Wine at the London International Wine Fair this year.  Circumstance 2011 Chenin Blanc @ R90 was a clear pale yellow with not much fruit on the nose, but a palate like a mouthful of fresh peaches! Circumstance 2008 Chardonnay @ R90 had a buttery mouthfeel, but lovely crisp acidity; well balanced – to me, it tastes like a French Chablis. We the moved on to the reds and the Circumstance Merlot 2009 @ R140 had a nose that reminded my totally of Maynard’s wine gums (!) with a deep garnet colour, slight hints of greenness on the palate, soft tanins, a fairly light body and a medium finish. The Circumstance Syrah 2009 @ R155 had a deep ruby colour, an almost floral nose, and hints of smokiness, spice and burnt caramel on the palate with a medium finish.  The Circumstance Cab Sauv [email protected] R155 had a wonderfully deep colour and earthy, truffly flavours underlying dark berry fruit flavours and a long finish. But my favourite red was the blended Circle of Life Red 2009 @ R120 – just wow: DEEP colour, a cassis nose, big and bold on the palate with goodm supple tannins, and a hint of stemmness to balanced out the spicy vanilla finish (a medium length but very clean finish). And because Mankind cannot live by wine alone, to accompany this we also had a delicious selection of cheese including the award-winning mature Cheddar from Healy’s (which has recently been acquired by Waterkloof). Sadly, the restaurant was closed for refurbishment when we visited, but that gives me a great reason to go back and visit it next time I am in Cape Town. If you are looking to visit a biodynamic wine estate that’s not too far from Cape Town and can offer you something a little different to the traditional Cape Dutch-style tasting venue, then I can highly recommend Waterkloof.  The range of wines may not be as big or as experimental as some other estates, but the spectacular setting and the friendly staff more than make up for this.

DISCLOSURE:  Colleen and I were guests of Waterkloof Wines on this occasion – thanks Nadia for looking after us so well!