You are here: Home / Recipes / Dessert / Mirabelle plum & cardamom fool – and my thoughts on the Olympics 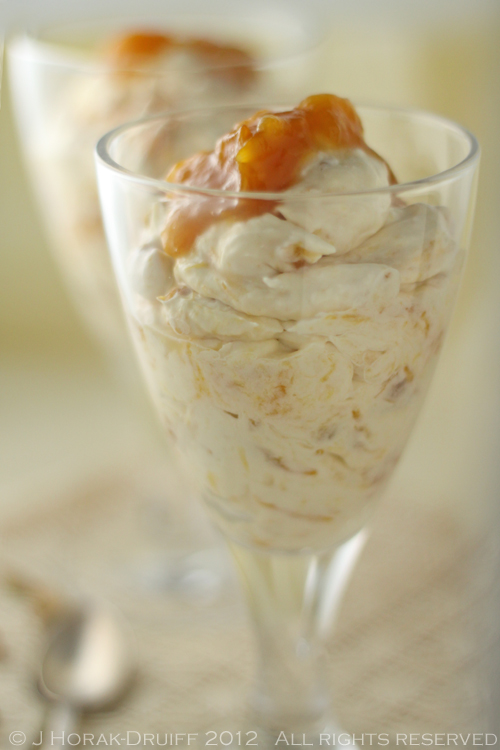 And so after all the highs, lows, drama, medals and excitement of the past two weeks, the London 2012 Summer Olympics finally drew to a close on Sunday night with a much debated but (in my opinion) dazzling closing ceremony and a huge party.  Monday morning we all felt a little dazed I think, but we were re-living the previous night’s ceremony in the morning papers and still seeing Games vehicles on every street.  Even on Tuesday we could still feel a bit of a buzz and marvel at the special terminal built at Heathrow airport and decorated like a London park, epecially for the athletes heading home. But by Wednesday, try as I might to recapture the feeling, I had to admit that the Games really were over.  The late-night mournful blast of a ship’s horn had signalled the departure of one of the two big cruise ships that have for the better part of a month been docked a few hundred metres from my house to accommodate Olympic support staff. I was surprised at how quickly it had become a much-loved part of my local skyline – and how forlorn its absence made me feel.

It’s very hard for me to put into words how the Olympics has changed the way I look at my own city.  When it was announced on 6 July 2005 that London had won its Olympic bid there was great jubilation, followed immediately by the horror and tragedy of the July 7 terrorist bombings on the London Underground. I was at Canning Town station when we were told that the Jubilee Line was suspended because of “an electrical fault”, and I remember boarding a bus and calling a friend to vent my annoyance:  “If this is how things fall apart with one little electrical fault, how will this city ever cope with the Olympic Games?”. It was an opinion repeated often over the next seven years.  We had not managed to complete the O2 Dome on time or on budget; and we did not seem to be able to run an uninterrupted Tube service on any given weekend.  The doom-mongering in the press started early and continued unabated. When the time came to bid for tickets, I told my husband that the best seats in the house would be on the sofa in front of the TV and that I had no desire to buy any tickets at all. Luckily he ignored me ;o)

And then, all of a sudden, the Games were upon us.  Living in the east end of London, we started seeing signs of preparations long before most other people: the main Olympic bus terminal being set up; the beautification of streets; and the unexpected arrival one early morning of two huge cruise ships on the Royal Albert Dock, towering over the UEL campus and lulling me to sleep with the sound of their engines at night. As I took the train from Stratford each day, I had watched the Olympic stadium arise from an abandoned industrial site, growing a little each week, and one morning there they were:  the Olympic rings on the side of the new Aquatics centre.  It was really happening. In the last few days before the Games started, you could feel the excitement in the air and I remember feeling positively carried along by it as I walked to a friend’s house in Bow on the night of the opening ceremony. On the opening weekend we attended two events (rowing and fencing)and we were duly amazed by the slickness of the logistics, the cheeriness of the games volunteers and the incredibly positive spirit of the crowds, who gamely cheered for everyone. Travelling to work each day during the Games was an adventure, with trains going to unexpected destinations and stations permanently full – but everywhere was an air of getting on with it, not drama, and that wonderful positive vibe. I saw strangers talking (usually unheard of on London transport, unless actually having an argument!); I saw volunteers posing for pictures with visitors and shaking small childrens’ hands; and I saw the station staff at Stratford forming a chorus line and giving directions en masse in an impromptu floorshow one morning. I soaked up all the positive energy and came home each night glowing with pride and buzzing with excitement.

And then there were the Games themselves.  The inexplicable rush of emotion when you sing your country’s national anthem at an Olympic event (as I did when we watched South Africa play hockey). The suprising early run of South African gold medals with South Africa’s Chad le Clos unexpectedly beating the great Michael Phelps (and Chad le Clos’s adorably proud and endearingly un-media savvy father!). The ease with which I could support both Team SA and Team GB, and take real pride in both of their successes. The total loveliness of the Olympic park with its abundant wild flower meadows, its natural river and its landscaped green hills. The heart-stopping excitement of nearly every track cycling race in the velodrome.  The heartbreak of Mark Cavendish and the triumph of Wiggo. The soul-lifting roar of the 80,000 strong crowd in the Olympic stadium as they watched the most extraordinary athletic achievements. Iconic images of Jessica Ennis’ tearful winning grin; Mo Farah’s astonished elation; Oscar Pistorius’ grace and determination; Chris Hoy’s podium tears; and Usain Bolt’s unforgettable turn as a press photographer after he defended his 200m gold title. I was riveted, from my first glimpse of the torch relay through my suburb to the final firweork of the closing ceremony. The newspapers, usually a source of depression for me, delivered a daily dose of joy for two weeks. I smiled at people on trains and they smiled back. I said a little prayer of thanks every day that I have the privilege of living in this extraordinary city at this extraordinary time. I love that we pulled it off; that we created some reasons to feel good about ourselves amidst a turbulent decade; that we produced an army of cheerful volunteers who were ambassadors for the London we all aspire to live in; and that the most important people, the athletes themselves, left having had the time of their lives. And even better, the London Paralympics are on track to be the first Paralympic Games in history to be a sell-out event.

They said we would never get the Olympic park ready on time and on budget.  They said the transport system would go into a melt-down of epic proportions as Olympic visitors and commuters battled for space in stations and on trains. They said the creaking Tube system would suffer delays and breakdowns, stranding people for hours in dark tunnels.  They said the Olympic lanes would cause traffic gridlock and prevent Londoners from going about their business. They said the Games would be a magnet for every enemy of Britain with an axe to grind, and that we faced security risks serious enough to justify having missile launchers stationed on Blackheath.  They said it would rain for two weeks solid.  They said the Games would be, at best, a mild embarrassment after Beijing’s show-stopping turn and, at worst, a disaster.

Hah.  We fooled them all.

On the topic of fools, here’s a recipe to delight anybody sitting with a glut of stone fruit at the moment: a fruit fool. Wikipedia tells me that a  foole is first mentioned as a dessert in 1598 and the earliest known recipe for fruit fool dates to the mid 17th century. Why it is called a fool is not clear, but it certainly is simple enoigh for any fool to make 🙂 It consists of a fruit puree mixed with cream, sugar and possibly a flavouring agent such as a spice.  The traditional English Summer favourite s a gooseberry fool, but it works just as well with any other slightly tart fruit – my rhubarb, ginger & cranberry fool being a good example. For my fool, I used the glut of small yellow Mirabelle plums from the neighbour’s tree which were quite tart, so I left out the ginger.  If you used sweeter plums, you might want to reduce the amount of sugar and add the ginger. And to enjoy this taste of summer all year round, make lots of the plum compote and freeze – so you can play the fool all year long! 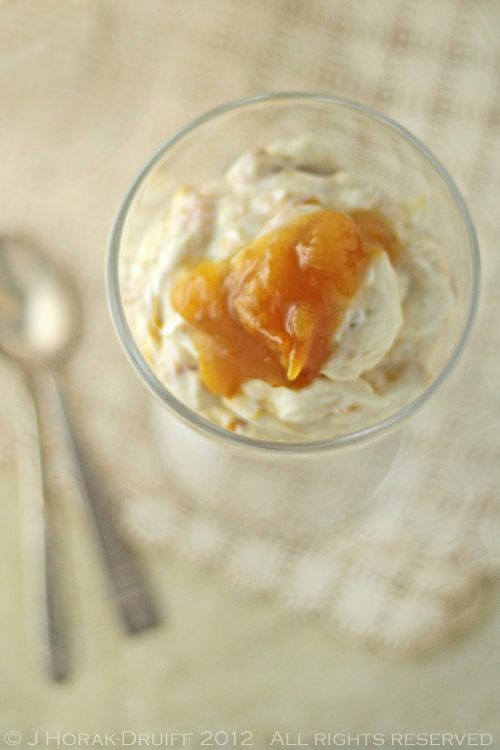 Combine the plums, ginger, sugar, brandy, cardamom and water in a small saucepan, mixing well.  Bring to the boil and then simmer gently until the plums start to disintegrate and can be mashed with a fork, and most of the liquid has evaporated – mine took a good 40 minutes or more. Remove from the heat, test for sweetmess and add more caster sugar if desired.

At this point you can use this as a compote and serve it with ice cream; add cream and meringues to make am Eton mess; or freeze the mixture for later use.

To make a fool, allow the plum mixture to cool down to at least room temperature. When cool, be sure to remove the cadramom pods and any seeds that have escaped. Whip the cream until stiff peaks form, then fold the plum mix into the cream, reserving a little of the plain plum mix for garnish.  It’s up to you whether you want visible streaks of fruit in your cream, or whether you go for the fully integrated look.  Serve in pretty glasses,  garnished with the reserved plum mixture.