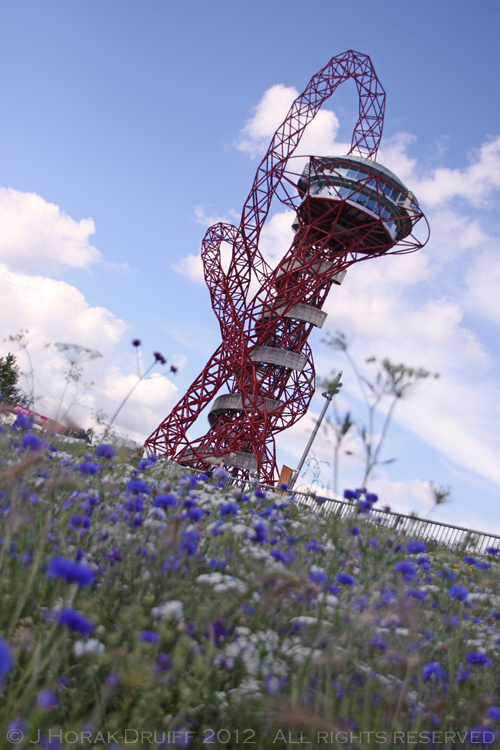 The ArcelorMittal Orbit is a 115-metre-high sculpture and observation tower in the Olympic Park in Stratford, London.  Designed by Anish Kapoor and Cecil Balmond, it is Britain’s largest piece of public art and is intended to be a permanent lasting legacy of London’s hosting of the 2012 Summer Olympics.  The project was estimated to cost £19.1 million, with £16 million coming from Britain’s richest man, the steel tycoon Lakshmi Mittal of ArcelorMittal steel company, and the balance of £3.1 million coming from the London Development Agency.  Situated between the Olympic Stadium and the Aquatics Centre it allows visitors to view the whole Olympic Park from two observation platforms. It has been both praised and criticised for its bold design – and I am still not personally convinced by it.  But it certainly does make a statement.  Read more about my visits to the London 2012 Olympic Games here.

Saturday Snapshots is a series of non-food photographs published every Saturday on CookSister.  Previously featured photographs can be viewed on the Saturday Snapshots archive page. Many photos featured in Saturday Snapshots are available to buy as high-quality greeting cards or prints in my RedBubble store, or even as high-quality A3-size calendars. If you want a custom calendar with your own selection of photos, starting with any month (not only January), please e-mail me and we can discuss your requirements.  Calendars for 2012 include FLOWERS and RAW – they make great gifts, for friends, family or for yourself.